Before start read all William Shakespeare Quotes, you can learn more about Joseph Conrad from Wikipedia.

William Shakespeare was the greatest playwright in England as well as a poet and actor. He was the national poet of the country and well known for his writing of plays. The world famous dramatist wrote collaboratively 39 plays and 154 sonnets.

Most of his  works were known to the world between 1589 and 1613 then. Not only in the field of writing as a playwright but also he got famed in London as a successful actor. The writer’s birthplace was in England and lived there until he passed away.

“Doubt thou the stars are fire, Doubt that the sun doth move. Doubt truth to be a liar, But never doubt I love.”

“Love is too young to know what conscience is.”

“We know what we are, but know not what we may be.”

“All the world's a stage, and all the men and women merely players: they have their exits and their entrances; and one man in his time plays many parts, his acts being seven ages.”

“Ignorance is the curse of God; knowledge is the wing wherewith we fly to heaven.”

“The course of true love never did run smooth.” 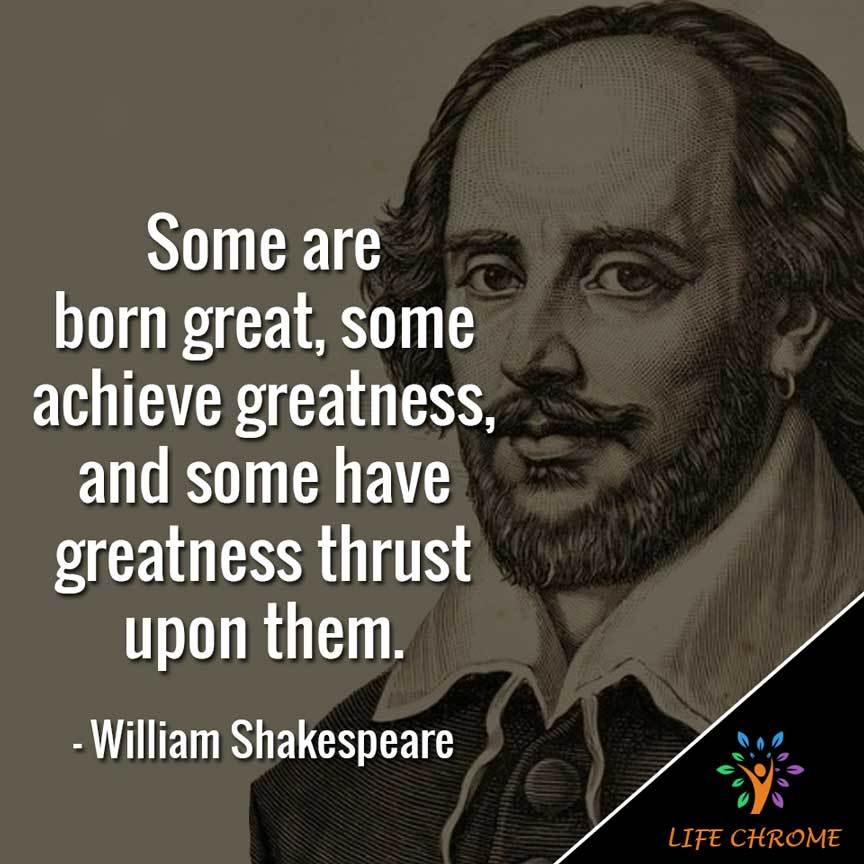 “Is this a dagger which I see before me, the handle toward my hand?”

“Whoever loved that loved not at first sight?”

“One touch of nature makes the whole world kin.”

“Full fathom five thy father lies, of his bones are coral made. Those are pearls that were his eyes. Nothing of him that doth fade, but doth suffer a sea-change into something rich and strange.”

“O! for a muse of fire, that would ascend the brightest heaven of invention.”

“Some are born great, some achieve greatness, and some have greatness thrust upon them.”

“How far that little candle throws its beams! So shines a good deed in a naughty world.”

“What is past is prologue.”

“Our doubts are traitors and make us lose the good we oft might win by fearing to attempt.”

“There is a tide in the affairs of men, Which taken at the flood, leads on to fortune. Omitted, all the voyage of their life is bound in shallows and in miseries. On such a full sea are we now afloat. And we must take the current when it serves, or lose our ventures.”

“Love looks not with the eyes, but with the mind, And therefore is winged Cupid painted blind.”

Beware the Ides of March.

“This life, which had been the tomb of his virtue and of his honour, is but a walking shadow; a poor player, that struts and frets his hour upon the stage, and then is heard no more: it is a tale told by an idiot, full of sound and fury, signifying nothing.”

“Though she be but little, she is fierce.”

“The evil that men do lives after them; the good is oft interred with their bones.”

“Hell is empty and all the devils are here.”

“Get thee to a nunnery.”

“When words are scarce they are seldom spent in vain.”

“No legacy is so rich as honesty.”

“Cowards die many times before their deaths; the valiant never taste of death but once.”

“What's in a name? That which we call a rose by any other name would smell as sweet.”

“To thine own self be true, and it must follow, as the night the day, thou canst not then be false to any man.” 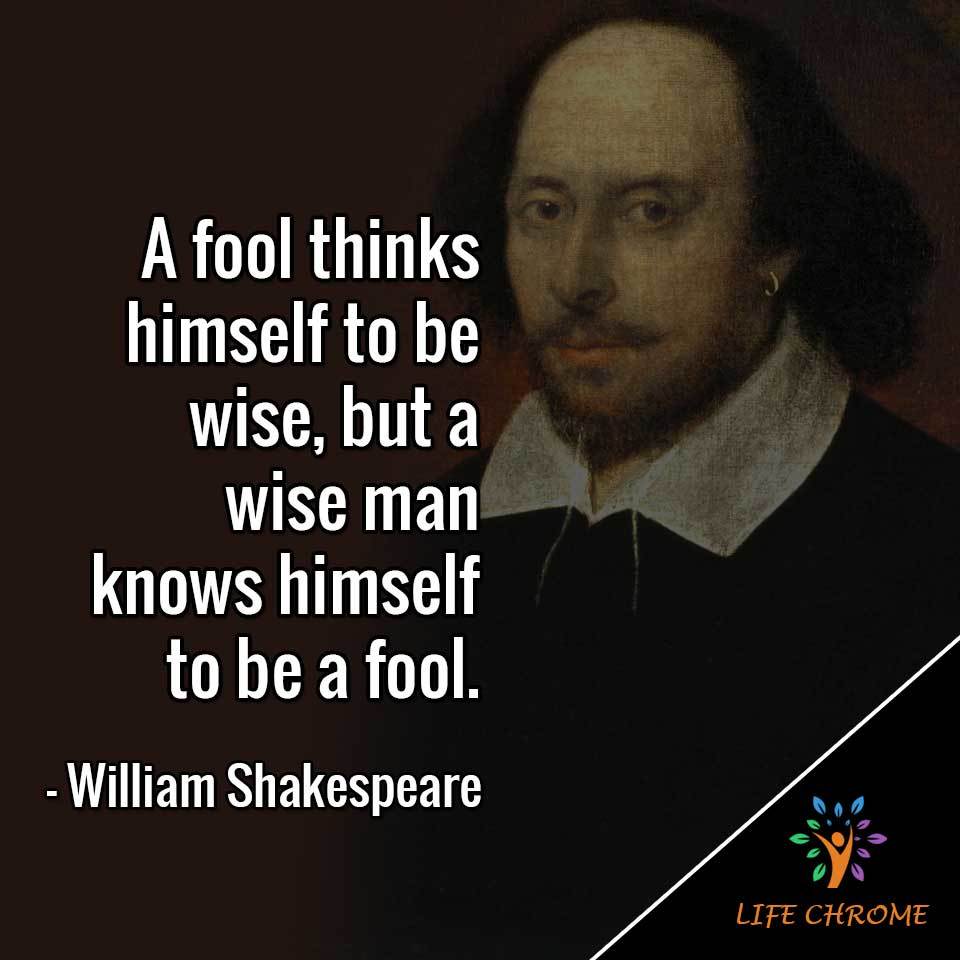 “Love sought is good, but given unsought, is better.”

“What may man within him hide, though angel on the outward side!”

“The robbed that smiles, steals something from the thief.”

“The very substance of the ambitious is merely the shadow of a dream.”

“God has given you one face, and you make yourself another.”

“If it be a sin to covet honor, I am the most offending soul.”

“When we are born we cry that we are come to this great stage of fools.”

“We cannot conceive of matter being formed of nothing, since things require a seed to start from... Therefore there is not anything which returns to nothing, but all things return dissolved into their elements.”

“As merry as the day is long.”

“What a piece of work is a man, how noble in reason, how infinite in faculties, in form and moving how express and admirable, in action how like an angel, in apprehension how like a god.”

“We are such stuff as dreams are made on; and our little life is rounded with a sleep.”

“Talking isn't doing. It is a kind of good deed to say well; and yet words are not deeds.”

“Love is a smoke made with the fume of sighs.”

“There is nothing either good or bad but thinking makes it so.” 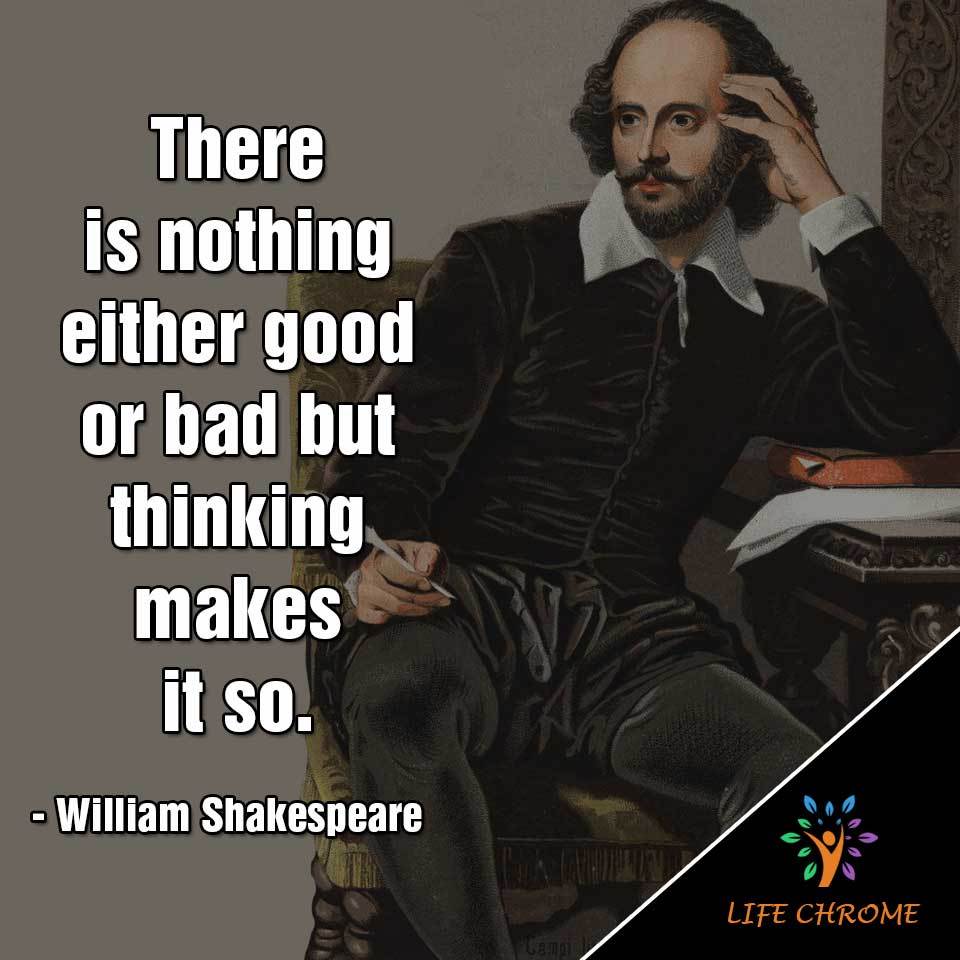 “By heaven, methinks it were an easy leap to pluck bright honor from the pale-faced moon, or dive into the bottom of the deep, where fathom-line could never touch the ground, and pluck up drowned honor by the locks.”

“Better three hours too soon than a minute too late.”

“Some Cupid kills with arrows, some with traps.”

“My crown is called content, a crown that seldom kings enjoy.”

“A man loves the meat in his youth that he cannot endure in his age.”

“Sweet are the uses of adversity which, like the toad, ugly and venomous, wears yet a precious jewel in his head.”

“There is no darkness but ignorance.”

“They do not love that do not show their love.”

“Now, God be praised, that to believing souls gives light in darkness, comfort in despair.”

“Uneasy lies the head that wears a crown.”

“Like as the waves make towards the pebbl'd shore, so do our minutes, hasten to their end.”

“Teach not thy lip such scorn, for it was made For kissing, lady, not for such contempt.”

“Good night, good night! Parting is such sweet sorrow, that I shall say good night till it be morrow.” 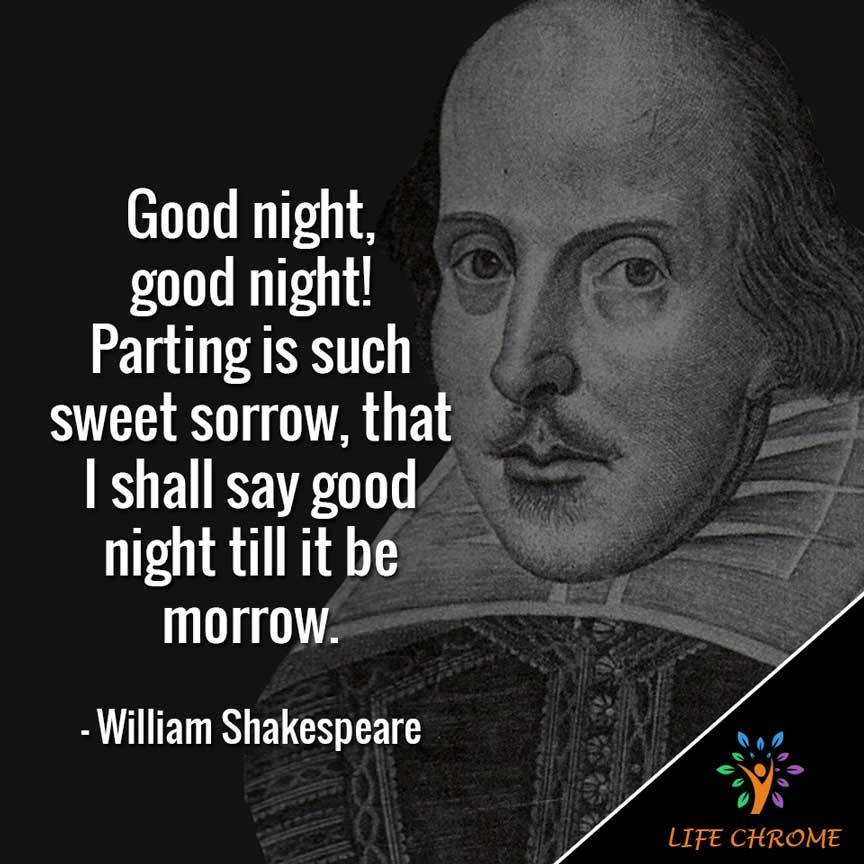 “Brevity is the soul of wit.”

“And this, our life, exempt from public haunt, finds tongues in trees, books in the running brooks, sermons in stones, and good in everything.”

“I am a man more sinned against than sinning.”

“How poor are they that have not patience! What wound did ever heal but by degrees?”

“By that sin fell the angels.”

“If you can look into the seeds of time, and say which grain will grow and which will not, speak then unto me.”

“Give every man thy ear, but few thy voice.”

“I had rather have a fool to make me merry than experience to make me sad and to travel for it too!”

“The love of heaven makes one heavenly.”

“Give me my robe, put on my crown; I have Immortal longings in me.”

“Better a witty fool than a foolish wit.”

“Love is not love that alters when it alteration finds.”

“It is not in the stars to hold our destiny but in ourselves.” 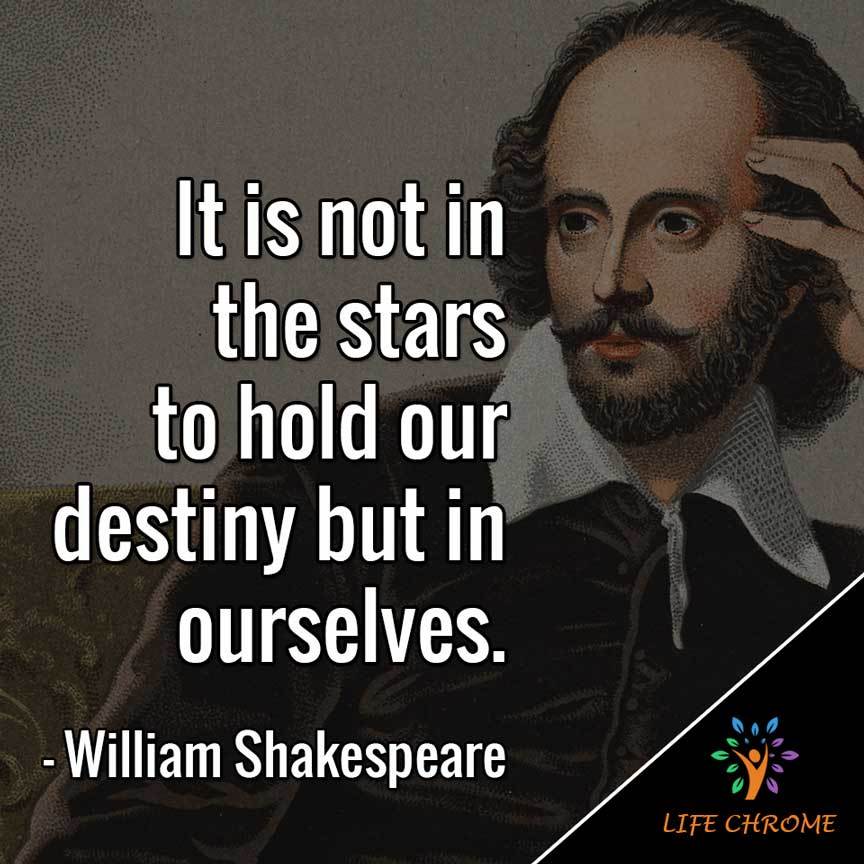 “Women may fall when there's no strength in men.”

“Life is as tedious as twice-told tale, vexing the dull ear of a drowsy man.”

“Tis not enough to help the feeble up, but to support them after.”

“I hold the world but as the world, Gratiano; A stage where every man must play a part, And mine is a sad one.”

“To do a great right do a little wrong.”

“If music be the food of love, play on.”

“The lunatic, the lover, and the poet, are of imagination all compact.”

“Nothing can come of nothing.”

“There's no art to find the mind's construction in the face.”

“And oftentimes excusing of a fault doth make the fault the worse by the excuse.”

“The most peaceable way for you, if you do take a thief, is, to let him show himself what he is and steal out of your company.”

“We have seen better days.”

“Lawless are they that make their wills their law.”

“All that glitters is not gold.”

“Suit the action to the word, the word to the action.”

“It is the stars, The stars above us, govern our conditions.”

“The man that hath no music in himself, Nor is not moved with concord of sweet sounds, is fit for treasons, stratagems and spoils.”

“I see that the fashion wears out more apparel than the man.”

“But men are men; the best sometimes forget.”

“I bear a charmed life.”

“Some rise by sin, and some by virtue fall.”

“Reputation is an idle and most false imposition; oft got without merit, and lost without deserving.”

“I were better to be eaten to death with a rust than to be scoured to nothing with perpetual motion.”

“False face must hide what the false heart doth know.”

“Our peace shall stand as firm as rocky mountains.”

“Most dangerous is that temptation that doth goad us on to sin in loving virtue.”