Before start reading all best Walt Disney quotes, you can learn more about Walt Disney from Wikipedia if you don't know too much about this legend.

Laughter is America’s most important export.

That’s the real trouble with the world. Too many people grow up.

There is more treasure in books than in all the pirate’s loot on Treasure Island.

A man should never neglect his family for business.

The era we are living in today is a dream of coming true.

Somehow I can’t believe that there are any heights that can’t be scaled by a man who knows the secrets of making dreams come true. This special secret, it seems to me, can be summarized in four C s. They are curiosity, confidence, courage, and constancy.

There is great comfort and inspiration in the feeling of close human relationships and its bearing on our mutual fortunes – a powerful force, to overcome the “tough breaks” which are certain to come to most of us from time to time.

Leadership means that a group, large or small, is willing to entrust authority to a person who has shown judgment, wisdom, personal appeal, and proven competence.

Do what you do so well that they want to see it again and bring their friends.

The worst of us is not without innocence, although buried deeply it might be. 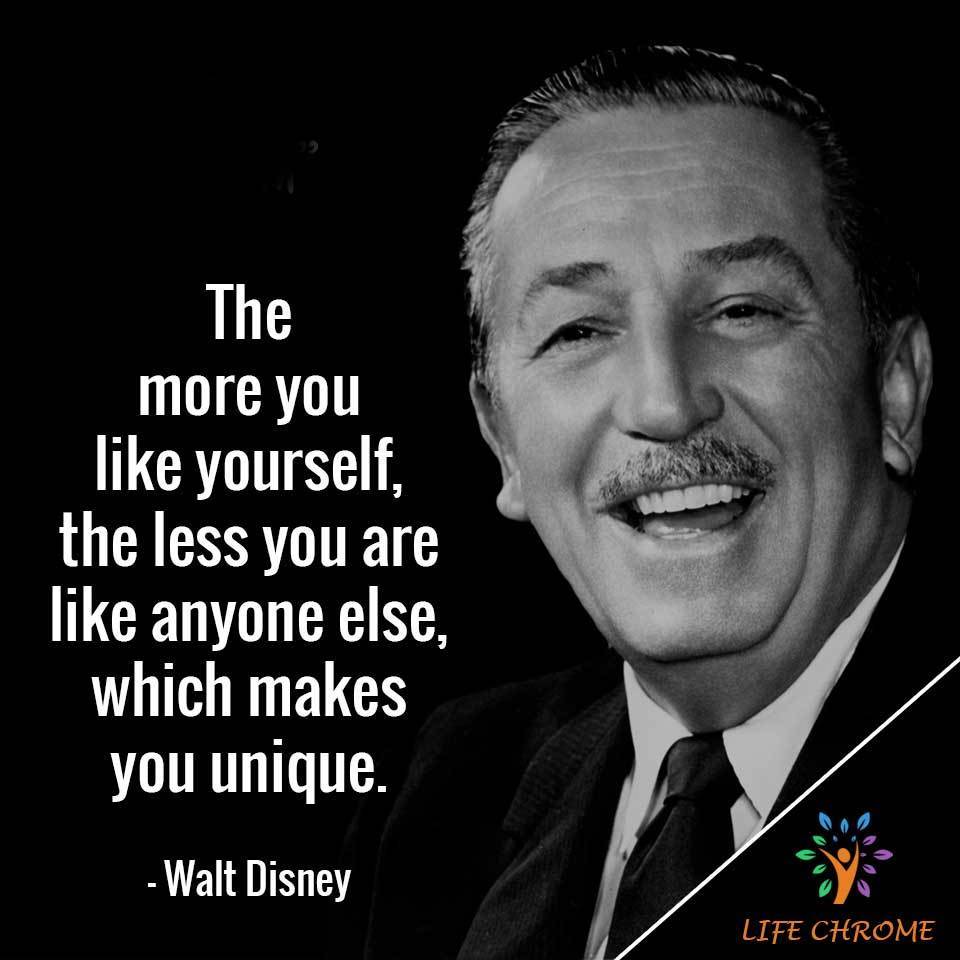 Faith is the most important thing. If you believe in something, believe it till the end, unequivocally and without hesitation.

There’s nothing funnier than the human animal.

Never forget! You can design, create, and build the most wonderful place in the world.But it takes people to make a dream a reality.

Laughter is timeless, imagination has no age, dreams are forever.

Our heritage and ideals, our code and standards – the things we live by and teach our children – are preserved or diminished by how freely we exchange ideas and feelings.

You reach a point where you don’t work for money.

I always like to look on the optimistic side of life, but I am realistic enough to know that life is a complex matter.

The important thing is the family. If you can keep the family together — and that’s the backbone of our whole business, catering to families — that’s what we hope to do.

For every laugh, there should be a tear.

Do a good job. You don’t have to worry about the money; it will take care of itself. Just do your best work — then try to trump it.

When you believe in a thing, believe in it all the way, implicitly and unquestionable.

A person should set his goals as early as he can and devote all his energy and talent to getting there. With enough effort, he may achieve it. Or he may find something that is even more rewarding. But in the end, no matter what the outcome, he will know he has been alive.

All the adversity I’ve had in my life, all my troubles and obstacles, have strengthened me… You may not realize it when it happens, but a kick in the teeth may be the best thing in the world for you.

Why worry? If you’ve done the very best you can, worrying won’t make it any better.

If you can dream it, you can do it. 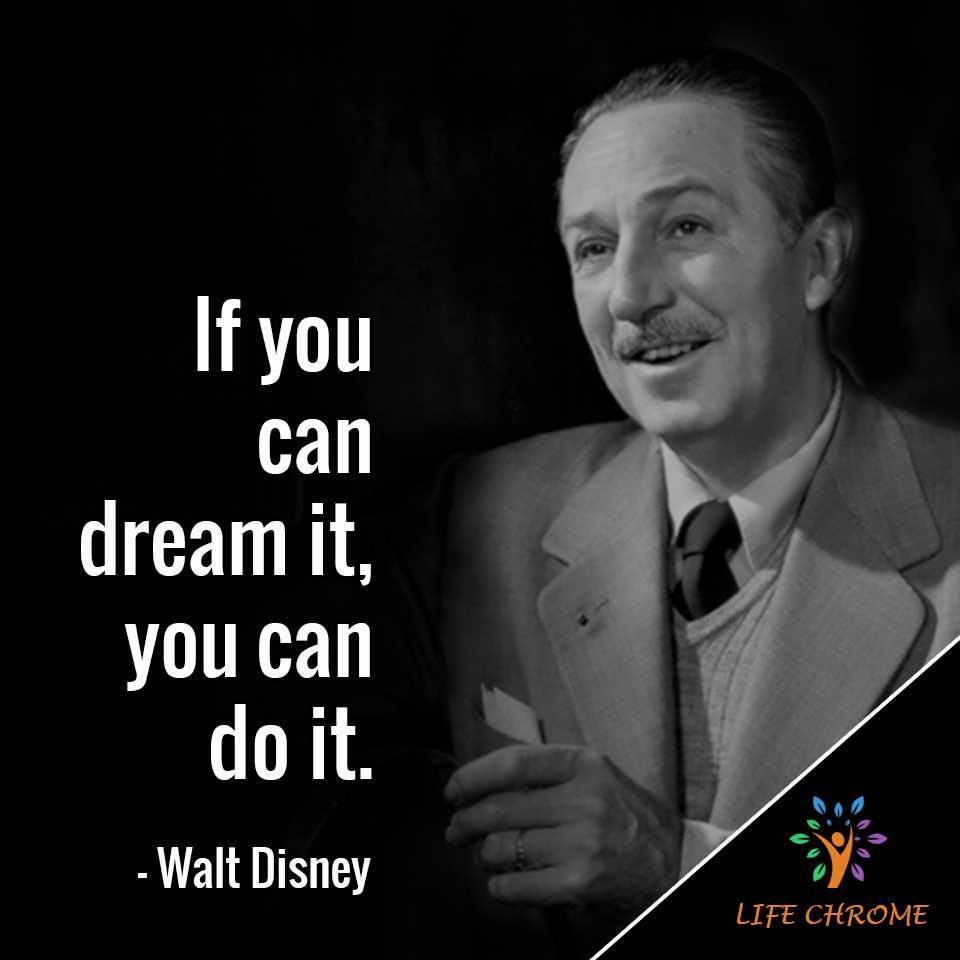 All you’ve got to do is own up to your ignorance honestly, and you’ll find people who are eager to fill your head with information.

Get a good idea and stay with it. Dog it, and work at it until it’s done right.

The difference between winning and losing is most often not quitting.

Whatever you do, do it well.

Never get bored or cynical. Yesterday is a thing of the past.

Everyone falls down. Getting back up is how you learn how to walk.

Courage is the main quality of leadership, in my opinion, no matter where it is exercised. Usually it implies some risk — especially in new undertakings. Courage to initiate something and to keep it going, pioneering and adventurous spirit to blaze new ways, often, in our land of opportunity.

People often ask me if I know the secret of success and if I could tell others how to make their dreams come true. My answer is, you do it by working.

It’s kind of fun to do the impossible.

When you’re curious, you find lots of interesting things to do. And one thing it takes to accomplish something is courage.

You must not let anyone define your limits because of where you come from. Your only limit is your soul.

All our dreams can come true, if we have the courage to pursue them. 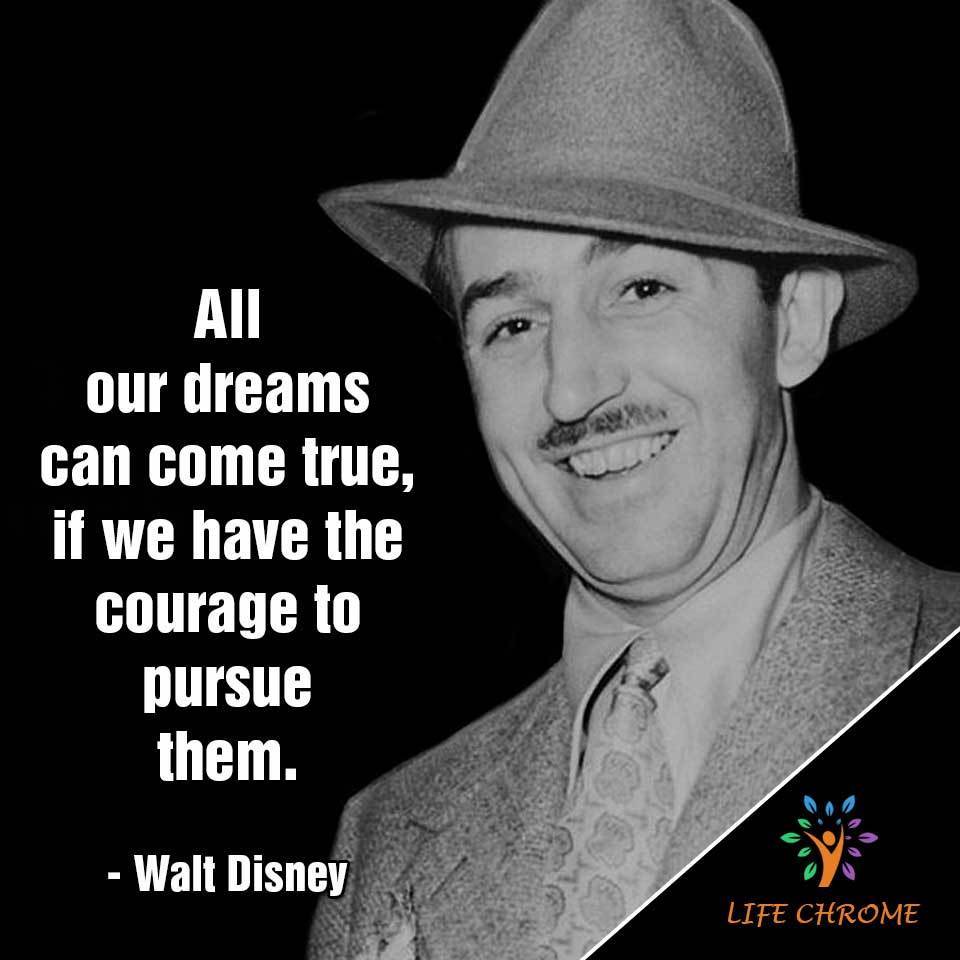 That’s the real trouble with the world, too many people grow up. They forget.

Crowded classrooms and half-day sessions are a tragic waste of our greatest national resource – the minds of our children.

Children are people, and they should have to reach to learn about things, to understand things, just as adults have to reach if they want to grow in mental stature.

Our greatest natural resource is the minds of our children.

I didn’t treat my own youngsters like fragile flowers, and I think no parent should.

I do not make films primarily for children. I make them for the child in all of us, whether he be six or sixty. Call the child innocence.

I don’t believe in playing down to children, either in life or in motion pictures.

I have long felt that the way to keep children out of trouble is to keep them interested in things.

The way to get started is to quit talking and begin doing. 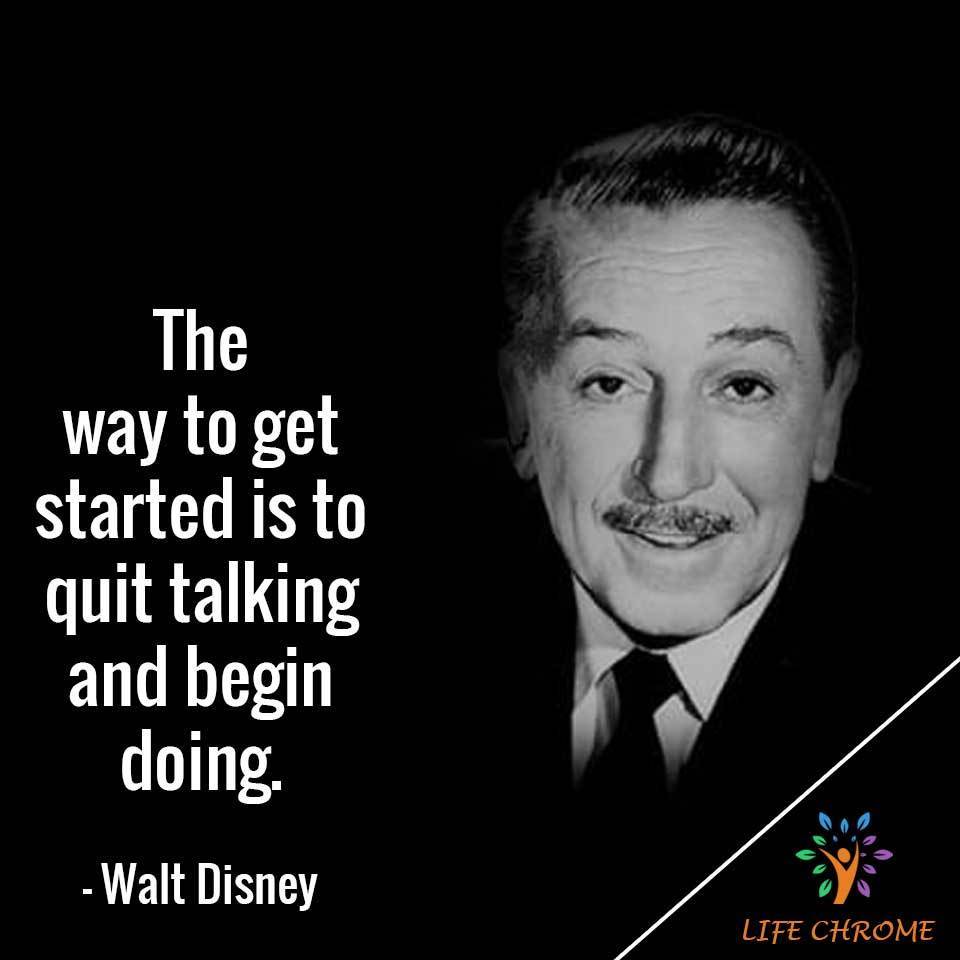 Why do we have to grow up? I know more adults who have the children’s approach to life. They’re people who don’t give a hang what the Jones’ do. You see them at Disneyland every time you go there. They are not afraid to be delighted with simple pleasures, and they have a degree of contentment with what life has brought – sometimes it isn’t much, either.

You’re dead if you aim only for kids. Adults are only kids grown up, anyway.

Animation is different from other parts. Its language is the language of caricature. Our most difficult job was to develop the cartoon’s unnatural but seemingly natural anatomy for humans and animals.

Every child is born blessed with a vivid imagination. But just as a muscle grows flabby with disuse, so the bright imagination of a child pales in later years if he ceases to exercise it.

It’s a mistake not to give people a chance to learn to depend on themselves while they are young.

Animation offers a medium of story telling and visual entertainment which can bring pleasure and information to people of all ages everywhere in the world.

In our animation we must show only the actions and reactions of a character, but we must picture also with the action. . . the feeling of those characters.

All cartoon characters and fables must be exaggeration, caricatures. It is the very nature of fantasy and fable.

Animation can explain whatever the mind of man can conceive. This facility makes it the most versatile and explicit means of communication yet devised for quick mass appreciation.

I try to build a full personality for each of our cartoon characters – to make them personalities.

I think a good study of music would be indispensable to the animators — a realization on their part of how primitive music is, how natural it is for people to want to go to music — a study of rhythm, the dance — the various rhythms enter into our lives every day. 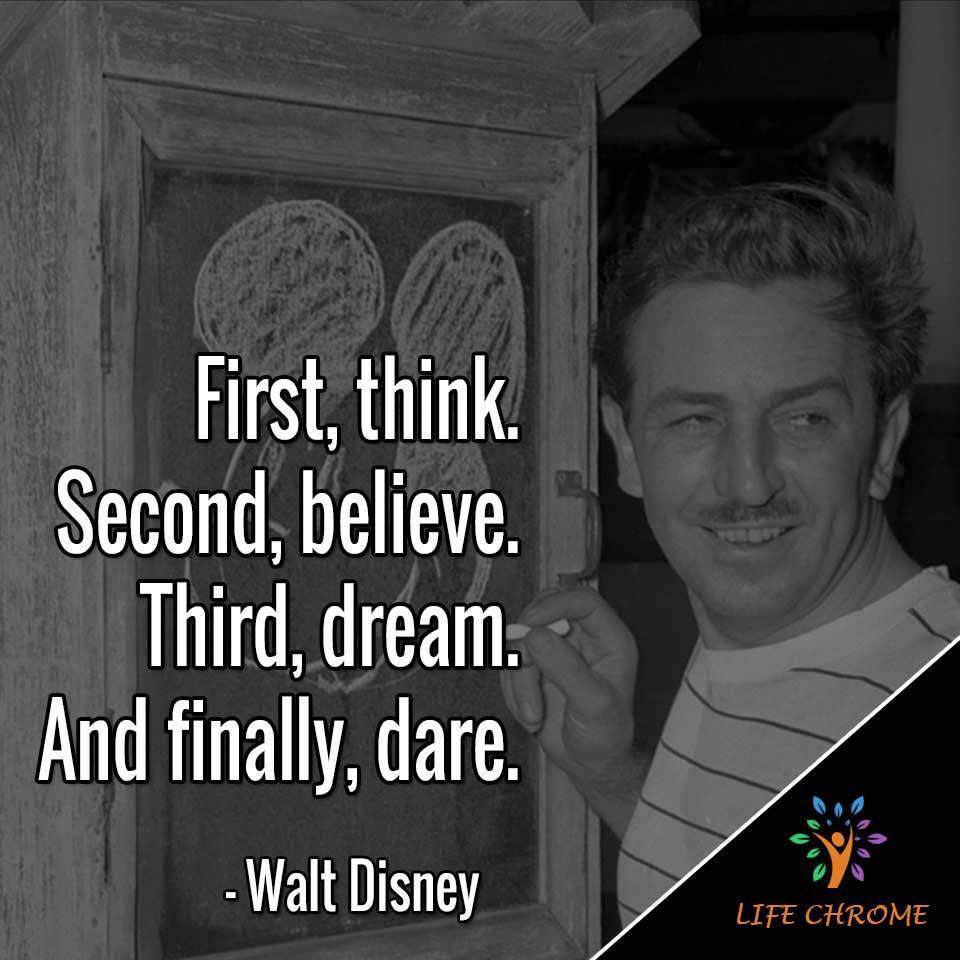 I think you have to know these fellows definitely before you can draw them. When you start to caricature a person, you can’t do it without knowing the person. Take Laurel and Hardy for example; everybody can see Laurel doing certain things because they know Laurel.

Of all of our inventions for mass communication, pictures still speak the most universally understood language.

I love Mickey Mouse more than any woman I have ever known.

Mickey Mouse is, to me, a symbol of independence. He was a means to an end.

When people laugh at Mickey Mouse, it’s because he’s so human; and that is the secret of his popularity.

Mickey Mouse popped out of my mind onto a drawing pad 20 years ago on a train ride from Manhattan to Hollywood at a time when business fortunes of my brother Roy and myself were at lowest ebb and disaster seemed right around the corner.

I only hope that we don’t lose sight of one thing – that it was all started by a mouse.

Disneyland will never be completed. It will continue to grow as long as there is imagination left in the world.

Disneyland is the star, everything else is in the supporting role.

We did it Disneyland, in the knowledge that most of the people I talked to thought it would be a financial disaster – closed and forgotten within the first year.

Disneyland is a show.

I could never convince the financiers that Disneyland was feasible, because dreams offer too little collateral.

You can dream, create, design and build the most wonderful place in the world, but it requires people to make the dream a reality.

I don’t want the public to see the world they live in while they’re in the Park (Disneyland). I want to feel they’re in another world.

Disneyland is a work of love. We didn’t go into Disneyland just with the idea of making money.