Who doesn't know about the Usain Bolt. He is the Jamaican #1 Athlete and most popular in recent times. Usain Bolt quotes are also equally popular.

Do you want to know more about him? You can learn from Wikipedia.

In today's post, we are covering Usain Bolt quotes about his success, failure and training experiences. Let's start:

If I get to be a legend, I've achieved my goal.

Manners is the key thing. Say, for instance, when you're growing up, you're walking down the street, you've got to tell everybody good morning. Everybody. You can't pass one person.

I'd like to say to all my fans out there, thanks for the support. And to all my doubters, thank you very much because you guys have also pushed me.

When people see your personality come out, they feel so good, like they actually know who you are.

Yeah, I am lazy. There's no doubt about that.

I think they have not learned over the years that the more you talk, the more I will want to beat you.

There are better starters than me but I'm a strong finisher.

You have good days and bad days.

I think my acceleration is very good. That's the key for me.

My name is Bolt, Lightning Bolt.

For me, I'm focused on what I want to do. I know what I need to do to be a champion, so I'm working on it.

It's always a wake-up call to get beaten.

My brother is really, really slow.

I work hard, and I do good, and I'm going to enjoy myself. I'm not going to let you restrict me. 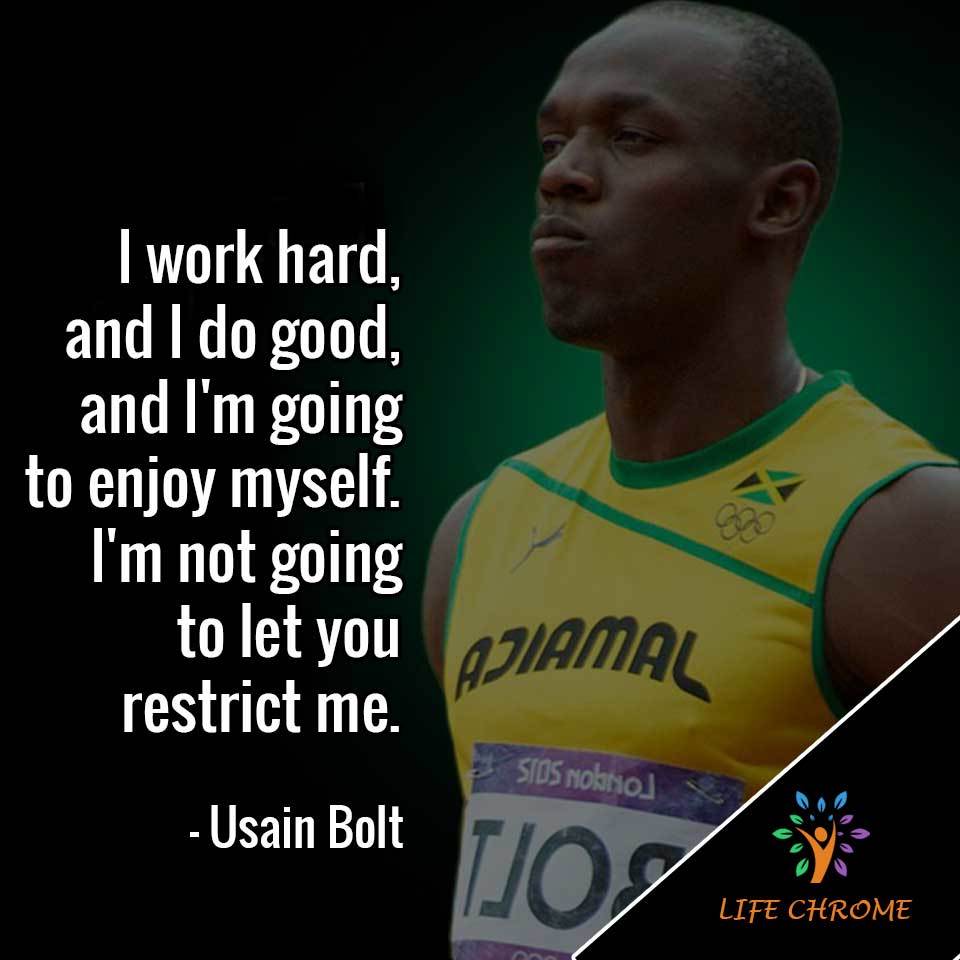 I was playing cricket first and my cricket coach was the one that introduced me to track and field.

Repeating is harder than anything else.

I know what I can do so it doesn't bother me what other people think or their opinion on the situation.

All I have to do is to work on transition and technique.

I don't know the history of my sport. I'm not like those people who know everything.

I will run against anybody.

I know what to do and I go and execute.

People always say I'm a legend, but I'm not. Not until I've defended my Olympic titles. That's when I've decided I'll be a legend.

Each training session I'm getting better and better. I have no other duties now, no worries, it's all about training, eating and sleeping. I have a lot more time and can put a lot more effort into training. I'm feeling better every day. As long as I'm feeling myself I'm definitely in no doubt I can go to the Olympics and win.

As long as I'm in great shape, nobody beats me, for sure.

Easy is not an option. No days off. Never Quit. Be Fearless. Talent you have Naturally. Skill is only developed by hours and hours of work. 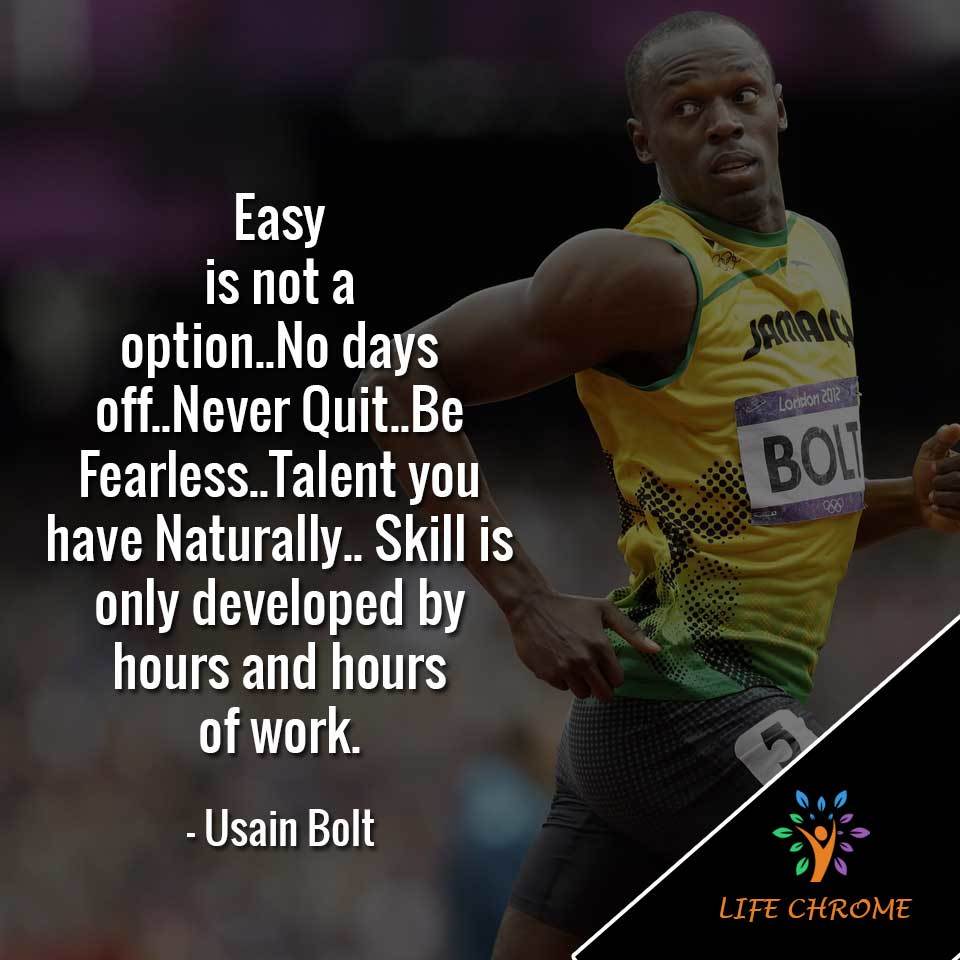 You do not want to get married at 22! Especially if you're famous, because girls are going to be throwing themselves at you.

But if I keep my core and back strong, the scoliosis doesn't really bother me.

But anybody who steps into the lane beside you is the biggest competition because they made it to the finals.

Sometimes you lose sight of what's going on around you.

Track and field was very big when I was growing up.

Where I'm from, there is no violence, pretty much.

I can't really live outside Jamaica. I can be away, but only for a while.

If you're the Olympic champion then they have to wait four more years to get you again.

If you think about racing too much you may just lose it a little bit.

There are things that bother me. I try not to let them, but they do.

Kill them with success and bury them with a smile. 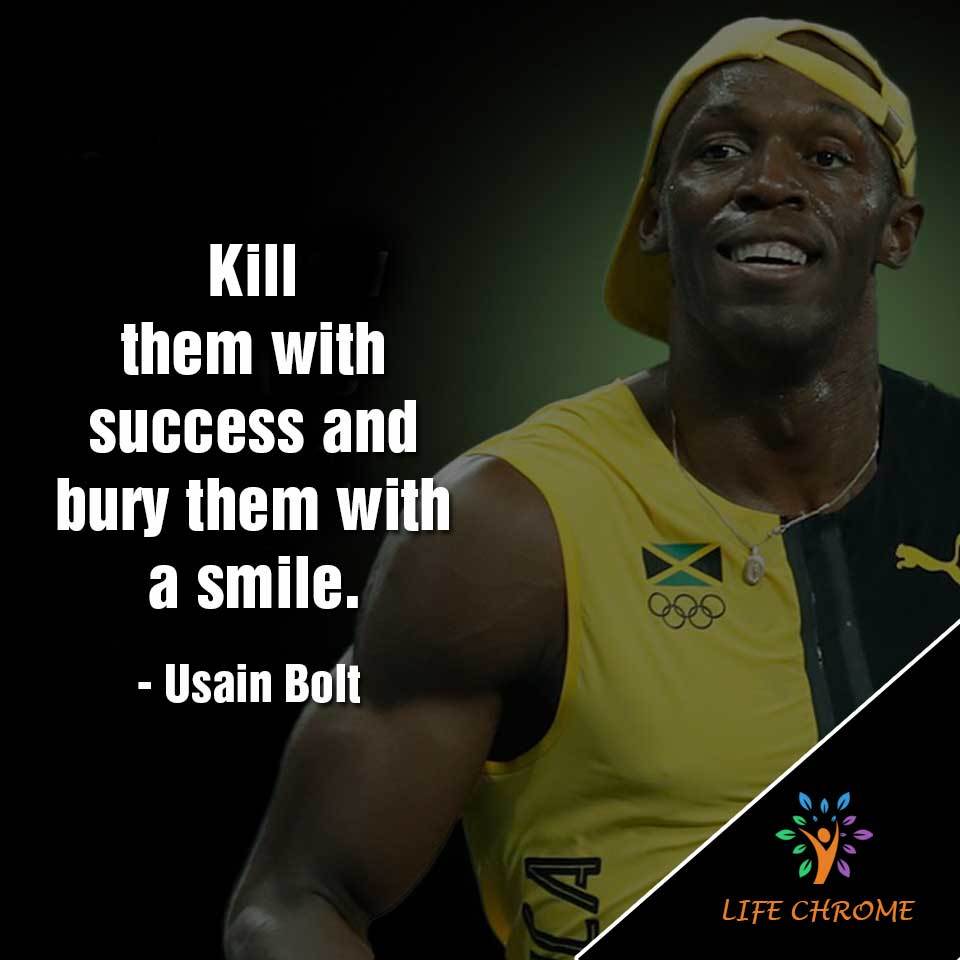 I wouldn't say I'm a phenomenon, just a great athlete.

I just want to push the barriers and see what I can do and how far I can go. I am just determined and driven.

If Queen Elizabeth knighthooded me and I would get the title Sir Usain Bolt. That sounds very nice.

I don't put myself under pressure.

It's a great feat for me to have broken my world record.

You can get beat any day.

I don't even like to go out onto the streets sometimes because I can't get anything done. People want pictures and autographs all the time.

I am doing what I do [athletics] because the fans love it and it's a part of me, it's my personality. I think people come to see you run fast, but they also come to see a show, a performance. They want to see a personality, and that's what I give them.

I definitely know I'm going to be working a lot more with my foundation when it comes to developing the kids in Jamaica.

I really want to try soccer after I retire because I've watched football over the years and I think I could be a good contender.

My coach keeps telling me to say I'm not going to retire. I should just go through the motions and see what I feel every year and see if I really want to do it, but personally, I want to do it, but my coach says just take your time, don't rush.

I just imagine all the other runners are big spiders, and then I get super scared. 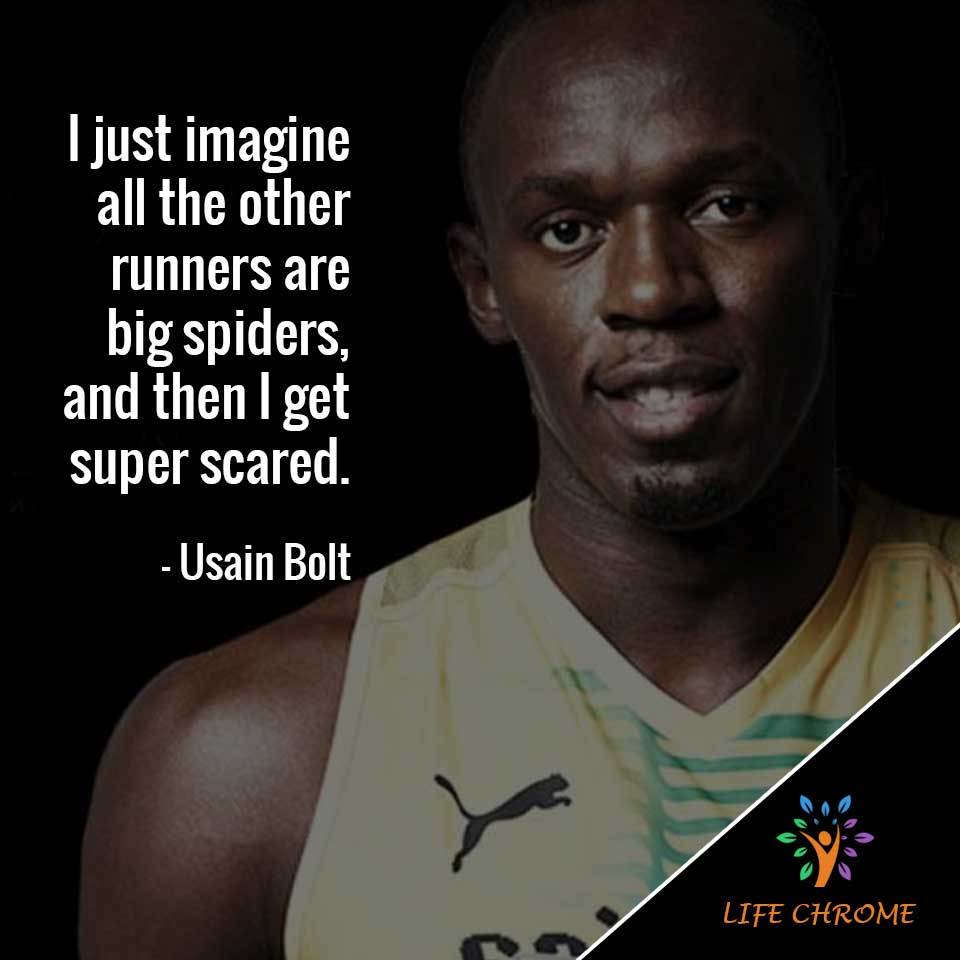 No matter how far you get ahead of me, I’m gonna catch you. That’s my mentality that I go there with.

One thing I’ve learned over the years from my core set, the LAST ONE (set) is the most important one. Because THAT’S WHEN you start improving. THAT’S WHEN the work pays off now. Because your legs are DEAD and you gotta push your body. It’s like moving past a barrier.

Dreams are free. Goals have a cost. While you can daydream for free, goals don’t come without a price. Time, Effort, Sacrifice, and Sweat. How will you pay for your goals?

Worrying gets you nowhere. If you turn up worrying about how you’re going to perform, you’ve already lost. Train hard, turn up, run your best and the rest will take care of itself.

I know what I can do, so I never doubt myself.