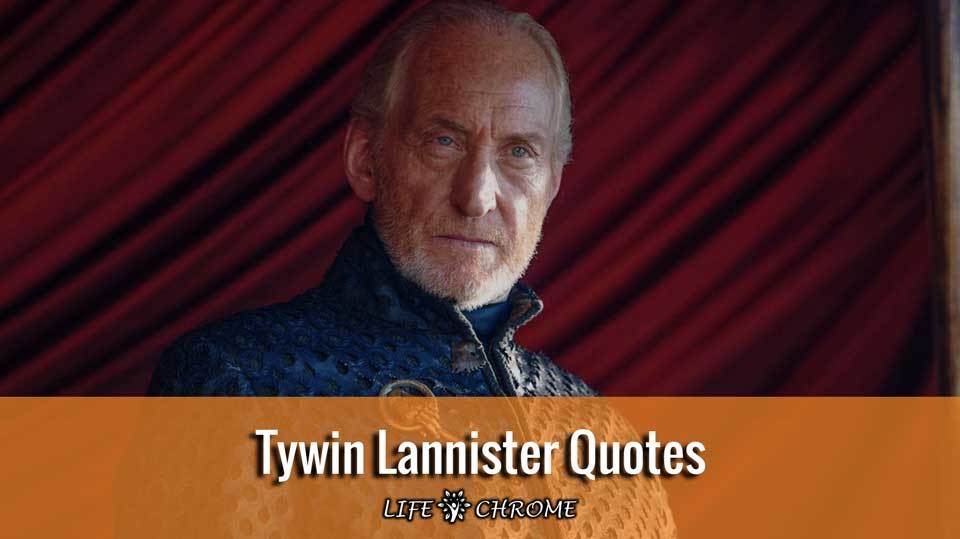 Never forget what you are, the rest of the world will not. Wear it like armor and it can never be used to hurt you.

What did I tell you about calling your sister the devil?

And for an instant she stared directly into those soft blue eyes and knew, with an instinctive mammalian certainty, that the exceedingly rich were no longer even remotely human.

I think we may have broke Tyrion.

Any man who says, 'I am the king' is no true king. 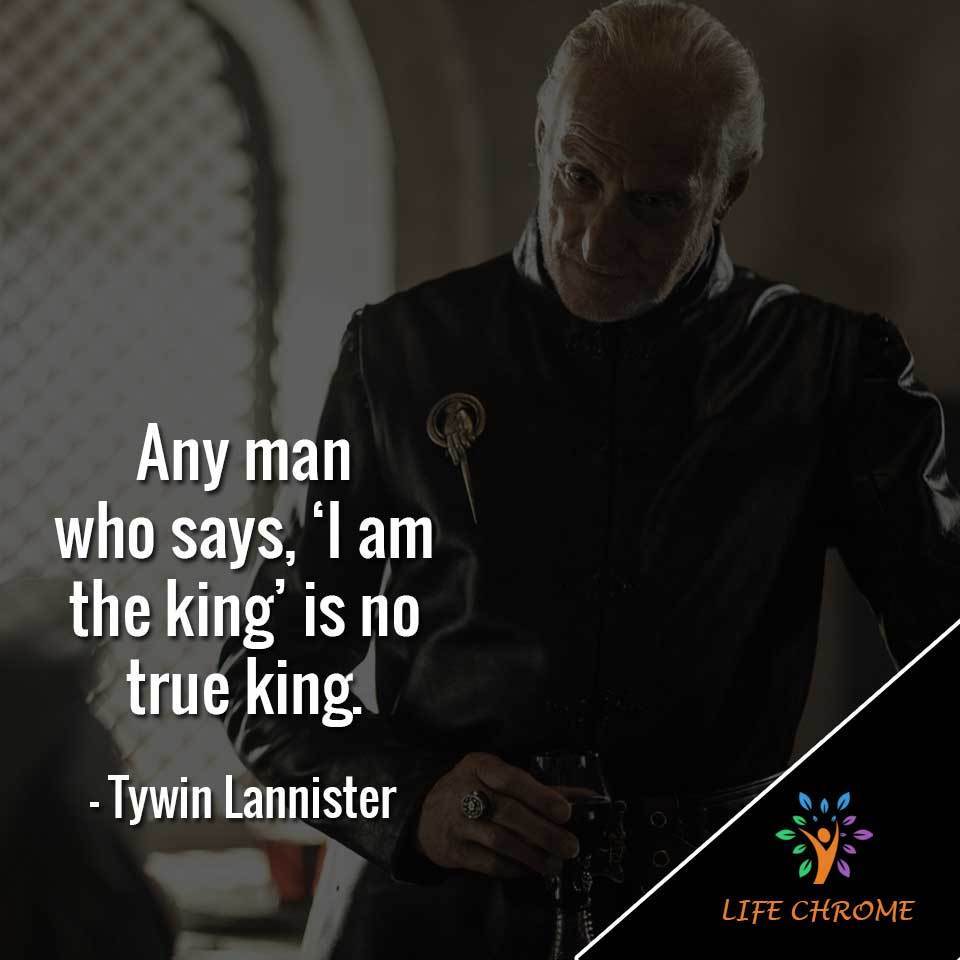 Broke me? Nah, come on, I'm good. I love all this. This is great. I'm gonna pop out for a little while.

He's not loving it.

Your new job is with my sworn enemy?

I can’t keep track of all your sworn enemies!

I’m gonna ask you to be respectful here.

Ser Kevan seldom “had a thought” that Lord Tywin had not had first.

No man is free, only children and fools think else wise.

Some battles are won with swords and spears, Other with quills and ravens.

A lion doesn’t concern himself with the opinions of the sheep. 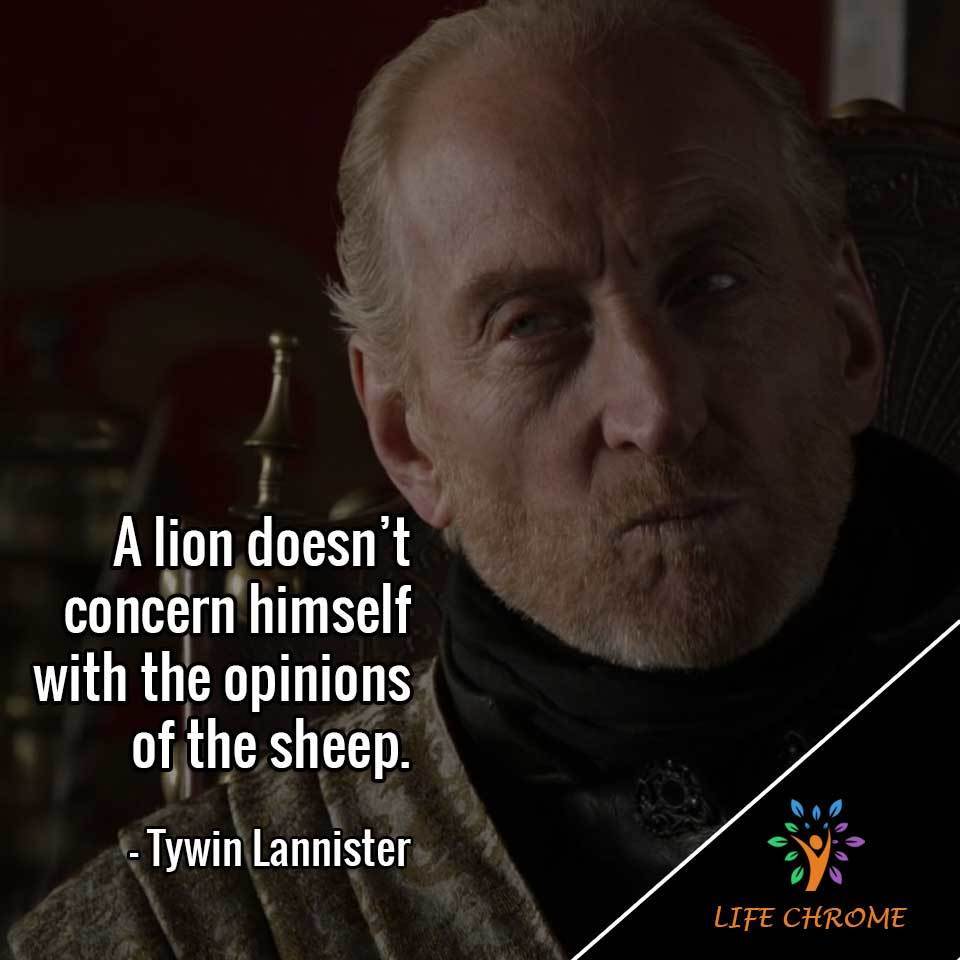 The badge looks good on you. Almost as good as it looked on me.

Am I enjoying it?

I was very happy as Hand of the King.

Yes. I heard how happy you were. You brought a whore into my bed.

It wasn't your bed at the time.

I sent you here to advise the king. I gave you real power and authority. You chose to spend your days as you always have, bedding harlots and drinking with thieves.

Occasionally I drank with the harlots.

What do you want, Tyrion? 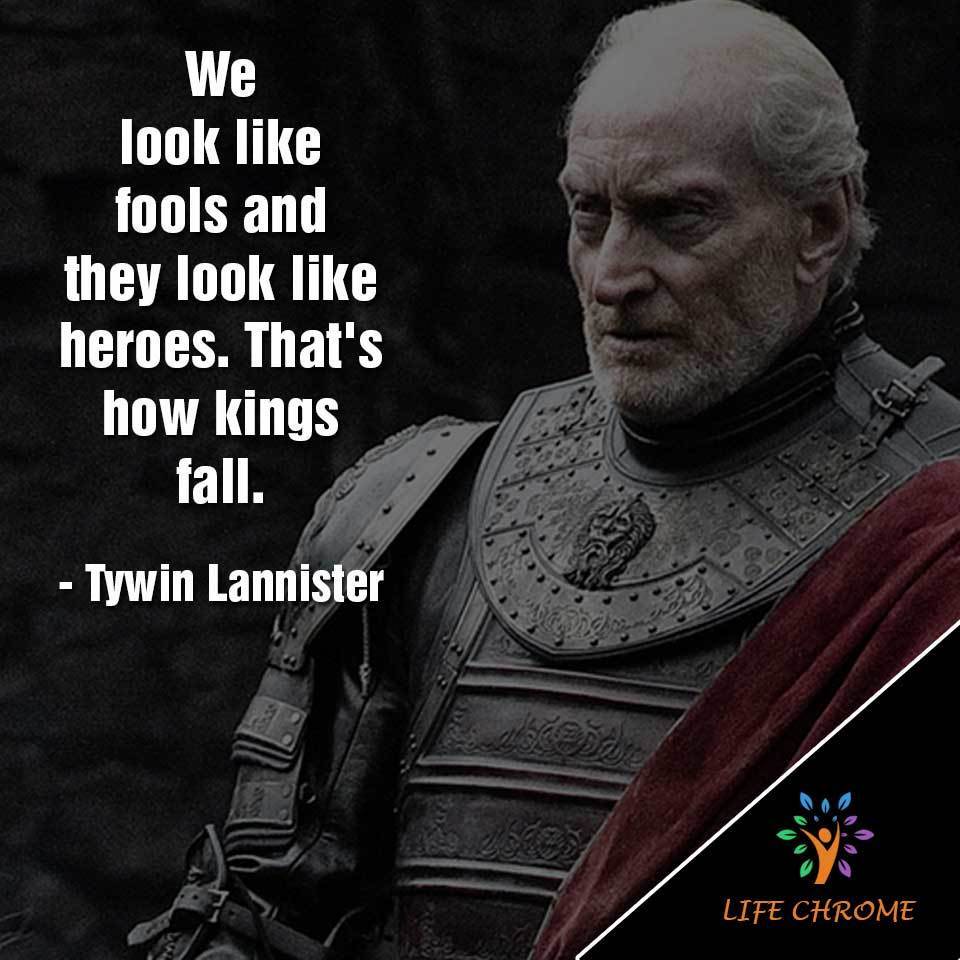 Why does everyone assume I want something? Can't I simply visit with my beloved father? My beloved father who somehow forgot to visit his wounded son after he fell on the battlefield.

Maester Pycelle assured me your wounds were not fatal.

I organized the defense of this city while you held court in the ruins of Harrenhal. I led the foray when the enemies were at the gate while your grandson, the king, quivered in fear behind the walls. I bled in the mud for our family. And as my reward, I was trundled off to some dark little cell. But what do I want? A little bloody gratitude would be a start.

Jugglers and singers require applause. You are a Lannister. Do you think I demanded a garland of roses every time I suffered a wound on a battlefield? Hmm? Now, I have seven kingdoms to look after and three of them are in open rebellion. So tell me what you want.

I want what is mine by right. Jaime is your eldest son, heir to your lands and titles. But he is a Kingsguard, forbidden from marriage or inheritance. The day Jaime put on the white cloak, he gave up his claim to Casterly Rock. I am your son and lawful heir.

It is mine by right.

We'll find you accommodations more suited to your name and as a reward for your accomplishments during the battle of Blackwater Bay. And when the time is right, you will be given a position fit for your talents so that you can serve your family and protect our legacy. And if you serve faithfully, you will be rewarded with a suitable wife. And I would let myself be consumed by maggots before mocking the family name and making you heir to Casterly Rock.

Why? You ask that? You, who killed your mother to come into the world? You are an ill-made, spiteful little creature full of envy, lust, and low cunning. Men's laws give you the right to bear my name and display my colors since I cannot prove that you are not mine. And to teach me humility, the gods have condemned me to watch you waddle about wearing that proud lion that was my father's sigil and his father's before him. But neither gods nor men will ever compel me to let you turn Casterly Rock into your whorehouse. Go, now. Speak no more of your rights to Casterly Rock. Go. [Tyrion walks away] Oh, one more thing. The next whore I catch in your bed I'll hang.

The greatest fools are ofttimes more clever than the men who laugh at them. 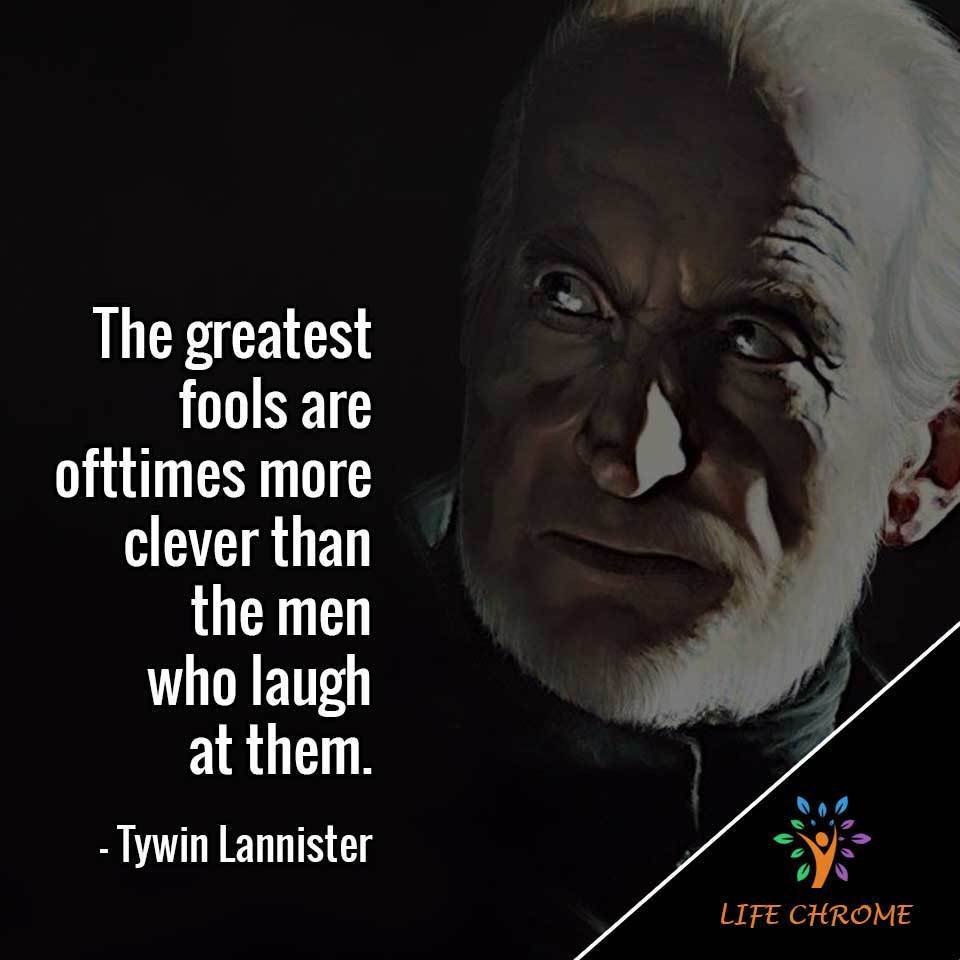 The lion does not concern himself with the opinions of the sheep.[pause] I suppose I should be grateful your vanity got in the way of your recklessness. [pause] I'm giving you half of our forces-thirty thousand men. You will bring them to Catelyn Stark's girlhood home and remind her that Lannisters pay their debts!

I didn't know you put such a high value on my brother's life.

He's a Lannister. He might be the lowest of the Lannisters, but he is one of us. And every day that he remains a prisoner, the less our name commands respect.

So, the lion does concern himself with the opinions.

It's not an opinion, it's a fact! If another house can seize one of our own, and hold him captive with impunity, it means we're no longer a house to be feared! Your mother's dead, before long I'll be dead, and you...and your brother and your sister and all of her children. All of us dead, all of us rotting in the ground. It's the family name that lives on. It's all that lives on. Not your honor, not your personal glory, family.

You're blessed with abilities that few men possess. You're blessed to belong to the most powerful family in the Kingdoms, and you're still blessed with youth. And what have you done with these blessings? You've served as a glorified bodyguard for two kings, one a madman, the other a drunk. The future of our family will be determined in these next few months. We could establish a dynasty that will last a thousand years...or we could collapse into nothing, as the Targaryens did. I need you to become the man you were always meant to be. Not next year, not tomorrow...now.

A mind needs books like a sword needs a whetstone.

I have to disagree. Death is so final, yet life is full of possibilities.

I have a tender spot in my heart for cripples and bastards and broken things.

I try to know as many people as I can. You never know which one you’ll need.

You are done with whores. The next one I find in your bed, I'll hang.

We’ve had vicious kings and we’ve had idiot kings, but I don’t know if we’ve ever been cursed with a vicious idiot boy king!

It’s easy to confuse ‘what is’ with ‘what ought to be,’ especially when ‘what is’ has worked out in your favor.

I need you to become the man you were always meant to be. Not next year, not tomorrow, now. 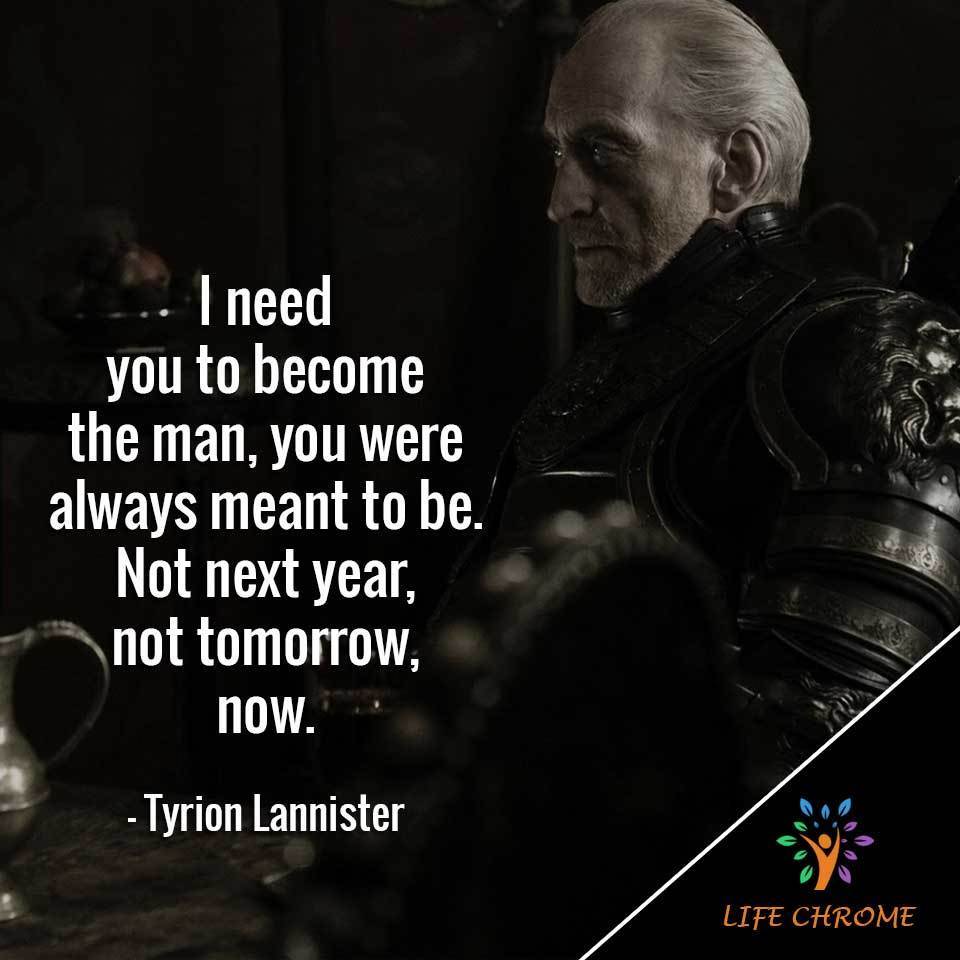 Of course we are. Just because I pay you for your services doesn’t diminish our friendship.

In my experience eloquent men are right every bit as often as imbeciles.

It’s hard to put a leash on a dog once you’ve put a crown on its head.

Of course it’s a joke, just not a very funny one.

Every time we deal with an enemy, we create two more

Oh, “monster.” Perhaps you should speak to me more softly then. Monsters are dangerous and, just now, kings are dying like flies.

It’s not easy being drunk all the time. If it were easy, everyone would do it.

You cannot eat love, nor buy a horse with it, nor warm your halls on a cold night.

A king who runs will not be king for long.

And any man who must say ‘I am the king’ is no true king at all.

Every once in a very long while, Lord Tywin Lannister would actually threaten to smile; he never did, but the threat alone was terrible to behold.

A fool more foolish than most had once jested that even Lord Tywin’s shit was flecked with gold. Some said the man was still alive, deep in the bowels of Casterly Rock.