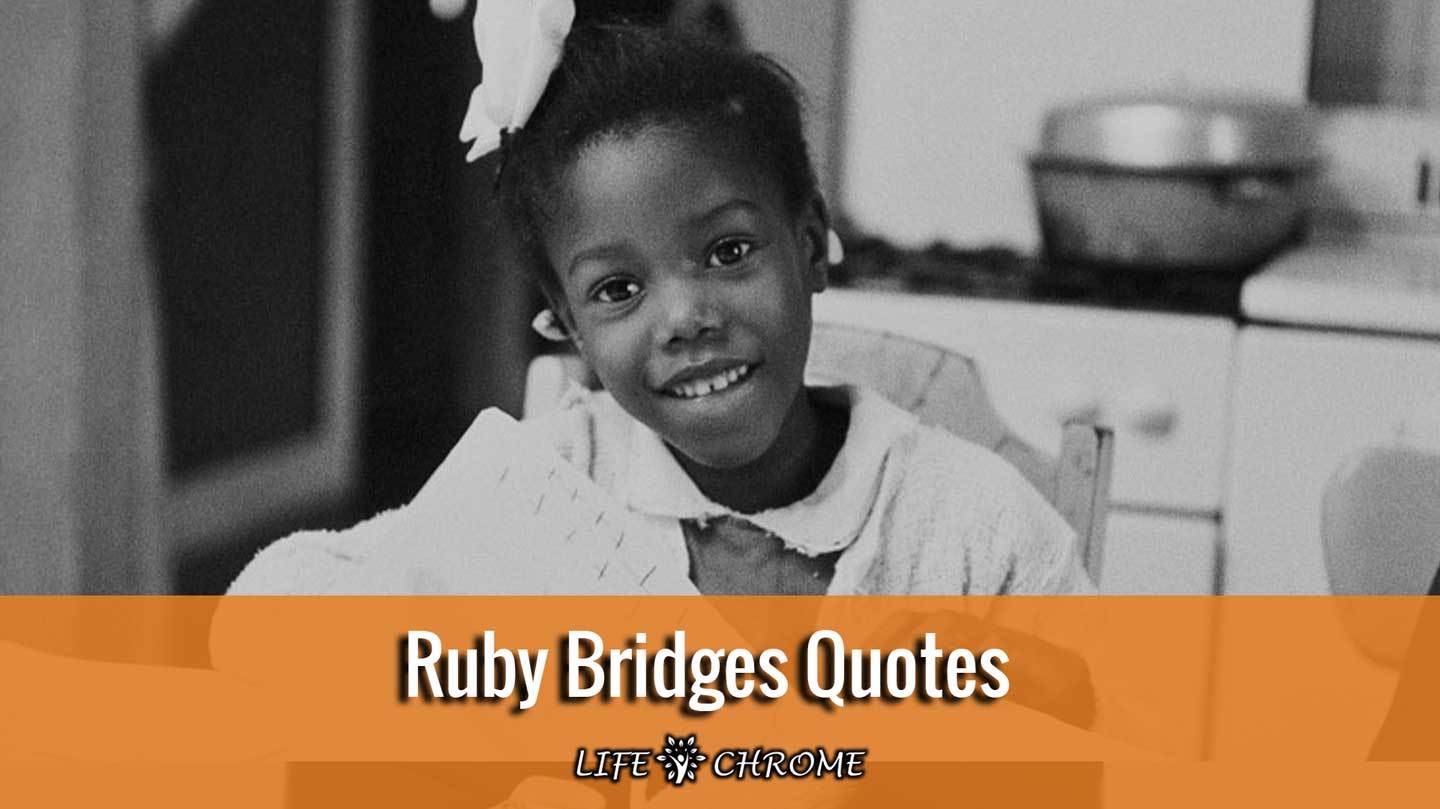 ​Each and every one of us is born with a clean heart. Our babies know nothing about hate or racism. But soon they begin to learn – and only from us. We keep racism alive. We pass it on to our children. We owe it to our children to help them keep their clean start.

I now know that experience comes to us for a purpose, and if we follow the guidance of the spirit within us, we will probably find that the purpose is a good one.

Don't follow the path. Go where there is no path and begin the trail. 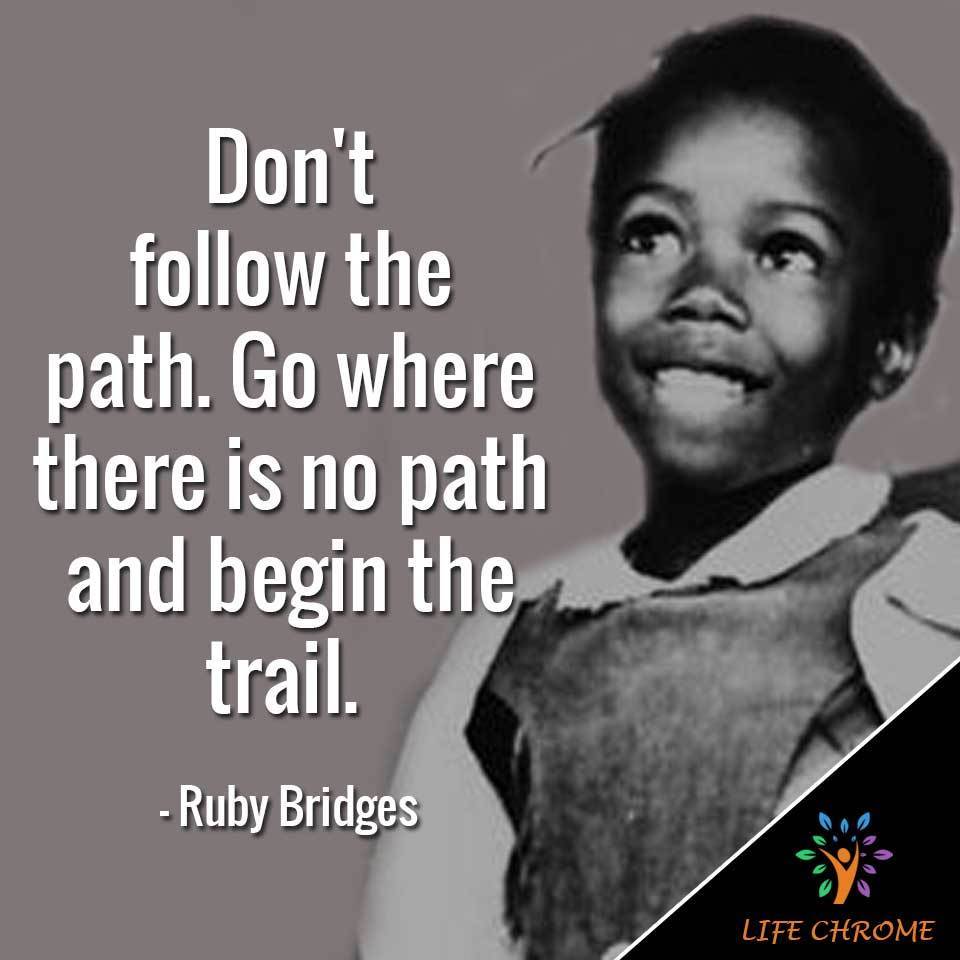 Racism is something that we, as adults, have kept alive. We pass it on to our kids. None of our kids come into the world knowing anything about disliking one another.

Don't follow the path. Go where there is no path and begin the trail. When you start a new trail equipped with courage, strength and conviction, the only thing that can stop you is you!

That first morning I remember mom saying as I got dressed in my new outfit, 'Now, I want you to behave yourself today, Ruby, and don't be afraid. There might be a lot of people outside this new school, but I'll be with you.

[Ruby Bridges] just marched along like a little soldier.

My mother said to me, 'Ruby, if I'm not with you and you're afraid, then always say your prayers.

My message is really that racism has no place in the hearts and minds of our children. 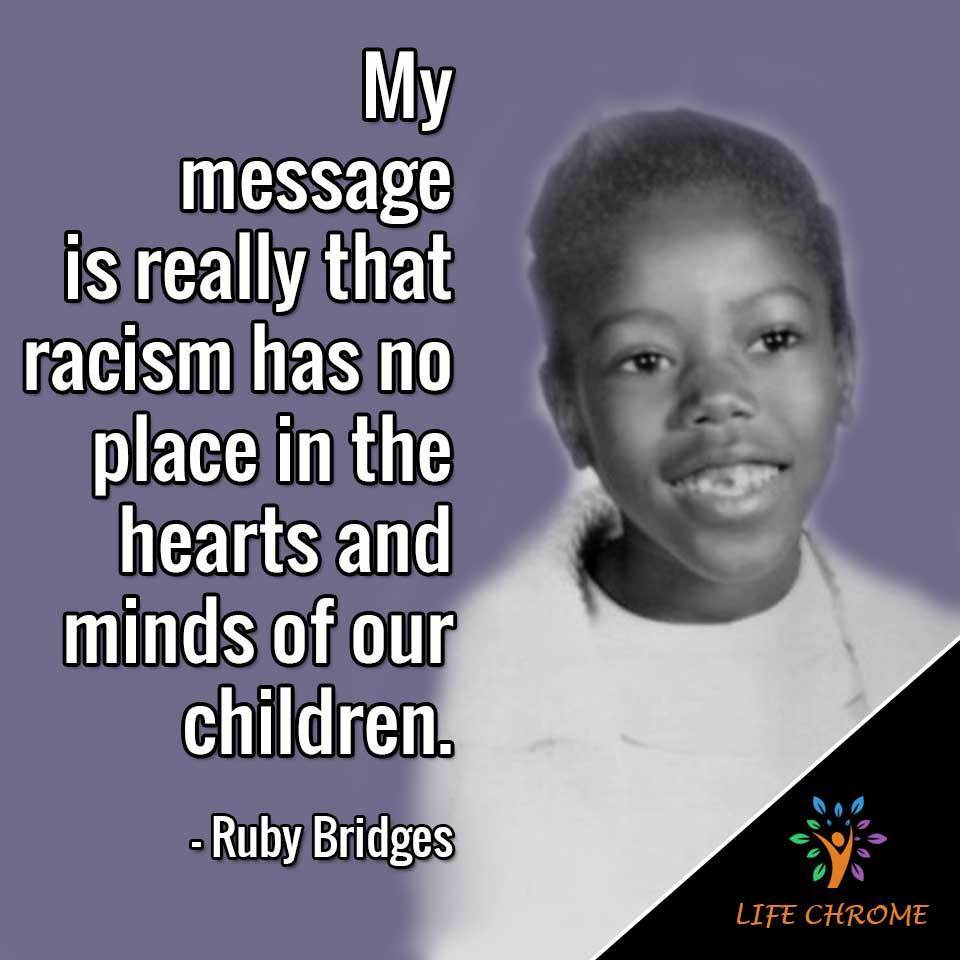 There were lots of people outside, and they were screaming and shouting and the police officers. But I thought it was Mardi Gras, you know, I didn't know that all of that was because of me.

The only bad thing about burning your bridges behind you is that the world is round.

It looked like diamonds, rubies, emeralds; he could think of nothing beautiful which it did not resemble.

Kids know nothing about racism. They're taught that by adults. 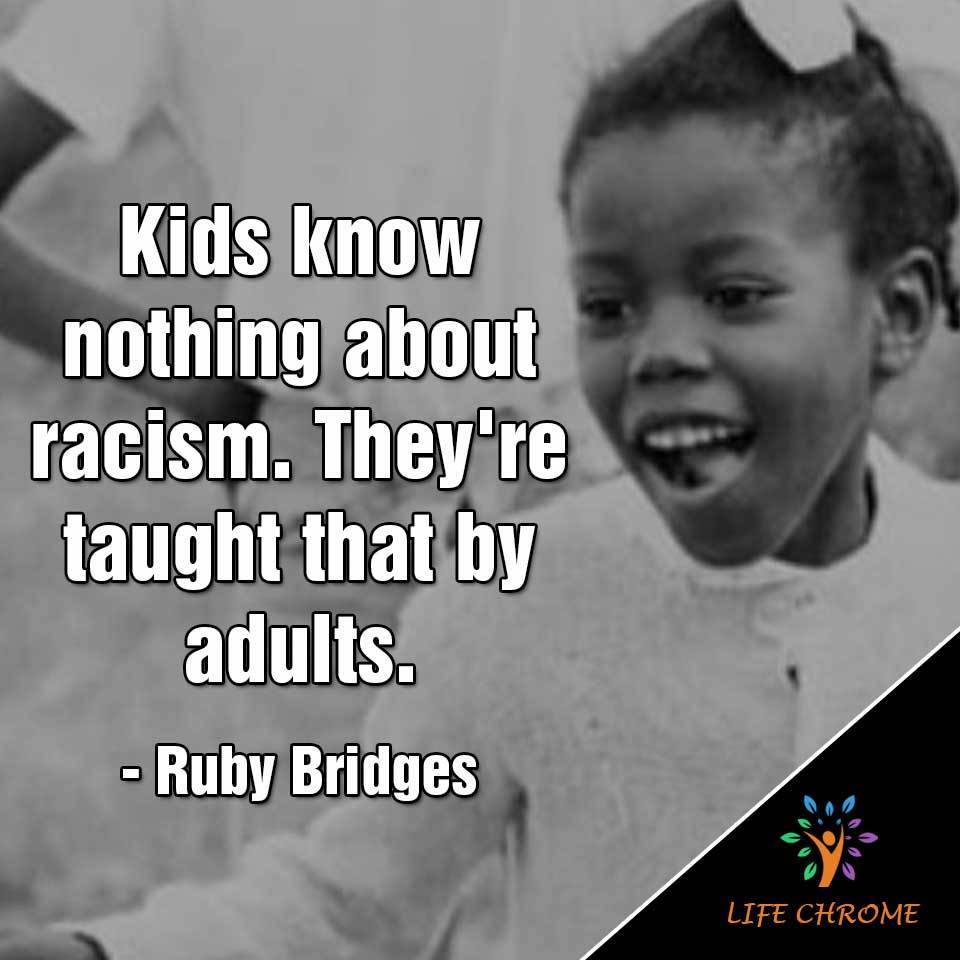 I wish there were enough marshals to walk with every child as they faced the hatred and racism today, and to support, encourage them the way these federal marshals did for me.

When everyone in the neighborhood was over at my house congratulating my family on me passing the test, I thought they were congratulating me because I passed a test to go to college straight from kindergarten because I was so smart.

Racism is a grown-up disease and we must stop using our children to spread it. 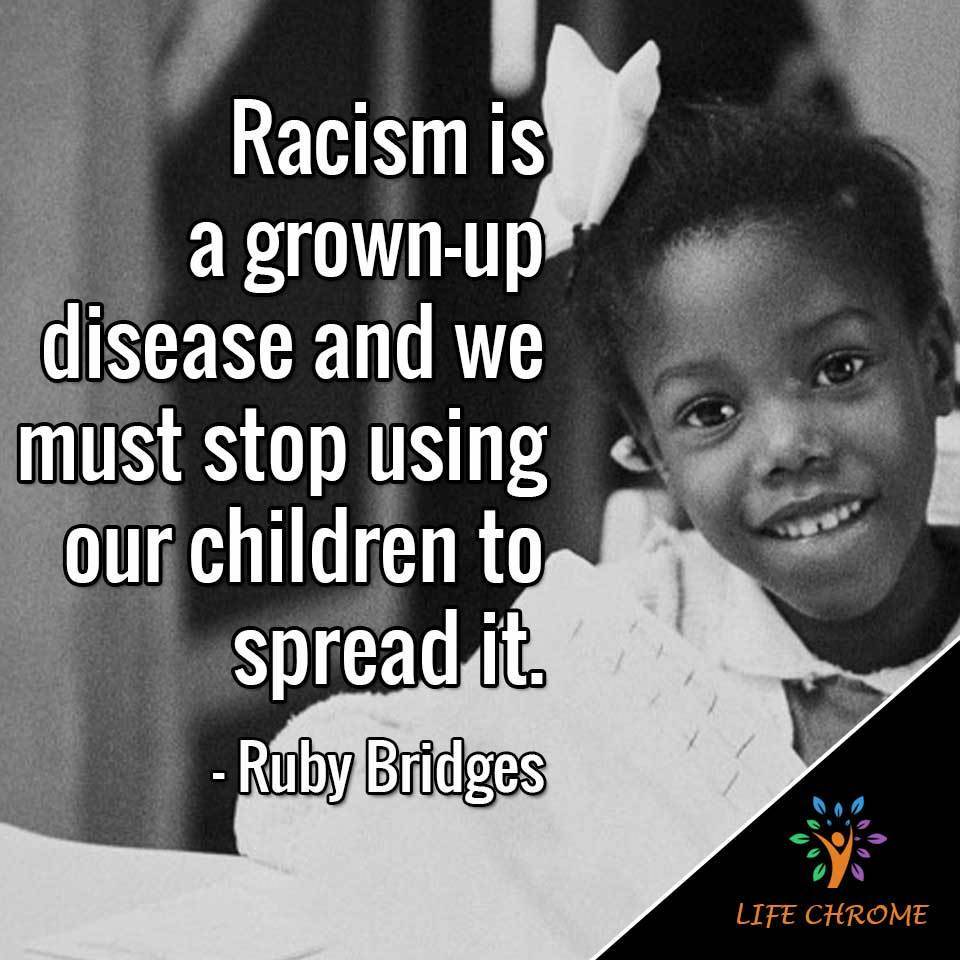 I've been told that my ideas are grandiose. Yes, they are. However, so were the ideas that marched me through screaming crowds and up the stairs of William Frantz Elementary more than 50 years ago.

[My teacher Mrs. Henry] taught me what Dr. King tried to teach all of us. We should never judge a person by the color of their skin, but by the content of their character. That was the lesson I learned at 6 years old.

The person that impacted my life the most would have to have been my father because he shaped me into who I am today. 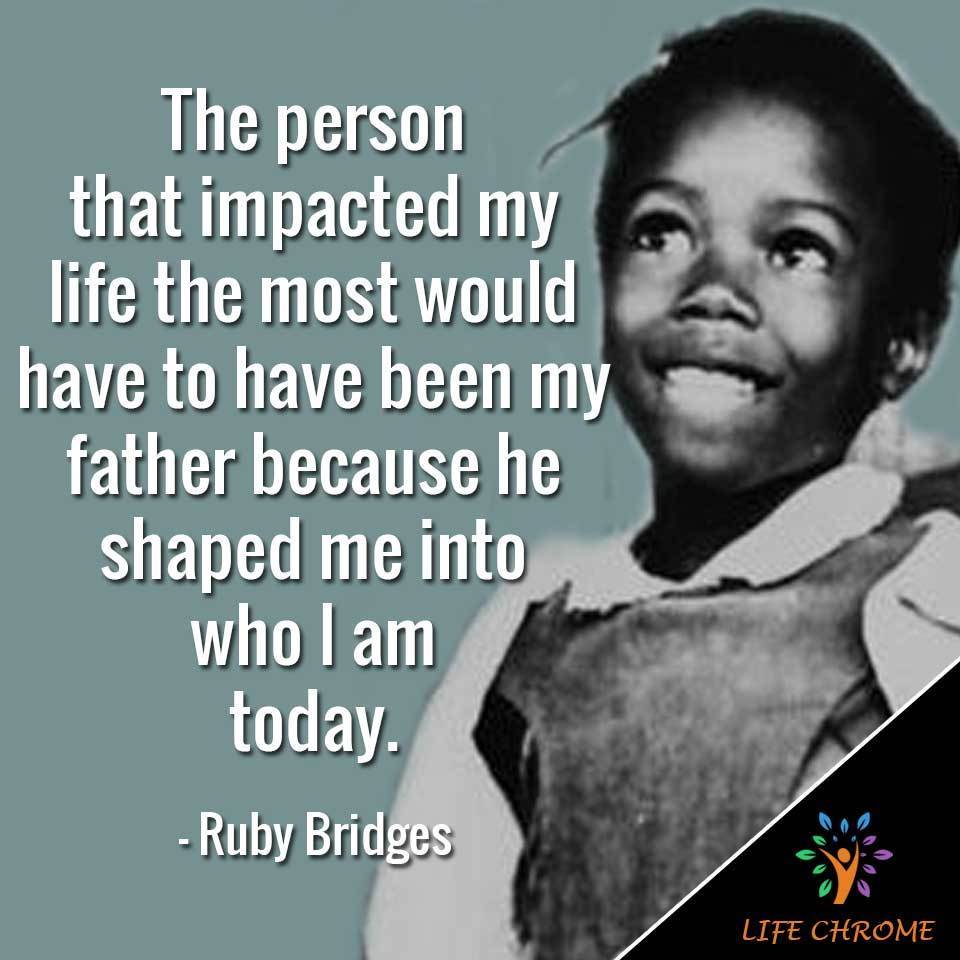 The funny part about the test was that 6 children passed it to go to the all white schools, but none of them were boys, it was all girls. Later my parents found out that the 2 other girls in my district had been taken out by their parents because they thought it was going to be a bad idea. I was going to William Frantz alone. 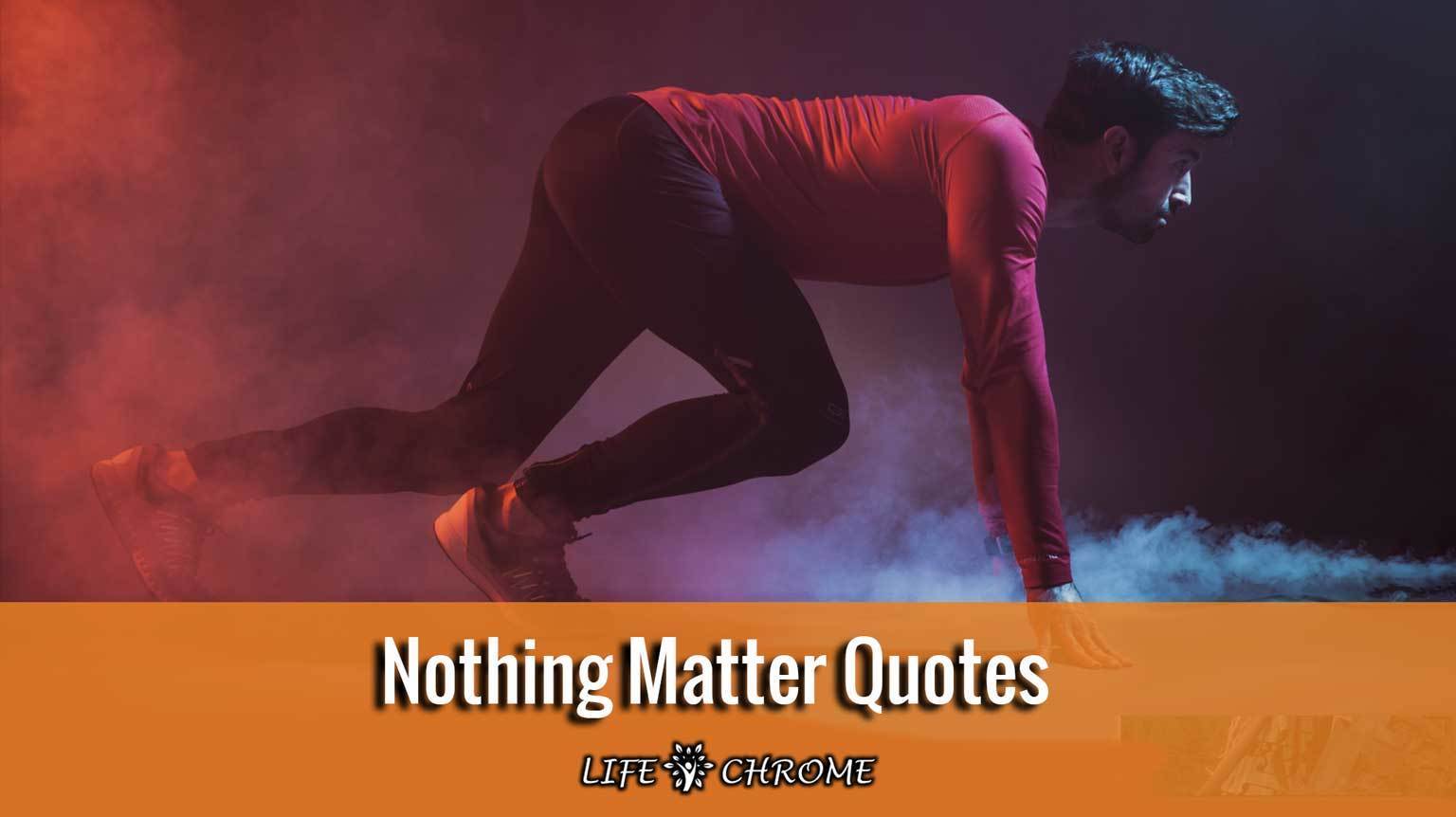