“Too many people spend money they haven’t earned, to buy things they don’t want, to impress people they don’t like.” – Will Rogers

“A wise person should have money in their head, but not in their heart.” – Jonathan Swift

“Money and women are the most sought after and the least known about of any two things we have.” – Will Rogers

”Money won’t create success, the freedom to make it will.” – Nelson Mandela

“Opportunity is missed by most people because it is dressed in overalls and looks like work.” – Thomas Edison

“If you think nobody cares if you’re alive, try missing a couple of car payments.” – Earl Wilson

“Don’t tell me where your priorities are. Show me where you spend your money and I’ll tell you what they are.” – James W. Frick

“Of the billionaires I have known, money just brings out the basic traits in them. If they were jerks before they had money, they are simply jerks with a billion dollars.” – Warren Buffett

“Money can buy some things to create happiness, but it can never buy happiness.” – Ellen j barrier 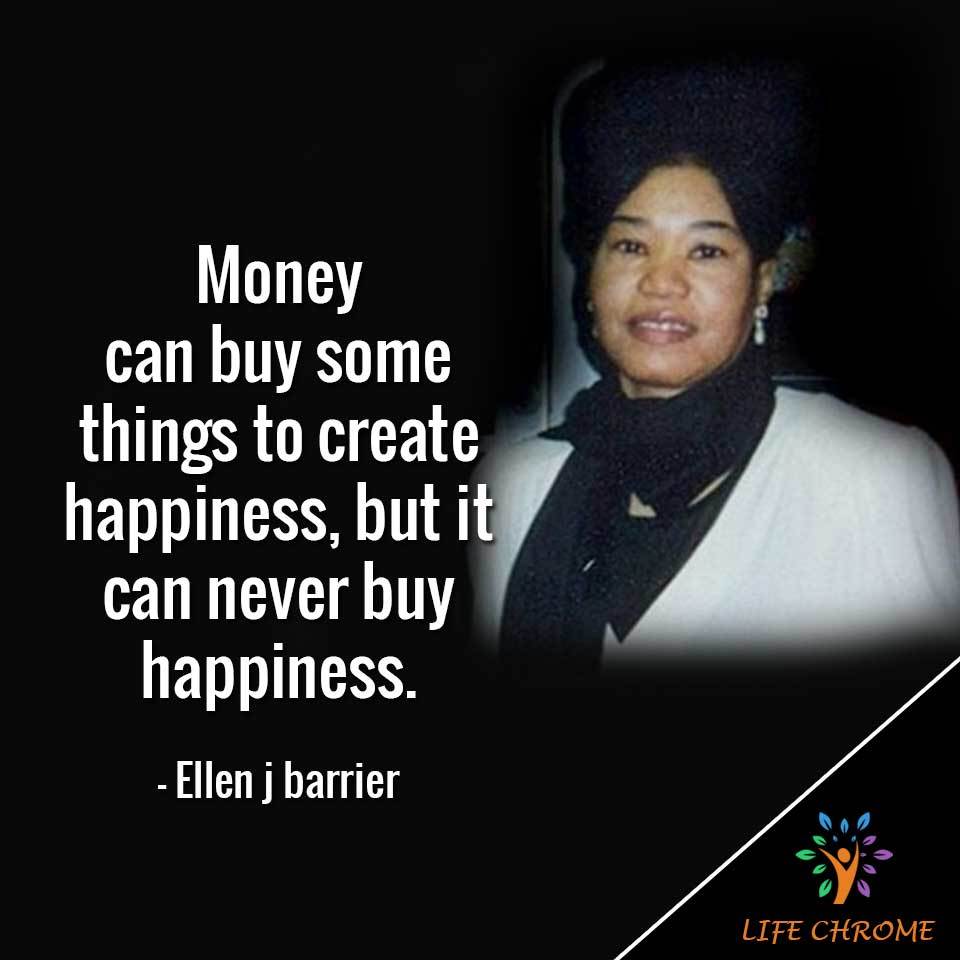 “An investment in knowledge pays the best interest.” – Benjamin Franklin

“If a person gets his attitude toward money straight, it will help straighten out almost every other area in his life.” – Billy Graham

“You can only become truly accomplished at something you love. Don’t make money your goal. Instead, pursue the things you love doing, and then do them so well that people can’t take their eyes off you.” – Maya Angelou

”Money has never made man happy, nor will it, there is nothing in its nature to produce happiness. The more of it one has the more one wants.” – Benjamin Franklin

“There is a gigantic difference between earning a great deal of money and being rich.” – Marlene Dietrich

“Empty pockets never held anyone back. Only empty heads and empty hearts can do that.” – Norman Vincent Peale

“Not he who has much is rich, but he who gives much.” – Erich Fromm

“A business that makes nothing but money is a poor business.” – Henry Ford

“Never spend your money before you have earned it.” – Thomas Jefferson

“Unexpected money is a delight. The same sum is a bitterness when you expected more.” – Mark Twain

“The individual investor should act consistently as an investor and not as a speculator.” – Ben Graham

“Investing should be more like watching paint dry or watching grass grow. If you want excitement, take $800 and go to Las Vegas.” – Paul Samuelson

“I’m a great believer in luck, and I find the harder I work the more I have of it.” – Thomas Jefferson

“Las Vegas is the only place I know where money really talks–it says, “Goodbye.” – Frank Sinatra

“My favorite things in life don’t cost any money. It’s really clear that the most precious resource we all have is time.” – Steve Jobs

“Time is more valuable than money. You can get more money, but you cannot get more time.” – Jim Rohn

“You can be young without money, but you can’t be old without it.” –Tennessee Williams 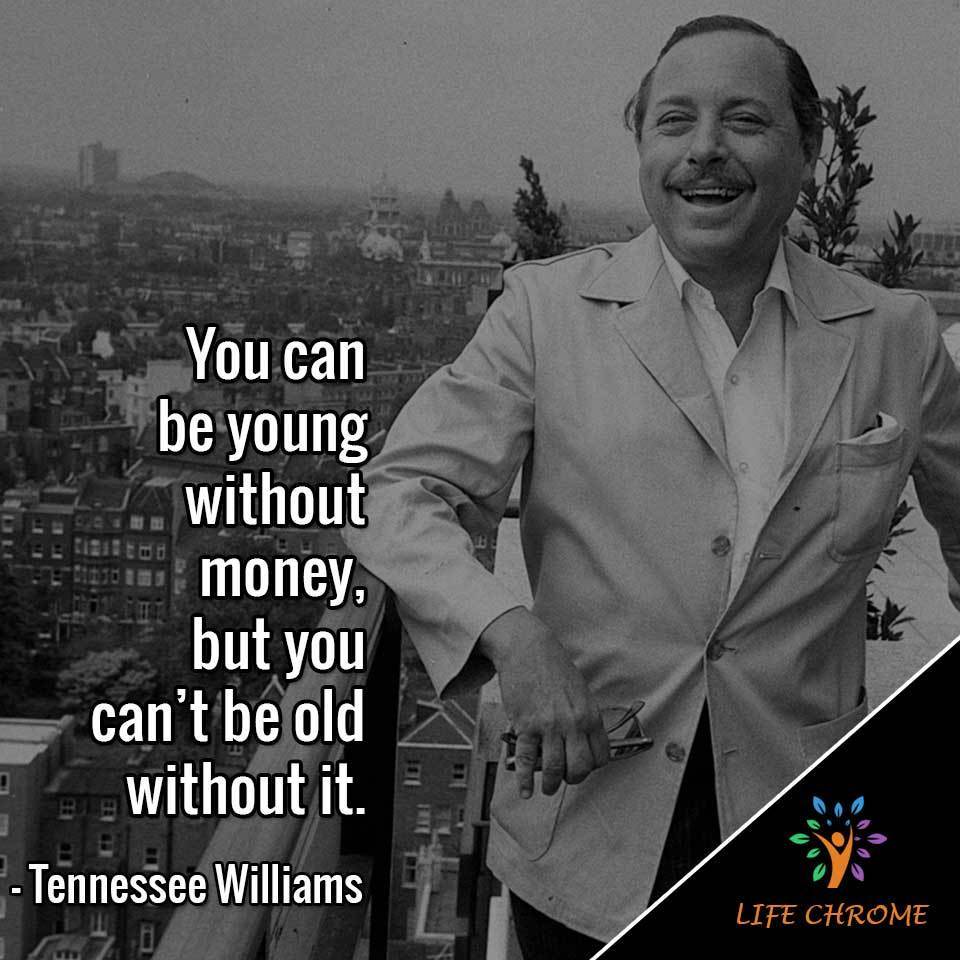 “I love money. I love everything about it. I bought some pretty good stuff. Got me a $300 pair of socks. Got a fur sink. An electric dog polisher. A gasoline powered turtleneck sweater. And, of course, I bought some dumb stuff, too.” – Steve Martin

“If money is your hope for independence you will never have it. The only real security that a man will have in this world is a reserve of knowledge, experience, and ability.” – Henry Ford

“If you want to know what a man is really like, take notice of how he acts when he loses money.” – Simone Weil

“Money never made a man happy yet, nor will it. The more a man has, the more he wants. Instead of filling a vacuum, it makes one.” – Benjamin Franklin

“Happiness is not in the mere possession of money; it lies in the joy of achievement, in the thrill of creative effort.” –  Franklin D. Roosevelt

“You must gain control over your money or the lack of it will forever control you.” – Dave Ramsey 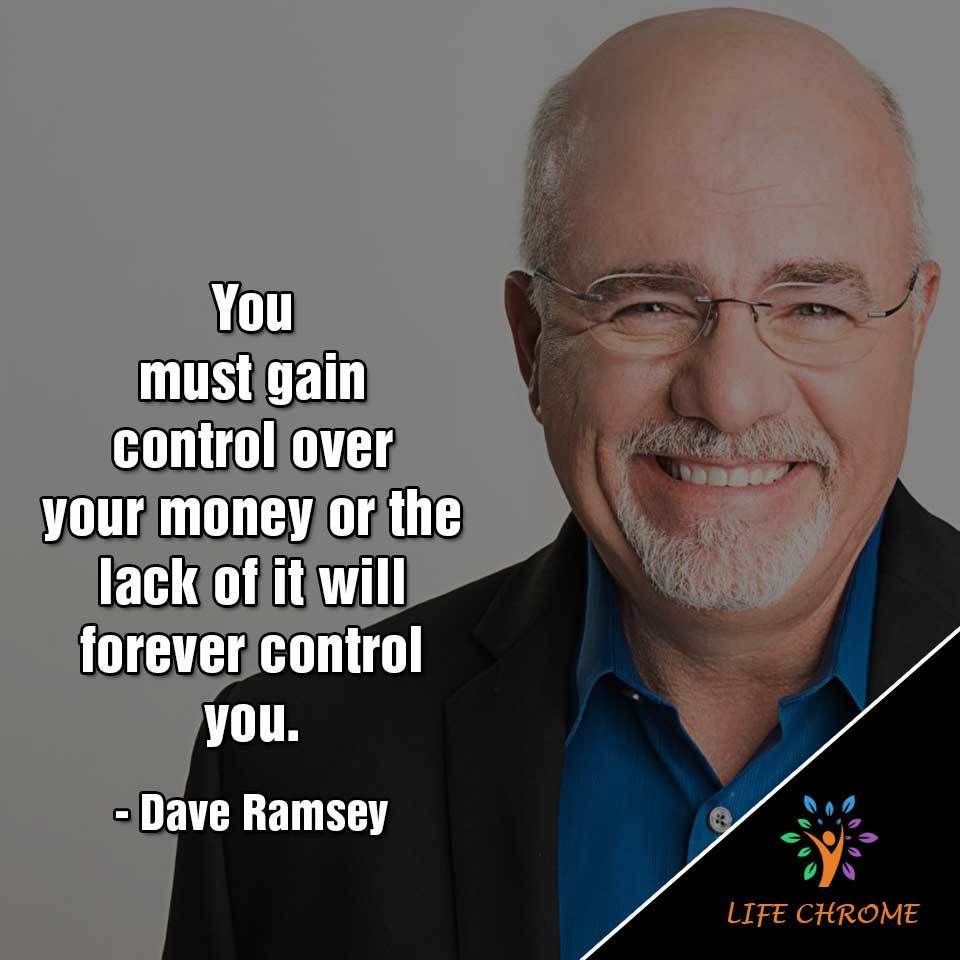 “Capital as such is not evil; it is its wrong use that is evil. Capital in some form or other will always be needed.” – Gandhi

“If you would be wealthy, think of saving as well as getting.” – Benjamin Franklin

“Anyone who lives within their means suffers from a lack of imagination.” – Oscar Wilde

“Money was never a big motivation for me, except as a way to keep score. The real excitement is playing the game.” – Donald Trump

“The trick is to stop thinking of it as ‘your’ money.” – IRS auditor

“Money is a guarantee that we may have what we want in the future. Though we need nothing at the moment it insures the possibility of satisfying a new desire when it arises.” – Aristotle

“Money is only a tool. It will take you wherever you wish, but it will not replace you as the driver.” – Ayn Rand

“I’d like to live as a poor man with lots of money.” – Pablo Picasso

“Money is multiplied in practical value depending on the number of W’s you control in your life: what you do, when you do it, where you do it, and with whom you do it.” – Tim Ferriss

"The rich invest in time, the poor invest in money." -Warren Buffett 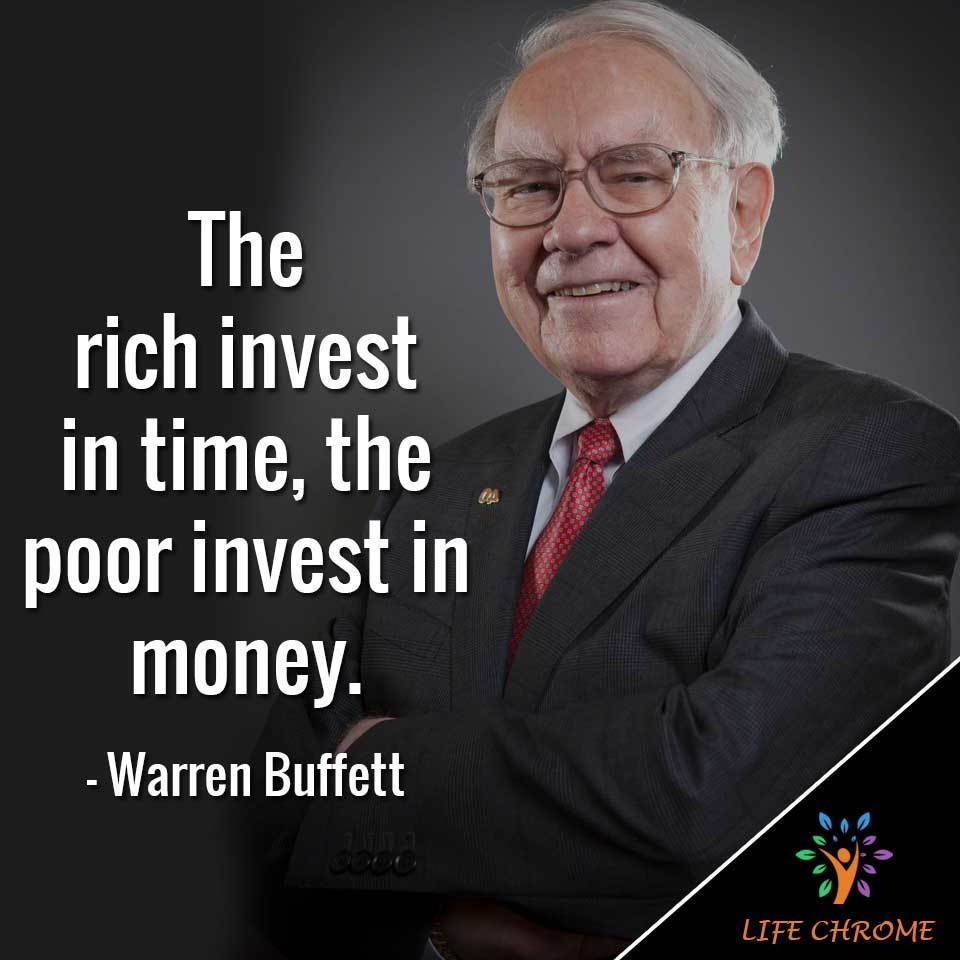 “Many people take no care of their money till they come nearly to the end of it, and others do just the same with their time.” – Johann Wolfgang von Goethe

“Money can’t buy happiness, but it will certainly get you a better class of memories.” – Ronald Reagan

“What difference does it make how much you have? What you do not have amounts to much more.” – Seneca

“Many folks think they aren’t good at earning money, when what they don’t know is how to use it.” – Frank A. Clark

“The Stock Market is designed to transfer money from the Active to the Patient.” – Warren Buffett

“When I was young I thought that money was the most important thing in life; now that I am old I know that it is.” – Oscar Wilde

“If you have trouble imagining a 20% loss in the stock market, you shouldn’t be in stocks.” – John Bogle

“If you took our top fifteen decisions out, we’d have a pretty average record. It wasn’t hyperactivity, but a hell of a lot of patience. You stuck to your principles and when opportunities came along, you pounced on them with vigor.” – Charlie Munger

“The habit of saving is itself an education; it fosters every virtue, teaches self-denial, cultivates the sense of order, trains to forethought, and so broadens the mind.” – T.T. Munger

“The quickest way to double your money is to fold it in half and put it in your back pocket.” – Will Rogers

“A simple fact that is hard to learn is that the time to save money is when you have some.” – Joe Moore

“Without continual growth and progress, such words as improvement, achievement, and success have no meaning.” – Benjamin Franklin

“There are people who have money and people who are rich.”— Coco Chanel 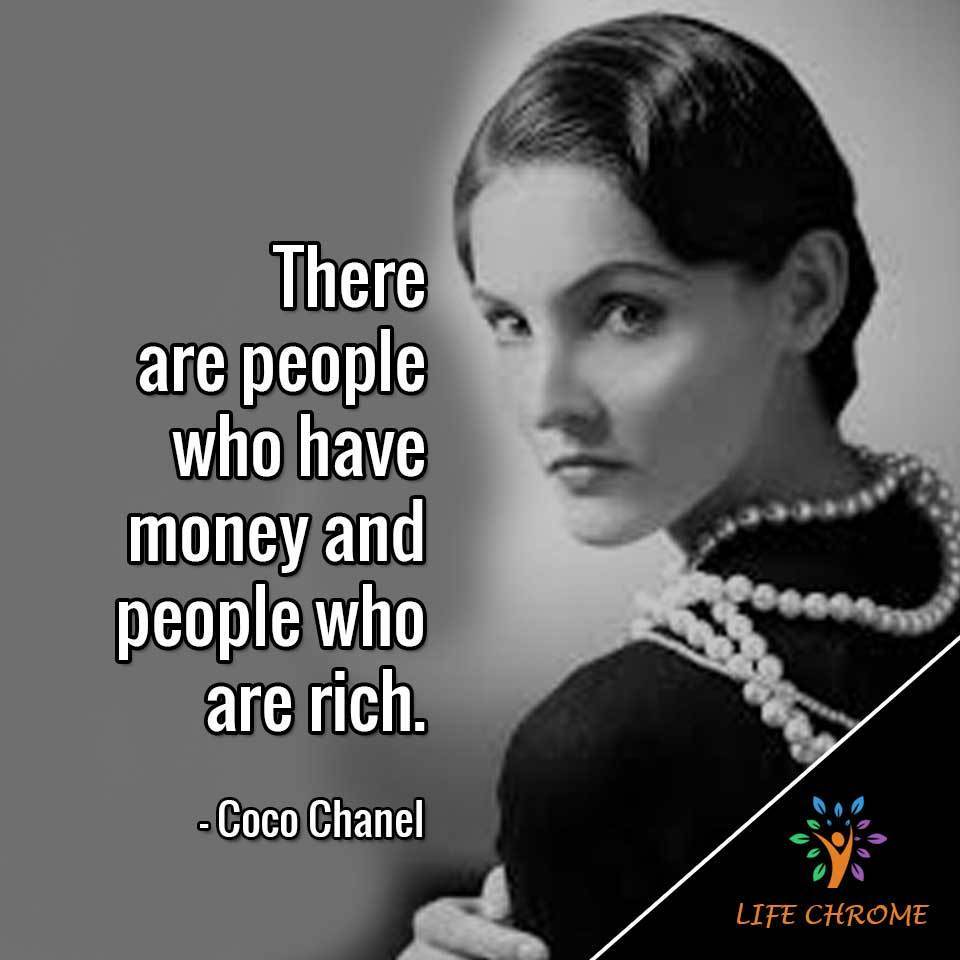 “Money is a terrible master but an excellent servant.” – P.T. Barnum

“Try to save something while your salary is small; it’s impossible to save after you begin to earn more.” – Jack Benny

“I made my money the old-fashioned way. I was very nice to a wealthy relative right before he died.” – Malcolm Forbes

“Money is not the most important thing in the world. Love is. Fortunately, I love money.” – Jackie Mason

“Put all good eggs in one basket and then watch that basket.” – Andrew Carnegie

“Money grows on the tree of persistence.” – Japanese Proverb

“It’s easier to feel a little more spiritual with a couple of bucks in your pocket.” – Craig Ferguson

“Every time you borrow money, you’re robbing your future self.” – Nathan W. Morris

“The stock market is filled with individuals who know the price of everything, but the value of nothing.” – Philip Fisher

“Wealth is not his that has it, but his that enjoys it.” – Benjamin Franklin

“Everyday is a bank account, and time is our currency. No one is rich, no one is poor, we’ve got 24 hours each.” – Christopher Rice

“How many millionaires do you know who have become wealthy by investing in savings accounts? I rest my case.” – Robert G. Allen

“Money cannot buy peace of mind. It cannot heal ruptured relationships, or build meaning into a life that has none.” – Richard M. DeVos

“If you wish to get rich, save what you get. A fool can earn money; but it takes a wise man to save and dispose of it to his own advantage.” –Brigham Young

“Money is power, freedom, a cushion, the root of all evil, the sum of blessings.” – Carl Sandburg