I don't do regrets. Regrets are pointless. It's too late for regrets. You've already done it, haven't you? You've lived your life. No point wishing you could change it.

If you think you are too old to rock 'n roll, then you are.

In my life so far, I have discovered that there are really only two kinds of people: those who are for you, and those who are against you. Learn to recognize them, for they are often and easily mistaken for each other.

We wanna be like Status Quo and go on forever. Chuck Berry never changed. Little Richard never changed. I’d rather be like that and stick to a formula we’re happy with. 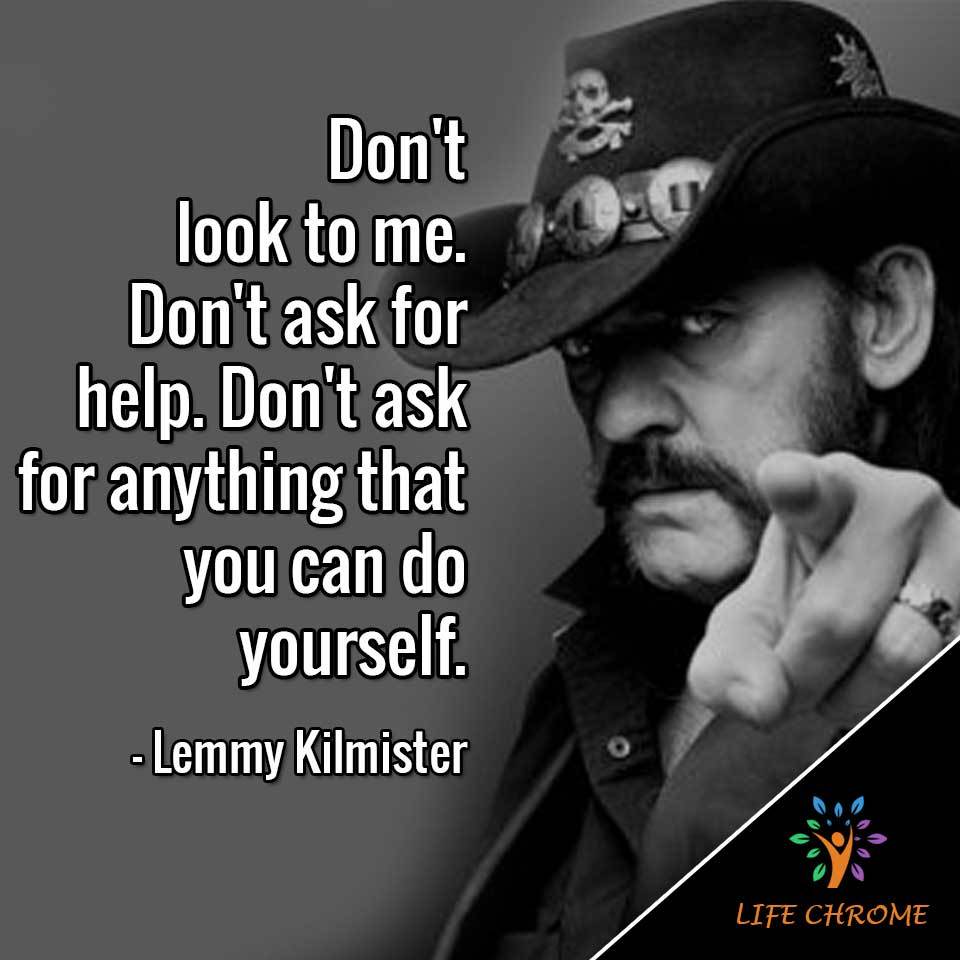 I’ve always liked America because it’s...eager. Whereas the British are resentful. They still haven’t gotten over losing India. The British get on my tits all the time.

It’s all random, everything is random. We like to put our patterns on things, but nature never wrote a straight line.

The only time I've seen any rebellion was in the fifties, sixties and early seventies. The rest of it you can keep.

I suppose I was about 10 when I had my first wet dream … first nocturnal emission. Spelt with an ‘o’, – omission – there was nobody with me, see?

Apparently people don't like the truth, but I do like it; I like it because it upsets a lot of people. If you show them enough times that their arguments are bullshit, then maybe just once, one of them will say, 'Oh! Wait a minute - I was wrong.' I live for that happening. Rare, I assure you.

Gay people are made and not born…look at the rent boys on Sunset Boulevard.

Being fired from Hawkwind for drugs is a bit like being pushed off the Empire State Building for liking heights, you know?

Safe sex, safe music, safe clothing, safe hair spray, safe ozone layer. Too late! Everything that's been achieved in the history of mankind has been achieved by not being safe.

There are a lot of good books around. People don't read any more. It's a sad state of affairs. Reading's the only thing that allows you to use your imagination. When you watch films it's someone else's vision, isn't it?

We can’t have everything, ’cause where would we put it.

Born to lose. Live to win.

My entire social life is spent in bars, so I don't see giving up drinking as a viable option. Could you see me saying, 'Tomato juice please?

It seems that our brave new world is becoming less tolerant, spiritual and educated than it ever was when I was young. 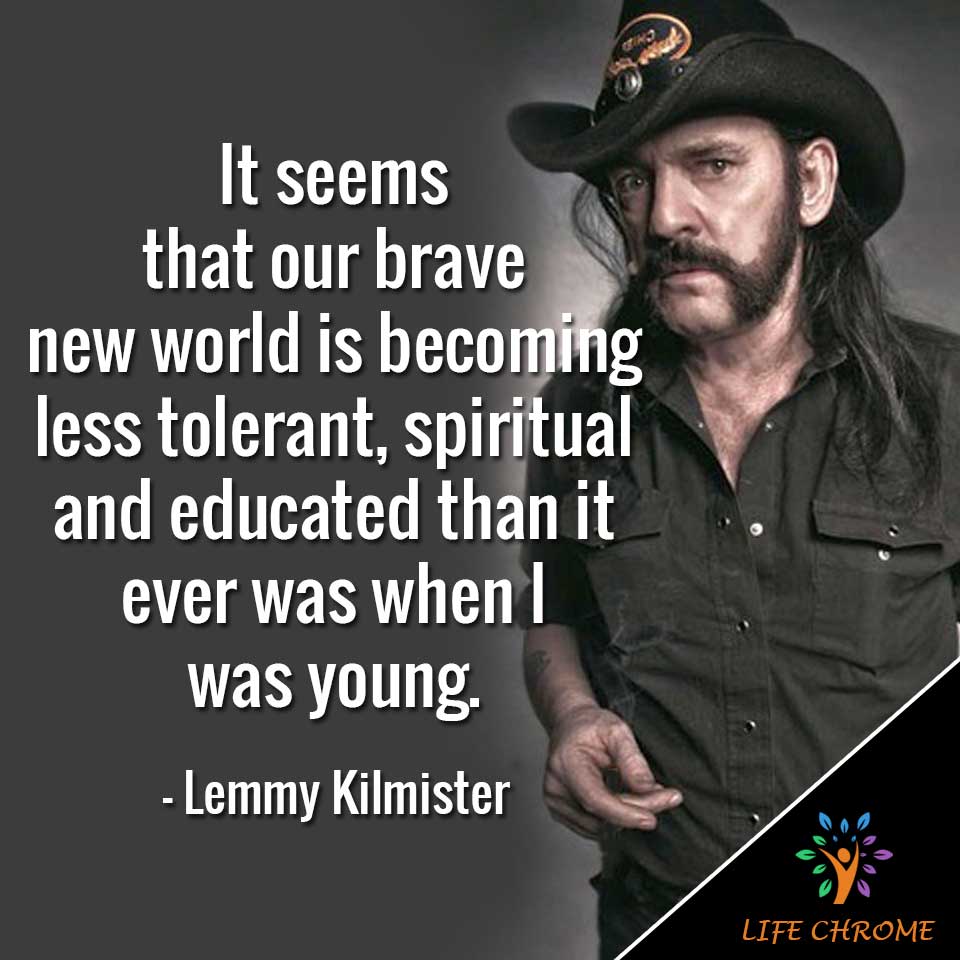 As you go through life's rich tapestry, you realize that most people you meet aren't fit to shine your shoes. It's a sad fact, but it's true. A good friend is someone who'd hide you if you were on the run for murder. How many of them do you know?

I don't understand people who believe that if you ignore something, it'll go away. That's completely wrong - if it's ignored it gathers strength. Europe ignored Hitler for twenty years. As a result he slaughtered a quarter of the world!

Sex, death and war. And justice. There's no shortage of lyrics there.

Inherited hatred (i.e. hatred your parents schooled you in) is not only stupid, it is destructive - why make your only driving force hate? Seems really f***ing dumb to me.

People don't want to see the guy next door on the stage, they want to see a being from another planet. You want to see somebody you'd never meet in ordinary life.

I don't see why there should be a point where everyone decides you're too old. I'm not too old, and until I decide I'm too old I'll never be too fucking old.

Home is in here [tapping temple]. Where you live is just a geographical preference.

If you're going to be a fucking rock star go be one. People don't want to see the guy next door on stage; they want to see a being from another planet. You want to see somebody you'd never meet in ordinary life.

I made more money out of writing those four songs for Ozzy than I made out of fifteen years of Motörhead – ludicrous, isn’t it!

My ethic is: ‘Eat, drink and be merry, for tomorrow we die.’ You can be as careful as you want, but you’re going to die anyway, so why not have fun?

Reading's the only thing that allows you to use your imagination. 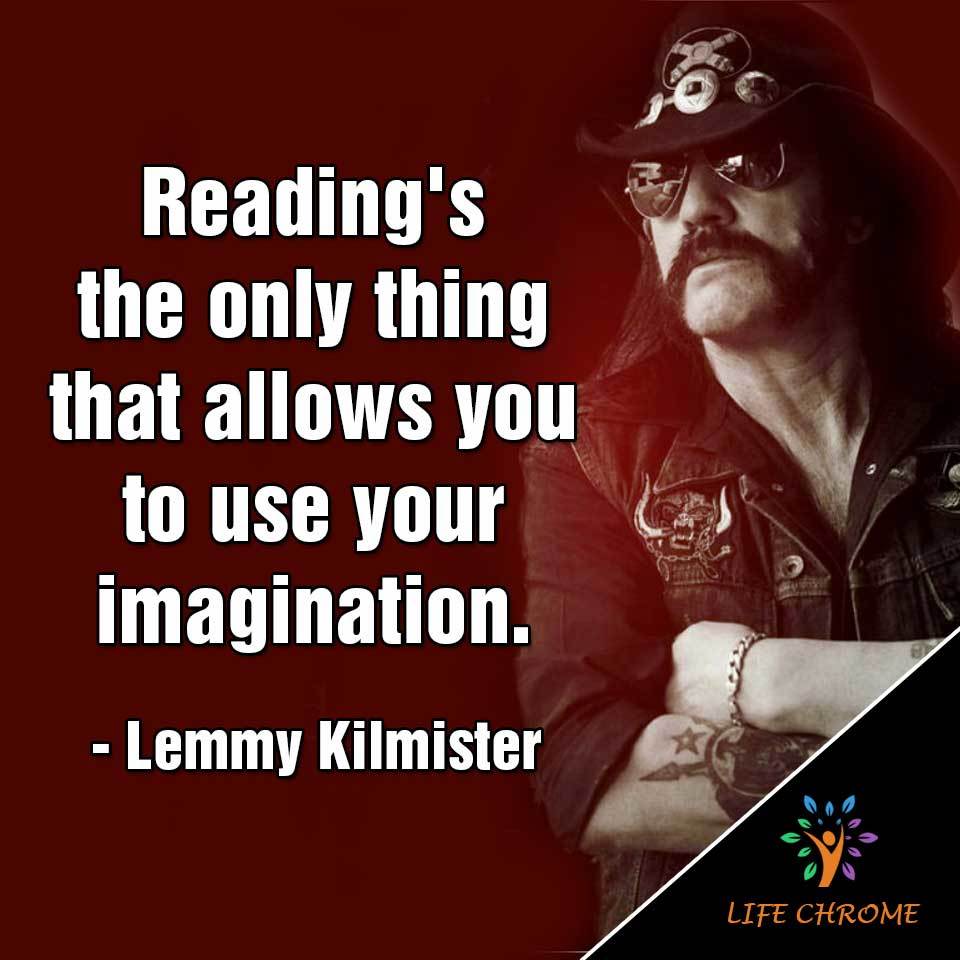 Every generation thinks they are stronger than the generation before it. They think, "It can't happen to me." In the past people have died making that same mistake.

People don’t become better when they’re dead; you just talk about them as if they are. But it’s not true! People are still assholes, they’re just dead assholes!

It will be funny in about 10 years.

Integrity is everything to me. I will not die ashamed. I will live on my deathbed knowing that I gave it my best shot, and everything else is meaningless to me.

The only interesting thing about religion is how many people it's slaughtered. Communism and Nazism are religions as well, make no mistake about it.

Music had been going on a long time before that. You have to remember that before rock n' roll there were a bunch of jazz musicians all doing heroin. That sh*t has been around a long time.

If you didn’t do anything that wasn’t good for you it would be a very dull life. What are you gonna do? Everything that is pleasant in life is dangerous. Have you noticed that? I’d like to find the bastard that thought that one up.

I have never been married, but that doesn't mean that I didn't mate. As you get older you get too many bad habits. Who is ever going to put up with me?

I'm an egomaniac. I like being the centre of attention as much as anybody so I didn't mind. I was in it for the girls, to tell the truth. I think if more musicians told the truth, that would be the reason why most of them are in it. When you're young and you're desperate to get laid, you work out that being a bricklayer isn't that attractive.

It is a well-known mystery that guitar players suddenly get better once they are dead. Buddy Holly was the first. Stevie Ray Vaughan is known by a lot more people than had ever heard of him when he was alive.

There was a magazine in England who said I screwed 2,000 women and I didn’t; I said 1,000. When you think about it, it isn't that unreasonable.

People lose their lives in the drug wars and you don't have to prove it to yourself because others have proved it for you. 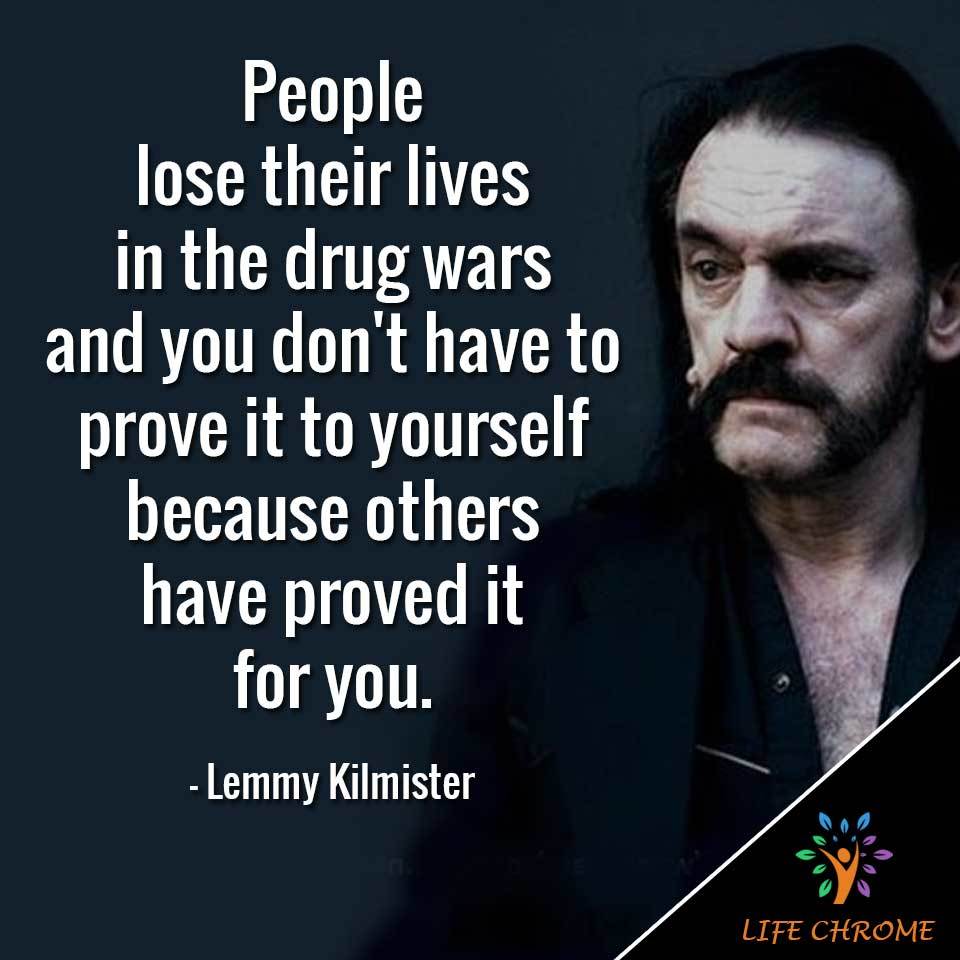 You haven't been soiling your soul in public for years like we have.

It became kind of a fad in the late '70s to try to help people wake up out of comas by hearing things that they liked. I remember we sent out about six tapes. We heard that we were this one kid's favorite band so we sent a tape that said, "Hey this is Motörhead. It's time to wake up.

[My favorite decade] probably the '60s, because there were hardly any rules and heroin hadn't shown up, so people hadn't started dying. It was incredibly upbeat, and we almost did change the world. I guess that was the best one .

It's just that I am too old now to chase all the woman involved; which just seems a shame.

The first time The Runaways played in Britain, Joan Jett wore my bullet belt onstage. The Runaways were really the first all-girl band to really strut their stuff and say, "F**k you." "Cherry Bomb" was the best song for a girl band to sing. It was just outrageous at the time. There were American families sitting on the sofa watching television going, "F**k me." It was great fun.

Eric Clapton wrote "Layla" when he was coked out of his mind. Later on, it nearly killed him.

I guess when you're young you have tunnel vision.

We sent out tapes to the others but they didn't wake up. It was worth it just to have one kid wake up. I got to meet him after he woke up.

Randy [ Rhoads] had small hands. Boy, could he play guitar. He became an even better guitar player after he died.

We know what we are doing by now.We seem to make an album every 18 months or so and I think every band should do that. We're not writing "Sgt. Pepper" every time; we are writing straight ahead rock n' roll.

I climbed down the outside of a Holiday Inn once just to surprise one of my crew by getting on his balcony and knocking on his window.

What happened in New York and Washington is the same thing that England and America did to Berlin every day for three years during World War II -- and Germany did the same thing to England.

He [Randy Rhoads] was really a good guy. I never could get over how incredibly little he was.

The Beatles had an influence on everybody. You have to realize what an incredible explosion the Beatles were. 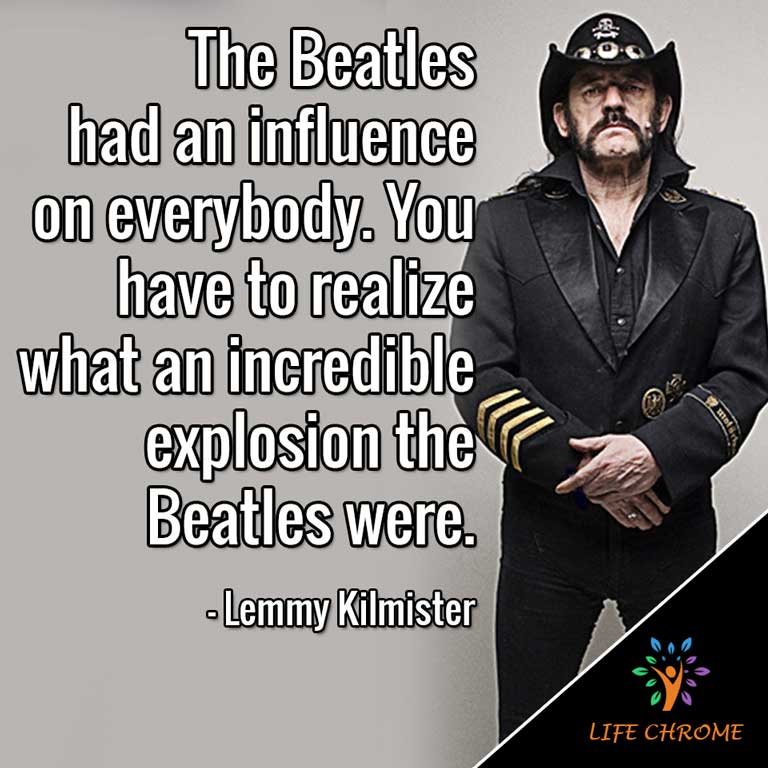 I think that is just about as dishonest as a person giving a bad interview. I despise people like that; they don't get two tries. It's all just sensation. It is always bullshit.

It was just a mercy f**k, as it was our 30th anniversary. They gave Grammy to us for a cover of somebody else's song. It would have a lot more meaning if it had been for one of our songs.

They [The Beatles] were the first band to not have a lead singer in the band.

Death is an inevitability, isn't it? You become more aware of that when you get to my age. I don't worry about it. I'm ready for it. When I go, I want to go doing what I do best. If I died tomorrow, I couldn't complain. It's been good.

We never nicked stuff from other bands because that was a no-no because we were all in the same boat. You don't steal from the poor because, let's face it, they're poor. There's no sense in that.

I have done interviews in the past, and they cut everything out except for the outrageous line, and then they take it out of context.

We never played China, India or Africa. We also haven't played Russia enough. I would love to play those places.

When George [Harrison] died the guards at Buckingham Palace played a medley of George's songs during the changing of the guard; that sort of thing never happens.

If I hadn't been living here [in America], do you think we would have gotten a Grammy? No chance.

We were nominated [for Grammy] once before for our album 1916. We were up against Metallica at the time and they had just sold a quarter of a zillion albums.

Daily papers in England used to have an entire page of the paper dedicated to what the Beatles had done the day before.

They [The Beatles ] were the first band to write their own songs in Britain because we always just covered American songs before that.

Everybody [in The Beatles ] was singing at the same time and the harmonies were great.

if you like to gameble, i tell you i'm your man, you win some, lose some, all the same to me.