Being a woman is a terribly difficult task, since it consists principally in dealing with men.

The belief in a supernatural source of evil is not necessary; men alone are quite capable of every wickedness.

I don't like work... but I like what is in work - the chance to find yourself. Your own reality - for yourself, not for others - which no other man can ever know.

All roads are long which lead to one's heart's desire.

It is the mark of an inexperienced man not to believe in luck.

Kisses are the remnants of paradise.

Reality, as usual, beats fiction out of sight.

Every age is fed on illusions, lest men should renounce life early and the human race come to an end. 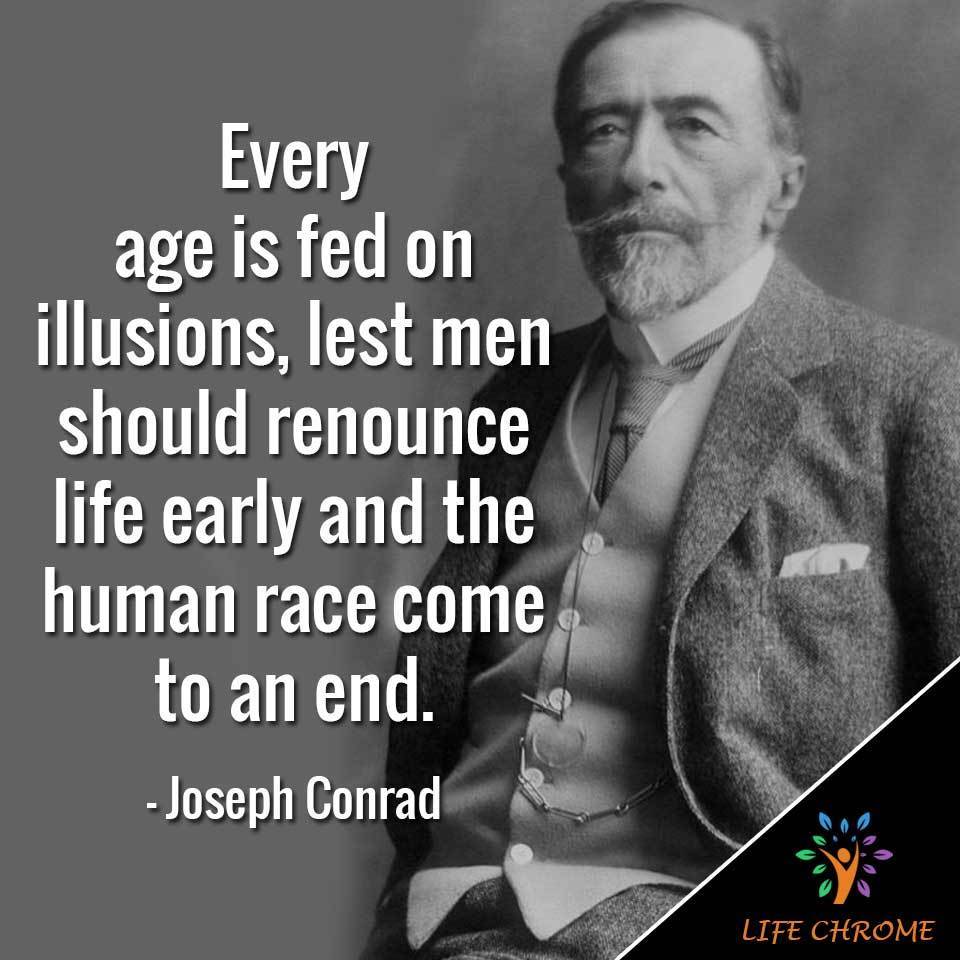 You shall judge a man by his foes as well as by his friends.

We live as we dream - alone.

You know I hate, detest, and can't bear a lie, not because I am straighter than the rest of us, but simply because it appals me. There is a taint of death, a flavour of mortality in lies - which is exactly what I hate and detest in the world - what I want to forget.

Words, as is well known, are the great foes of reality.

All ambitions are lawful except those which climb upward on the miseries or credulities of mankind.

All creative art is magic, is evocation of the unseen in forms persuasive, enlightening, familiar and surprising.

Any fool can carry on, but a wise man knows how to shorten sail in time.

It’s extraordinary how we go through life with eyes half shut, with dull ears, with dormant thoughts. Perhaps it’s just as well; and it may be that it is this very dullness that makes life to the incalculable majority so supportable and so welcome.

All a man can betray is his conscience.

The question is not how to get cured, but how to live.

Imagination, not invention, is the supreme master of art as of life.

As a general rule, a reputation is built on manner as much as on achievement.

The ethical view of the universe involves us in so many cruel and absurd contradictions that I have come to suspect that the aim of creation cannot be ethical at all. 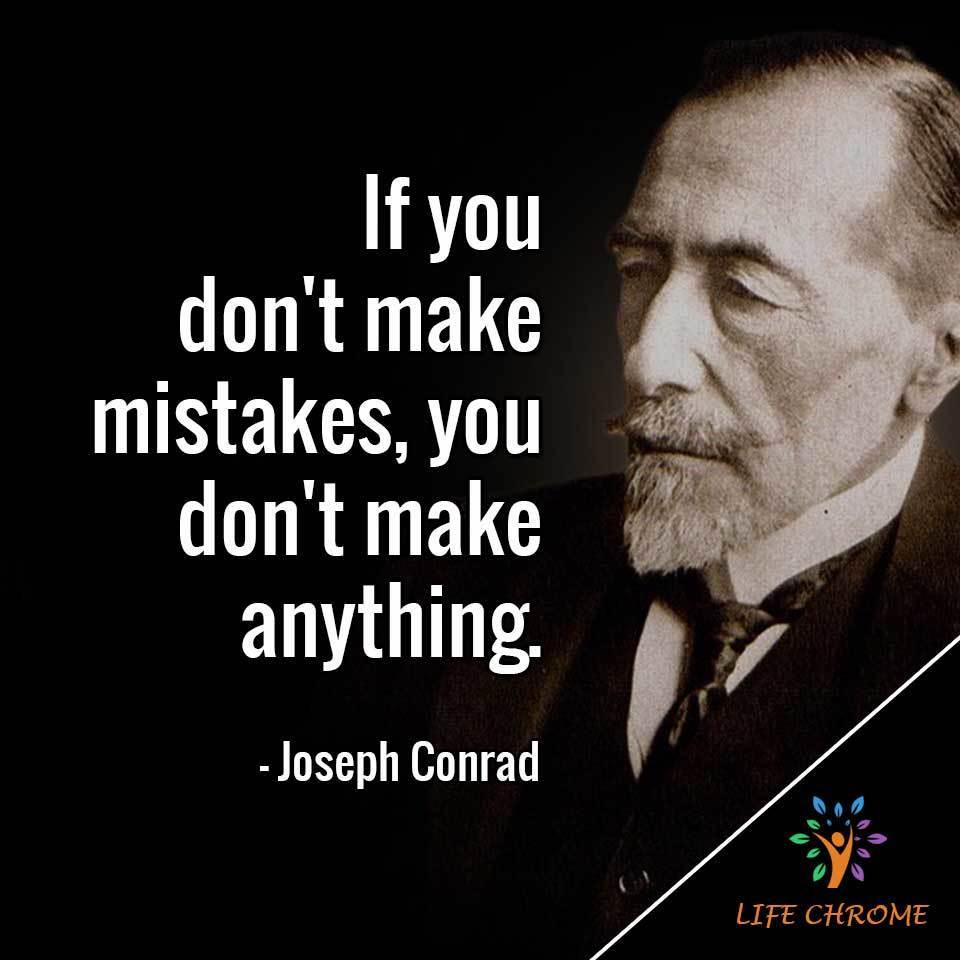 The conquest of the earth, which mostly means the taking it away from those who have a different complexion or slightly flatter noses than ourselves, is not a pretty thing when you look into it too much.

There is no credulity so eager and blind as the credulity of covetousness, which, in its universal extent, measures the moral misery and the intellectual destitution of mankind.

It is not the clear-sighted who rule the world. Great achievements are accomplished in a blessed, warm fog.

Everything can be found at sea according to the spirit of your quest.

It is my belief no man ever understands quite his own artful dodges to escape from the grim shadow of self knowledge.

He struggled with himself, too. I saw it -- I heard it. I saw the inconceivable mystery of a soul that knew no restraint, no faith, and no fear, yet struggling blindly with itself.

We can never cease to be ourselves.

In order to move others deeply we must deliberately allow ourselves to be carried away beyond the bounds of our normal sensibility.

Art is long and life is short, and success is very far off. 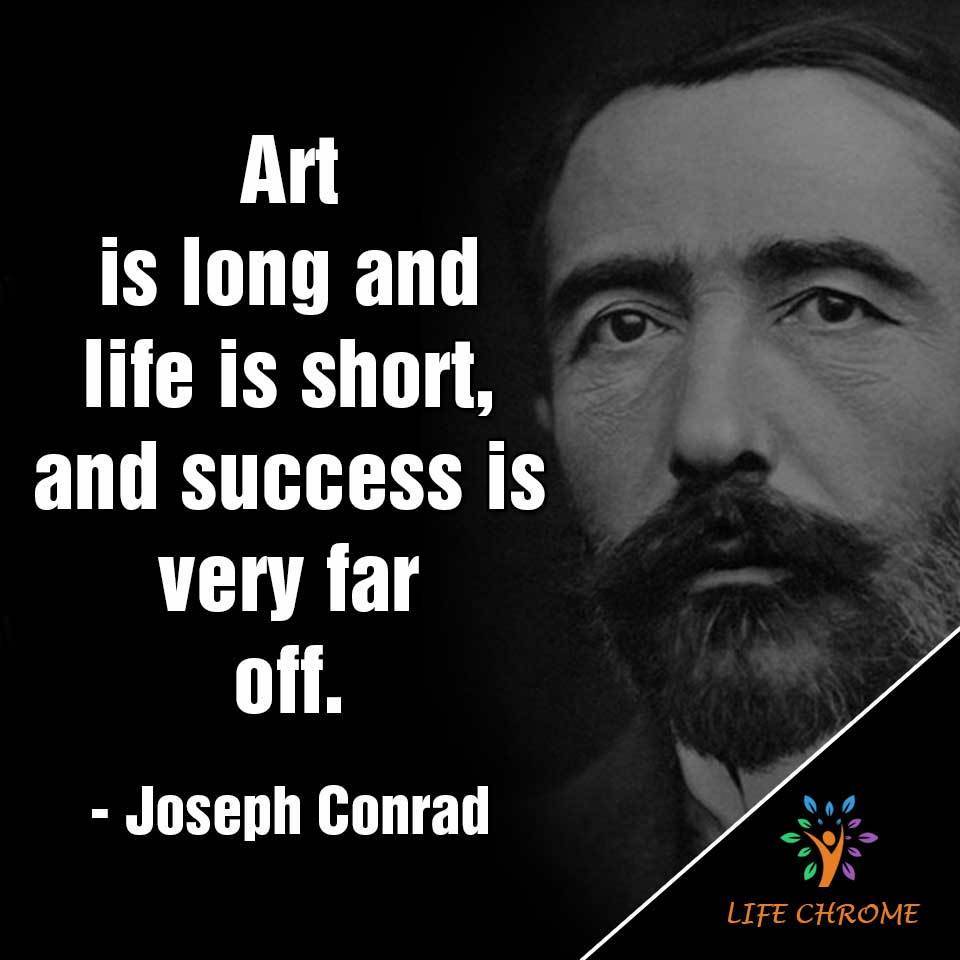 Few men realize that their life, the very essence of their character, their capabilities and their audacities, are only the expression of their belief in the safety of their surroundings.

Gossip is what no one claims to like, but everybody enjoys.

A man is a worker. If he is not that he is nothing.

There is nothing more enticing, disenchanting, and enslaving than the life at sea.

I am afraid that if you want to go down into history you'll have to do something for it.

I take it that what all men are really after is some form or perhaps only some formula of peace.

The scrupulous and the just, the noble, humane, and devoted natures; the unselfish and the intelligent may begin a movement - but it passes away from them. They are not the leaders of a revolution. They are its victims.

But it is like a running blaze on a plain, like a flash of lightning in the clouds. We live in the flicker - may it last as long as the old earth keeps rolling!

We live as we dream - alone. While the dream disappears, the life continues painfully. 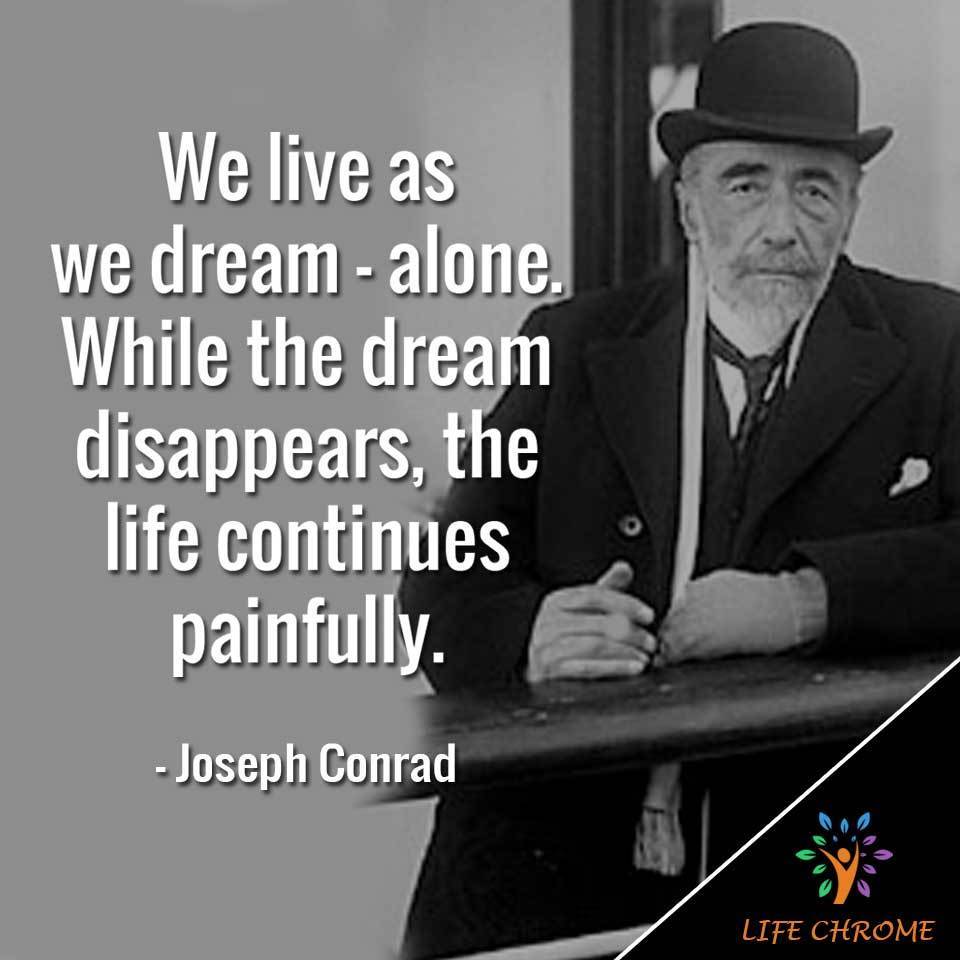 I have wrestled with death. It is the most unexciting contest you can imagine.

The artist appeals to that part of our being which is not dependent on wisdom; to that in us which is a gift and not an acquisition-and therefore, more permanently enduring. He speaks to our capacity for delight and wonder, to the sense of mystery surrounding our lives; to our sense of pity, and beauty and pain.

I slipped the book into my pocket. I assure you to leave off reading was like tearing myself away from the shelter of an old and solid friendship.

History repeats itself, but the special call of an art which has passed away is never reproduced. It is as utterly gone out of the world as the song of a destroyed wild bird.

Droll thing life is -- that mysterious arrangement of merciless logic for a futile purpose. The most you can hope from it is some knowledge of yourself -- that comes too late -- a crop of inextinguishable regrets.

A writer without interest or sympathy for the foibles of his fellow man is not conceivable as a writer.

To have his path made clear for him is the aspiration of every human being in our beclouded and tempestuous existence.

You can't, in sound morals, condemn a man for taking care of his own integrity. It is his clear duty.

To be busy with material affairs is the best preservative against reflection, fears, doubts ... all these things which stand in the way of achievement. I suppose a fellow proposing to cut his throat would experience a sort of relief while occupied in stropping his razor carefully.

They were conquerors, and for that you want only brute force--nothing to boast of, when you have it, since your strength is just an accident arising from the weakness of others.

Everybody had to be thoroughly understood before being accepted. 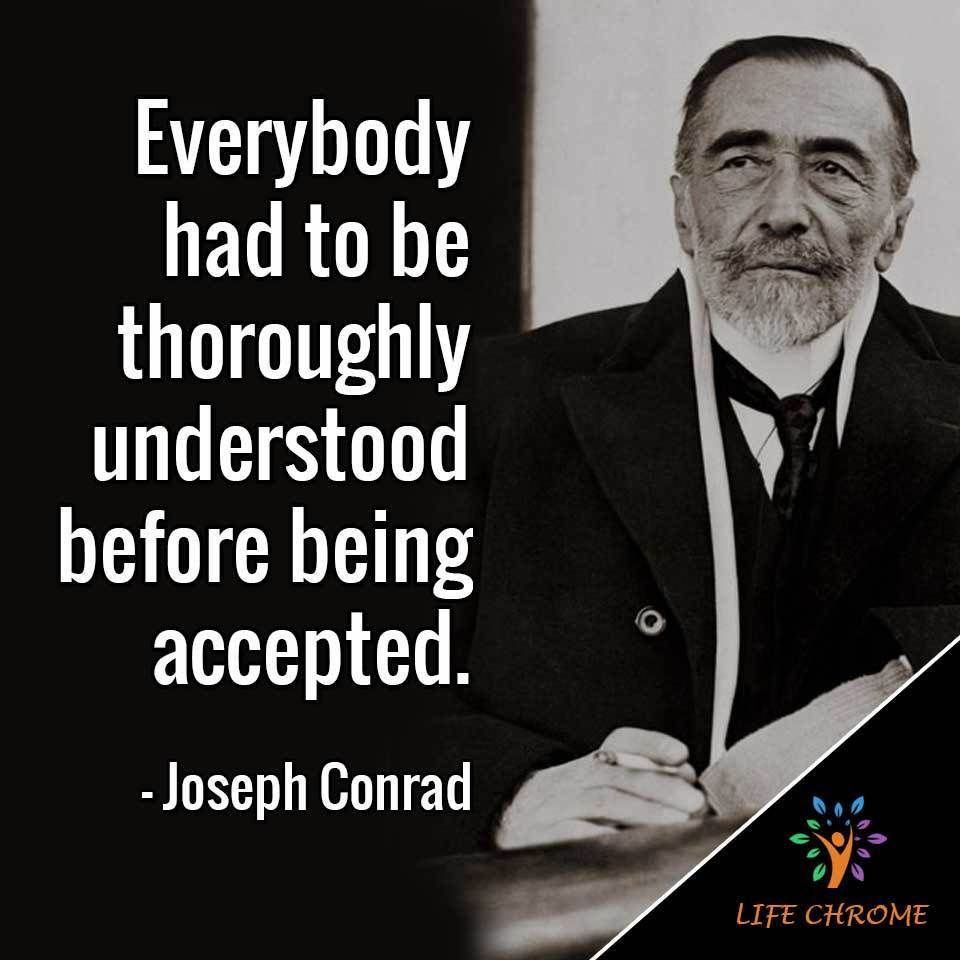 That's why love is so inseparable from any talk about truth and death, because we know that love is fundamentally a death of an old self that was isolated and the emergence of a new self
now entangled with another self, the self that you fall in love with.

Nowhere else than upon the sea do the days, weeks, and months fall away quicker into the past. They seem to be left astern as easily as the light air-bubbles in the swirls of the ship's wake.

The sea - this truth must be confessed - has no generosity. No display of manly qualities - courage, hardihood, endurance, faithfulness - has ever been known to touch its irresponsible consciousness of power.

Your strength is just an accident owed to the weakness of others.

The sea never changes and its works, for all the talks of men, are wrapped in mystery.

It's only those who do nothing that make no mistakes, I suppose.

Facing it, always facing it, that's the way to get through. Face it.

The sea has never been friendly to man. At most it has been the accomplice of human restlessness.

It is to be remarked that a good many people are born curiously unfitted for the fate waiting them on this earth.

Vanity plays lurid tricks with our memory, and the truth of every passion wants some pretence to make it live.

Everything belonged to him--but that was a trifle. The thing to know was what he belonged to, how many powers of darkness claimed him for their own.

Yet, when one thinks of it, diplomacy without force is a but a rotten reed to lean upon.

It occurred to me that my speech or my silence, indeed any action of mine, would be a mere futility.

The atmosphere of officialdom would kill anything that breathes the air of human endeavour, would extinguish hope and fear alike in the supremacy of paper and ink.