Before have a look on best John Lewis quotes, you can learn more about John Lewis from Wikipedia.

We may not have chosen the time, but the time has chosen us.

It was not enough to come and listen to a great sermon or message every Sunday morning and be confined to those four walls and those four corners. You had to get out and do something.

Now we have black and white elected officials working together. Today, we have gone beyond just passing laws. Now we have to create a sense that we are one community, one family. Really, we are the American family.

Fury spends itself pretty quickly when there's no fury facing it. 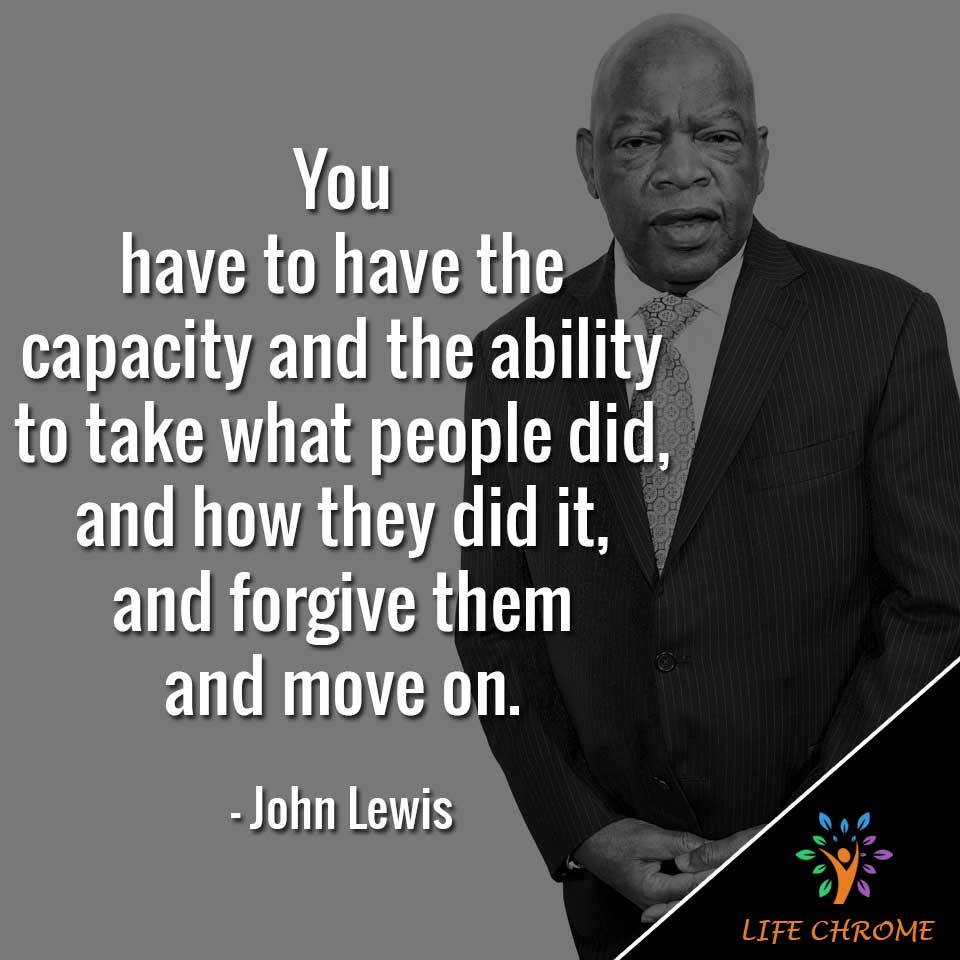 Rioting is not a movement. It is not an act of civil disobedience. I think it is a mistake for people to consider disorganized action, mayhem, and attacks on other people and property as an extension of any kind of movement. It is not. It is simply an explosion of emotion. That's all. There is nothing constructive about it. It is destructive.

I loved going to the library. It was the first time I ever saw Black newspapers and magazines like JET, Ebony, the Baltimore Afro-American, or the Chicago Defender. And I’ll never forget my librarian.

I believe in freedom of speech, but I also believe that we have an obligation to condemn speech that is racist, bigoted, anti-Semitic, or hateful.

To make it hard, to make it difficult almost impossible for people to cast a vote is not in keeping with the democratic process.

You have to have the capacity and the ability to take what people did, and how they did it, and forgive them and move on.

If you're not hopeful and optimistic, then you just give up. You have to take the long hard look and just believe that if you're consistent, you will succeed.

My parents told me in the very beginning as a young child when I raised the question about segregation and racial discrimination, they told me not to get in the way, not to get in trouble, not to make any noise.

My mother and father and many of my relatives had been sharecroppers.

The documented incidences of voter fraud are very rare, yet throughout the country, forces have mobilized in over 30 states to stop it. These efforts are very partisan.

I would say the country is a different country. It is a better country. The signs I saw when I was growing up are gone and they will not return. In many ways the walls of segregation have been torn down.

In the past the great majority of minority voters, in Ohio and other places that means African American voters, cast a large percentage of their votes during the early voting process.

When I was a student, I studied philosophy and religion. I talked about being patient. Some people say I was too hopeful, too optimistic, but you have to be optimistic just in keeping with the philosophy of non-violence. 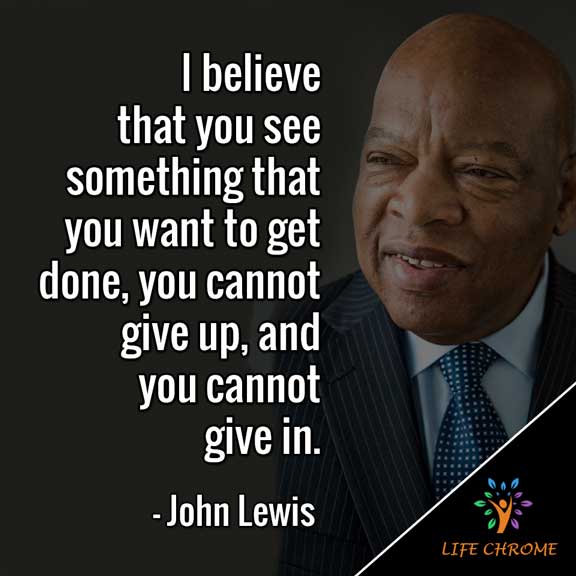 The government, both state and federal, has a duty to be reasonable and accommodating.

The civil rights movement was based on faith. Many of us who were participants in this movement saw our involvement as an extension of our faith. We saw ourselves doing the work of the Almighty. Segregation and racial discrimination were not in keeping with our faith, so we had to do something.

If someone had told me in 1963 that one day I would be in Congress, I would have said, 'You're crazy. You don't know what you're talking about.

It's something we've needed for a long time.

The vote is the most powerful nonviolent tool we have.

I don't think the federation has a head; its neck has just grown up and haired over.

The vote controls everything that you do.

The vote is precious. It's almost sacred, so go out and vote like you never voted before.

MLK, Jr. taught me how to say no to segregation, and I can hear him saying now... when you straighten up your back, no man can ride you. He said stand up straight and say no to racial discrimination.

Sen. McCain and Gov. Palin are sowing the seeds of hatred and division, and there is no need for this hostility in our political discourse.

Be hopeful. Be optimistic. Never lose that sense of hope. 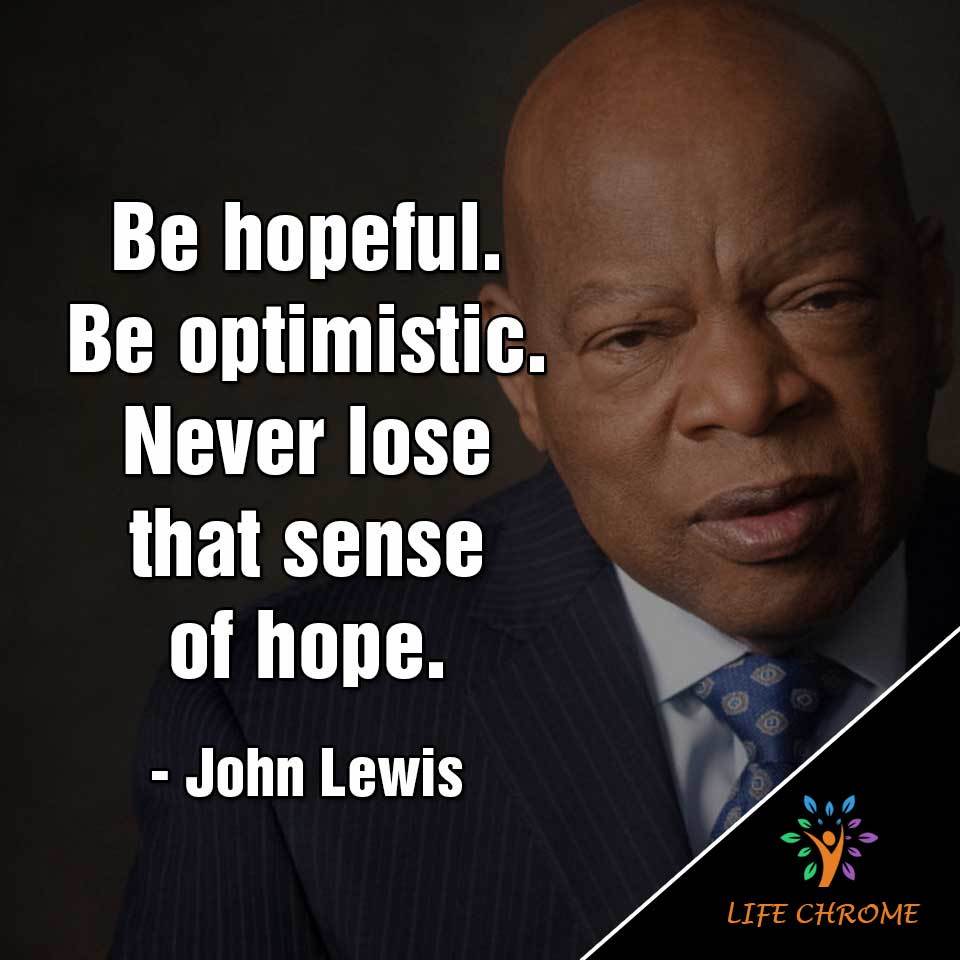 Ornette Coleman is doing the only really new thing in jazz since the innovations in the mid-forties of Dizzy Gillespie, Charlie Parker, and those of Thelonious Monk.

I don't have any extraordinary gifts. I'm just an average Joe who grew up very poor in rural Alabama.

But you have to have hope. You have to be optimistic in order to continue to move forward.

It is our hope that when people read "March" - Book One, Book Two, and Book Three - that they will understand that another generation of people, especially young people, were deeply inspired by the work of Rosa Parks, Martin Luther King Jr. and many others.

The book Martin Luther King and the Montgomery Story, I read it when I was about 17-and-a-half or 18. It changed my life.

I'm gonna say that I have followed every presidential campaign since the campaign of President [John F.] Kennedy in 1960.

Every generation leaves behind a legacy. What that legacy will be is determined by the people of that generation. What legacy do you want to leave behind?

You cannot be afraid to speak up and speak out for what you believe. You have to have courage, raw courage. 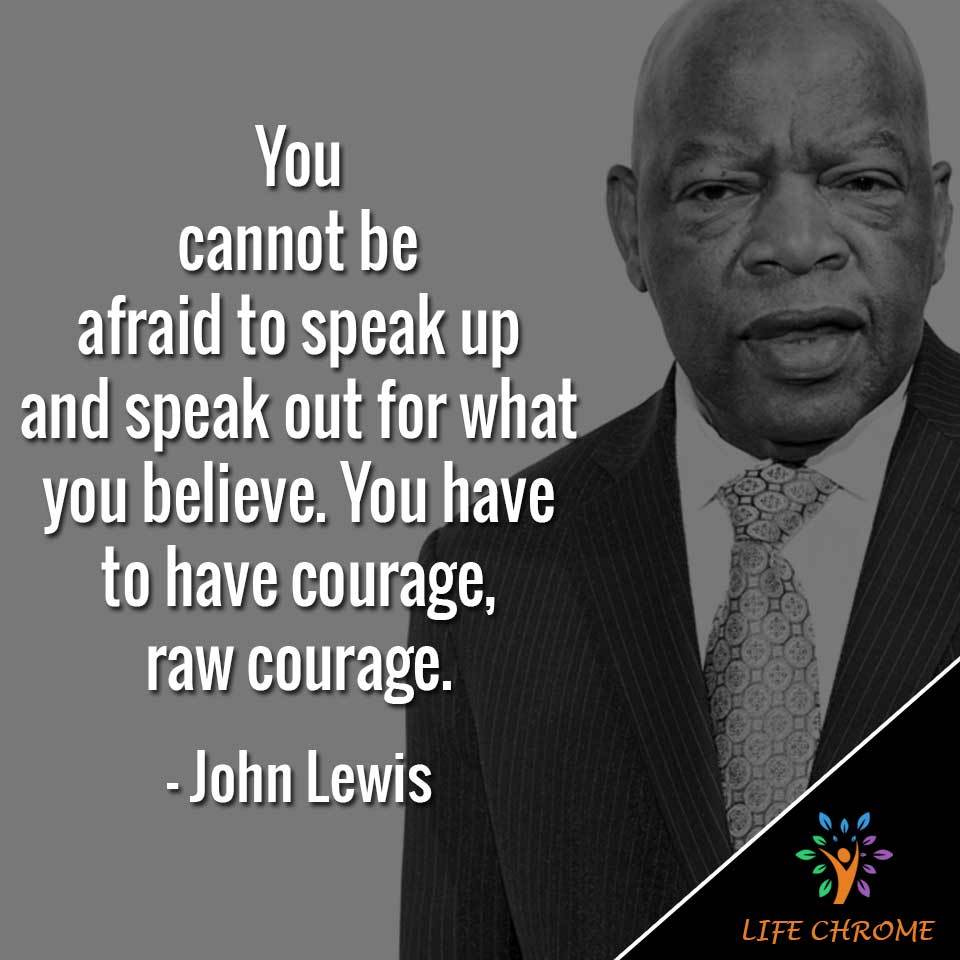 Some people think that [it was] Martin Luther King Jr.'s idea to have a boycott. It was a black woman, a teacher, who said we should boycott the buses. You had people like Fannie Lou Hamer; Delta, Mississippi.

I met Rosa Parks when I was 17. I met Dr. [Martin Luther] King when I was 18. These two individuals inspired me to find a way to get in the way, to get in trouble. So I got in good trouble, necessary trouble.

This book [March], in my estimation, is a road map. It is a change agent. It is saying to people, "This is a way".

I heard Dr. King speaking on the radio, and it seemed like he was saying, "John Robert Lewis, you too can make a contribution. You can get involved!

It is my hope that people today will see that, in another time, in another period, when we saw the need for people to speak up, to organize, to mobilize, and to do something about injustice, we came together.

We built a coalition of conscience, and that we can do it again, and we can go forward, and help redeem the soul of America.

I happen to believe that this election year [2016] is...one of the most important elections that we're going to face in a very long time. I know we hear from time to time that every election is important. This one is very, very important.

Be prepared to organize nonviolent workshops - a teach-in around what is happening in America today. Organize your teachers and schoolmates, and be prepared to engage in some action.

We never gave up. We didn't get lost in a sea of despair. We kept the faith. We kept pushing and pulling. We kept marching. And we made some progress.

If you see something that is not right, not fair, not just, you have a moral obligation to do something about it. 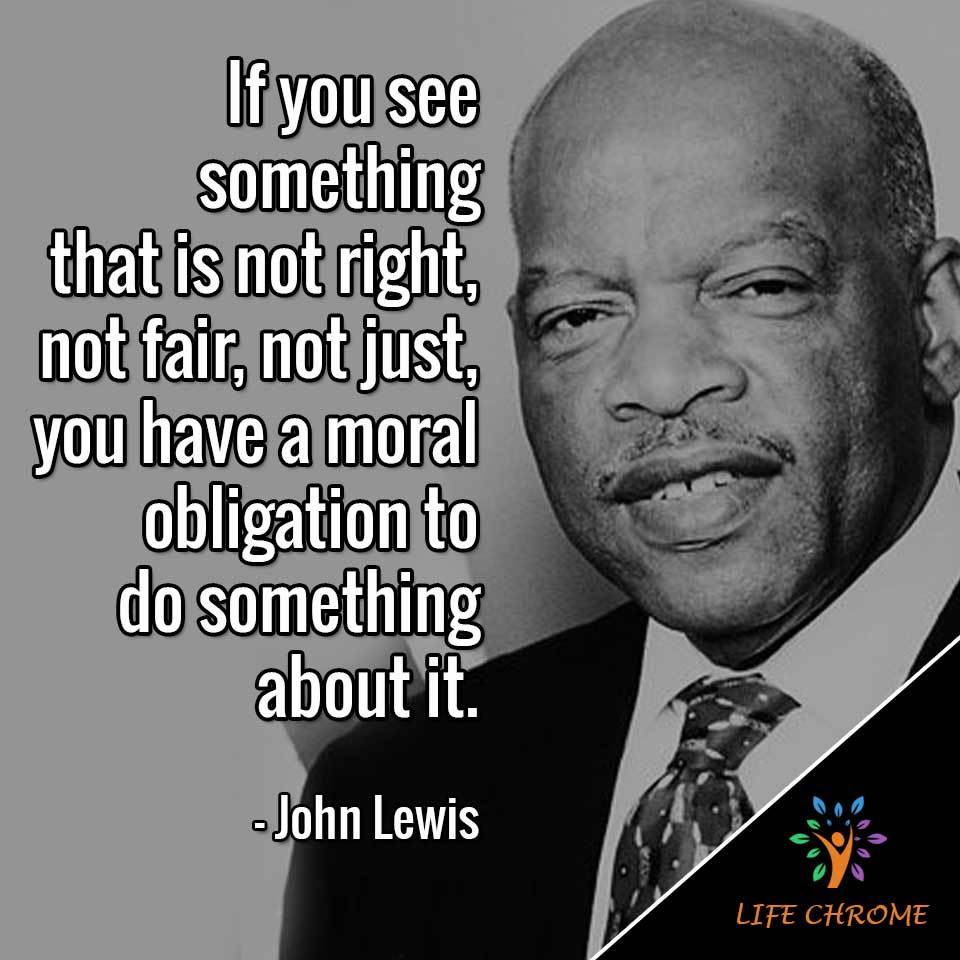 When I was 15 years old in the tenth grade, I heard Martin Luther King, Jr. Three years later, when I was 18, I met Dr. King and we became friends. Two years after that I became very involved in the civil rights movement. I was in college at the time. As I got more and more involved, I saw politics as a means of bringing about change.

I think all Americans should be hopeful, and try to be optimistic.

I think Donald Trump is dividing the American people. He is not good for America. It's not good for our standing in the rest of the world. To divide people based on race, a color, a religion, a sexual orientation, it's just ... it's just wrong.

People should organize people to just turn up and participate in the democratic process. Knock on doors. They may not be old enough to register to vote, but they can urge their teachers, their parents, their grandparents, their mothers, their fathers, and others to get out and vote.

In spite of all of the things, the issues, that we may be confronting today, I'm very hopeful, very optimistic about the future.

Medgar Evers was assassinated in his driveway retuning from an NAACP meeting in downtown Jackson. And then you go back there years later, and the blood is still on the driveway. They cannot wash it away.

Don`t give up! Don`t give in! Keep the faith! And keep your eyes on the prize!

I've said it in the past and I'll say it again today: the vote is precious; it's almost sacred.

I would like to think that we have made much more progress, that we've come much further, to have someone like a Donald Trump to emerge as the nominee of a major political party.

We will stand up for what is right, for what is fair and what is just. Health care is a right and not a privilege.

I truly believe that one day we will get there, we will arrive. And if we do it right in America, maybe, just maybe, we can serve as a model for the rest of the world.

I have fought too hard and for too long against discrimination based on race and color not to stand up against discrimination based on sexual orientation. I've heard the reasons for opposing civil marriage for same-sex couples. Cut through the distractions, and they stink of the same fear, hatred and intolerance I have known in racism and in bigotry.

I would say to a young person: continue to study. Study what is taking place in your community, in your neighborhood, maybe at your school.