Before start reading all the best JK Rowling quotes, you can learn more about JK Rowling from Wikipedia if you don't know too much about this legend.

If you want to know what a man's like, take a good look at how he treats his inferiors, not his equals.

As is a tale, so is life: not how long it is, but how good it is, is what matters.

It is our choices, Harry, that show what we truly are, far more than our abilities.

Destiny is a name often given in retrospect to choices that had dramatic consequences.

It does not do to dwell on dreams and forget to live.

Whether you come back by page or by the big screen, Hogwarts will always be there to welcome you home.

I solemnly swear that I am up to no good.

Talent and intelligence never yet inoculated anyone against the caprice of the fates. 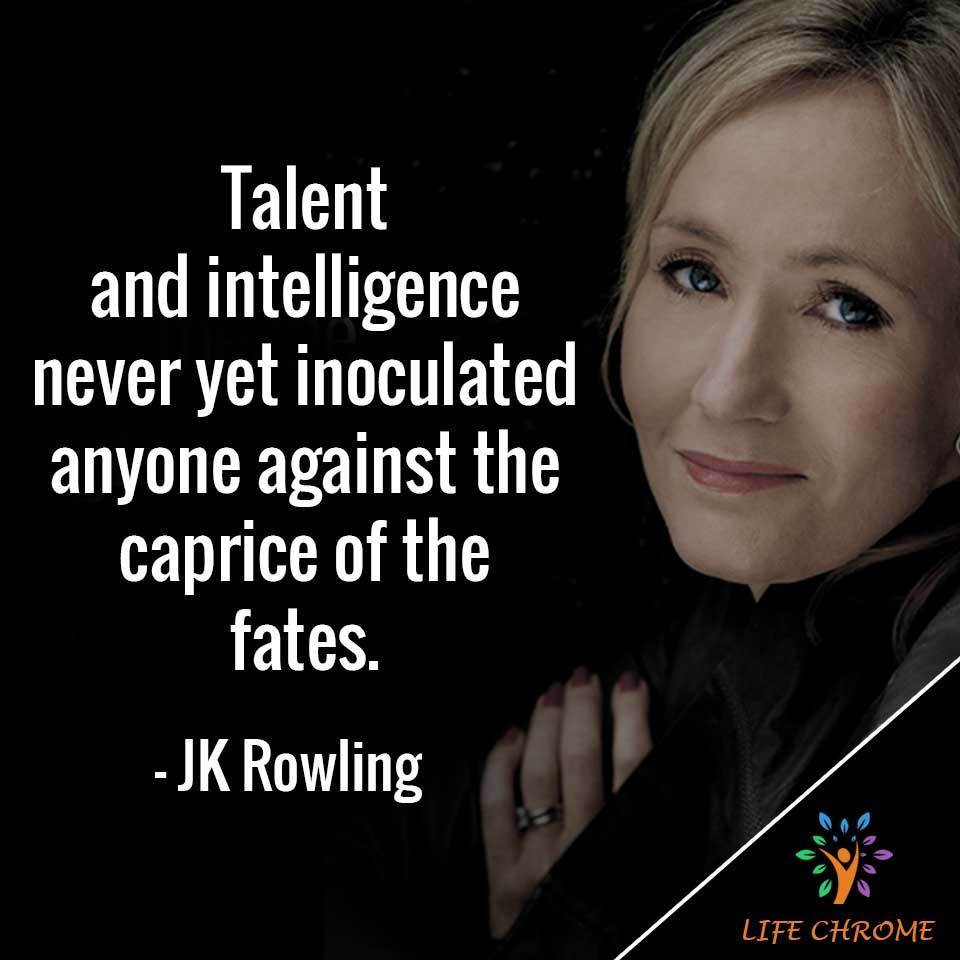 It is impossible to live without failing at something, unless you live so cautiously that you might as well not have lived at all - in which case, you fail by default.

The knowledge that you have emerged wiser and stronger from setbacks means that you are, ever after, secure in your ability to survive.

Of course it is happening inside your head, Harry, but why on earth should that mean that it is not real?

You are the true master of death, because the true master does not seek to run away from Death. He accepts that he must die, and understands that there are far, far worse things in the living world than dying.

It is no good and evil, there are only power and those too weak to seek it.

To the well-organized mind, death is but the next great adventure.

It matters not what someone is born, but what they grow to be.

Do not pity the dead, Harry. Pity the living, and, above all those who live without love.

We do not need magic to change the world, we carry all the power we need inside ourselves already: we have the power to imagine better.

Dumbledore watched her fly away, and as her silvery glow faded he turned back to Snape, and his eyes were full of tears. "After all this time?" "Always," said Snape.

The truth." Dumbledore sighed. "It is a beautiful and terrible thing, and should therefore be treated with great caution.

We're all human, aren't we? Every human life is worth the same, and worth saving. 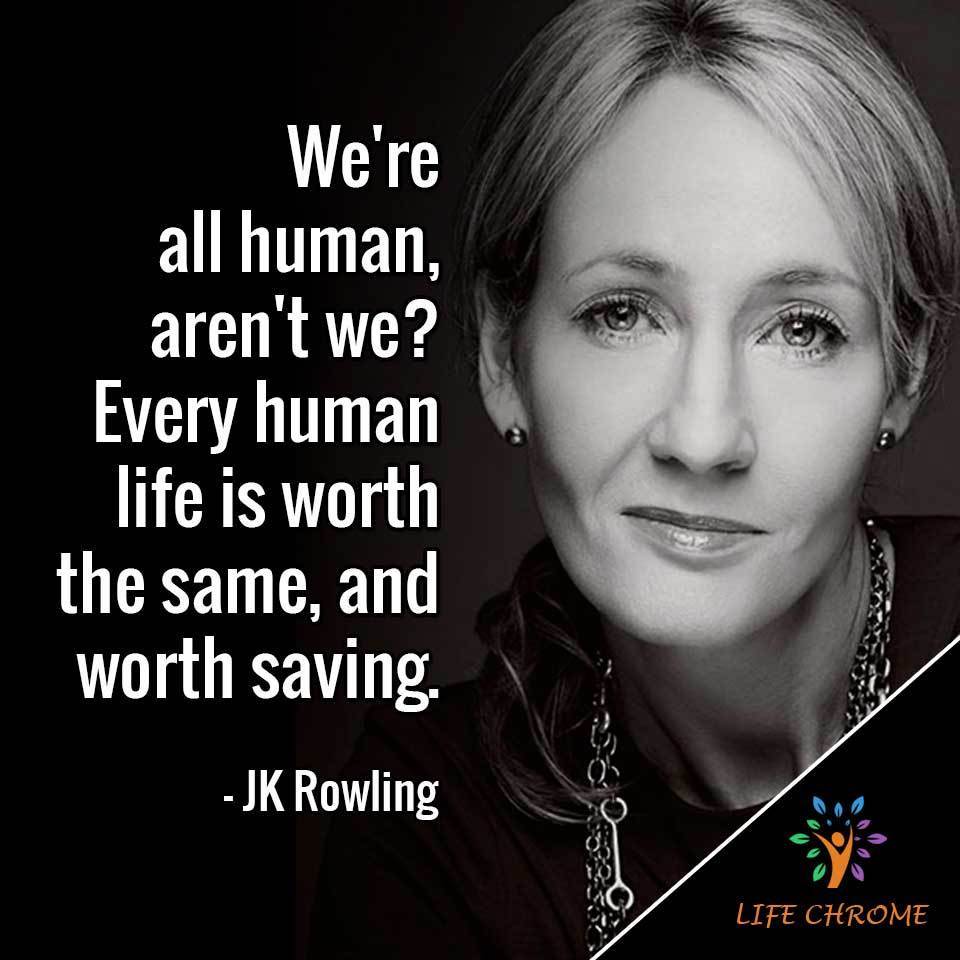 Just because you have the emotional range of a teaspoon doesn't mean we all have.

Numbing the pain for a while will make it worse when you finally feel it.

Failure means a stripping away of the inessential.

Those who choose not to empathize enable real monsters, for without ever committing an act of outright evil ourselves we collude with it through our apathy.

Wit beyond measure is a man's greatest treasure.

He can run faster than Severus Snape confronted with shampoo.

Happiness can be found, even in the darkest of times, if one only remembers to turn on the light.

We are only as strong as we are united, as weak as we are divided.

Death's got an Invisibility Cloak?" Harry interrupted again. "So he can sneak up on people," said Ron. "Sometimes he gets bored of running at them, flapping his arms and shrieking.

Indifference and neglect often do much more damage than outright dislike.

You're a prefect? Oh Ronnie! That's everyone in the family!" "What are Fred and I? Next door neighbors?

No man or woman alive, magical or not, has ever escaped some form of injury, whether physical, mental, or emotional. To hurt is as human as to breathe.

It is the unknown we fear when we look upon death and darkness, nothing more.

Your conception of failure might not be too far removed from the average person’s idea of success. 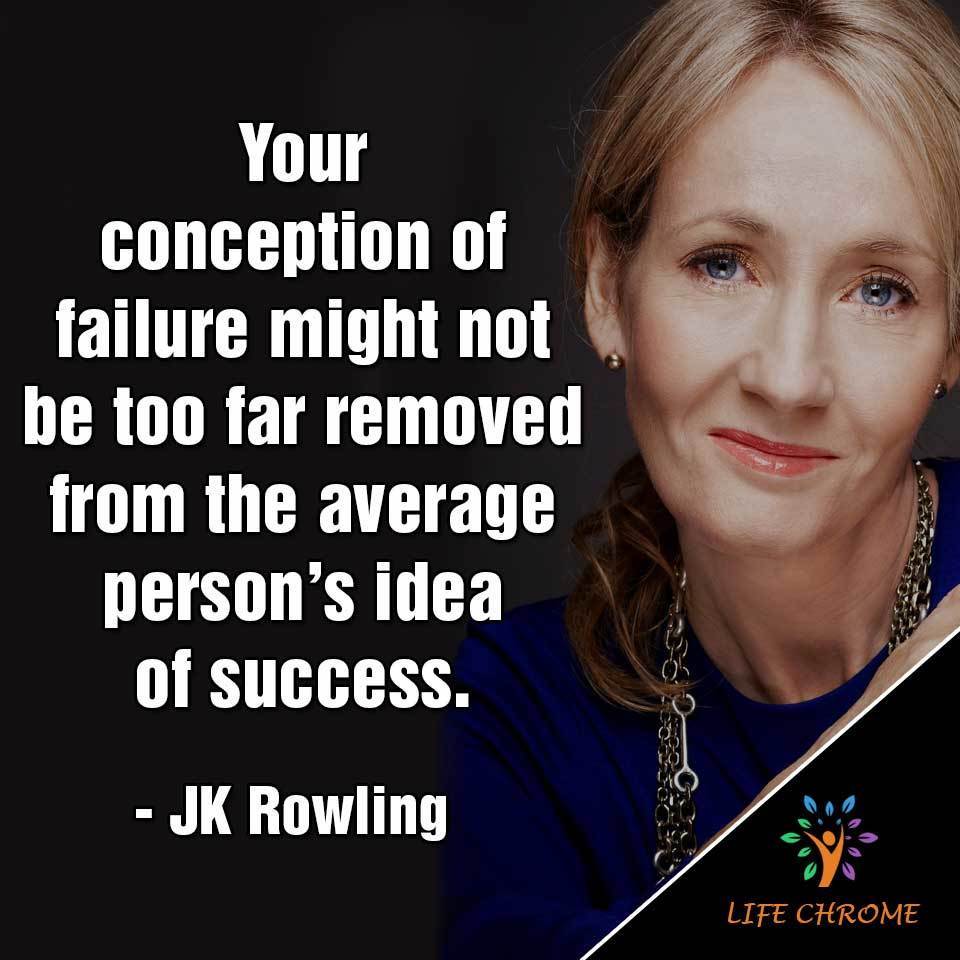 I don't go looking for trouble. Trouble usually finds me.

We've all got both light and dark inside us. What matters is the part we choose to act on. That's who we really are.

Imagination is not only the uniquely human capacity to envision that which is not, and therefore the fount of all invention and innovation. In its arguably most transformative and revelatory capacity, it is the power to that enables us to empathize with humans whose experiences we have never shared.

Not my daughter, you bitch!

Imagination is the foundation of all invention and innovation.

Are you the sort of person who gloats when they see a woman fall, or the kind that celebrates a magnificent recovery?

Percy wouldn't notice a joke if it danced naked in front of him wearing one of Dobby's hats.

You haven't got a letter on yours," George observed. "I suppose she thinks you don't forget your name. But we're not stupid-we know we're called Gred and Forge.

There is an expiry date on blaming your parents for steering you in the wrong direction; the moment you are old enough to take the wheel, responsibility lies with you.

You will never truly know yourself, or the strength of your relationships, until both have been tested by adversity.

Books are like mirrors: if a fool looks in, you cannot expect a genius to look out.

I believe in free will. Of those that, like us, are in a privileged situation at least. For you, for me: people who are living in western society, people who are not repressed, who are free. We can choose. The things go largely like you want them to go.

You control your own life. Your own will is extremely powerful. 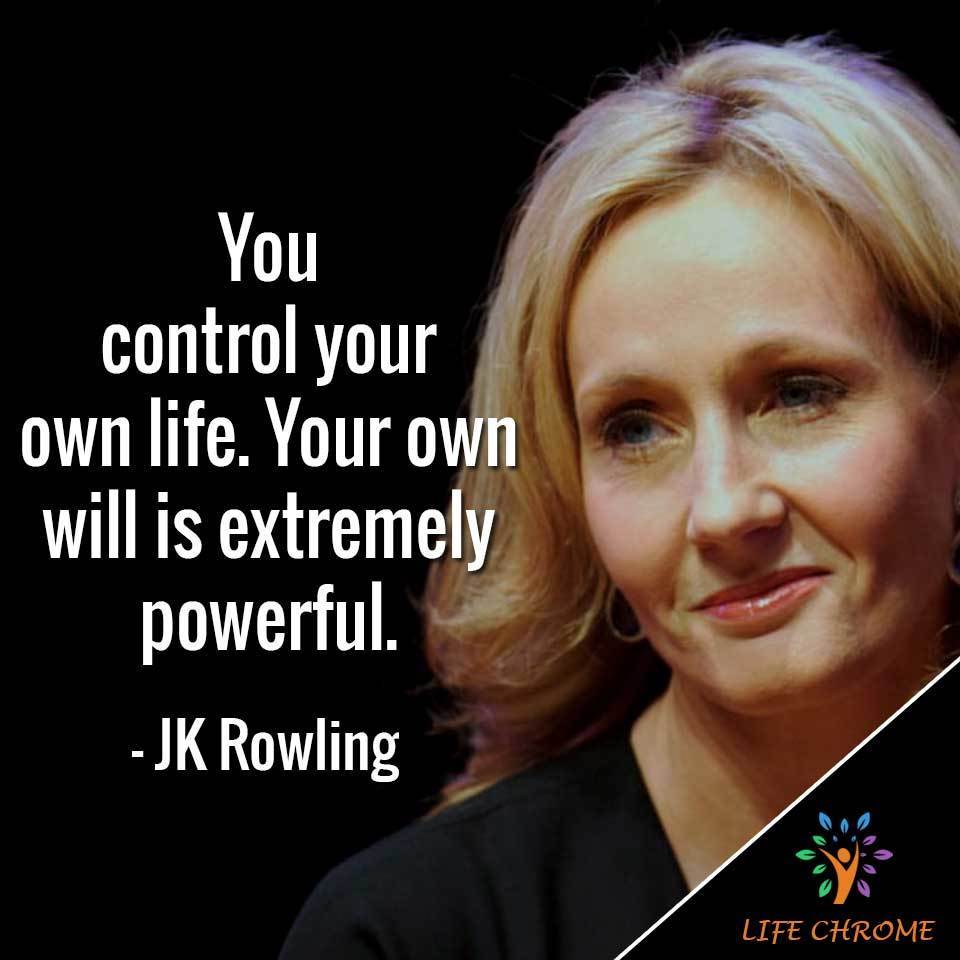 And the idea of just wandering off to a cafe with a notebook and writing and seeing where that takes me for awhile is just bliss.

I have never been remotely ashamed of having been depressed. Never. What’s to be ashamed of? I went through a really rough time and I am quite proud that I got out of that.

Don't talk to me." "Why not?" "Because I want to fix that in my memory for ever. Draco Malfoy, the amazing bouncing ferret.

You will also find that help will always be given at Hogwarts to those who ask for it.

Whatever money you might have, self-worth really lies in finding out what you do best.

Just think how many books I could've sold if Harry had been a bit more creative with his wand.

I don’t think there’s any harm at all in allowing a kid to fantasize. In fact, I think to stop people from fantasizing is a very destructive thing indeed.

You know, Minister, I disagree with Dumbledore on many counts...but you cannot deny he's got style.

Failure meant a stripping away of the inessential. I stopped pretending to myself that I was anything other than what I was, and began to direct all my energy into finishing the only work that mattered to me. Had I really succeeded at anything else, I might never have found the determination to succeed in the one arena I believed I truly belonged.

Why are they all staring?" demanded Albus as he and Rose craned around to look at the other students. "Don’t let it worry you," said Ron. "It’s me. I’m extremely famous.

The most important thing is to read as much as you can, like I did. It will give you an understanding of what makes good writing and it will enlarge your vocabulary.

Failure is not fun. It can be awful. But living so cautiously that you never fail is worse. 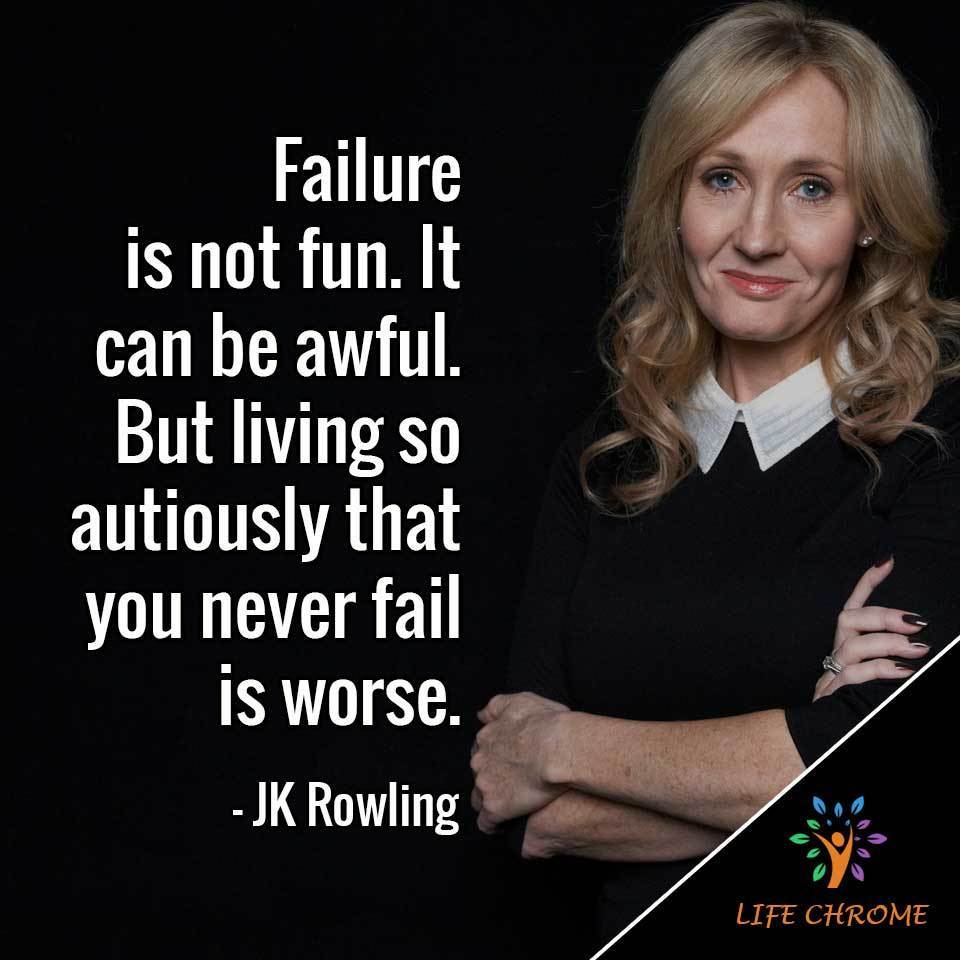 What’s most important in a friendship? Tolerance and loyalty.

You’ve got to work. It’s about structure. Its about discipline. It’s all these deadly things that your schoolteacher told you you needed…you need it.

We can’t choose our fate, but we can choose others. Be careful in knowing that.

The truth is always easier than a lie or an evasion -easier to deal with and easier to live with.

Let us step into the night and pursue that flighty temptress, adventure.

Holey? You have the the whole world of ear-related humor before you, you go for holey?

I find that discussing an idea out loud is often the way to kill it stone dead.

I would like to be remembered as someone who did the best she could with the talent she had.

I think it’s the books that you read when you’re young that live with you forever.

Youth cannot know how age thinks and feels. But old men are guilty if they forget what it was to be young.

Dumbledore says people find it far easier to forgive others for being wrong than being right.

The moment you are old enough to take the wheel, responsibility lies with you.

Fear of a name increases fear of the thing itself.