A man is literally what he thinks, his character being the complete sum of all his thoughts.

The world steps aside for the man who knows where he is going.

Whether you be man or woman you will never do anything in this world without courage. It is the greatest quality of the mind next to honor. 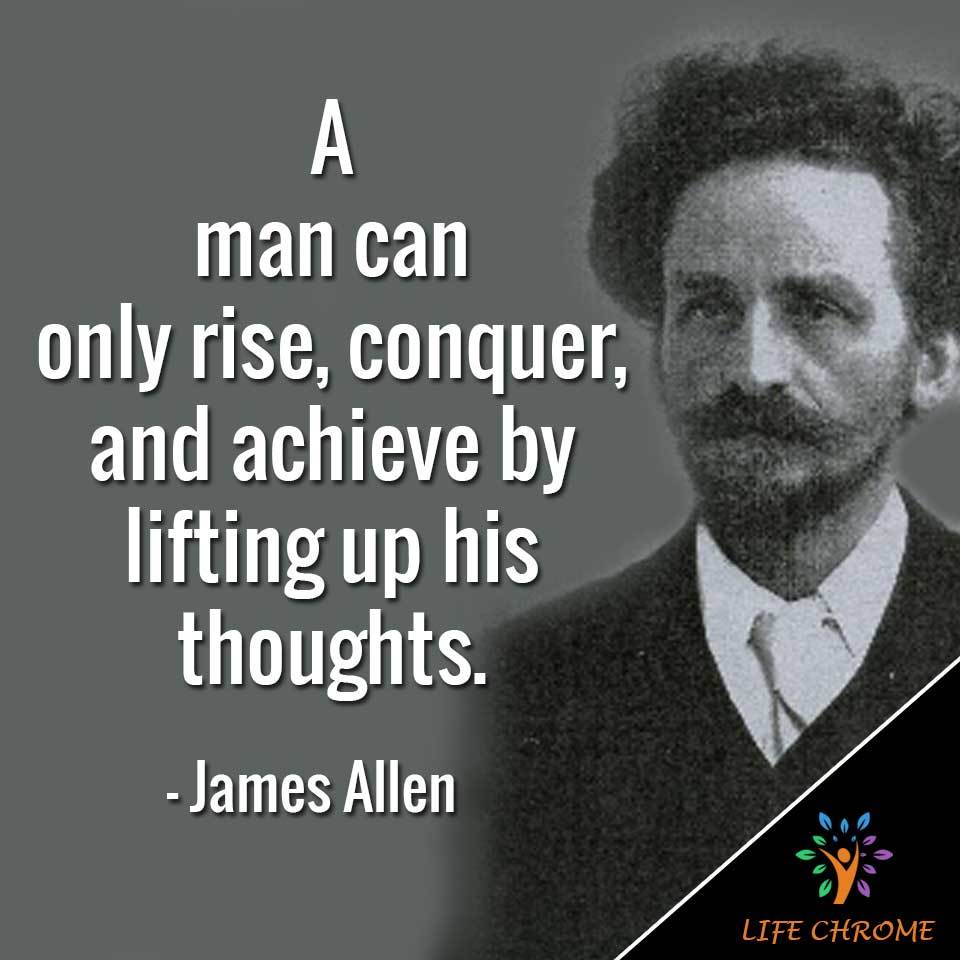 As he thinks, so he is; as he continues to think, so he remains.

Man is made or unmade by himself. By the right choice he ascends. As a being of power, intelligence, and love, and the lord of his own thoughts, he holds the key to every situation.

For you will always gravitate toward that which you, secretly, most love.

A man can only rise, conquer, and achieve by lifting up his thoughts.

The man who does not shrink from self-crucifixion can never fail to accomplish the object upon which the heart is set.

Spiritual meditation is the pathway to Divinity. It is a mystic ladder which reaches from earth to heaven, from error to Truth, from pain to peace.

A man's mind may be likened to a garden, which may be intelligently cultivated or allowed to run wild; but whether cultivated or neglected, it must, and will, bring forth. If no useful seeds are put into it, then an abundance of useless weed seeds will fall therein, and will continue to produce their kind.

​There can be no progress nor achievement without sacrifice, and a man's worldly success will be by the measure that he sacrifices his confused animal thoughts, and fixes his mind on the development of his plans, and the strengthening of his resolution and self-reliance.

Many give way when success is assured, and rapidly fall back into failur

The very fact that you are a complainer, shows that you deserve your lot.

Self-control is strength. Right thought is mastery. Calmness is power. 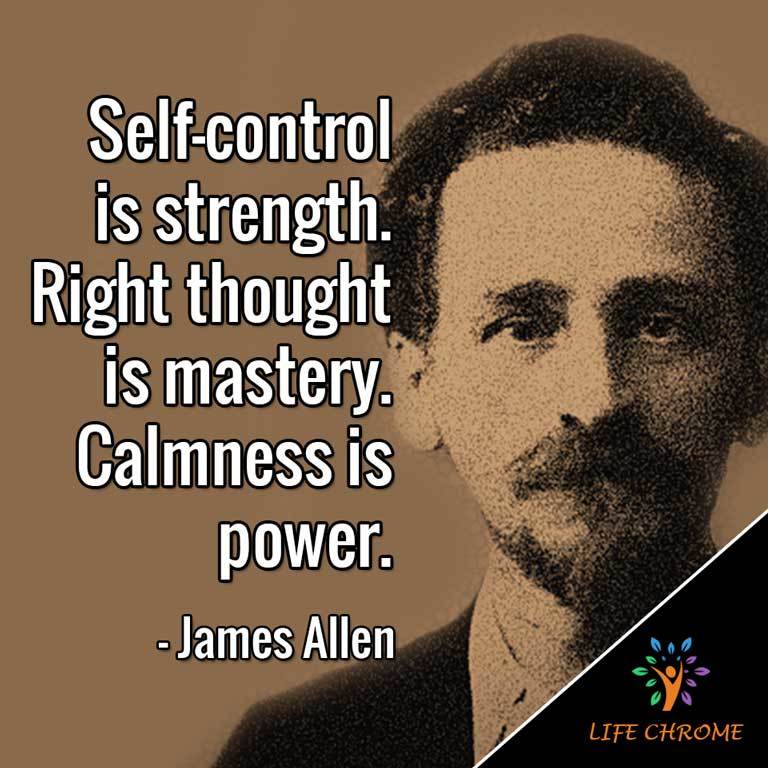 A noble and God-like character is not a thing of favor or chance, but is the natural result of continued effort in right thinking, the effect of long-cherished association with God-like thoughts.

Man, as a spiritual being, cannot be maintained in strength, uprightness, and peace except if he periodically withdraw himself from the outer world of perishable things and reach inwardly towards the abiding and imperishable realities.

Rely upon your own judgment; be true to your own conscience; follow the light that is within you; all outward lights are so many will-o'-the-wisps. There will be those who tell you that you are foolish; that your judgment is faulty; that your conscience is all awry, and that the light within you is darkness; but heed them not. If what they say is true, the sooner you, as a searcher of wisdom, find it out the better, and you can only make that discovery by bringing your powers to the test. Therefore, pursue your course bravely.

They who have no central purpose in their life fall an easy prey to petty worries, fears, troubles, and self-pitying, all of which are indications of weakness, which lead, just as surely as deliberately planned sins (though by a different route), to failure, unhappiness, and loss, for weakness cannot persist in a power evolving universe.

Man is buffeted by circumstances so long as he believes himself to be the creature of outside conditions, but when he realizes that he is a creative power, and that he may command the hidden soil and seeds of his being out of which circumstances grow, he then becomes the rightful master of himself.

Jesus brooded upon the Divine imminence until at last he could declare, 'I and my Father are One.'

Men are anxious to improve their circumstances, but are unwilling to improve themselves; they therefore remain bound. The man who does not shrink from self-crucifixion can never fail to accomplish the object upon which his heart is set. This is true of earthly as of heavenly things. Even the man whose object is to acquire wealth must be prepared to make great personal sacrifices before he can accomplish his object; and how much more so he who would realize a strong and well-poised life.

The greatest achievement was at first and for a time a dream. The oak sleeps in the acorn, the bird waits in the egg, and in the highest vision of the soul a waking angel stirs. Dreams are the seedlings of realities. 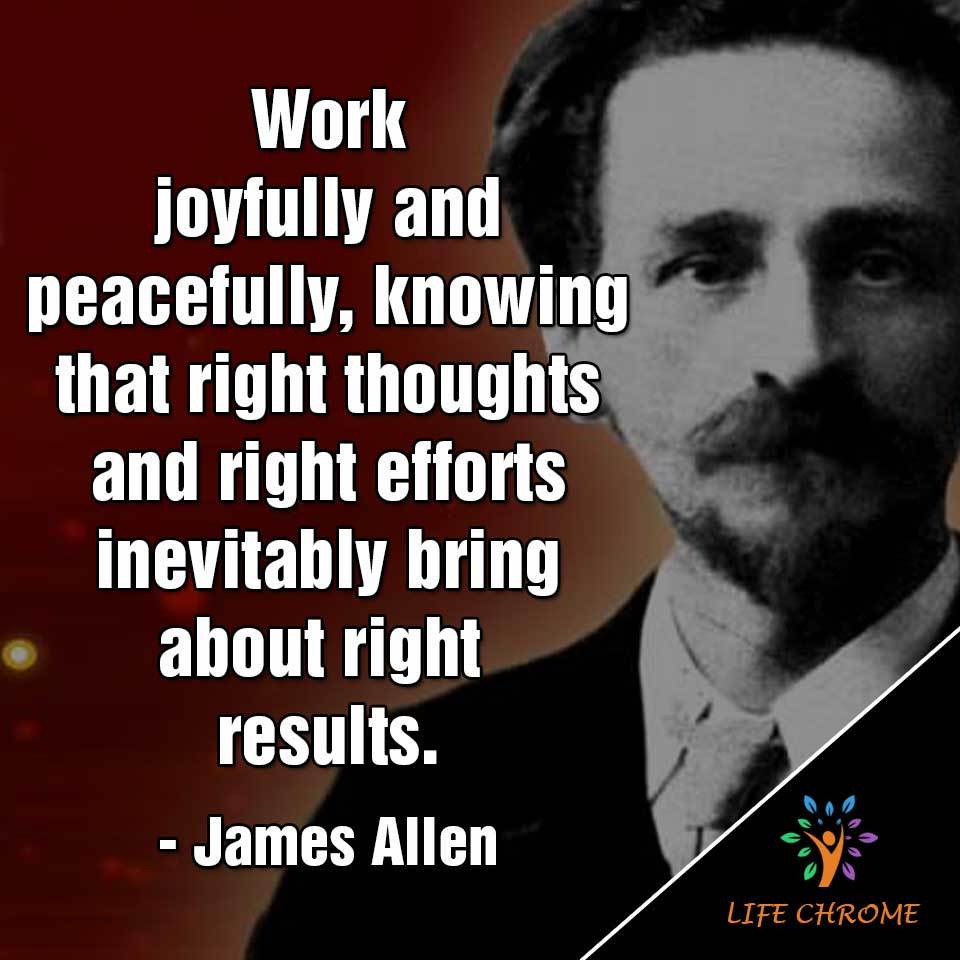 You will become as small as your controlling desire; as great as you dominant aspiration.

The more tranquil a man becomes, the greater is his success, his influence, his power for good. Calmness of mind is one of the beautiful jewels of wisdom.

All the a man achieves and all that he fails to achieve is the direct result of his own thoughts.

In all human affairs there are efforts, and there are results, and the strength of the effort is the measure of the result.

Man is manacled only by himself; thought and action are the jailers of Fate.

The man who sows wrong thoughts and deeds and prays that God will bless him is in the position of a farmer who, having sown tares, asks God to bring forth for him a harvest of wheat.

A person is limited only by the thought that he chooses. 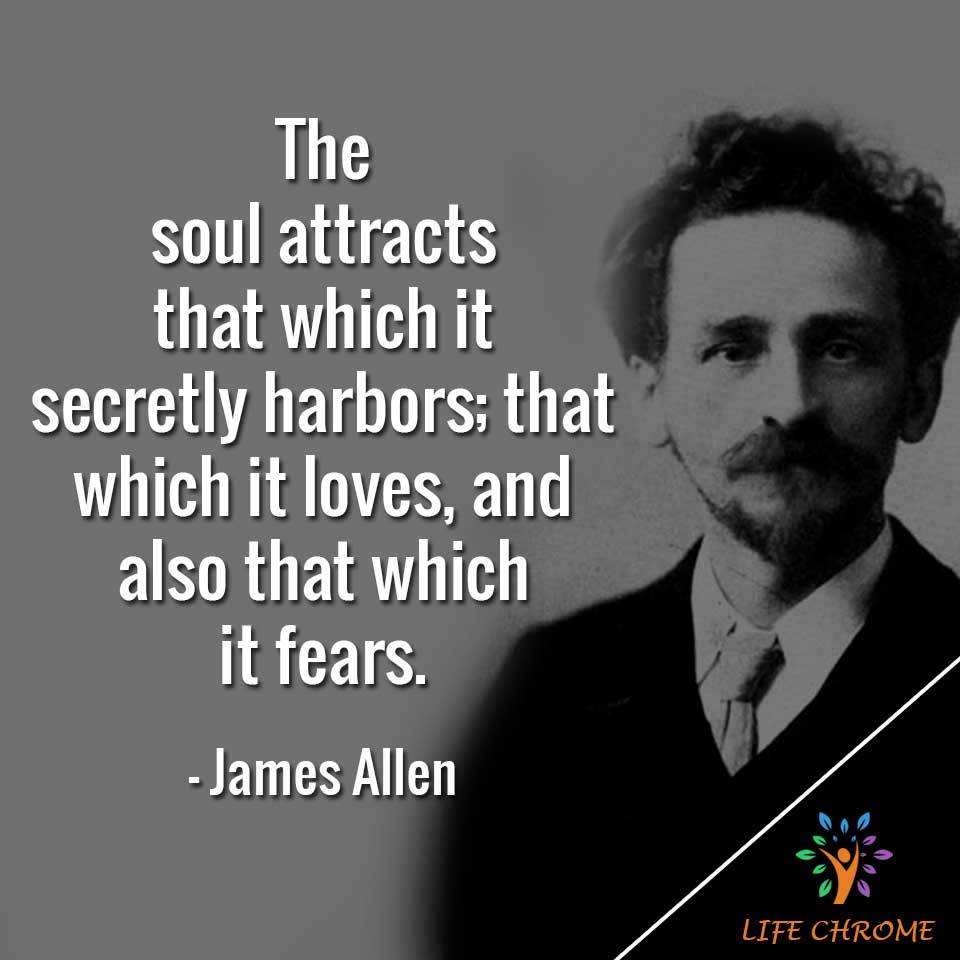 Cherish your visions. Cherish your ideals. Cherish the music that stirs in your heart, the beauty that forms in your mind, the loveliness that drapes your purest thoughts. For out of them will grow all delightful conditions, all heavenly environment, of these, if you but remain true to them, your world will at last be built.

The outer conditions of a person's life will always be found to reflect their inner beliefs.

No duty is more urgent than that of returning thanks.

Do not dwell upon the sins and mistakes of yesterday so exclusively as to have no energy and mind left for living rightly today, and do not think that the sins of yesterday can prevent you from living purely today.

A man only begins to be a man when he ceases to whine and revile, and commences to search for the hidden justice which regulates his life. And he adapts his mind to that regulating factor, he ceases to accuse others as the cause of his condition, and builds himself up in strong and noble thoughts; ceases to kick against circumstances, but begins to use them as aids to his more rapid progress, and as a means of the hidden powers and possibilities within himself.

A person is limited only by the thoughts that he chooses.

The key to happiness is having dreams; the key to success is making them come true.

All that a man achieves and all that he fails to achieve is the direct result of his own thoughts.

Man is made or unmade by himself. In the armory of thought he forges the weapons by which he destroys himself. He also fashions the tools with which he builds for himself heavenly mansions of joy and strength and peace.

As the smallest drop of water detached from the ocean contains all the qualities of the ocean, so man, detached in consciousness from the Infinite, contains within him its likeness; and as the drop of water must, by the law of its nature, ultimately find its way back to the ocean and lose itself in its silent depths, so must man, by the unfailing law of his nature, at last return to his source, and lose himself in the great ocean of the Infinite.

By the right choice and true application of thought, man ascends to the Divine Perfection.

Man is the master of thought, the molder of character, and the maker and shaper of condition, environment, and destiny. 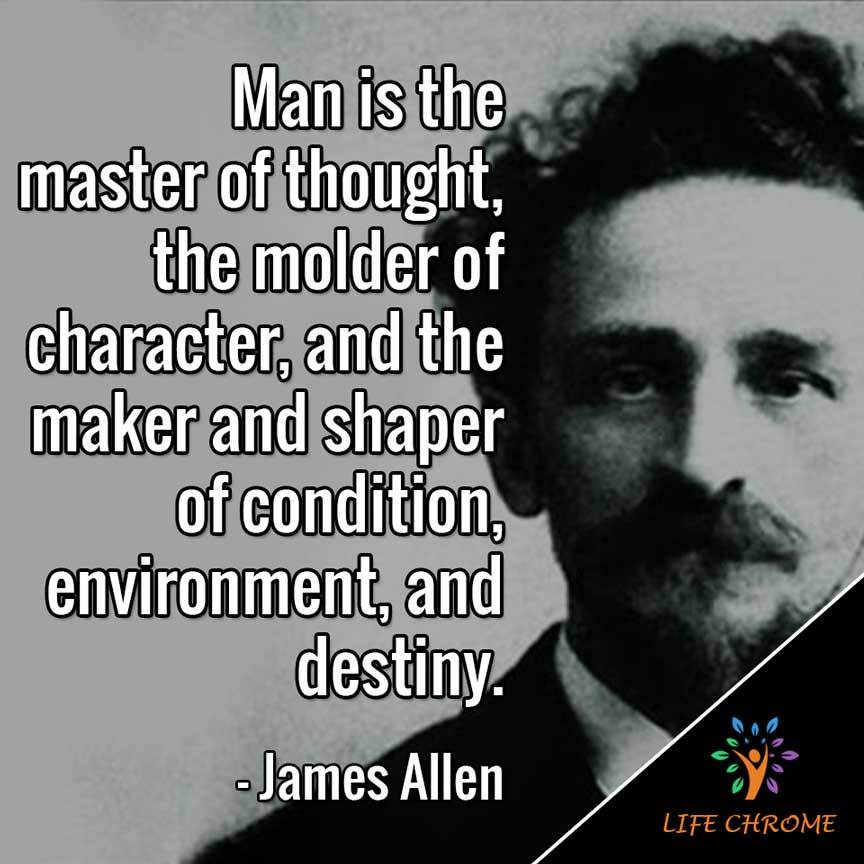 For true success ask yourself these four questions: Why? Why not? Why not me? Why not now?

Circumstances do not make the man, they reveal him.

The within is ceaselessly becoming the without. From the state of a man's heart doth proceed the conditions of his life; his thoughts blossom into deeds, and his deeds bear the fruitage of character and destiny.

Circumstance does not make the man; it reveals him to himself.

As there are silent depths in the ocean which the fiercest storm cannot reach, so there are silent, holy depths of the hearts of people which the storm of sin and sorrow can never disturb. To reach this silence and to live consciously in it is peace.

There can be no progress, no achievement without sacrifice.

He who cherishes a beautiful vision, a lofty ideal in his heart, will one day realize it.

If you would perfect your body, guard your mind.

He thinks in secret, and it comes to pass: environment is but his looking glass.

As a man thinketh in his heart, so shall he be

A man sooner or later discovers that he is the master-gardener of his soul, the director of his life.

Cease to be a disobedient child in the school of experience, and begin to learn, with humility and patience, the lessons that are set for your ultimate perfection.

If you real desire is to be good, there is no need to wait for the money before you do it; you can do it now, this very moment, and just where you are.

Calmness of mind is one of the beautiful jewels of wisdom. It is the result of long and patient effort in self-control. Its presence is an indication of ripened experience, and of a more than ordinary knowledge of the laws and operations of thought.