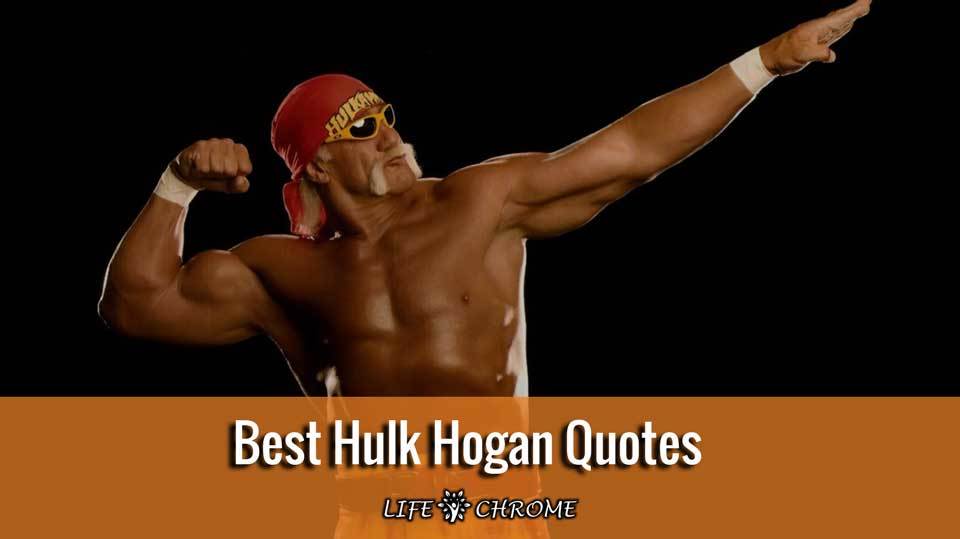 You may be interested to know Hulk Hogan quotes but do you know who is Hulk Hogan? You can learn from Wikipedia.

The best wrestlers, whether it's a Hulk Hogan or a Rey Mysterio, are the ones who have psychology and can understand this business.

The only time I'm not Hulk Hogan is when I'm behind closed doors because as soon as I walk out the front door, and somebody says hello to me, I can't just say 'hello' like Terry. When they see me, they see the blond hair, the mustache, and the bald head, they instantly think Hulk Hogan.

I'm real critical of myself and if I take the bandana off my head I'm completely bald headed and go from being 58 to looking 68 instantly.

Negativity and Hulkamania – 2 things that don’t go together.

I promised each and every Hulkamaniac when I went to that great battlefield in the sky I would bring the WWF title with me.

To all my little Hulkamaniacs, say your prayers, take your vitamins and you will never go wrong. 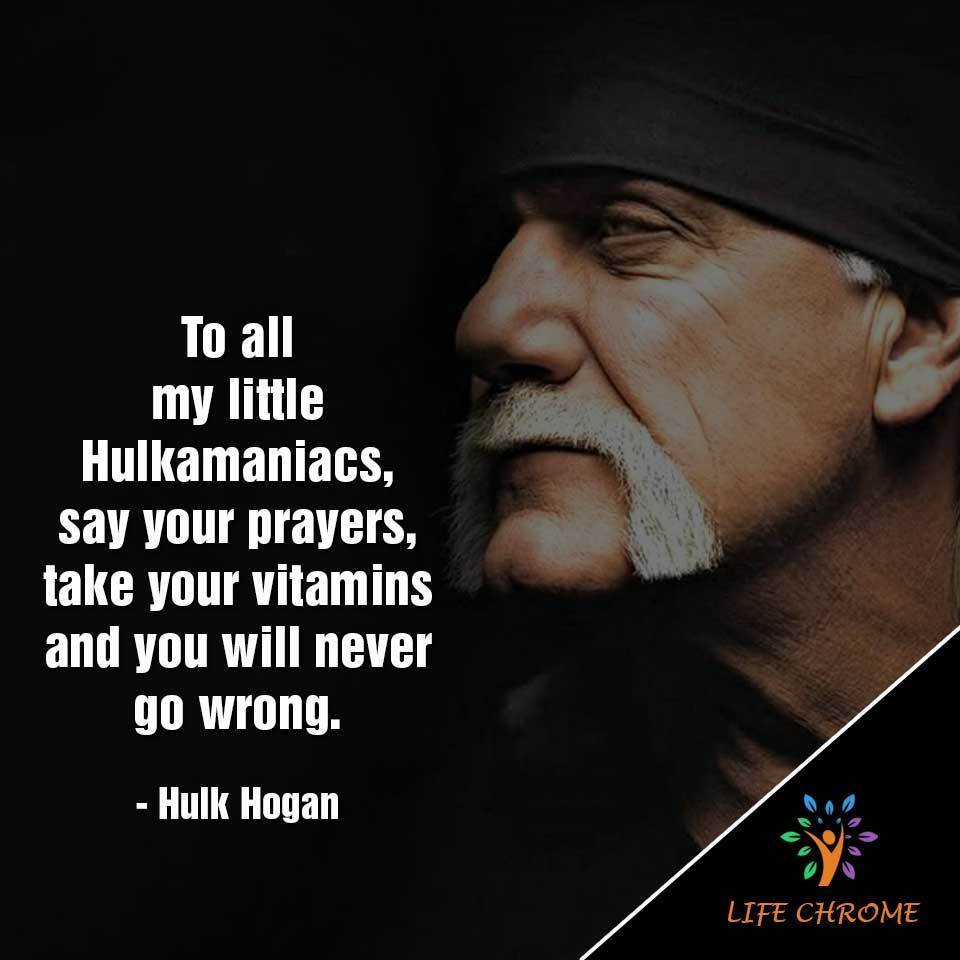 I feel really good right now. It will really be a tough decision. It's so hard to give up what you love doing. Hanging up the boots will not be an easy thing to do.

I quit doing the movies because the wrestling was going so good and was so on fire during the '80s and '90s, but I was getting all these movie scripts.

Then as I was wrestling as Terry Boulder. I was on a talk show with Lou Ferrigno, and I was actually bigger than he was! I went back to the dressing room that night and all of the wrestlers go 'Oh my God you're bigger than the hulk on TV' so they started calling me Terry 'The Hulk' Boulder.

Nobody told me how to talk or think.

Hopefully I can become the Babe Ruth of the World Wrestling Federation and be the champion at the same time.

I fear no man, no beast or evil, brother. 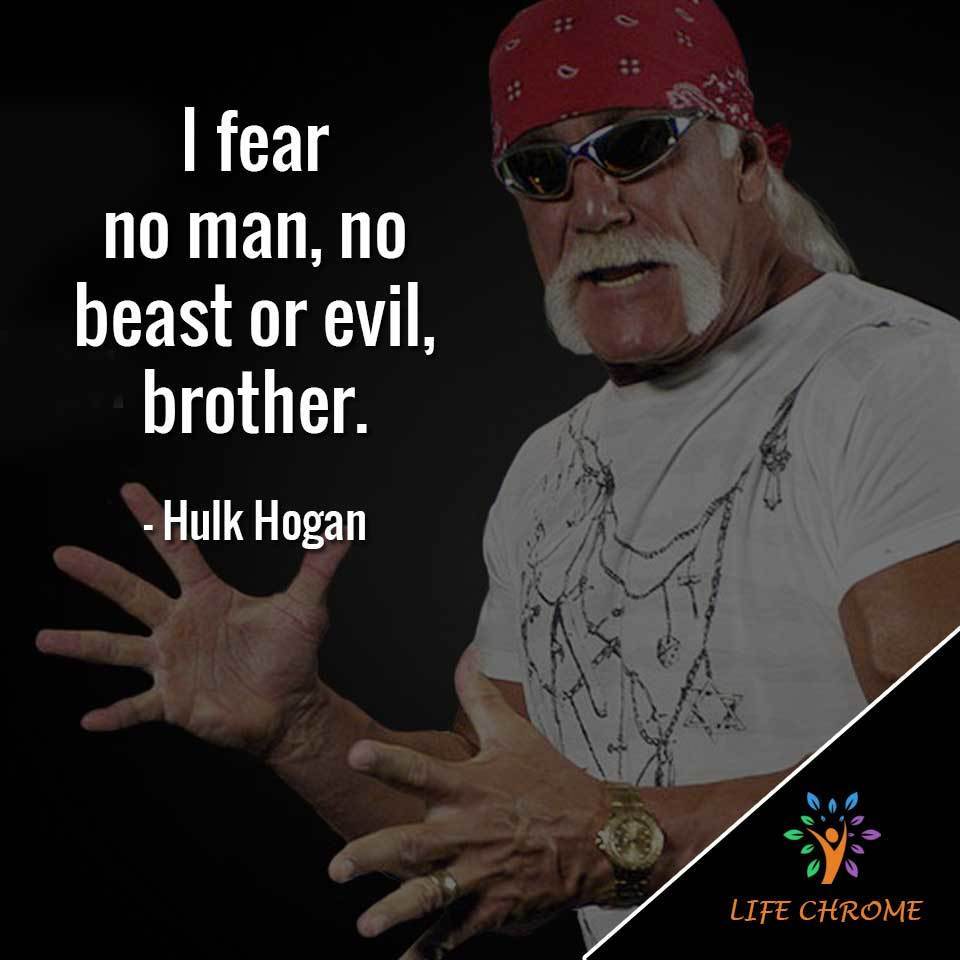 When the giant hits the ground, he feels the wrath of Hulkamania and the whole world shakes at my feet?

A lot of people didn't realize that with the carpet being pulled out from under me in such a short time frame I got to such a bad place.

I've never been in a Sweat Lodge. I, myself, personally don't even like sitting in a sauna, so I've never been to a spiritual retreat so I don't understand the whole process.

I'm loyal to a fault - even though I've been to hell and back with Vince McMahon, I would never to do anything to hurt him. But it's also survival of the fittest out there.

In the ring, it's fun to be the bad guy, but 24 hours a day, when you have to talk to kids, and you see Make-A-Wish kids that love you, the bad guy stuff is not fun. I'd rather be a good guy 24 hours a day than a bad guy just for a few minutes in the ring.

You know a lot of times wrestlers get too full of themselves. They can't separate themselves from the characters. They get used to the excitement, the energy, the lifestyle and the money and with a lot of these guys, when it stops, they self-destruct.

I woke up and realized life is great and people are awesome and life is worth living. 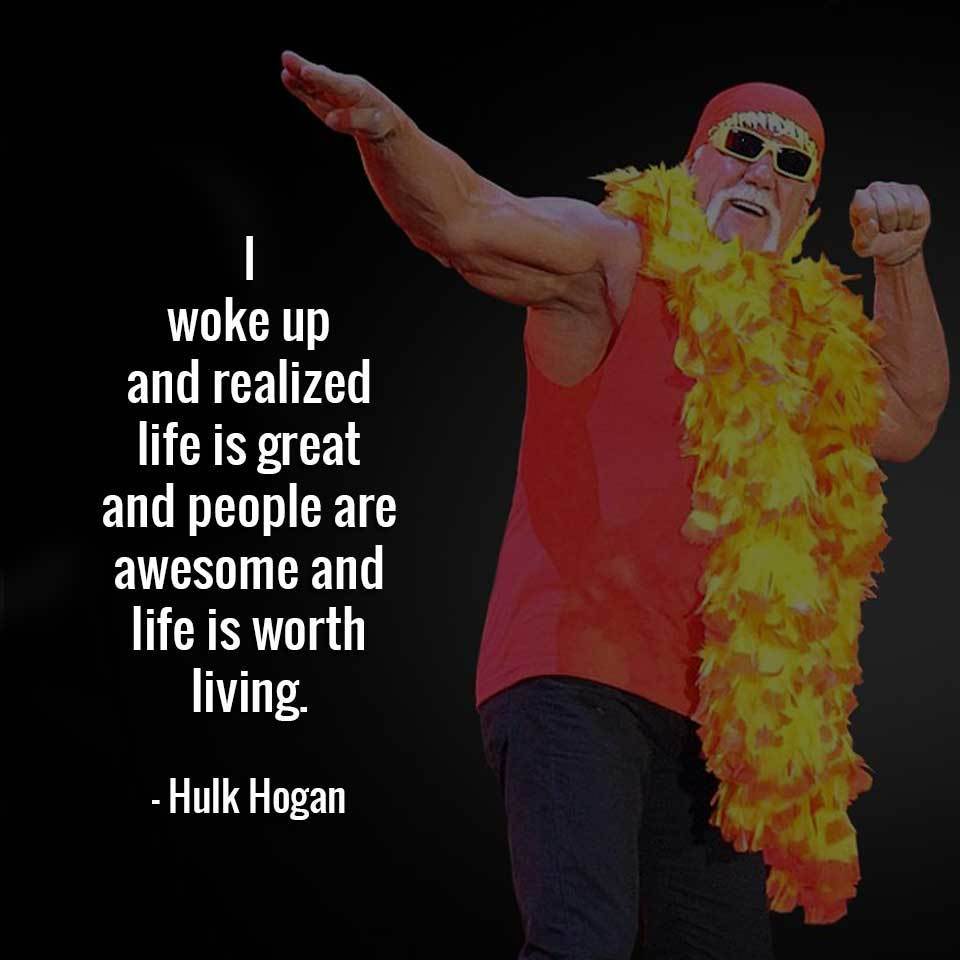 If I do hit that rope and do a hop, skip and a jump and get up as high as I can, I'm just going to hold my breath, because I know i'm going to hear all kinds of scar tissue popping.

When the script for 'The Wrestler' kept coming to me I said, This movie is so good if you put me in the film as a wrestler people are going to say, 'No credibility, Hulk Hogan isn't a good actor,' whatever Hollywood thinks of me.

Ultimate Warrior had a hell of a gimmick, but wrestling is about so much more than that. You have to be consistent, work main events every night and have matches that people really believe in and want to see.

I love to give the fans what they want. They're what I miss most when I'm not wrestling. That time in the ring is like being in heaven for me.

The leg drop was a move that nobody really used, and nobody ever hit the ropes and jumped up really high, so I tried it out in Japan and the people loved it. That's how I came up with it.

We're probably the opposite of the Osbournes. We run a very tight ship.

The coolest thing, and I have it at home, is a huge Hulk Hogan, normal-sized pinball machine.

Whenpeople come over they play it for hours. When you hit the bumpers and the bells ring it goes, 'Oh yeah!' The whole time you're playing this machine it's yelling and screaming at you, 'What you gonna do, brother?!' I think that's the coolest.

If I have a problem with someone I talk about them. I don't pick on their kids.

I'm the man that made wrestling famous.

Whatcha gonna do when Hulkamania destroys you? 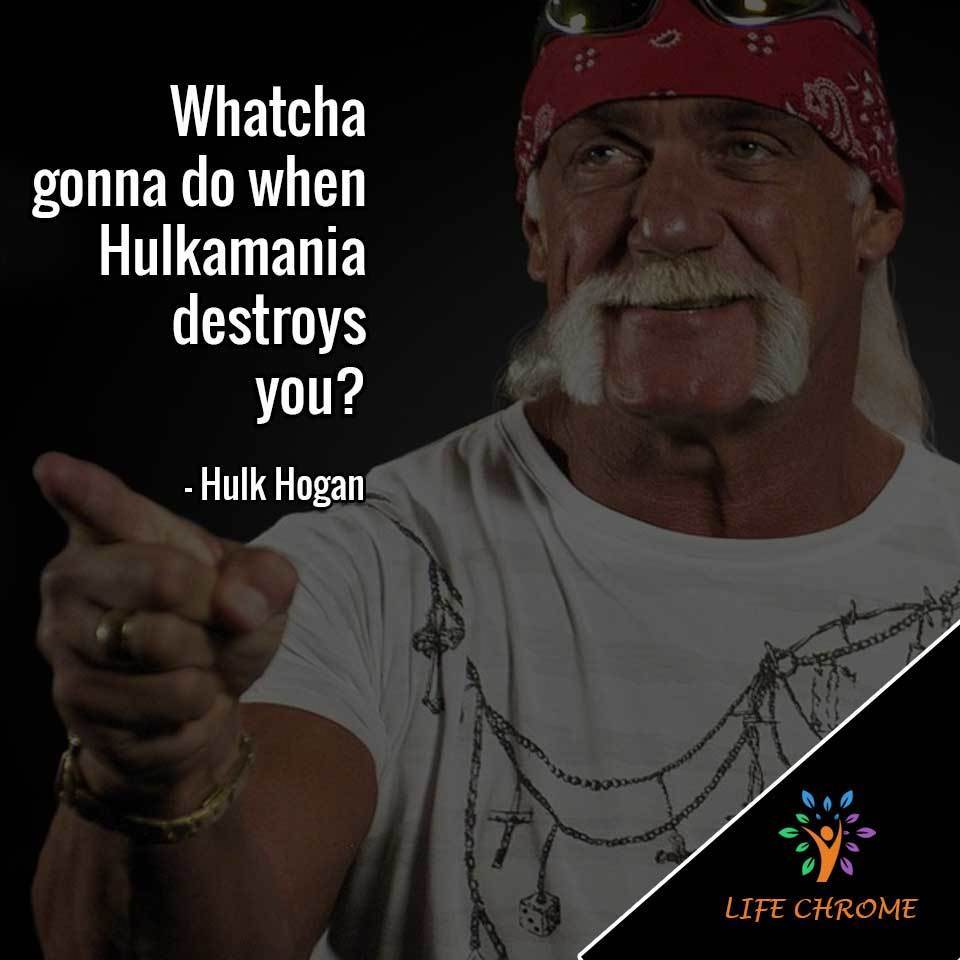 Well, you know something', Mean Gene.

I know what happens every time I get in front of a UK crowd - they just go nuts and they are so nice and excited and crazy and they won't sit down.

I'm 58 years old and I just went through 8 back surgeries. They started cutting on me in February 2009, and I was basically bed ridden for almost two years. I got a real dose of reality that if you don't have your health, you don't have anything.

I'm real good with math, with numbers, like my dad was. I'm pretty much dialed in.

I've been around so long and no matter if I've done good things or bad things, or my personal life has been good or bad, the fans have always stuck with me.

I train all the time and the weird thing is I'm in the gym with people between 20 and 25 years old and I look in the mirror and I look better than they do and they are young kids - either they haven't trained hard enough or they aren't serious enough.

When you start out in the wrestling business, you make a lot of mistakes, tripping over your own feet and looking like a fool.

I've always felt from everyone I talk to that the fans feel like I'm tangible and they can talk to me and they know me.

After watching wrestling for 20 years, I thought I had enough confidence to do it. There were no wrestling schools at the time.

I used to be a session musician before I was a wrestler. I played bass guitar. I was big pals with Lars Ulrich and he asked me if I wanted to play bass with Metallica in their early days but it didn't work out.

I've been knocked out a few times, but I have no idea how many concussions I've ever had. 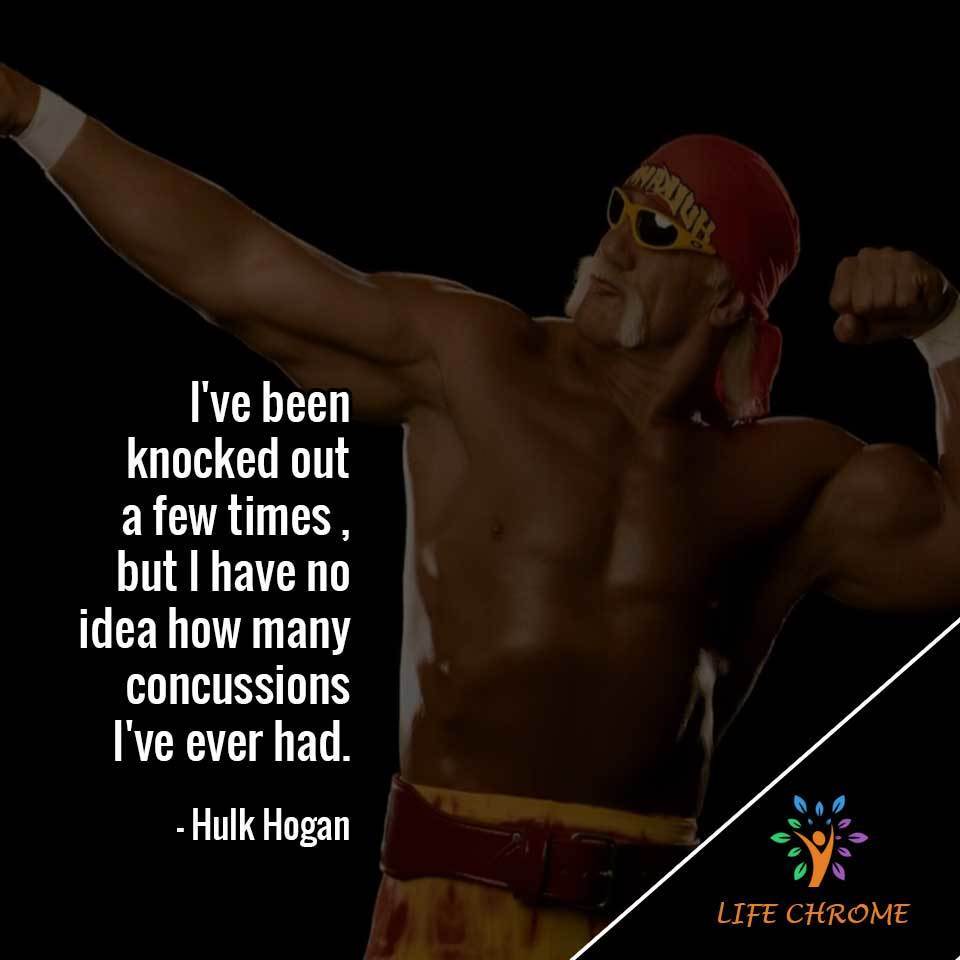 I totally understand OJ. I get it.

I'd like to be the John Wayne of the '90s. Not in terms of being the macho guy, but as a solid male leading character. Making an action-adventure comedy that kids can see with their families is a natural extension of what I did in wrestling.

You can have a wrestling idea, but you need to have these momentum-shifting moves. We had the Hulkamania movement, then it shifted to the beer-drinking, Stone Cold era, we reinvented the business with growing the black beard and becoming the bad guy, what's that next level.

The fans know what's happened to me over the past couple of years. I lost my family. I pretty much got devastated financially and the fans know that I've had some hard times - and that's the nature of loyal fans. They want to see the people that they love and believe in get back on their feet.

I've been talking to certain wrestlers on the phone lately, and certain female wrestlers that were huge stars ten years ago, and the first thing I ask them is 'do you still want to work?' Do they want to talk, or do they want to wrestle or do something else in the business?

People always expect Hulk Hogan to be standing up straight, or to have the bandanna on, or to not have my arms covered up. If I have an extra large shirt on people go 'oh yeah you look small.' It kind of ruins the mystique.

Whatcha gonna do, when Hulkamania runs wild on you!

Right before Pamela Anderson met Tommy Lee I got this crazy script to do this incredible movie with her where I play this cop with a young partner like Brad Pitt who is in love with Pamela Anderson and he gets killed in the line of duty and she falls in love with me and it gets really crazy. I turned that down.

It's amazing that even though I've lost everything else, I still have wrestling.

As far as my divorce goes, I love my family and I love my wife to death and I just don't know what tomorrow's going to bring.

There's a lot of gimmick infringement out there, but that's cool. It's a compliment. But it all started right when I first came into the Garden. I came down to 'Eye of the Tiger' and when I hit the ring with the Sheik, I just put my hand up to my ear by accident, and the crowd got louder. I was like 'Oh, that works.

Well let me tell you something, brother!

Here is an insightful interview with Hulk Hogan as he discusses his career, steroids, divorce, and son’s car crash.

Whatcha gunna do when Hulkamanina and my 24 pythons run wild on you? 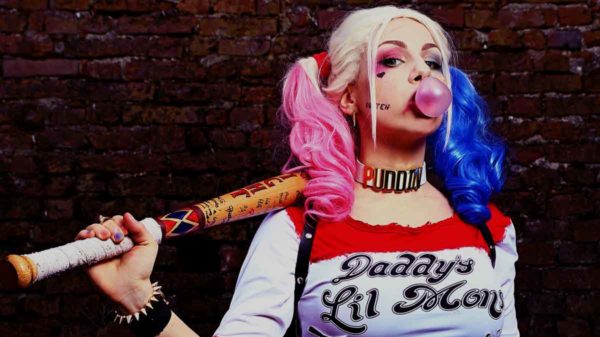