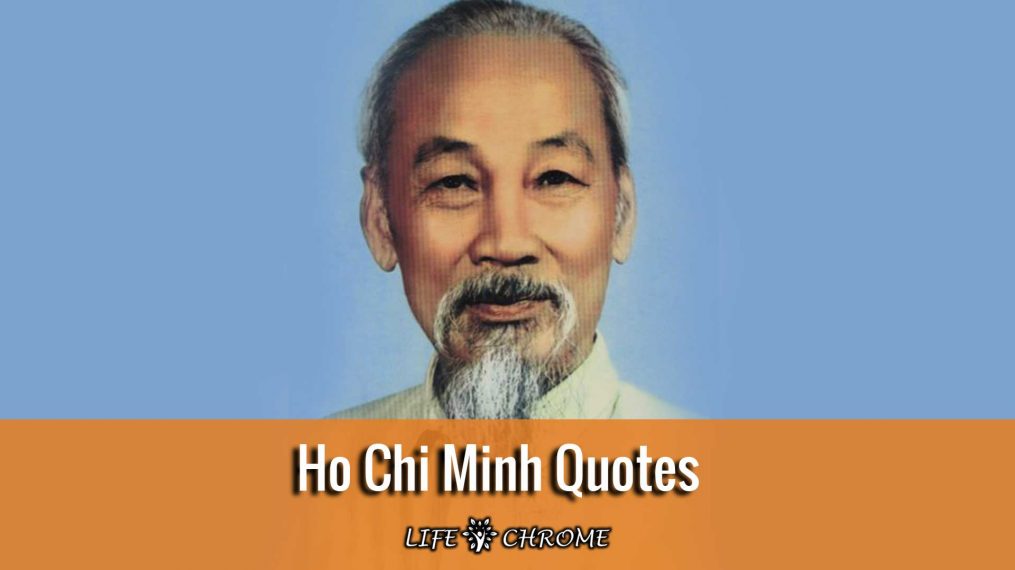 Write in such a way as that you can be readily understood by both the young and the old, by men as well as women, even by children.

The Vietnamese people deeply love independence, freedom and peace. But in the face of United States aggression they have risen up, united as one man.

​The object of my relationship with Vietnam has been to heal the wounds that exist, particularly among our veterans, and to move forward with a positive relationship,... Apparently some in the Vietnamese government don't want to do that and that's their decision.

Remember, the storm is a good opportunity for the pine and the cypress to show their strength and their stability. 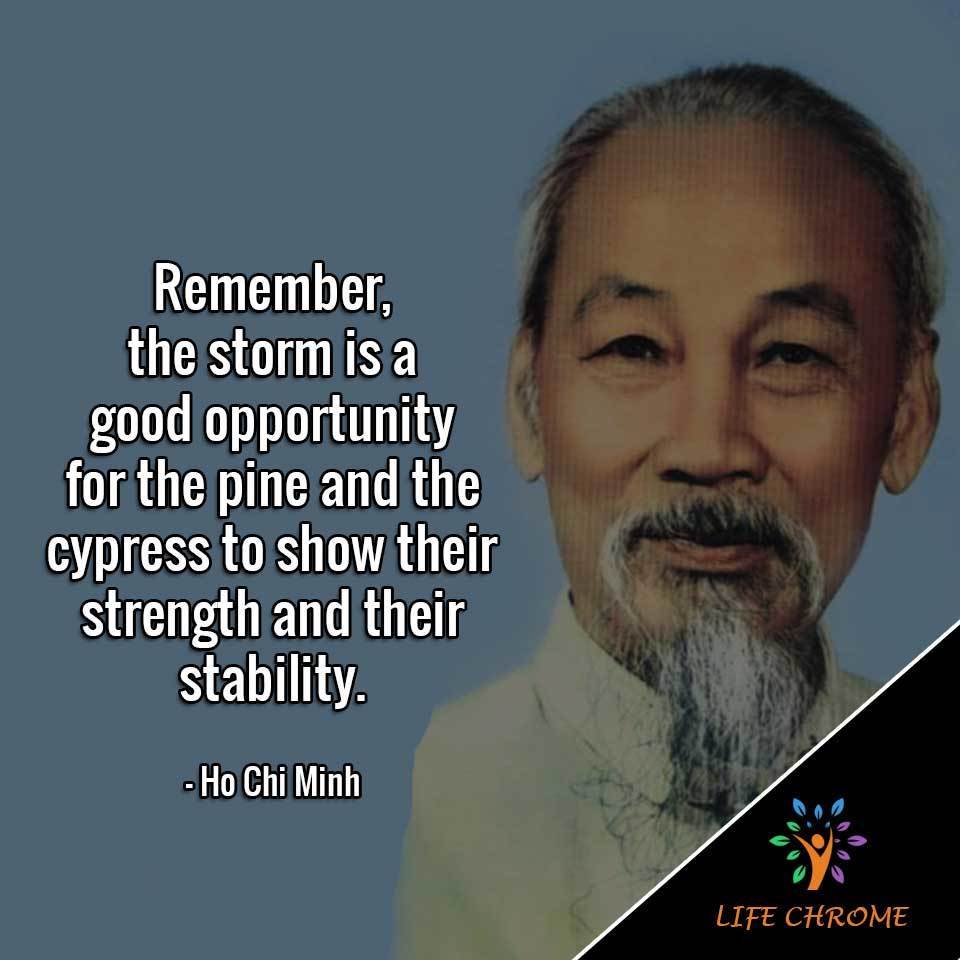 You will kill 10 of our men, and we will kill 1 of yours, and in the end it will be you who tire of it. But even at those odds, you will lose and we will win.

It was patriotism, not communism, that inspired me.

But by reading them again and again finally I was able to grasp the essential part. What emotion, enthusiasm, enlightenment and confidence they communicated to me! I wept for joy.

Nothing is more precious than independence and liberty.

When the prison doors are opened, the real dragon will fly out.

Love other human beings as you would love yourself. 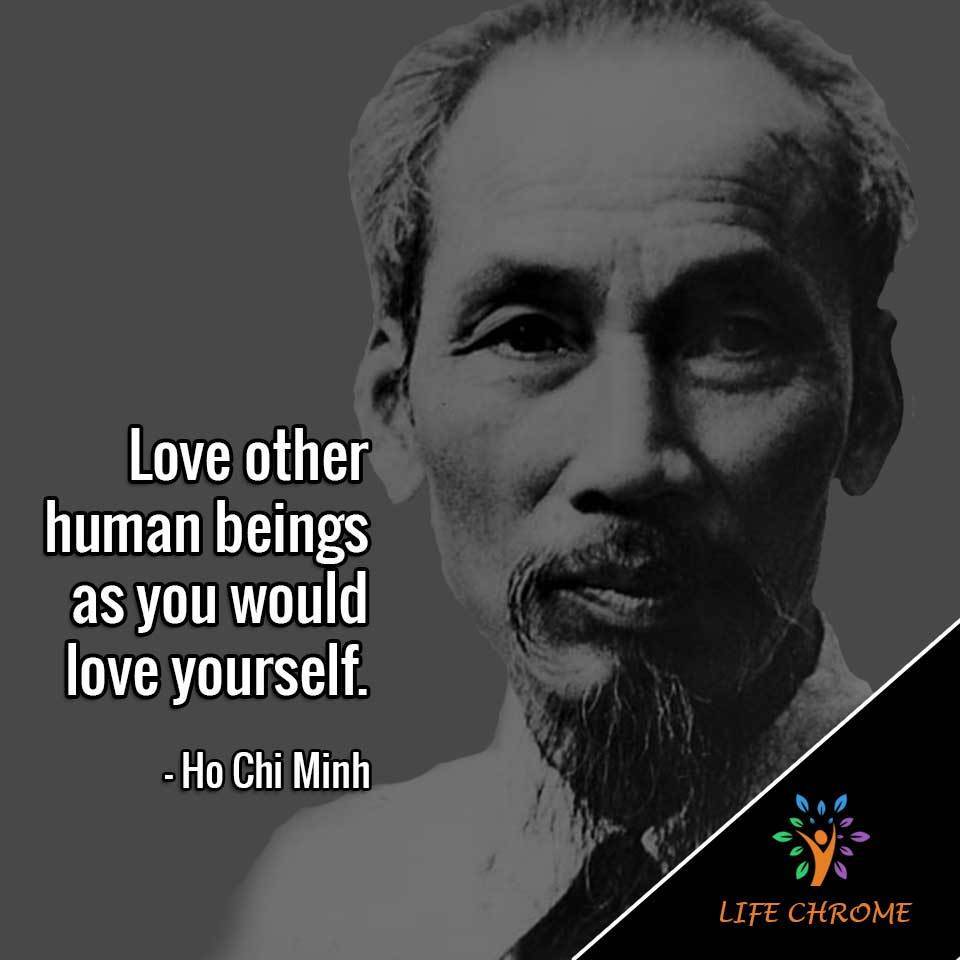 I'm very moved to be here today, ... Our lives are now much better, but Vietnam remains a very poor country. We need to work much harder.

The great victory of April 30 represents the triumph of the entire nation, of justice over brutality and of humanity over tyranny.

Every house was festooned with flowers and with lanterns. On the national day, the whole country went wild with joy, But on that very day, I was placed in chains and transferred: The wind remains contrary to the flight of the eagle.

Today we should make poems including iron and steel And the poet should know how to lead an attack.

Although our fight will be long and hard, our people are resolved to fight till final victory.

I and others may be revolutionaries but we are disciples of Mahatma Gandhi, directly or indirectly, nothing more nothing less.

The rice grain suffers under the blow of the pestle. But admire its whiteness once the order is over. So it is with men and the world we live in. To be a man one must suffer the blows of misfortune.

A poet must learn to wage war.

It is better to sacrifice everything than to live in slavery! 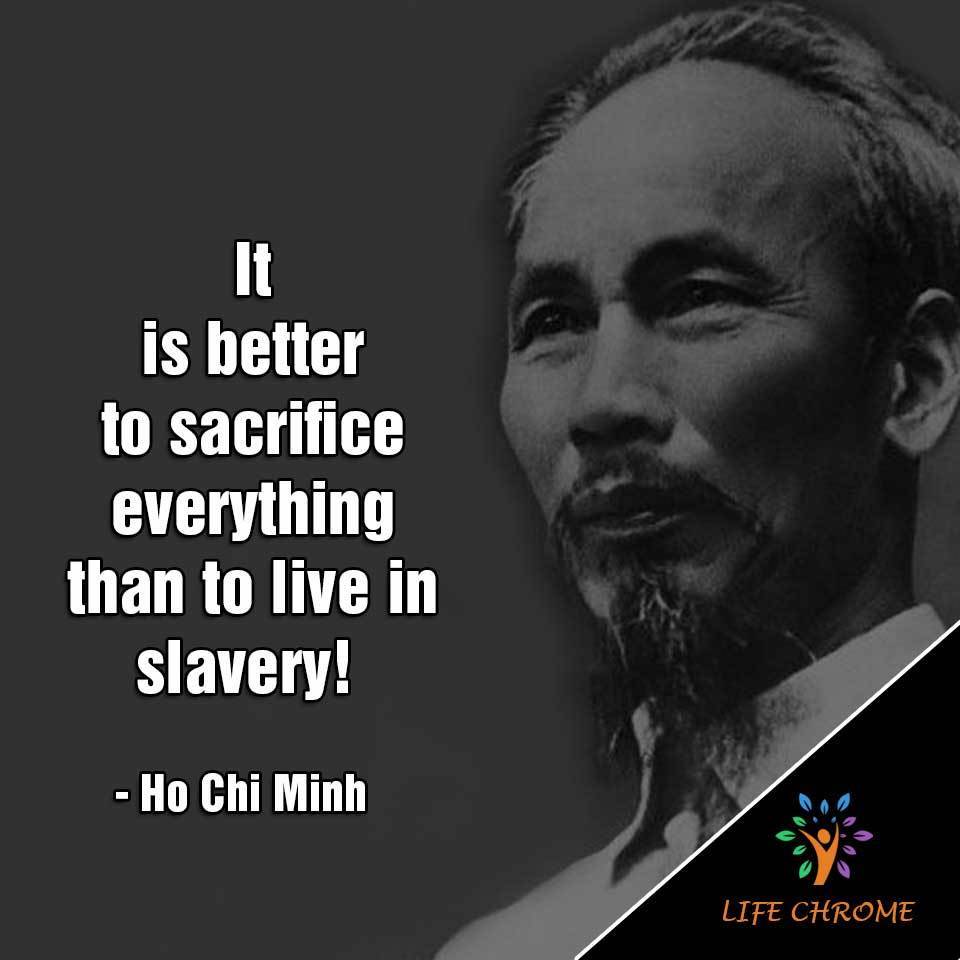 After the rain, good weather. In the wink of an eye, the universe throws off its muddy clothes.

Military action without politics is like a tree without a root.

Colonial atrocities have prepared the soil; it is for socialists to sow the seeds of revolution.

Among the collection of crimes of American "civilization," lynching has a special place of honor.

If you do not condemn colonialism, if you do not side with the colonial people, what kind of revolution are you waging?

When the power of love overcomes the love of power the world will know peace. 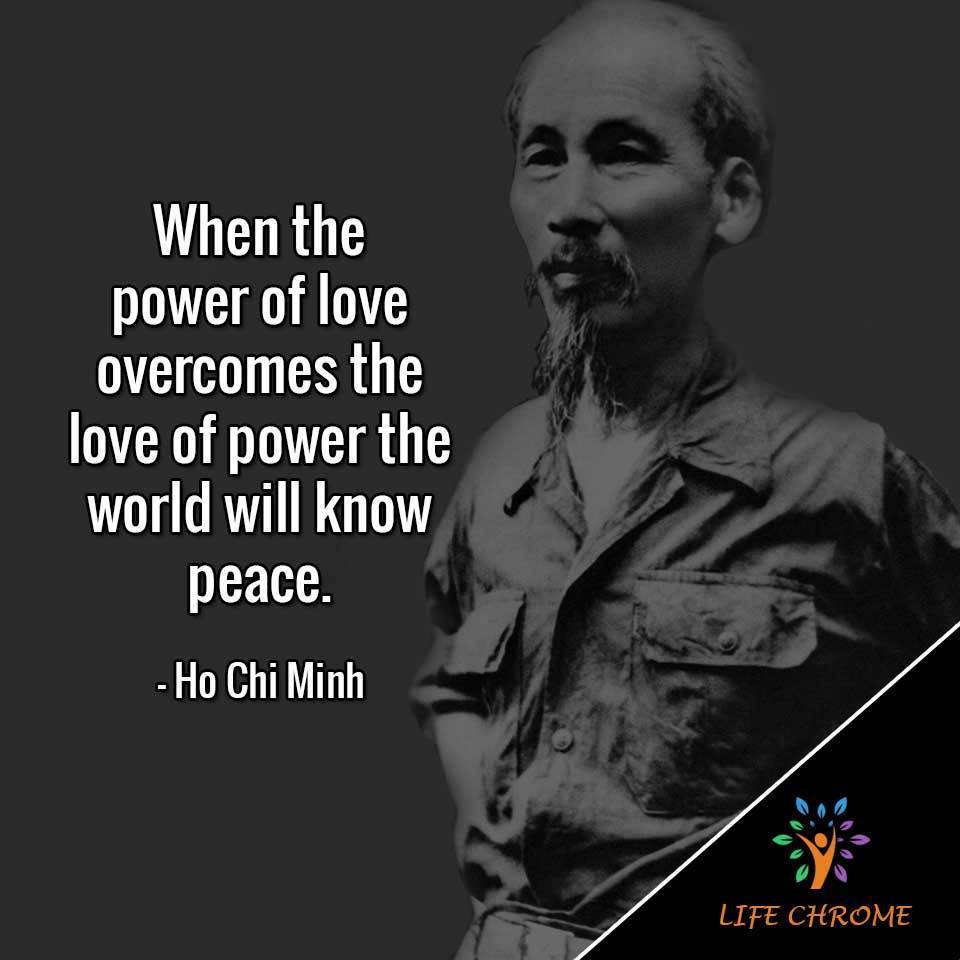 Imperialism has now reached a degree of almost scientific perfection. It uses White workers to conquer the non-white workers of The Colonies. Then, it hurls the non-white workers of one colony against those of another non-white colony. Finally, it relies on the Colored workers of the colonies to rule the White workers. Recently, White French soldiers near mutiny in the occupied Ruhr of Germany, were surrounded by French African soldiers, and colored native light-infantry were sent against White German strikers...

It is well known that the black race is the most oppressed and most exploited of the human family. It is well known that the spread of capitalism and the discovery of the New World had as an immediate result the rebirth of slavery which was, for centuries, a scourge for the Negroes and a bitter disgrace for mankind. What everyone does not perhaps know, is that after sixty-five years of so-called emancipation, American Negroes still endure atrocious moral and material sufferings, of which the most cruel and horrible is the custom of lynching.

Our resistance will be long and painful, but whatever the sacrifices, however long the struggle, we shall fight to the end, until Vietnam is fully independent and reunified.

If we have no peace, it is because we have forgotten that we belong to each other. 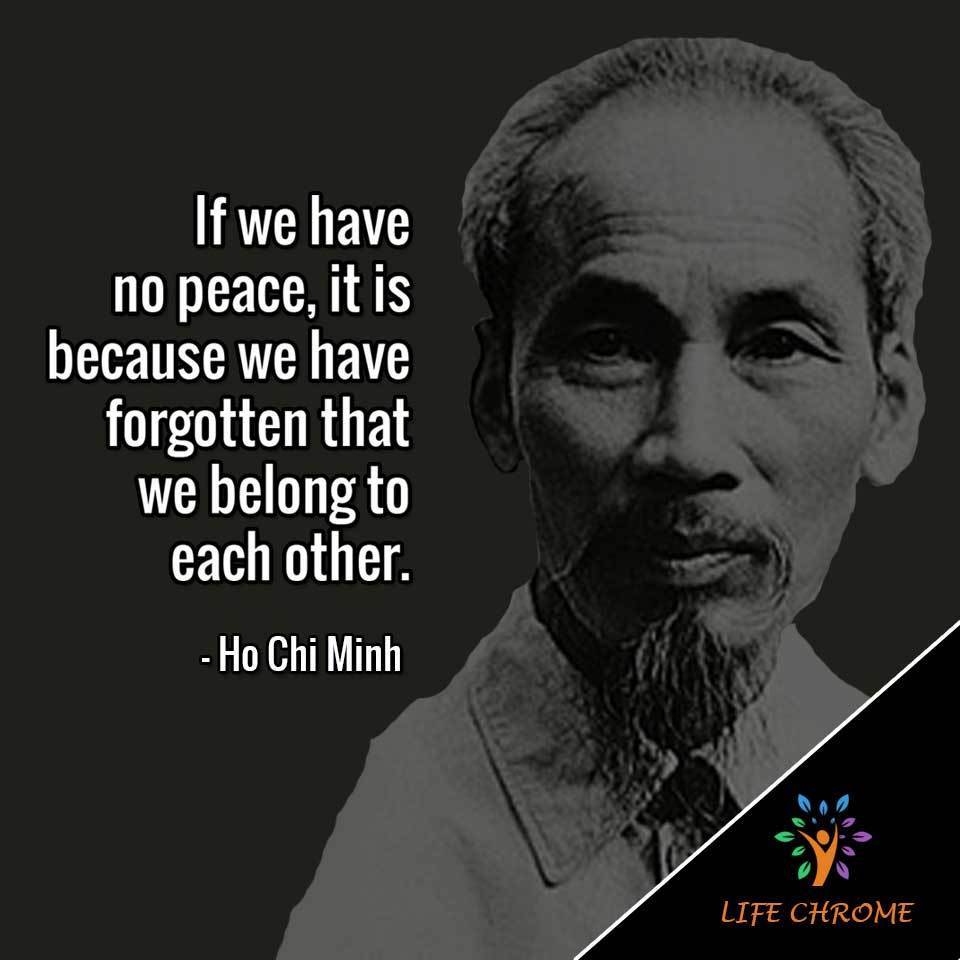 Mr. Schoenbrun, we have a secret weapon ... don't smile when I tell you this. Our secret weapon is nationalism. To have nationhood, which is a sign of maturity, is greater than any weapons in the world.

I've never heard of any president being so close to his people.

I refuse to accept the view that mankind is so tragically bound to the starless midnight of racism and war that the bright daybreak of peace and brotherhood can never become a reality... I believe that unarmed truth and unconditional love will have the final word.

Imagine all the people living life in peace. You may say I'm a dreamer, but I'm not the only one. I hope someday you'll join us, and the world will be as one.

An eye for an eye only ends up making the whole world blind.

you know if the french don't come in 15 minute we can leave it's the law.

More Amazing quotes From Others