You may be interested to know the best Harry Styles quotes but do you know who is Harry Styles? You can learn from Wikipedia.

That's the amazing thing about music: there's a song for every emotion. Can you imagine a world with no music? It would suck.

Despite the company outside, I believe in equal rights for everyone. I think God loves all.

I think you have to be cool to be a good flirt, and I don't think I'm very cool.

I've got a really good family; I've got great friends around me.

I don’t think I’ve found anything that feels as good as performing. It’d be fun to try and find it.

A dream is only a dream.. until you decide to make it real. 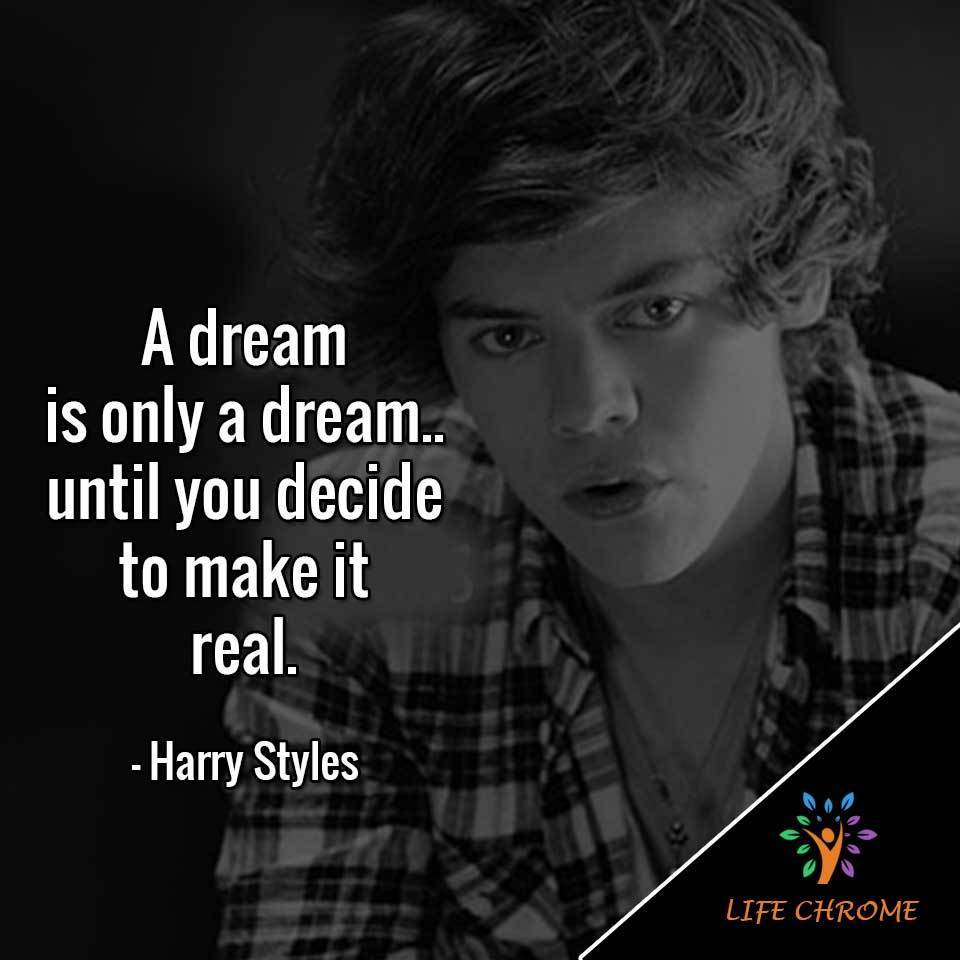 I’m still waiting for that passionate kiss in the rain.

Comfortable silence is so overrated.

Remember, everything will be alright, we can meet again somewhere.

Tonight was a big deal for us and what you’ve done tonight has meant so much to us. We love you.

I heard some stuff recently from Julian Casablancas, and his solo stuff is amazing. If I could write with anyone, it would be him.

I think, you know, we entered the 'The X Factor' in the U.K., and you kind of want someone who knows what they're talking about to tell you if you're any good or not instead of just your mum saying that you like it when you sing.

To win one Moonman is amazing, to win two is incredible.

Ages ago, my girlfriend had this little park near her house, with a bridge running over a stream... and I set up all these candles on the bridge. But when I called her and told her she said it was too dark and she wasn't coming out. 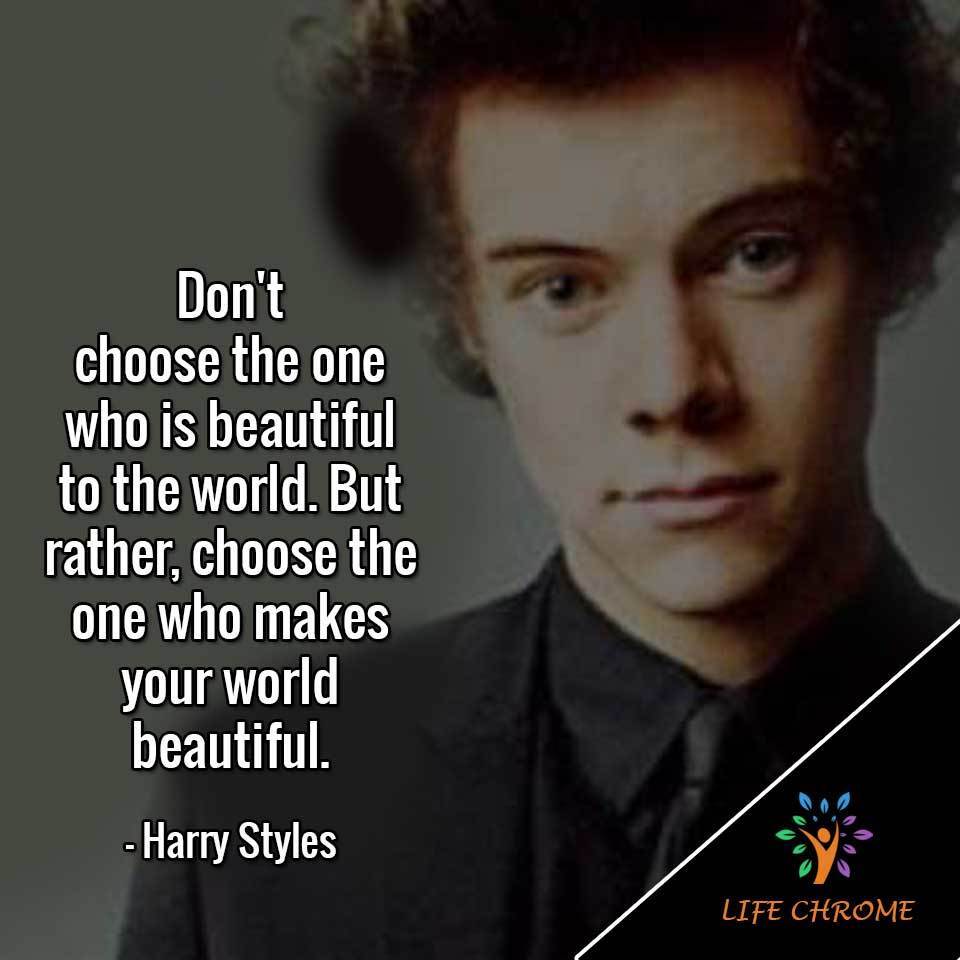 The fans just continue to be absolutely incredible. They just surprise us all the time with just how amazing that they are.

Tastes so sweet, looks so real, sounds like something that I used to feel.

We're just two ghosts swimming in a glass half empty.

I'm selfish, I know, I don't ever want to see you with him.

If I wasn't in the band I reckon I'd be a virgin.

I'm an 18-year-old boy, and I'm having fun. I'm just not having as much fun as people make out.

I think it’s not that hard, if you can take a step back from it and kinda see [fame] for what it is, then you don’t start believing that this is just life.

It’s hard when we argue but we’re both stubborn I know.

Apologies are never gonna fix this.

Same lips red, same eyes blue, same white shirt, couple more tattoos, but it's not you and it's not me.

If you’re going to get in trouble for hitting someone, might as well hit them hard. 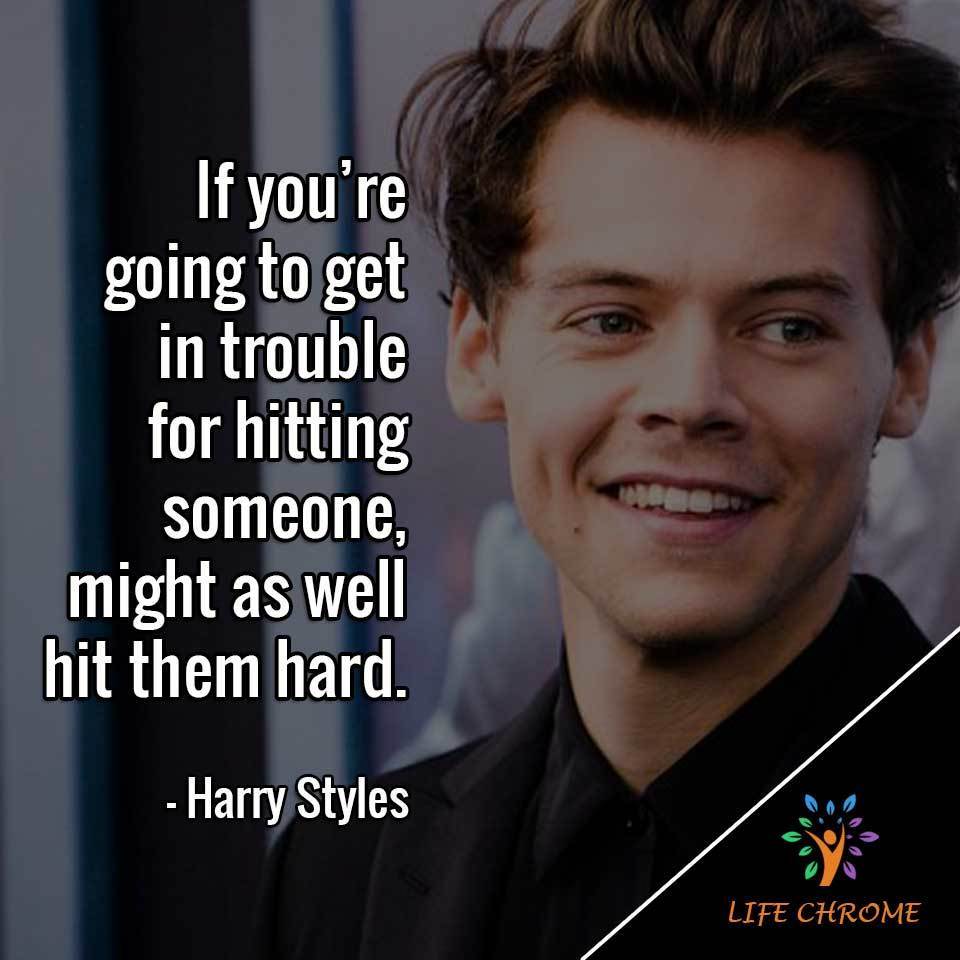 If everyone was a little bit nicer to people, the world would be a much better place. You have a choice where you can either be all right to someone or you can be a little bit nicer, and that can make someone’s day.

You're never going to get used to walking into a room and have people screaming at you. There's a lot of things that come with the life you could get lost in. But you have to let it be what it is. I've learnt not to take everything too seriously.

Never make eye contact with anyone while eating a banana.

I don't think you can define love.

Eating toast in the shower is the ultimate multitask

You can tell far too much about a person by which monopoly piece they play as.

I meditate and pray before going onstage - it helps me focus.

I wouldn't say I'm girl-crazy, because that makes me sound like a bit of a womanizer. That isn't really me. But I am quite flirty - maybe too flirty. I'm an 18-year-old boy, and I like to have fun!

Remember like where you’ve come from. Know, who you are? 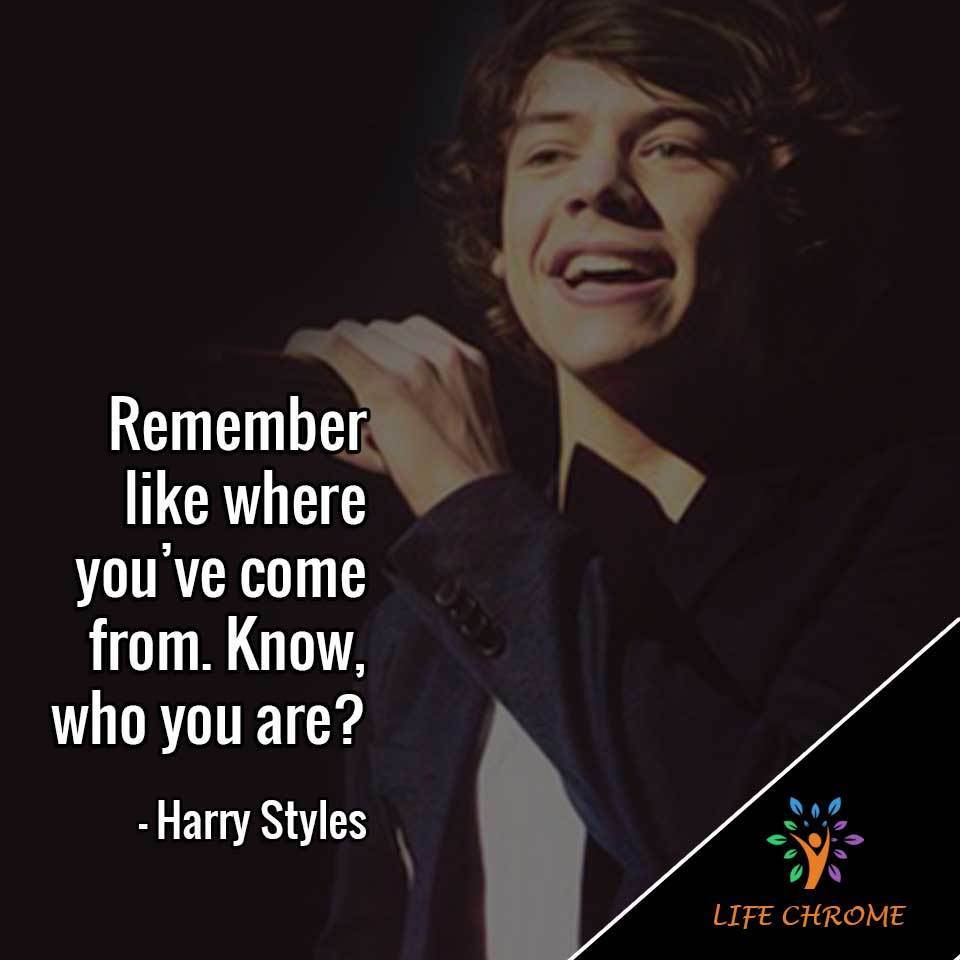 It only takes a second to call a girl fat and She'll take a lifetime trying to starve herself.. think before you act.

A short skirt and lots of makeup won't impress me.

I want you to do whatever makes you happiest in this world.

I went to watch Coldplay in Florida and saw Chris Martin before they went on. He sang ‘What Makes You Beautiful’ before the chorus of ‘Yellow’ kicked in. That was so strange because he’s an inspiration for me. I think he’s so good, he’s sick… he’s a really nice guy too.

Age is just a number, maturity is a choice.

Truth is, I don't mind getting a black eye or broken arm for a girl as long as she's there to kiss it after.

Any time that you can make someone who potentially might not feel as great about themselves as they should, feel better about themselves, I think that’s always a positive thing.

I think you shouldn’t be scared about embarrassing yourself… I think it builds character. 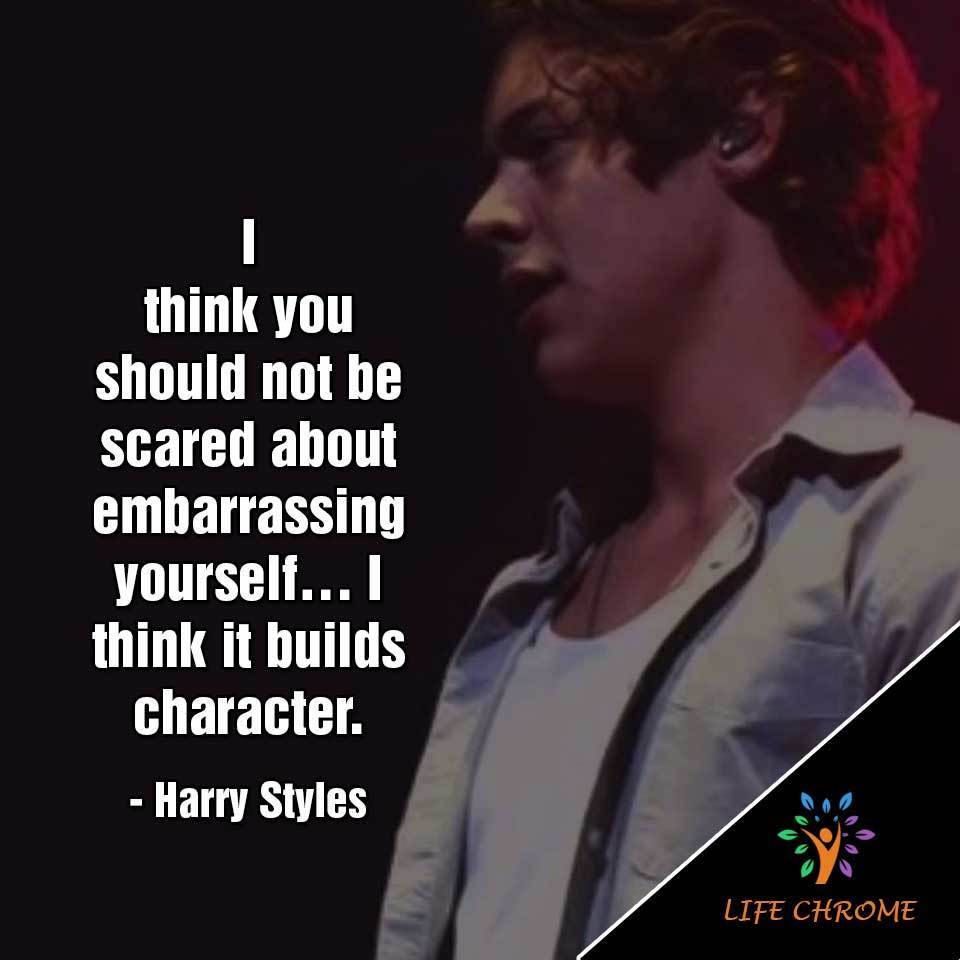 I can see how you could get dragged into the bad stuff, but I've got good friends around me, good family. I think I've got my head screwed on.

We have a choice...To Live or To Exist.

Introducing Tac-os! It's meat, cheese, and lettuce flavored O's in a tortilla bowl... it even makes the milk taste like tacos!

I can make your girlfriend scream louder than you ever could just by pressing her follow button.

I feel like I've woken up with suddenly more facial hair and a deeper voice.

I'm not really a pick-up-line guy. I don't know what I do.

I can take criticism, but if it's like 'I don't like you' then I want to know why people don't like me. Why do you hate me? What have I done?

A lot of the time, the way it's portrayed is that I only see women in a sexual way. But I grew up with just my mum and sister, so I respect women a lot.

I think you have to take me for me. I am who I am.

I don't want to be viewed as a womaniser or whatever. I don't like going crazy crazy, I like having fun but it's nice to wake up in your own bed, isn't it?

lease don’t forget us, we will always be here for you, you guys are the most incredible fans.

I think looking in, not everyone can understand it but to that girl or that boy, it might be the most important thing in the world. Just because you don’t understand it, doesn’t mean you can say it’s crazy.

I’d like to take care of someone but at the same time I like girls who are independent.

Quite a lot of the girls I get photographed with are just friends and then, according to the papers, I have, like, 7,000 girlfriends.

No. We don't really do that. We feel that objectifies women and that's not really what we're about.

I'm quite old-fashioned. I like going out to dinner. You have the chance to talk to somebody and get to know them better.

I find ambition really attractive too - if someone's good at something they love doing. I want someone who is driven.

A gentleman doesn't kiss and tell.

One time, a girl dropped her phone in my pocket and I found it and was like, 'There you go.' And she said, 'If you'd had my phone, you'd have had to meet up with me to give it back.

You get a lot of who you are as a musician across through the music you write. If you're writing your own music, then it's important to be really honest.

im am who i am i can't change!

I’ve got four nipples. I think I must have been a twin, but the one other went away and left its nipples behind.

If you believe in something, then you shouldn’t give up on it.

I do miss having someone to spoil, somebody that you can just sit with for a bit.

I want a girl who respects herself. It means her standards are high and if I fit them then id be honored. If she's easy then what does that say about me.

I think when you're writing songs, it's impossible to not draw on personal experiences, whether it be traveling or girls or anything. Just emotions.

Whatever it takes its fine.

Will somebody hold me?

I hate the word famous because it has no substance.