Before start reading all Harry Potter Quotes, You can learn more about Harry Potter from Wikipedia if you don't know too much about this legend.

Time will not slow down when something unpleasant lies ahead.

Mr. and Mrs. Dursley of number four, Privet Drive, were proud to say that they were perfectly normal, thank you very much.

I hope you're pleased with yourselves. We could all have been killed — or worse, expelled. Now if you don't mind, I'm going to bed.

To the well-organized mind, death is but the next great adventure.

You're a little scary sometimes, you know that? Brilliant ... but scary.

It is our choices, Harry, that show what we truly are, far more than our abilities.

Things we lose have a way of coming back to us in the end, if not always in the way we expect. 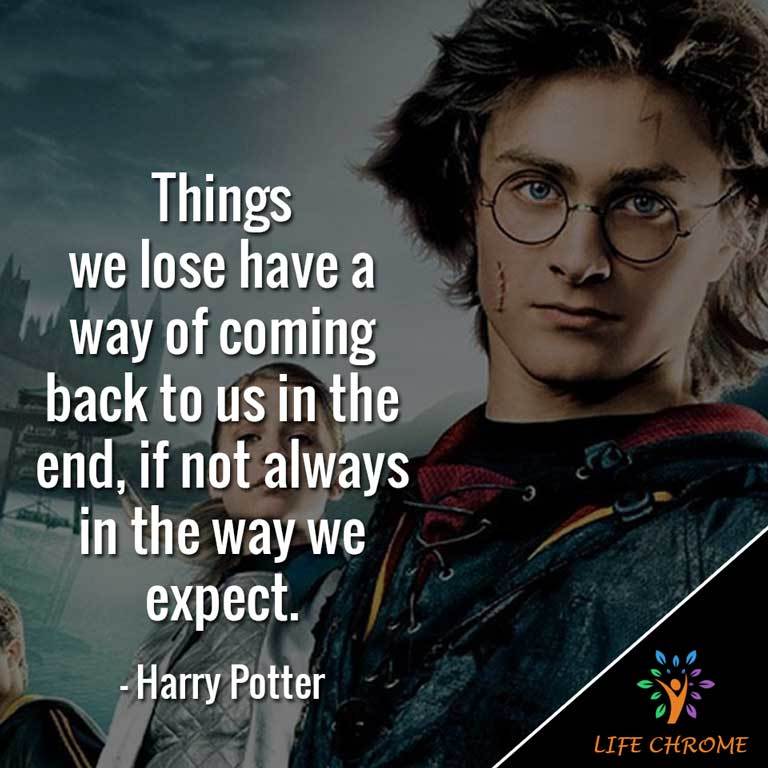 I solemnly swear I am up to no good.

Honestly, am I the only person who's ever bother to read Hogwarts: A History?

But you know, happiness can be found even in the darkest of times, if one only remembers to turn on the light.

If you want to know what a man’s like, take a good look at how he treats his inferiors, not his equals.

I am what I am, an' I'm not ashamed. 'Never be ashamed,' my ol' dad used ter say, 'there's some who'll hold it against you, but they're not worth botherin' with.

It matters not what someone is born, but what they grow to be.

Give her hell from us, Peeves.' And Peeves, whom Harry had never seen take an order from a student before, swept his belled hat from his head and sprang to a salute as Fred and George wheeled about to tumultuous applause from the students below and sped out of the open front doors into the glorious sunset.

Harry witnessed Professor McGonagall walking right past Peeves who was determinedly loosening a crystal chandelier and could have sworn he heard her tell the poltergeist out of the corner of her mouth, 'It unscrews the other way.

I think I'll just go down and have some pudding and wait for it all to turn up — it always does in the end.

You can laugh, but people used to believe there were no such things as the Blibbering Humdinger or the Crumple-Horned Snorkack!

I mean, it's sort of exciting, isn't it, breaking the rules?

We’ve all got both light and dark inside us. What matters is the part we choose to act on. That’s who we really are.

The thing about growing up with Fred and George,' said Ginny thoughtfully, 'is that you sort of start thinking anything's possible if you've got enough nerve.

And now, Harry, let us step out into the night and pursue that flighty temptress, adventure.

Every human life is worth the same, and worth saving.

He must have known I'd run out on you.’ ‘No,’ Harry corrected him. ‘He must've always known you'd always want to come back.

After all this time?' 'Always,' said Snape.

Words are, in my not-so-humble opinion, our most inexhaustible source of magic. Capable of both inflicting injury, and remedying it.

It does not do well to dwell on dreams and forget to live. 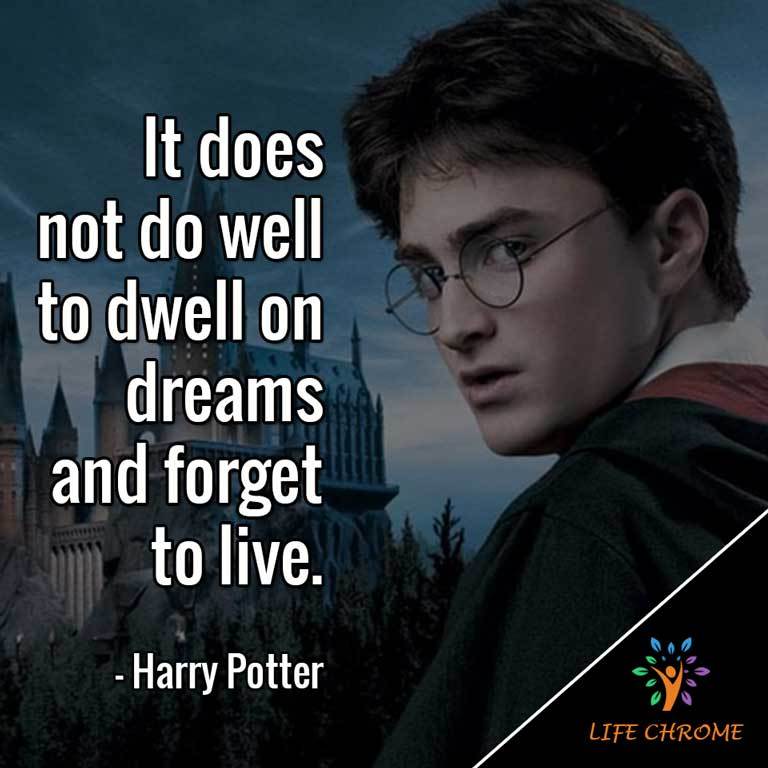 Not my daughter, you b*tch!

And Percy was shaking his brother, and Ron was kneeling beside them, and Fred's eyes stared without seeing, the ghost of his last laugh still etched upon his face.

It is a curious thing, Harry, but perhaps those who are best suited to power are those who have never sought it. Those who, like you, have leadership thrust upon them, and take up the mantle because they must, and find to their own surprise.

No, Harry, you listen,' said Hermione. 'We're coming with you. That was decided months ago — years, really.

Words are in my not-so-humble opinion, the most inexhaustible form of magic we have, capable both of inflicting injury and remedying it.

Why are they all staring?’ demanded Albus as he and Rose craned around to look at the other students. ‘Don’t let it worry you,’ said Ron. ‘It’s me. I’m extremely famous.

I've always wanted to use that spell.

Just because you have the emotional range of a teaspoon doesn't mean we all have. 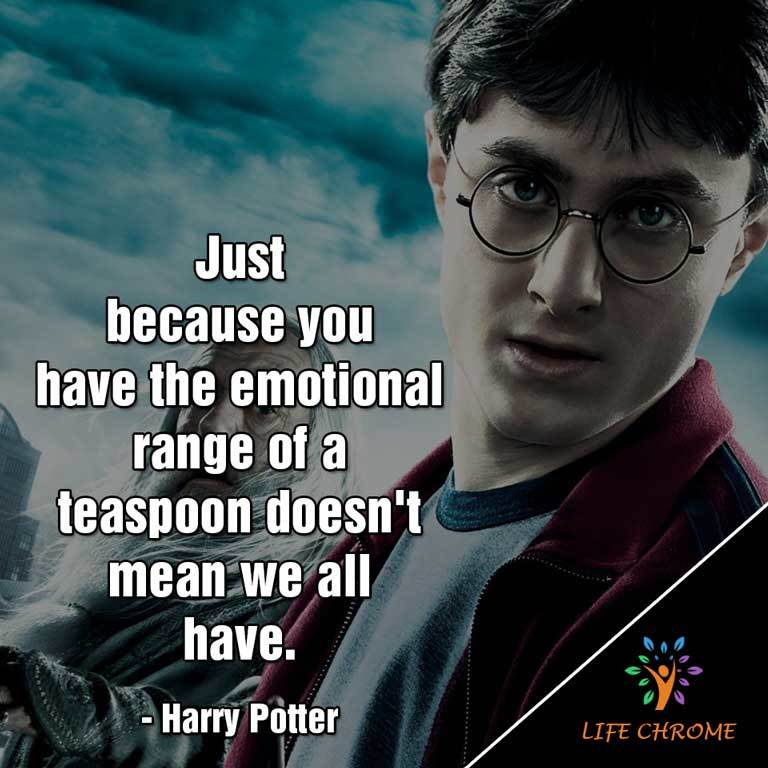 Of course it is happening inside your head, Harry, but why on earth should that mean that it is not real?

One can never have enough socks.

You fail to recognize that it matters not what someone is born, but what they grow to be!

Have you any idea how much tyrants fear the people they oppress? All of them realize that, one day, amongst their many victims, there is sure to be one that rises against them and strikes back!

Differences of habit and language are nothing at all if our aims are identical and our hearts are open.

The truth.” Dumbledore sighed. “It is a beautiful and terrible thing, and should therefore be treated with great caution.

After all, to the well-organised mind, death is but the next great adventure.

Numbing the pain for a while will make it worse when you finally feel it.

Indifference and neglect often do much more damage than outright dislike.

Dumbledore says people find it far easier to forgive others for being wrong than being right.

It is the unknown we fear when we look upon death and darkness, nothing more.

Never trust anything that can think for itself if you can’t see where it keeps its brain. 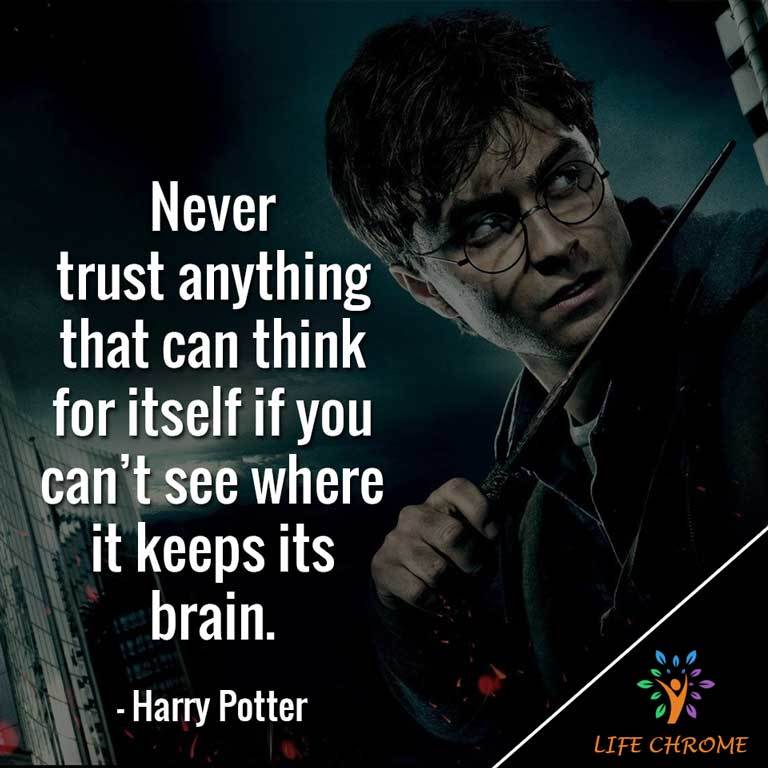 Ah, music," he said, wiping his eyes. "A magic beyond all we do here!

I am not worried, Harry," said Dumbledore, his voice a little stronger despite the freezing water. "I am with you.

Really Hagrid, if you are holding out for universal popularity, I'm afraid you will be in this cabin for a very long time.

There are some things you can't share without ending up liking each other, and knocking out a twelve-foot mountain troll is one of them.

The mind is not a book, to be opened at will and examined at leisure.

I'm not going to be murdered,' Harry said out loud. 'That's the spirit, dear,' said his mirror sleepily.

Don’t let the muggles get you down.

Books and cleverness! There are more important things – friendship and bravery.

Perhaps those who are best suited to power are those who have never sought it. Those who, like you, have leadership thrust upon them and take up the mantle because they must, and find to their own surprise that they wear it well.

Fear of a name only increases fear of the thing itself. 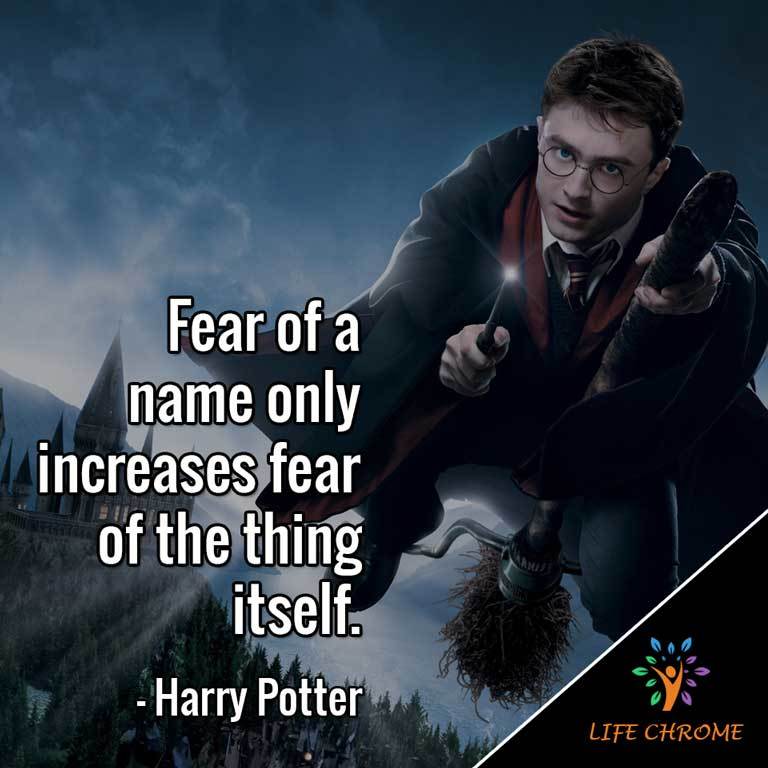 Our biggest adversities will reveal your true self.

Do not pity the dead, Harry. Pity the living, and above all, those who live without love.” Albus Dumbledore 21. “We are only as strong as we are united, as weak as we are divided.

Thoughts could leave deeper scars than almost anything else.

Books! And Cleverness! There are more important things.

No good sittin' worryin' abou' it. What's comin' will come, an' we'll meet it when it does.

We must all face the choice between what is right and what os easy.

It's a strange thing, but when you are dreading something, and would give anything to slow down time, it has a disobliging habit of speeding up.