Here are Harley Quinn quotes for you. Are you interested to know?

Harley Quinn is an American comic character who was first introduced in the Joker with the main supervillain and anti-heroic protagonist which was published by DC Comics. The character, Harley Quinn is the creation of Paul Dini and Bruce Timm, appearing as a comic relief witty woman and dynamic persona with her uniqueness.

For the first time, she appeared in the Joker’s Favor and debuted in episodes becoming the main character’s sidekick and love seeker who was adapted into DC Comics’ Batman comic book canon seven year later. She appeared in the series as a psychiatrist named Dr. Harleen Quinzel who falls in love with Joker by the time.

One by one she came in the other episodes as a lover of Joker and best friend of Ivy, later to be free from the codependent and an abusive relationship with him many series published like the Gotham City Sirens as a leading role there.

Harley Quinn has super qualities which includes expert gymnastic skills, also skilled in weapons , hand to hand combat, complete unpredictability, immunity to toxins and many others. She brought about fame in such cinematic debut, in the DC Extended Universe film Suicide Squad, as a reprised role.

All of that chit-chat is gonna get you hurt.

Wait till they get a load of me.

It soon became clear to me the Joker, so often described as a raving, homicidal madman … was actually a tortured soul crying out for love and acceptance. A lost, injured child trying to make the world laugh at his antics.

My love for my Joker was stronger than their mad house walls. 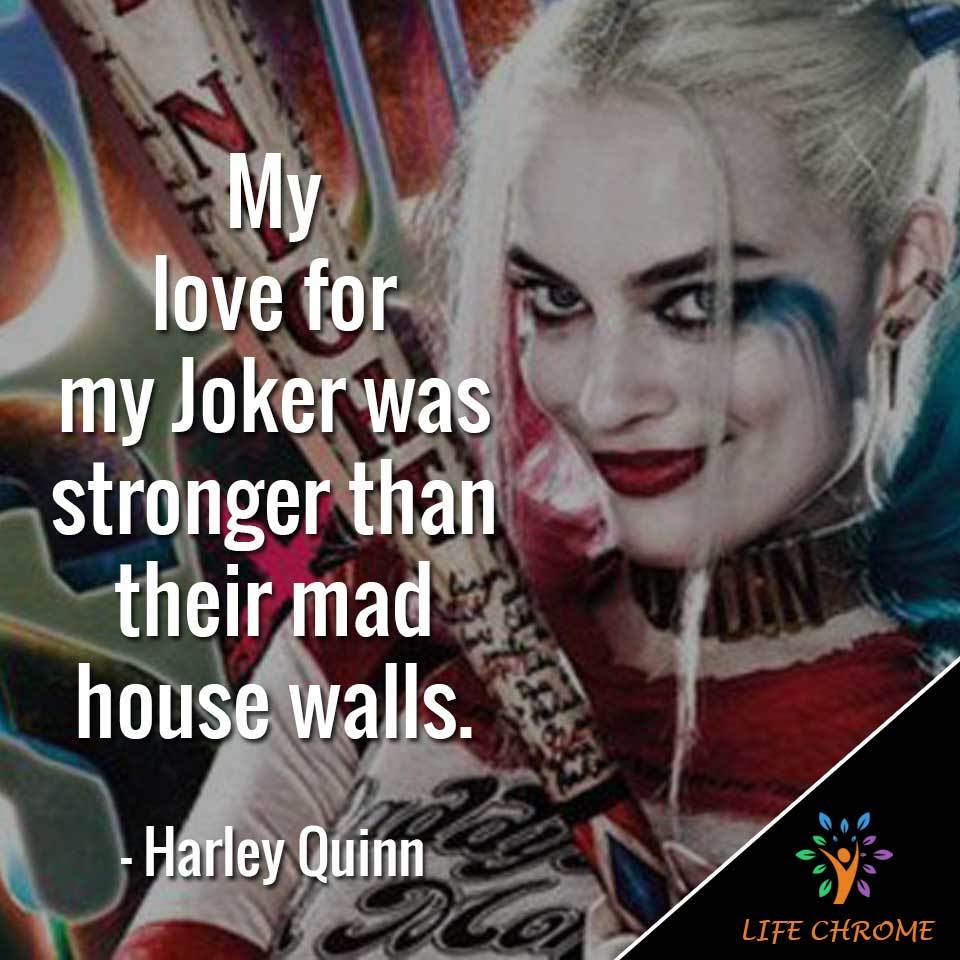 You know, for what it’s worth, I actually enjoyed some of our romps, but there comes a time when a gal wants more. And now, all this gal wants is to settle down with her lovin’ sweetheart.

Face it, Harl, this stinks! You’re a certified nutso wanted in twelve states and hopelessly in love with a psychopathic clown.

Never again. No more obsession, no more craziness, no more Joker. I finally see that slime for what he is: a murderous, manipulative, irredeemable…

I found the Joker’s psyche disturbing, his dementia alarming — and his charm irresistible! What can I tell ya? The guy just did it for me.

You can’t deny there’s an element of glamour to these super criminals.

Every woman has a crazy side that only the right man can bring out.

And here you thought I was just another bubble headed, blonde, bimbo. Ha! Well jokes on you! I’m not even a real blonde.

I’m not sure if I attract crazy or if I make them that way.

You really put the ‘fun’ in funeral.

It soon became clear to me the Joker was actually a tortured soul. Yes, I admit it. As unprofessional as it sounds, I had fallen in love with my patient. Pretty crazy huh?

I’m rubber, you’re glue, whatever you say bounces off me and makes a six-inch-diameter exit wound in you.

I’ve made so many mistakes and there’s no one left who believes in me.

So, I’m thinking if we move together, we can kill all these guys and go our separate ways. Spread the word.

If I’m mad enough to skip the tears and go straight to laughing, you better run cause I’m about to lose my shit.

I’m known to be quite vexing I’m just forewarning you.

They’ve got Hello Kitty on them. They’re fashionable.

If I get mad at you that means I still care. Worry when I don’t get mad.

Don’t get me wrong, my puddin’s a little rough, but he loves me, really. 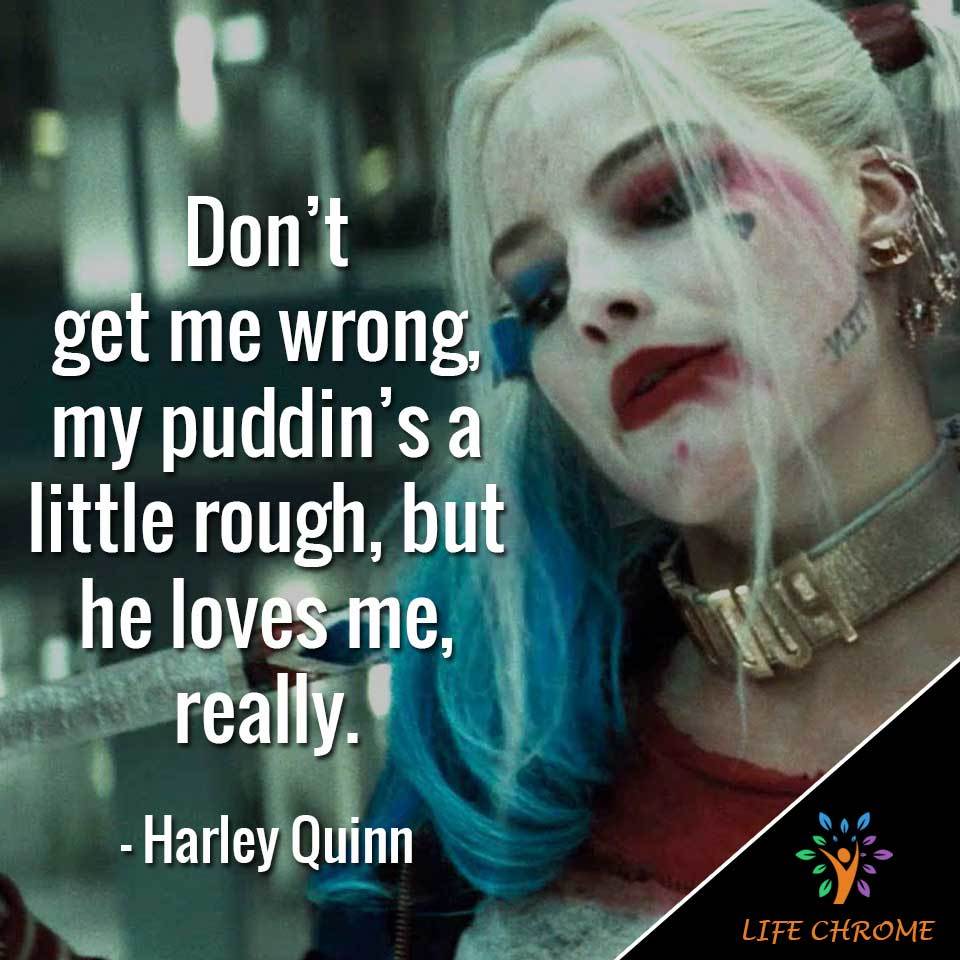 Hah! You’re just jealous ’cause you don’t have a fella who’s as loving and loyal toy you as my Puddin’ is to me!

That so cute, you think you’re scary. Well, mister, I’ve seen scary and you don’t have his smile.

Find what you love and let it kill you…

Everyone can see all this trippy magic stuff, right? I’m off my meds.

My heart scares you; but a gun doesn’t?

We can’t change the past, but there’s a difference between moving on and letting go.

I’ll burn the world just to see the fire in your eyes!

I know how to make some smiles pudding.

Why can’t a girl be nice to a guy without the mook trying to murder her? 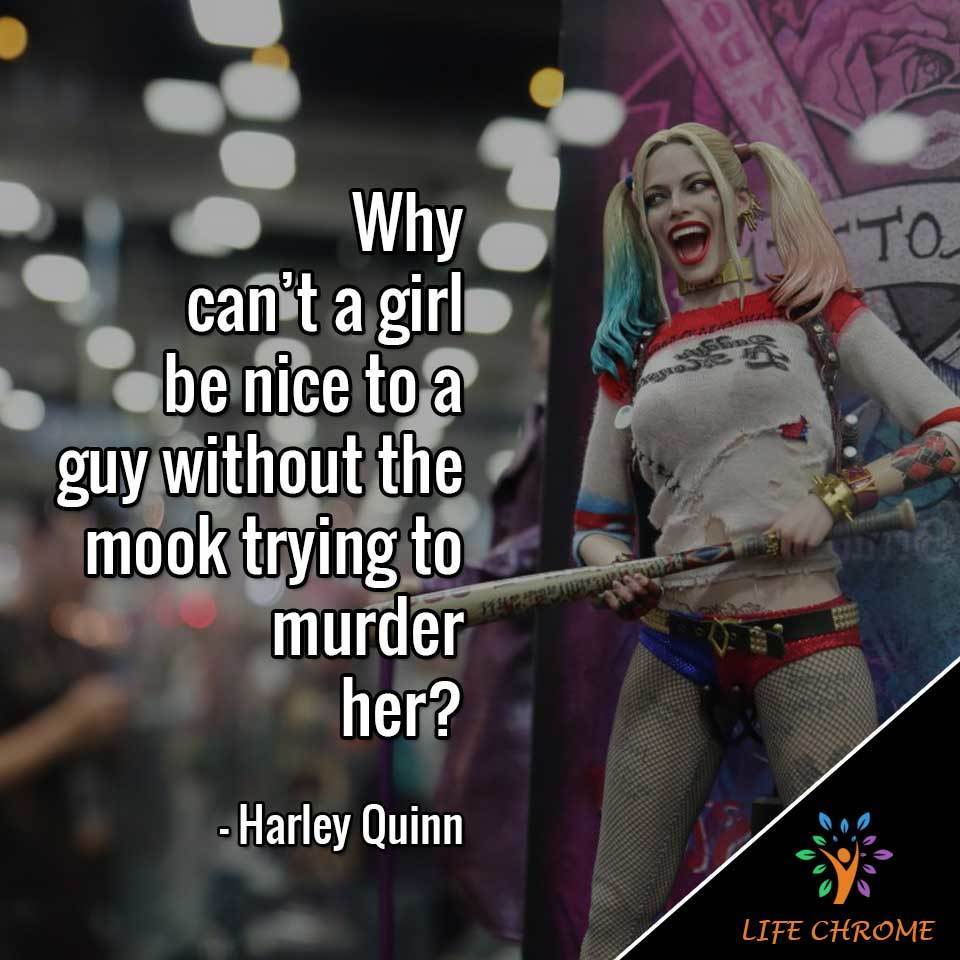 What was that? I should kill everyone and escape? Sorry, it’s the voices. Ahaha, I’m kidding! That’s not what they really said.

No matter how insane you maybe, there is always someone to complete the insanity.

People love to pretend fantasy and reality are separate, distinct, unrelated. Nothing could be further from the truth. They’re entwined.

I know the voices in my head aren’t real, but sometimes their ideas are absolutely awesome.

Nice to meet you. Love your perfume. What is that? The stench of death?

What, you were just… Thinking you can have a happy family and coach little leagues, and make car payments? Normal’s a setting on the dryer. People like us, we don’t get normal!

After all this time–all these years–you and I have history. I know what you think of me. You think I’m just a doll. A doll that’s pink and light. A doll you can arrange any way you like. You’re wrong. Very wrong. What you think of me is only a ghost of time. I am dangerous. And I will show you just how dark I can be.

Have you heard this new Taylor Swift song? It's soooo good.

You didn't like my show? Well, try this one. It's called 'Animals Attack People I Hate.' It's a comedy.

Whatever doesn’t kill you simply makes you stranger.

Sometimes the only way to stay sane is to go a little crazy. 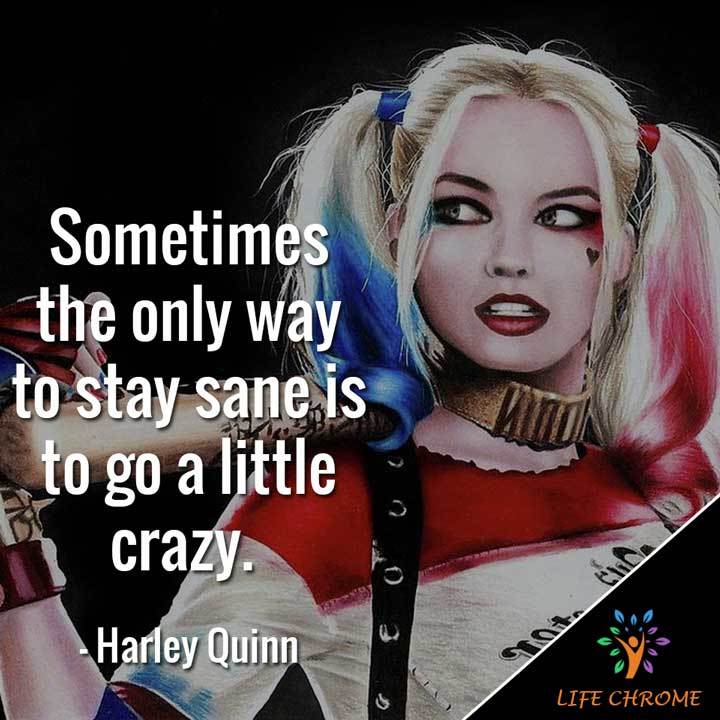 Never be ashamed of a scar. It simply means you’re stronger than whatever tried to hurt you.

I have a method to my madness. Only I can understand.

Because everything she does comes from within; from some dark impulse. I guess that’s what makes her so thrilling to watch. So dangerous. Even perfect at times, but also so damn destructive.

So what if I’m crazy? the best people are.

You’re my friend, too.

Look…I’m only doing this to help you. Let’s try this again. Acceptance.

I tried to play by the rules, but no! They wouldn’t let me go straight! Society is to blame! 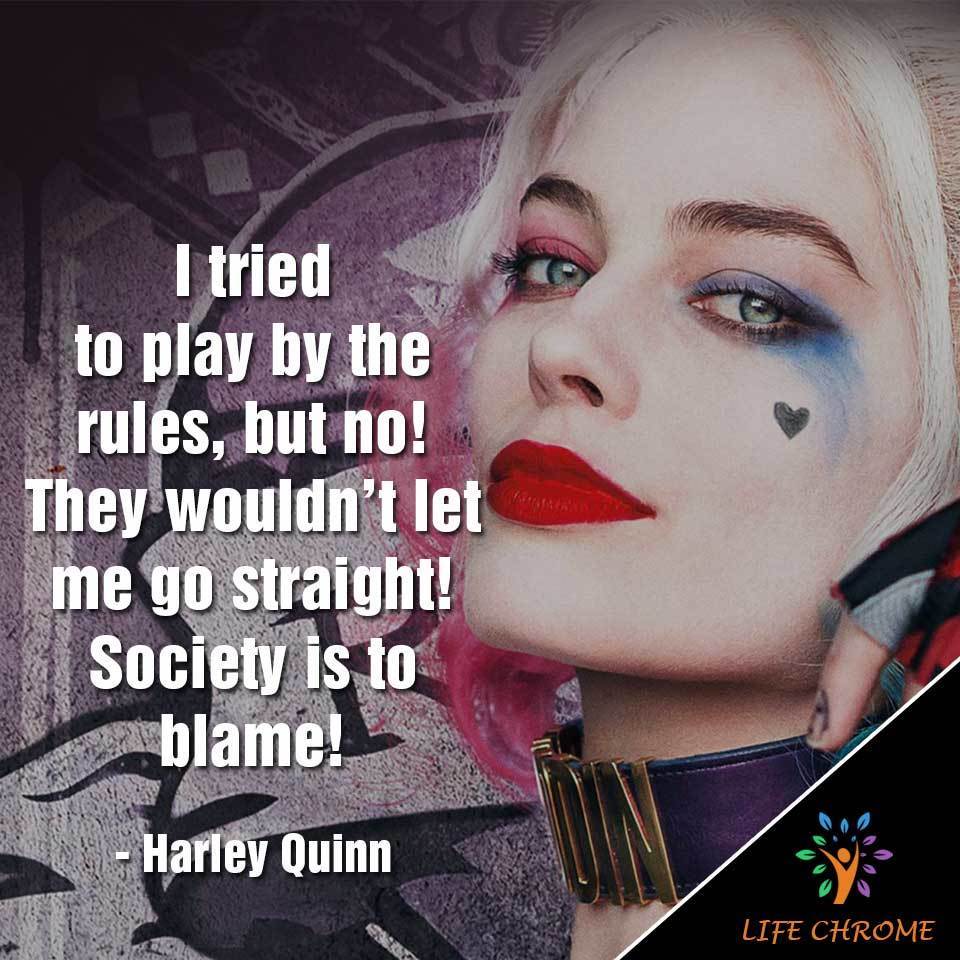 In case ya ain’t figured it out, today’s the Joker’s big homecoming, and you’re the guest of honor.

I’m having a BAD DAY! I’m sick of people trying to shoot me, run me over or blow me up! All I wanted was a new dress – and I actually paid for it!

We had mad love, once upon a time. But now that’s over, Mistah J.

We’re finished, you and me. I’ve got someone new now. Someone better.

You got the look. And a lotta nerve. What you don’t have is the right. Joker was a hero. You’re not fit to lick his boutonniere!

What’s wrong with you, B-man? You come into Mista J’s home and just start smashing it to pieces! Don’t you know he’s sick?

I promised you some entertainment, right, boys?

Ladies and jerks! There’s been a slight change in tonight’s show. Insteada the opera robbin’ you for somethin’ like a thousand bucks a seat — we’re gonna rob you! Believe me folks, I’ve seen it already. I’m doin’ ya a big favor!

Let me get you outta here girl. We can team up again. Drive all the boys crazy. Ya know? Like the old days.

Nice work, butterfingers, why didn’t cha just turn the bat signal on while you were at it!

You got it all wrong, baby. I was using them to help you escape. Who else would I break into Arkham for? Nobody, that’s who. It’ll be just like old times.

My boss likes me to wear a smile to work.

You don’t like me? Fine. Don’t waste my time then.

Look on the bright side – tomorrow you’ll be feeding hundreds of hungry cats!

Whatever you say, Mistah J! Just gimme a sec to find the form and I’ll commit myself!

So you do remember me. That´s weird, because you killed the only thing I ever loved, and now I find you have been keeping a whole new generation of Jokers to yourself. I know. Awkward.

When I was around, she couldn’t even find her face in the mirror. It’s as if something was holding her back.

I have done everything you said. Every test, every trial, every initiation. I have proved I love you. Just accept it!

Own that sh*t. Own it! What do you think was gonna happen? Huh?

Oh, come on, Puddin! Don’t you wanna rev up your ‘Harley’? Vroom vroom.

I sleep where I want, when I want, with who I want.

I’m bored. Play with me.

Oh the irony! The grim stalwart Dark Knight and his greatest female adversary, fightin together to save the city!

I think you should do what he says. It would be a shame to get blood all over my nice new outfit. What do you think, Bat-brain? Like it? What am I saying, ‘course you do. Who wouldn’t?

I know how the world works, okay? And when it comes to the heart, everyone for themselves, right?

Oh, I get it. ‘Cause, like, this is a sewer, too, only with nice shops and restaurants, right? You hate mankind much? Let me guess. Mommy didn’t take you to Chuck E. Cheese on your sixth birthday. I can recommend a good therapist.

Welcome to Blackgate. We’re just going to do a quick psychiatric evaluation. Bad day, huh? Cops in this city – always beating on the sick and defenseless.

A little bird told me some creep was dressed up like the Joker, fighting a Batman wannabe.

Hey captain don’t let the heroes get you, it’ll be bad for us, oh and your health.