“Without continual growth and progress, such words as improvement, achievement, and success have no meaning.” – Benjamin Franklin

“I am not afraid of storms, for I am learning to sail my ship.” – Little Women

“Great works are performed, not by strength, but by perseverance.” – Samuel Johnson

“Be so busy improving yourself that you have no time to criticize others.” – Chetan Bhagat

“The greatest mistake you can make in life is to be continually fearing you will make a mistake.” – Elbert Hubbard

“You may have to fight a battle more than once to win it.” – Margaret Thatcher

“Dreams don’t work unless you do.” – John C. Maxwell

“Would you like me to give you a formula for success? It’s quite simple, really. Double your rate of failure.” – Thomas Watson

“I hated every minute of training, but I said, ‘Don’t quit. Suffer now and live the rest of your life as a champion.” – Muhammad Ali

“Failure is so important. We speak about success all the time but it is the ability to resist or use failure that often leads to greater success.” – J. K. Rowling 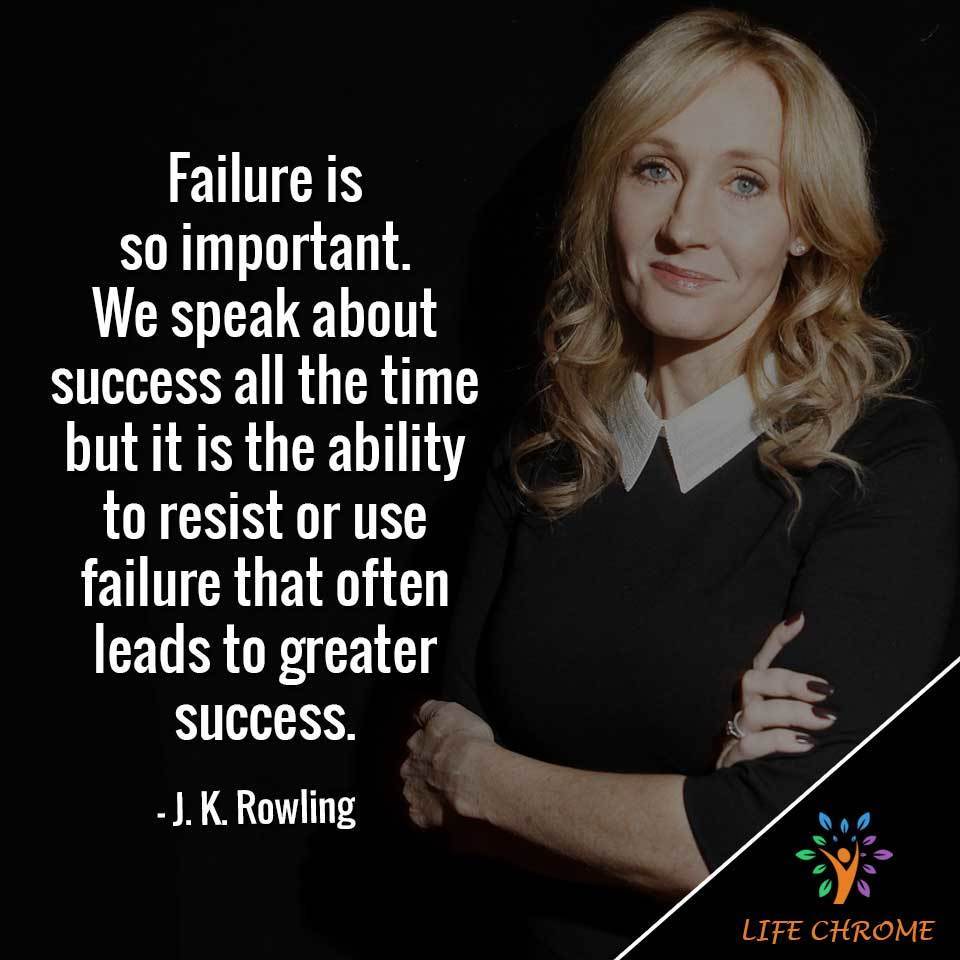 “It is hard to fail, but it is worse never to have tried to succeed.” - Theodore Roosevelt

“I am always doing what I cannot do yet. In order to learn how to do it.” – Vincent Van Gogh

“Anyone who has never made a mistake has never tried anything new.” - Albert Einstein

“Challenges are what make life interesting. Overcoming them is what makes life meaningful.” - Joshua J. Marine

“It takes a different mindset to be successful in anything; that’s why there’s not a lot of super duper successful people, because it’s guys I know who may be ten times more talented than me, but they don’t work as hard.” - Rico Love

“Life isn’t about finding yourself. Life is about creating yourself.” - George Bernard Shaw

“Happiness depends on your mindset and attitude.” - Roy T. Bennett

“Our greatest weakness lies in giving up. The most certain way to succeed is always to try just one more time.” ― Thomas Edison

“Our greatest glory is not in never failing, but in rising every time we fail.” – Confucius

“Vision is not enough. It must be combined with venture. It is not enough to stare up the steps; we must also step up the stairs.” – Vaclac Havel

“Education is not the learning of facts, but the training of the mind to think!” – Albert Einstein

“No matter what, people grow. If you chose not to grow, you’re staying in a small box with a small mindset. People who win go outside of that box. It’s very simple when you look at it.” - Kevin Hart

“Believe you can and you are half way there.” ― Theodore Roosevelt

“I think anything is possible if you have the mindset and the will and desire to do it and put the time in.” - Roger Clemens

“May your choices reflect your hopes, not your fears.” ― Nelson Mandela

“Once your mindset changes, everything on the outside will change along with it.” - Steve Maraboli

“Leadership is a mindset that shifts from being a victim to creating results. Any one of us can demonstrate leadership in our work and within our lives.” - Robin S. Sharma

“Success is not an accident, success is a choice.” - Stephen Curry

“Eliminate the mindset of CAN’T! Because you can do anything!” - Tony Horton

“Anyone who stops learning is old, whether at twenty or eighty. Anyone who keeps learning stays young.” - Henry Ford

“It’s sort of a mental attitude about critical thinking and curiosity. It’s about mindset of looking at the world in a playful and curious and creative way.” - Adam Savage

“Before the beginning of brilliance, there must be great chaos. Before a brilliant person begins something great, they must look foolish in the crowd.” - Fu His

“Many of life’s failures are people who did not realize how close they were to success when they gave up.” - Thomas Edison

“Success is the ability to go from one failure to another with no loss of enthusiasm.” - Winston Churchill

“Most people never run far enough on the first wind to find out they’ve got a second. Give your dreams all you’ve got, and you’ll be amazed at the energy that comes out of you.” - William James

“Man’s main task in life is to give birth to himself, to become what he potentially is.” - Erich Fromm

“Don’t tell me how talented you are. Tell me how hard you work.” - Artur Rubenstein

“Finish each day and be done with it. You have done what you could … Tomorrow is a new day; begin it well and serenely and with too high a spirit to be encumbered with your old nonsense.” – Ralph Waldo Emerson

“You have not failed unless you have quit trying.” – Gordon B. Hinckley

“All things are difficult before they are easy.” - Thomas Fuller

“It does not matter how slowly you go so long as you do not stop.” – Confucius

“It is impossible to live without failing at something unless you live so cautiously that you might as well not have lived at all. In which case, you fail by default.” – J.K. Rowling

“We must get our hearts broken sometimes. This is a good sign, having a broken heart. It means we have tried for something.” – Elizabeth Gilbert

“Always do what you are afraid of doing.” – Ralph Waldo Emerson

“Twenty years from now you will be more disappointed by the things that you didn’t do than by the ones you did do. So sail away from the safe harbor. Explore. Dream. Discover.” – Mark Twain

“We realize the importance of our voices only when we are silenced.” – Malala Yousafzai

“Other women who are killing it should motivate you, thrill you, challenge you and inspire you.” – Taylor Swift

“I know for sure that what we dwell on is what we become.” – Oprah Winfrey

“The most effective way to do it, is to do it.” – Amelia Earhart

“The only thing that overcomes hard luck is hard work.” – Harry Golden

“How you gone win when you ain’t right within.” – Lauryn Hill

“Remember always that you not only have the right to be an individual, you have an obligation to be one.” – Eleanor Roosevelt

“A person who never made a mistake never tried anything new.” – Albert Einstein

“You’ve always had the power my dear, you just had to learn it for yourself.” – The Wizard of Oz

“Everyone wants to live on top of the mountain, but all the happiness and growth occurs while you’re climbing it.” – Andy Rooney

“The greatest thing in this world is not so much where we stand as in what direction we are moving.” – Johann Wolfgang von Goethe

“There is no failure. Only feedback.” – Robert Allen

“If you don’t like something change it; if you can’t change it, change the way you think about it.” – Mary Engelbreit

“I do not know the word ‘quit.’ Either I never did, or I have abolished it.” – Susan Butcher

“Happiness is when what you think, what you say, and what you do are in harmony.” – Gandhi

“The only real valuable thing is intuition.” – Albert Einstein

“Happiness can exist only in acceptance.” – George Orwell

“Passion is the genesis of genius.” – Tony Robbins

“It is our choices that show what we truly are, far more than our abilities.” – J. K Rowling

“Low self-esteem is like driving through life with your hand-break on.” – Maxwell Maltz

“It’s not that I’m so smart, it’s just that I stay with problems longer.” –Albert Einstein

“It takes courage to grow up and become who you really are.” - E.E. Cummings

“When the world says, ‘Give up,’ Hope whispers, ‘Try one more time.” – Unknown

“It’s kind of fun to do the impossible.” - Walt Disney

“Nothing will work unless you do.” - John Wooden

“Failure is success if we learn from it.” - Malcolm Forbes

“Becoming is better than being” - Carol S. Dweck

“Picture your brain forming new connections as you meet the challenge and learn. Keep on going.” - Carol S. Dweck

“Changing the game is a mindset.” - Robert Rodriguez

“Even if it makes no sense, accept whatever happens and protect your hopes because life wants you to win.” – Wesam Fawzi

“Because some people see a wall, and assume that’s the end of their journey. Others see it, and decide that it’s just the beginning.” – Angeline Trevena

“There are no shortcuts to excellence.” – Angela Duckworth

“Either find a way or make one!” – Hannibal

“Life is a progression of becoming who we are.”– J. R. Rim

“Many limitations exist only in your mind.” – Francis Shenstone

“Changing your mindset is a game changer.” – Frank Sonnenberg

“Nothing is impossible. The word itself says, ‘I’m possible.” – Audrey Hepburn