Life will be all about fun if you can take most of thing lightly by focusing in action. But it's not easy to do. Most of the people are depressed by thinking unnecessary thing or negative thought.

For that reason, here are some selected funny quotes for giving you some light moments or a little relief from the reality.

"Before you judge a man, walk a mile in his shoes. After that who cares?... He’s a mile away and you’ve got his shoes!" –Billy Connolly

"People say nothing is impossible, but I do nothing every day.” – A. A. Milne

"Accept who you are. Unless you're a serial killer." -Ellen DeGeneres

"Better to remain silent and be thought a fool than to speak out and remove all doubt.”– Abraham Lincoln

"Be stupid, be dumb, be funny, if that's who you are. Don't try to be someone that society wants you to be; that's stupid. So be yourself." - Christina Grimmie

“The best thing about the future is that it comes one day at a time.”– Abraham Lincoln

“The only mystery in life is why the kamikaze pilots wore helmets.”– Al McGuire

“Light travels faster than sound. This is why some people appear bright until you hear them speak.”– Alan Dundes

"No man has a good enough memory to be a successful liar.”– Abraham Lincoln

“Nobody realizes that some people expend tremendous energy merely to be normal.”– Albert Camus

"Do not take life too seriously. You will never get out of it alive.”– Elbert Hubbard 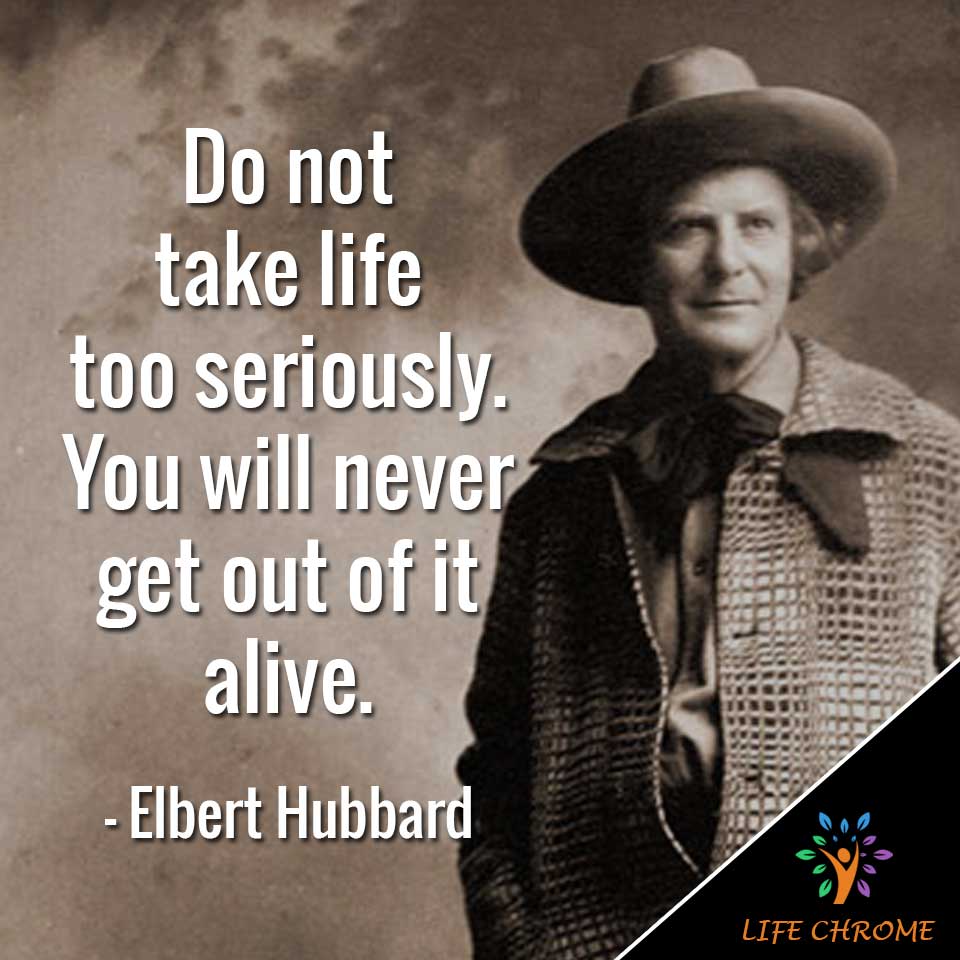 “The difference between stupidity and genius is that genius has its limits.”– Albert Einstein

“All the things I really like to do are either immoral, illegal or fattening.”– Alexander Woollcott

“It would be nice to spend billions on schools and roads, but right now that money is desperately needed for political ads.”– Andy Borowitz

"Forgiveness is a funny thing. It warms the heart and cools the sting." - William Arthur Ward

“The average dog is a nicer person than the average person.”– Andy Rooney

“At every party there are two kinds of people – those who want to go home and those who don’t. The trouble is, they are usually married to each other.”– Ann Landers

“If you want your children to listen, try talking softly to someone else.” – Ann Landers

“My opinions may have changed, but not the fact that I’m right.” – Ashleigh Brilliant

"Trust is hard to come by. That's why my circle is small and tight. I'm kind of funny about making new friends." - Eminem

“To be sure of hitting the target, shoot first, and call whatever you hit the target.” – Ashleigh Brilliant

“Trouble knocked at the door, but, hearing laughter, hurried away.” – Benjamin Franklin

"If a book about failures doesn't sell, is it a success?” - Jerry Seinfeld

"I am blessed with a funny gene that makes me enjoy life." -Karan Patel 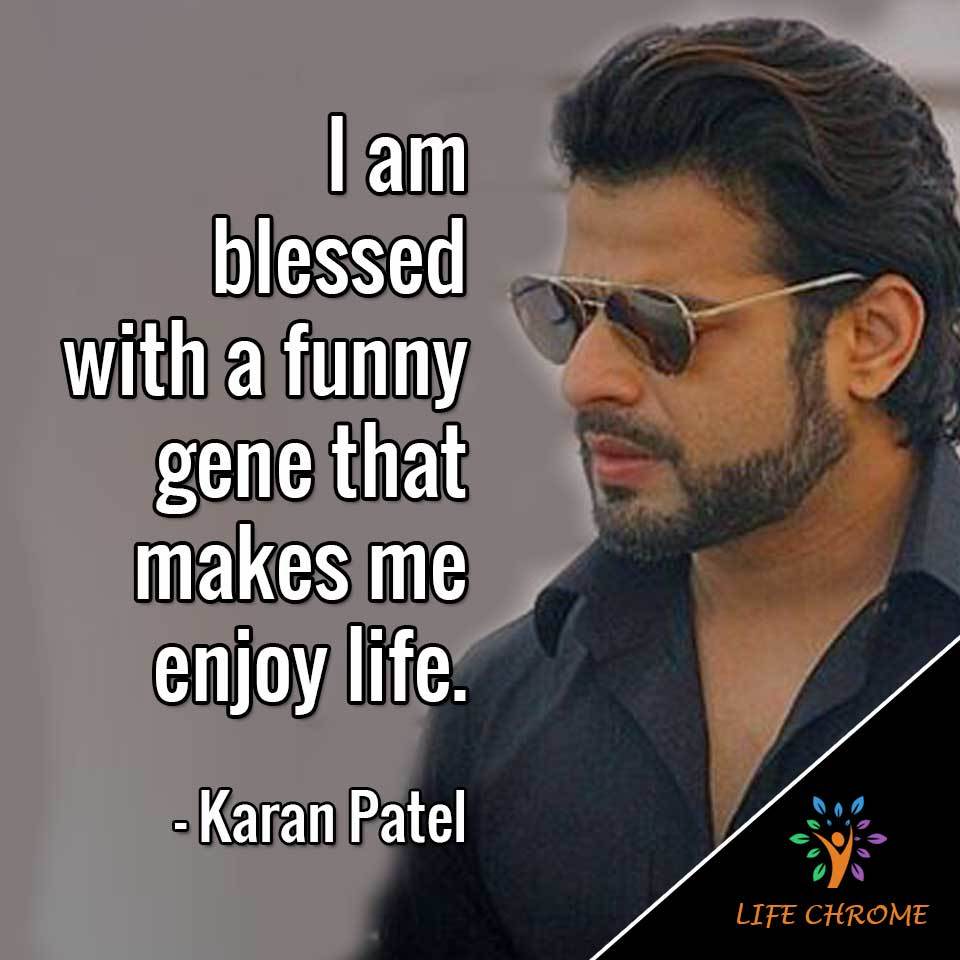 "Wine is constant proof that God loves us and loves to see us happy.”– Benjamin Franklin

“Have you noticed that all the people in favor of birth control are already born?”– Benny Hill

"Behind every great man is a woman rolling her eyes." - Jim Carrey

“Be who you are and say what you feel, because those who mind don’t matter and those who matter don’t mind.”– Bernard Baruch

"That's why they call it the American Dream, because you have to be asleep to believe it.” - George Carlin

“Most people would sooner die than think; in fact, they do so.”– Bertrand Russell

“The world is full of magical things patiently waiting for our wits to grow sharper.”– Bertrand Russell

"Everything that used to be a sin is now a disease.”– Bill Maher

"I'm sorry, if you were right, I'd agree with you." - Robin Williams

“Money won’t buy happiness, but it will pay the salaries of a large research staff to study the problem.”– Bill Vaughan

“The surest sign that intelligent life exists elsewhere in the universe is that it has never tried to contact us.”– Bill Watterson

"I did not attend his funeral, but I sent a nice letter saying I approved of it.” - Mark Twain

"If you could kick the person in the pants responsible for most of your trouble, you wouldn't sit for a month." - Theodore Roosevelt 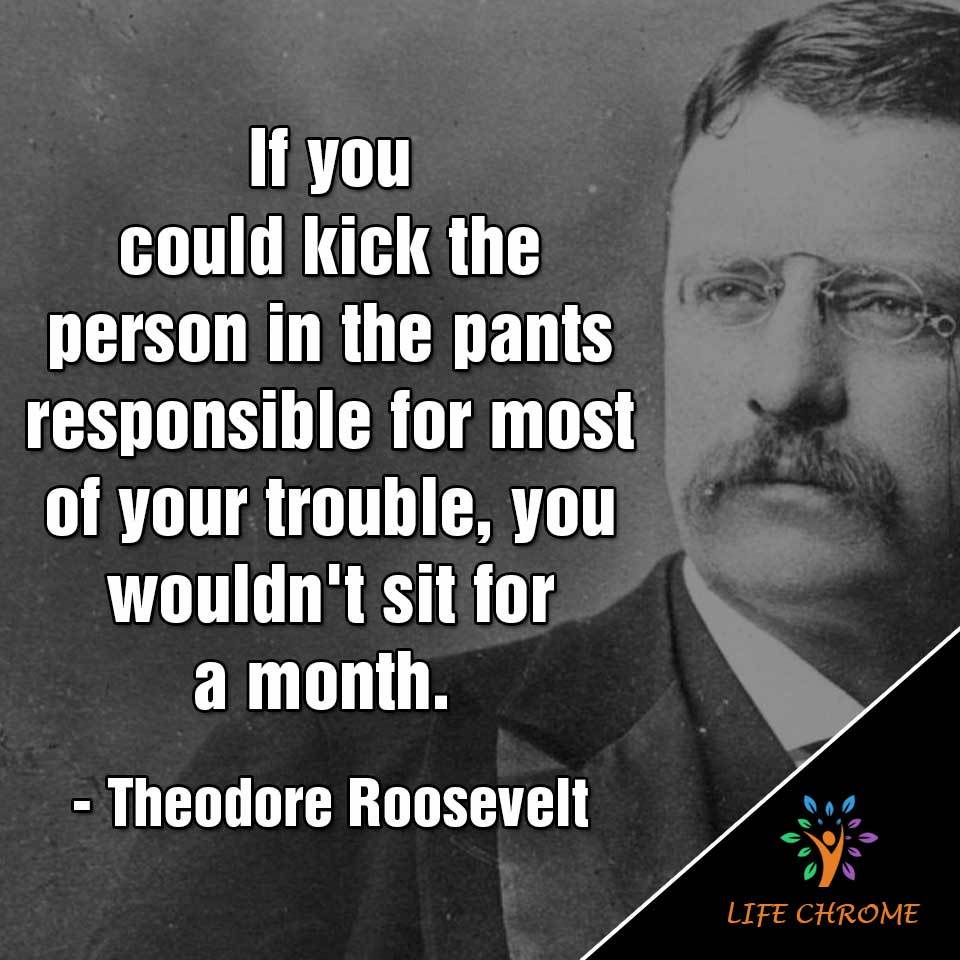 “Here’s something to think about: How come you never see a headline like ‘Psychic Wins Lottery’?”– Jay Leno

“My pessimism extends to the point of even suspecting the sincerity of other pessimists.”– Jean Rostand

“Haters are just confused admirers because they can’t figure out the reason why everyone loves you.”– Jeffree Star

“It’s amazing that the amount of news that happens in the world every day always just exactly fits the newspaper.”– Jerry Seinfeld

“Laugh a lot. It burns a lot of calories.”– Jessica Simpson

“Avoid fruits and nuts. You are what you eat.”– Jim Davis

“I’ve always wanted to go to Switzerland to see what the army does with those wee red knives.” – Billy Connolly

“Going to church doesn’t make you a Christian any more than going to a garage makes you an automobile.”– Billy Sunday

“If you’re going to tell people the truth, be funny or they’ll kill you.”– Billy Wilder

"Get your facts first, then you can distort them as you please." - Mark Twain 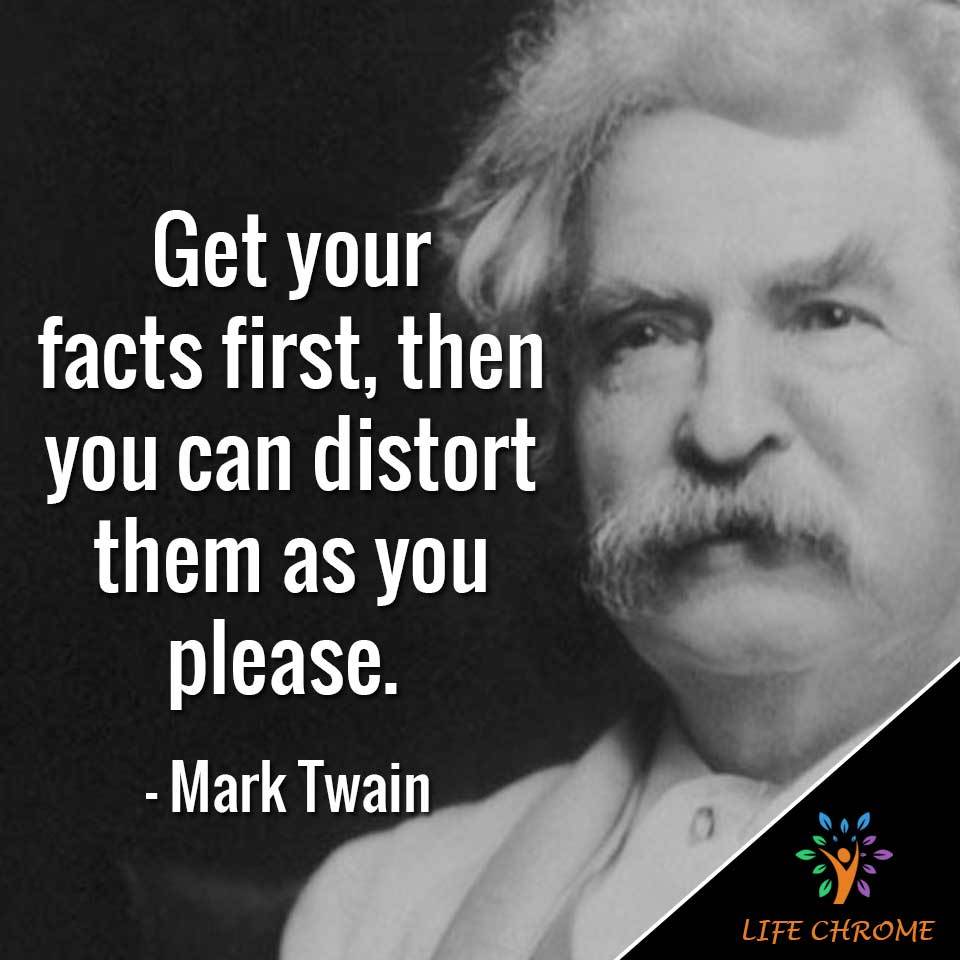 "A bank is a place that will lend you money if you can prove that you don’t need it.”– Bob Hope

“Inside me there’s a thin person struggling to get out, but I can usually sedate him with four or five cupcakes.”– Bob Thaves

“We never really grow up, we only learn how to act in public.”– Bryan White

“As a child my family’s menu consisted of two choices: take it or leave it.”– Buddy Hackett

"It's not true that I had nothing on. I had the radio on." -Unknown

"Well, don't expect us to be too impressed. We just saw Finnick Odair in his underwear."– Suzanne Collins

“My favorite machine at the gym is the vending machine.”– Caroline Rhea

“All right everyone, line up alphabetically according to your height.”– Casey Stengel

“He who laughs last didn’t get the joke.”– Charles de Gaulle

“I always arrive late at the office, but I make up for it by leaving early.”– Charles Lamb

"What is the best thing to do when you have a hole in a boat and water is leaking inside? Make another hole to drain the water." - Unknown

"You can lead a man to Congress, but you can't make him think." - Milton Berle 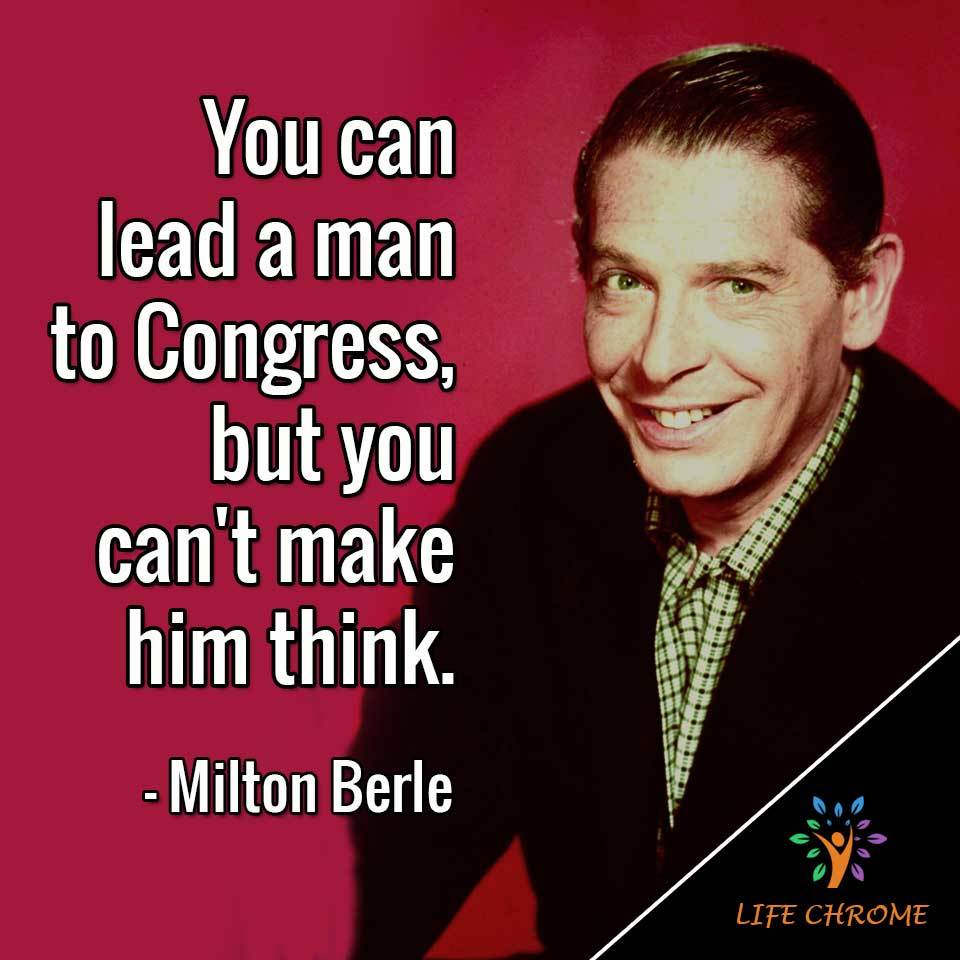 “Don’t worry about the world coming to an end today. It is already tomorrow in Australia.”– Charles M. Schulz

"When life gives you lemons, squirt someone in the eye.”- Cathy Guiswite

“By the time a man realizes that his father was right, he has a son who thinks he’s wrong.”– Charles Wadsworth

“A day without laughter is a day wasted.”– Charlie Chaplin

“High heels were invented by a woman who had been kissed on the forehead.”– Christopher Morley

“If you love something set it free, but don’t be surprised if it comes back with herpes.”– Chuck Palahniuk

“When I was a boy I was told that anybody could become President. I’m beginning to believe it.”– Clarence Darrow

“A stockbroker urged me to buy a stock that would triple its value every year. I told him, ‘At my age, I don’t even buy green bananas'.”– Claude Pepper

“They say marriages are made in Heaven. But so is thunder and lightning.”– Clint Eastwood

"The planet is fine. The people are fucked.”– George Carlin

“I’m too drunk to taste this chicken.”– Colonel Sanders

“A study in the Washington Post says that women have better verbal skills than men. I just want to say to the authors of that study: ‘Duh.'”– Conan O’Brien

“Starbucks says they are going to start putting religious quotes on cups. The very first one will say, ‘Jesus! This cup is expensive!'”– Conan O’Brien

“If you think you are too small to make a difference, try sleeping with a mosquito.”– Dalai Lama

“Laughing at our mistakes can lengthen our own life. Laughing at someone else’s can shorten it.”– Cullen Hightower

“Patriotism is your conviction that this country is superior to all others because you were born in it.”– George Bernard Shaw

“If you can’t live without me, why aren’t you dead already?”– Cynthia Heimel