Mistakes you can learn from; sins stay with you forever.

So many people in the world would rather stay in a situation that's painful but familiar because they're comfortable with it. Not a lot of people have the strength or heart to realize when something's not good for them and to turn around and be alone. It is always the nights you cannot remember that eventually become the stories you don’t forget.

It is always the nights you cannot remember that eventually become the stories you don’t forget.

I grew up poor in crappy situations... various crappy situations. What kept me sane was reading and music. I had so many different literary tastes growing up, be it fiction like Stephen King or Piers Anthony or non-fiction like reading Hunter S. Thompson essays or reading the Beats. I was a huge fan of the Beat movement.

I don't mean to be overly sensitive or anything like that, but you just have to take a minute in every day, and just reflect on where you are, and just realise what you've got, because you just never know where the next huge change in your life is going to come from.

Nobody can dare me to do anything that I don't come up with on my own.

I think people are tired of fake music, man. And there's a lot of it. Technology has reached the point where any boob can walk into a studio and with a little Auto Tuning you can have a hit song. I think it's pathetic.

Do what you do and mean it every second of the day. If you don't, you're living someone else's life. 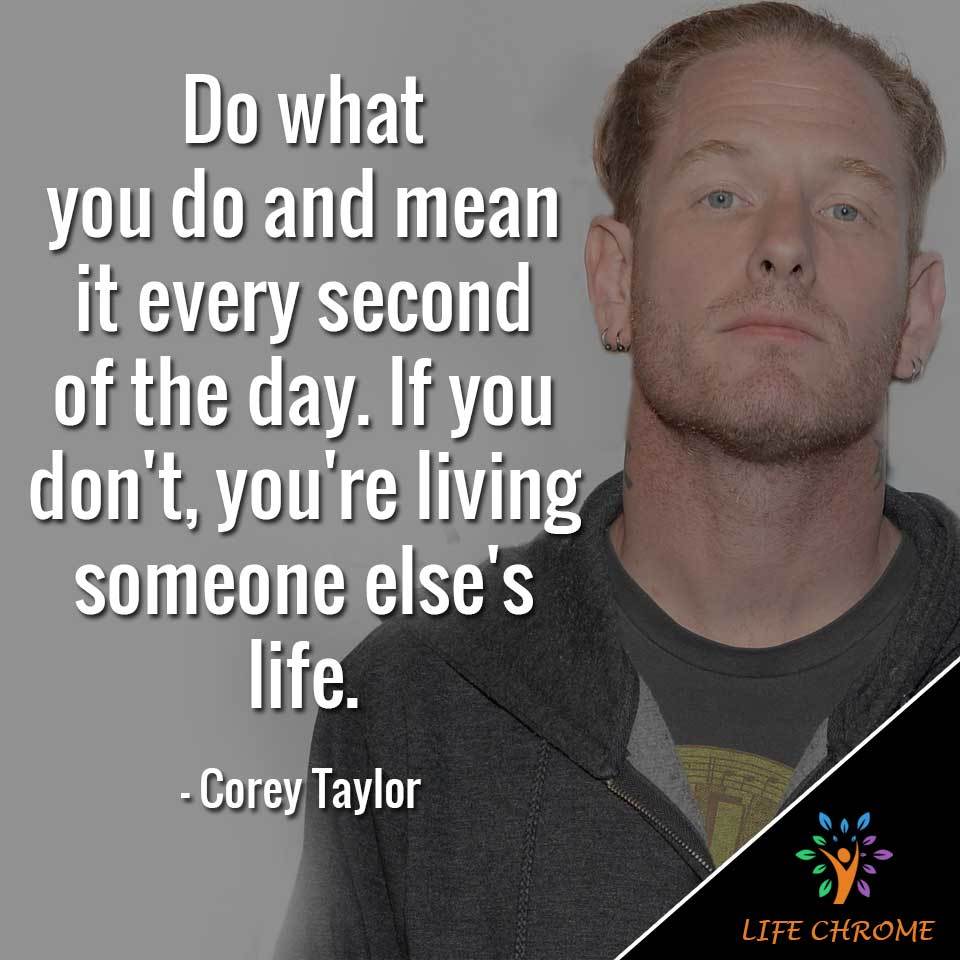 A philosopher thinks out loud to make things better for everyone else. Fanatics make themselves louder because they think they are better than everyone else.

I'm a Gibson guy. I play anything from Hummingbirds to J200s.

I can’t remember who said it, but there’s a great saying that goes, “Dumb should hurt.

Yeah, I crack myself up a lot more than I crack anybody else up, but that is okay. At least I am smart enough to get my own jokes.

If the world’s going to end someday, I was kind of hoping the soundtrack wouldn’t suck so fucking bad. But when the melodies are electronically corrected and the humanity has been sucked clean, it makes me beg for the apocalypse.

The best friends you will ever have are the ones who do not make you feel like you owe them a damn thing.

I don't feel guilty about the music I love. If you feel guilty about something you dig, then you should stop feeling guilty about it. One of my favorite albums to this day is the 10th anniversary ensemble cast of 'Les Miserables,' the ultimate cast recording, and it is still something I love listening to top to bottom.

I always tell the fans, 'Screw it! Like what you like. Listen to what you want.' Insisting that one type of music is better than the next is snobbery, and I have no time for that. Check out all the music that's out there. There's great stuff you're probably missing.

People have just as much capacity to be good as they do to be shit. It's a choice. People make choices. So they need to make better fucking choices.

Bad things happen when good people pretend nothing is wrong. 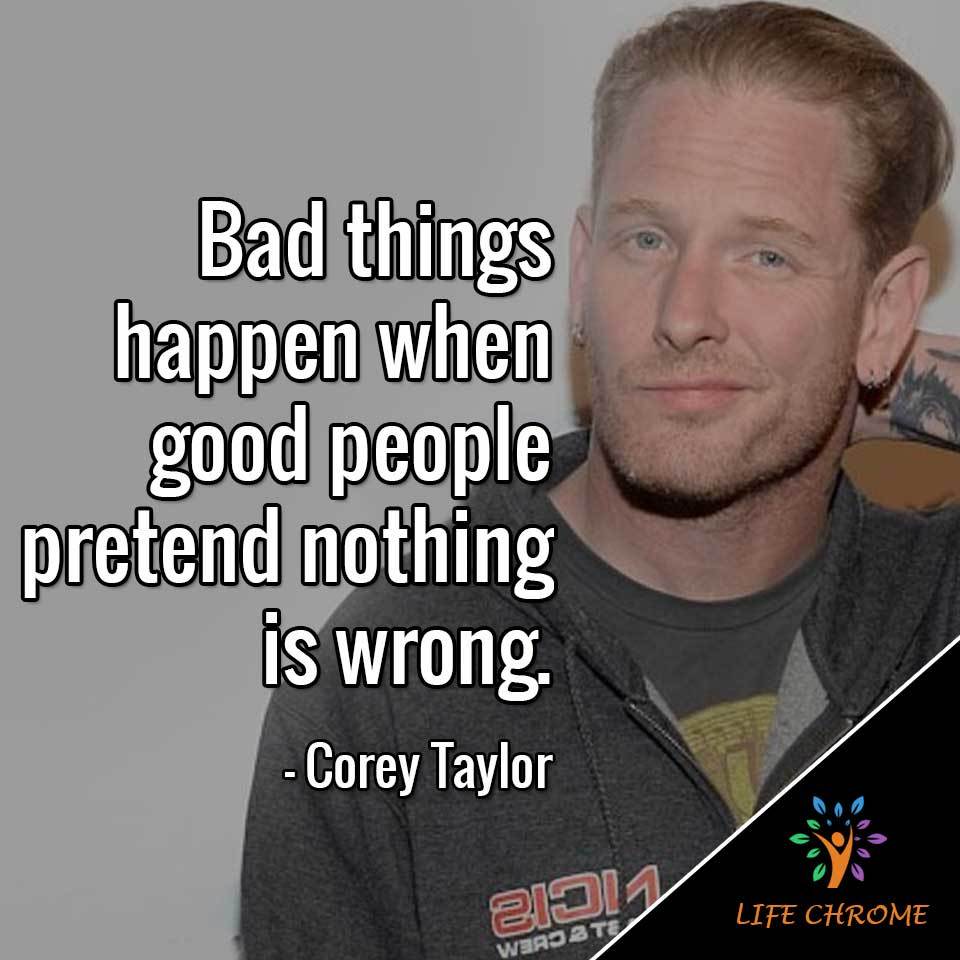 Emulation is a sincere form of flattery, but individuality is the only form of immortality.

As passion goes, wrath—or rage—is nearly indistinguishable from love in its intensity, the two epic ends of the maelstrom that makes us human.

The first year I was sober was probably the worst year of my life. My immune system was screwed. I completely isolated myself. I was weak all the time. I didn't know who I was.

You don't break ground by doing the same thing over and over and over. That's like standing in place. You have to risk to gain it all.

I haven’t been everywhere, but I’ve been to enough “wheres” to know that Earth has pockets of stupid popping up north, south, east, and west. From the equator to the prime meridian—dumb does not so easily wash off.

You have to get to the next level, or you're gonna get stuck where you are for the rest of your life. 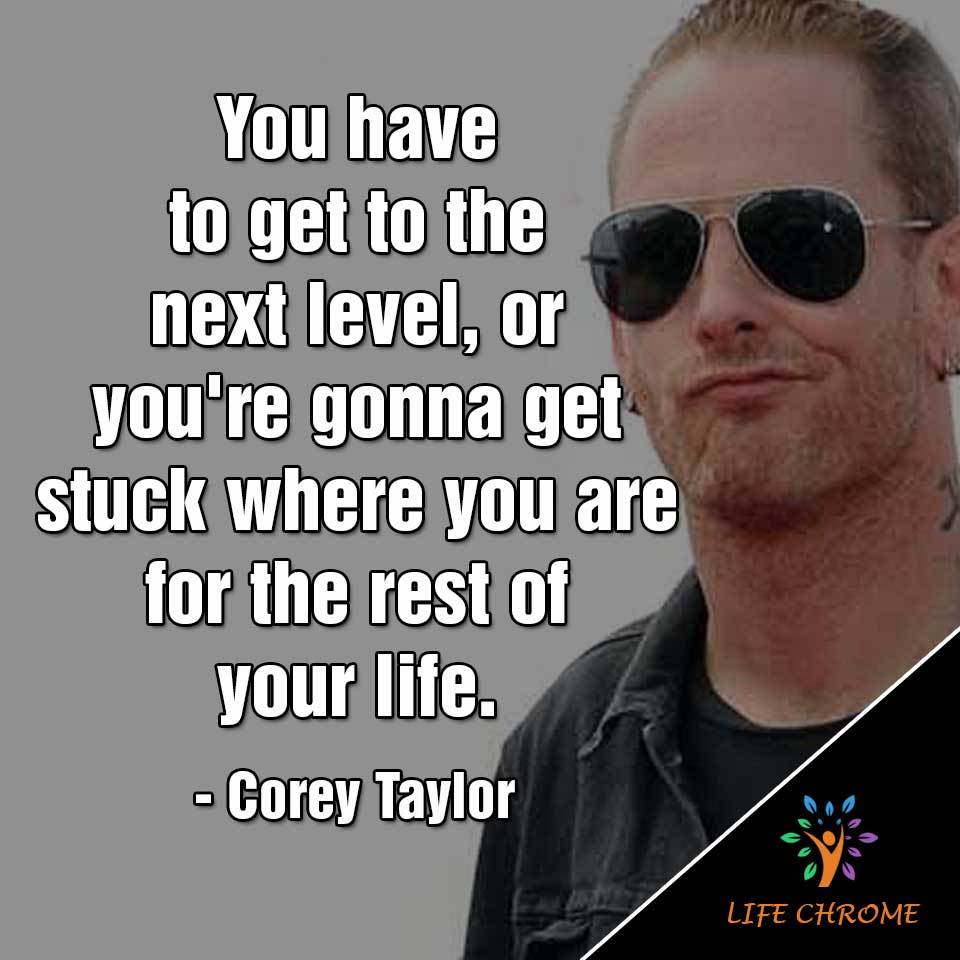 I will not be a man satisfied until I am a man exhausted.

The best way to make God laugh is to announce your plans out loud.

If you want to be taken seriously, always check your fly.

The wheels on the bus may go ’round and ’round, but that bus might run you over if the driver gets fired.

I won’t have to deal with the smashing, the smushing, the ramming and the cramming, the arguments and the impudence.

It's the chaos theory of women peeing in the shower that scares the shit out of me.

I am a man ruled by music- I live, die, fight and survive for it.

We are what happens when smart monkeys fuck.

Do you know why this country is starting to eat itself? It's because we handed it a knife and fork, and said, 'Chow down, Cupcake.

I grew up in a trailer park eating mayonnaise sandwiches, and I'm still hungry. I don't think I'll ever not be hungry.

'The Blair Witch Project' is great for motion sickness. The first time you see it, it is extremely creepy. The first time I saw it, I saw it on a bootleg tape on a tour bus before it had even come out. It was one of the first movies I'd seen like that. I didn't even realize it was a damn movie!

I've never tried to be anything but me. Even with Slipknot, where it can almost feel like a roll sometimes, it's still a part of who I am. It's a very strong and passionate part of who I am, and I'm lucky enough to have an audience that is really open to what I do.

As a writer, as a lyricist, you're just trying to make sure that you're not repeating yourself. And that's a danger for a lot of people. So for me, I just try to keep taking corners and trying to find new paths.

I may never let go of my wrath, my anger, but I will always have the last laugh. 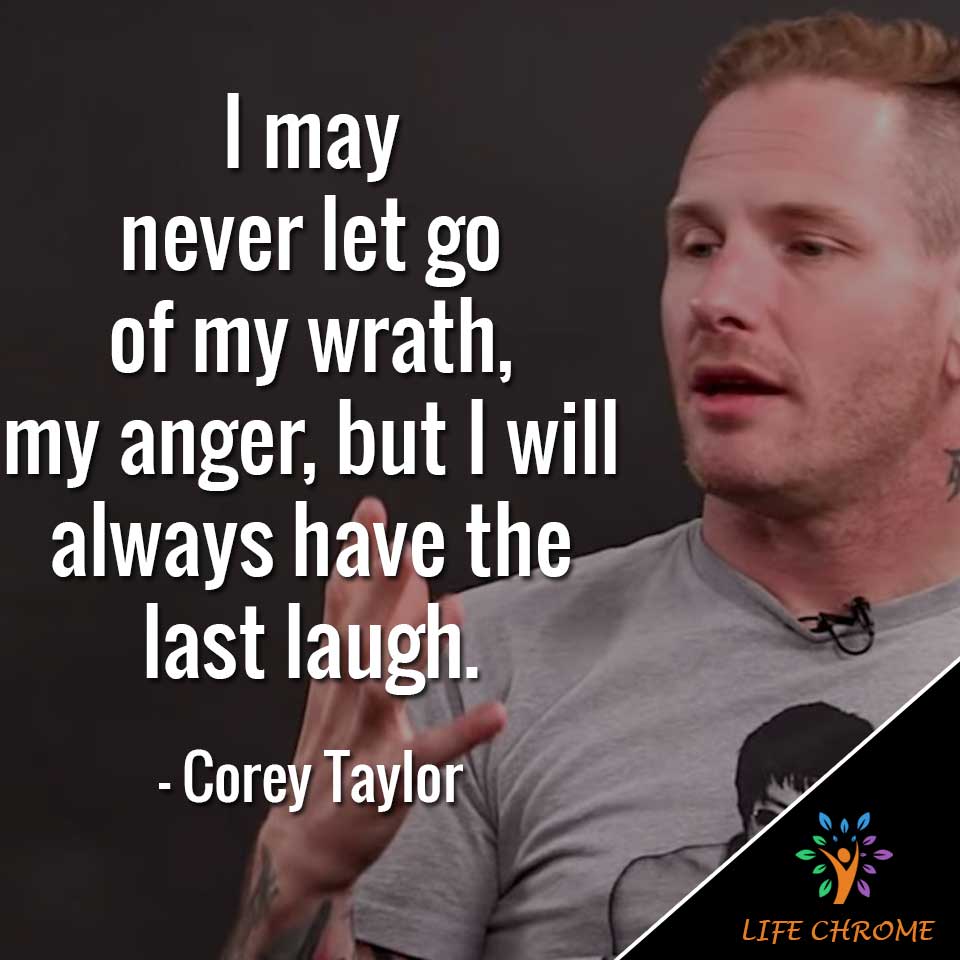 The biggest difference between me and other artists out there is that they'll put anything out to sell a record or sell a ticket.

The people I respect the least are the ones that take themselves way too seriously.

People such as Hunter S. Thompson and the Beats were a huge influence on me, not just in what they were saying, but how they said it.

Some of the smartest people I know are metal fans.

I think you're always gonna have half the generation that's lazy. But I think it makes the other half work that much harder. 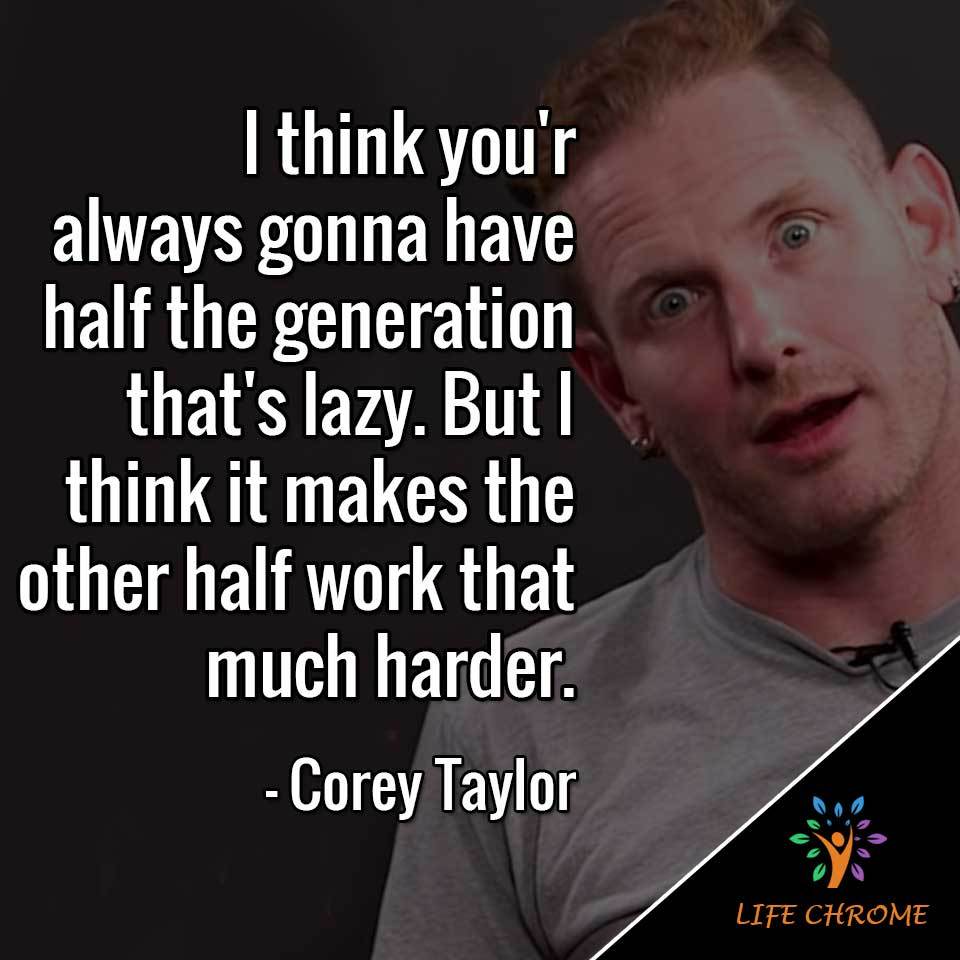 If you are too overwhelmed, then when you sit down and try to write something, it feels forced. There's nothing worse than forced music. I mean, this world has enough of that right now, where it's basically McDonald's making music. 'Everybody needs another hamburger and fries.' Here's a piece of crap that nobody's gonna care about it two years.

There's times when I'm cleaning the kitchen, and while I'm doing that, I'm singing and air guitaring with a broom to 'You Should Be Dancing.

I love the fact that people can relate to what I'm saying, even if it's not for the same subject I was writing about. That is the power of real music and real expression.

I'm not gonna do the same, tired, standard 'I was born in a log cabin...' kind of book. There's so much more I want to do.

When I'm working on a Slipknot song, it's like a switch flips in my head. I can go there easily - it doesn't take a lot of soul searching - and it's a dark, almost sinister place. Stone Sour is more the way I've always written. It's a different tone.

A song is only as strong as its foundation, and when it comes so naturally in any setting, those are the songs that will hopefully outlive you, maybe even outlive the next generation of You.

I feel like I've got a novel in me somewhere, but that's something... I was just talking to a buddy of mine about it, who's a writer as well, and he's nearly done with his first novel, and it's taken him 11, 12 years to do it. And I can totally understand; it's a long process.

I have several books I can read over and over. With fiction, it's 'The Stand' by Stephen King, which is my favorite all time. I read that at least once a year, the version which has 100,000 extra words, which is like the director's cut and unabridged. I love the story. I love the social connotation to it.

Playing live is a lost art, and you don't see a lot of bands that go out and play the way the older bands do. It's a celebration, and a lot of people treat it like a commercial or a distraction.

As much as I love Slipknot, I don't want that to carry over into what I do for Stone Sour. I want both bands to stand on their own.

I'm a very lucky guy. I get to write music that I love, and lo and behold, people seem to really like it. I know how fortunate I am.