Have you heard about Chanakya and Chanakya quotes? He is the one of the most popular persons in the Indian Continent. Chanakya was a philosopher, jurist, teacher and economist who was also popular with name Kautilya and Vishnugupta.

As a royal adviser of Chandragupta Maurya, He has a great influence in the every sectors of the Maurya Empire. Till today, he is very well known person for quotes and Chanakya Niti(Rules). Learn more about Chanakya from Wikipedia.

In this post, we are giving you the top quotes of this legend. You can learn more Quotes....

Even if a snake is not poisonous, it should pretend to be venomous. 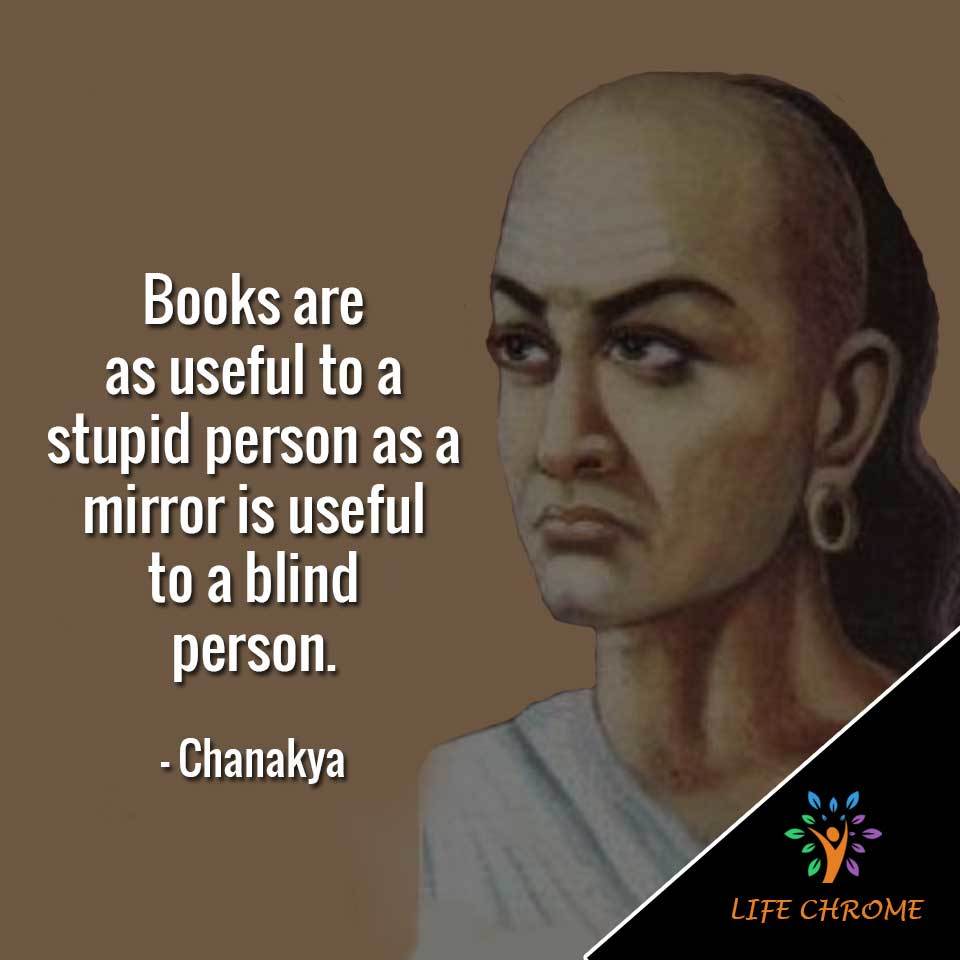 The biggest guru-mantra is: never share your secrets with anybody. It will destroy you.

A person should not be too honest. Straight trees are cut first and honest people are screwed first. 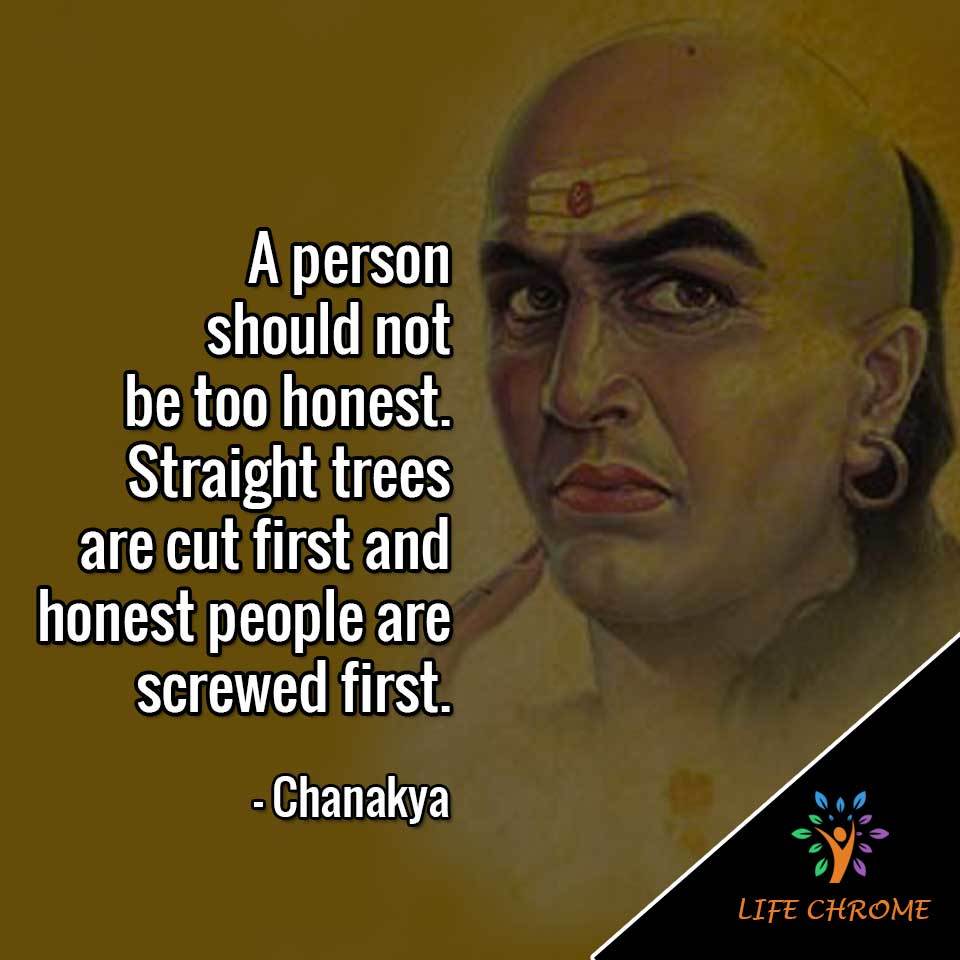 The one excellent thing that can be learned from a lion is that whatever a man intends doing should be done by him with a whole-hearted and strenuous effort.

A man is born alone and dies alone; and he experiences the good and bad consequences of his karma alone; and he goes alone to hell or the Supreme abode.

As soon as the fear approaches near, attack and destroy it.

The hearts of base men burn before the fire of other's fame, and they slander them being themselves unable to rise to such a high position.

The fragrance of flowers spreads only in the direction of the wind. But the goodness of a person spreads in all directions.

The world's biggest power is the youth and beauty of a woman.

A woman does not become holy by offering by charity, by observing hundreds of fasts, or by sipping sacred water, as by sipping the water used to wash her husbands feet.

A good wife is one who serves her husband in the morning like a mother does, loves him in the day like a sister does and pleases him like a prostitute in the night.

Once you start working on something, don’t be afraid of failure and don’t abandon it. People who work sincerely are the happiest.

He who is overly attached to his family members experiences fear and sorrow, for the root of all grief is attachment. Thus one should discard attachment to be happy.

Once a man’ ambition is kindled, nothing can stop him. For a businessman, no country can be too far. For a wise man, there is no such thing as a foreign land. He is at home wherever he goes.

Education is the best friend. An educated person is respected everywhere. Education beats the beauty and the youth. 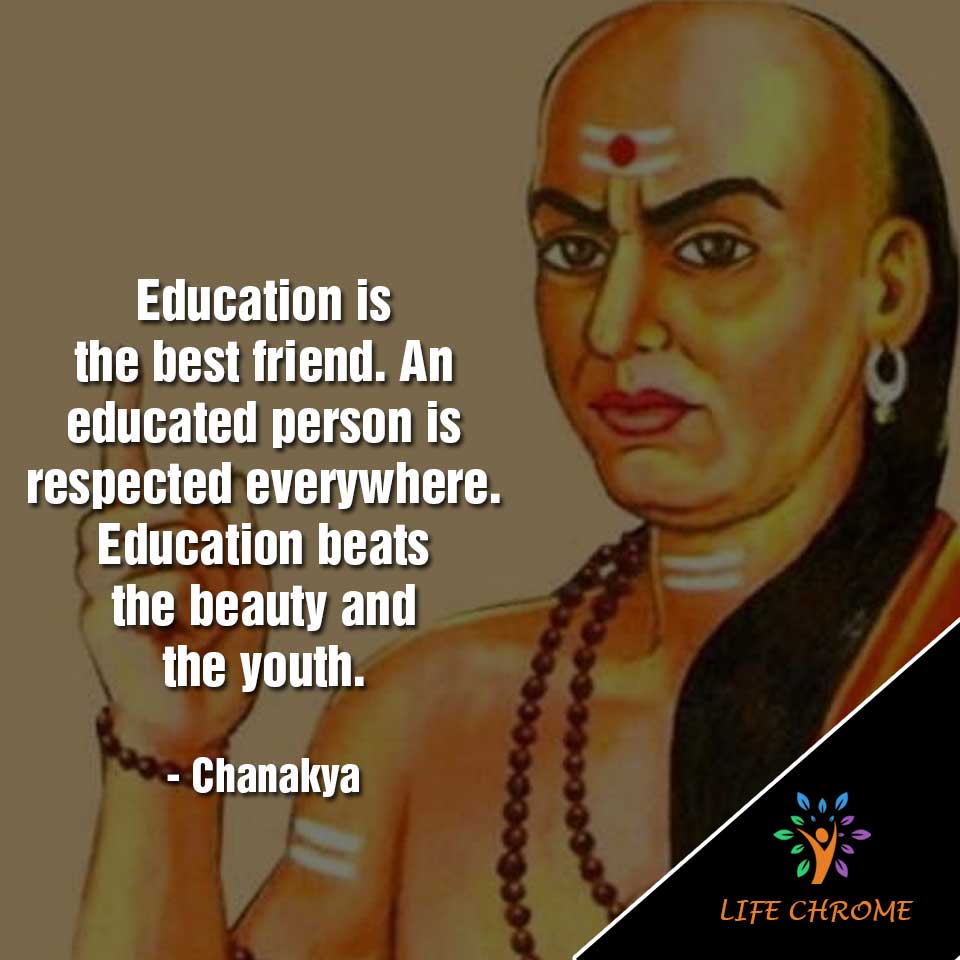 Those born blind cannot see; similarly blind are those in the grip of lust. Proud men have no perception of evil; and those bent on acquiring riches see no sin in their actions.

God dwells not in the wooden, or stone or earthen idols. His abode is in our feeling, our thoughts. It is only through the feeling that we deem God existing in these idols.

O wise man! Give your wealth only to the worthy and never to others. The water of the sea received by the clouds is always sweet.

He who befriends a man whose conduct is vicious whose vision impure, and who is notoriously crooked, is rapidly ruined.

Test a servant while in the discharge of his duty, a relative difficulty, a friend in adversity, and a wife is misfortune.

A man is great by deeds, not by birth.

As long as your body is healthy and under control and death is distant try to save your soul; when death is immanent what can you do?

God is not present in idols. Your feelings are your God. The soul is your temple. 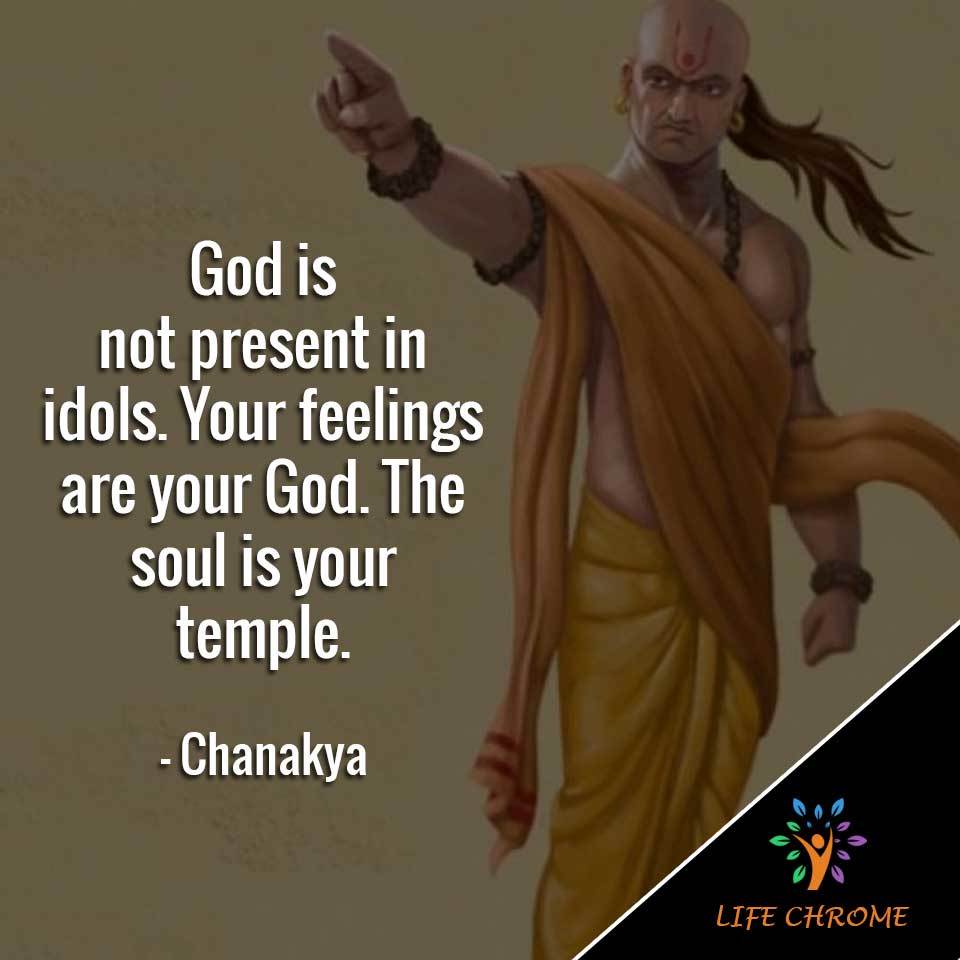 There is no austerity equal to a balanced mind, and there is no happiness equal to contentment; there is no disease like covetousness, and no virtue like mercy.

Learn from the mistakes of others... you can’t live long enough to make them all yourselves.

You can win over a greedy greedy by offering money, a proud person by covering before him. You can win a foolish by agreeing with him and you can win a scholar by truth only.

For one whose heart melts with compassion for all creatures; what is the necessity of knowledge, liberation, matted hair on the head, and smearing the body with ashes.

Foolishness is indeed painful, and verily so is youth, but more painful by far than either is being obliged in another person's house.

There is no present and future of the lazy. 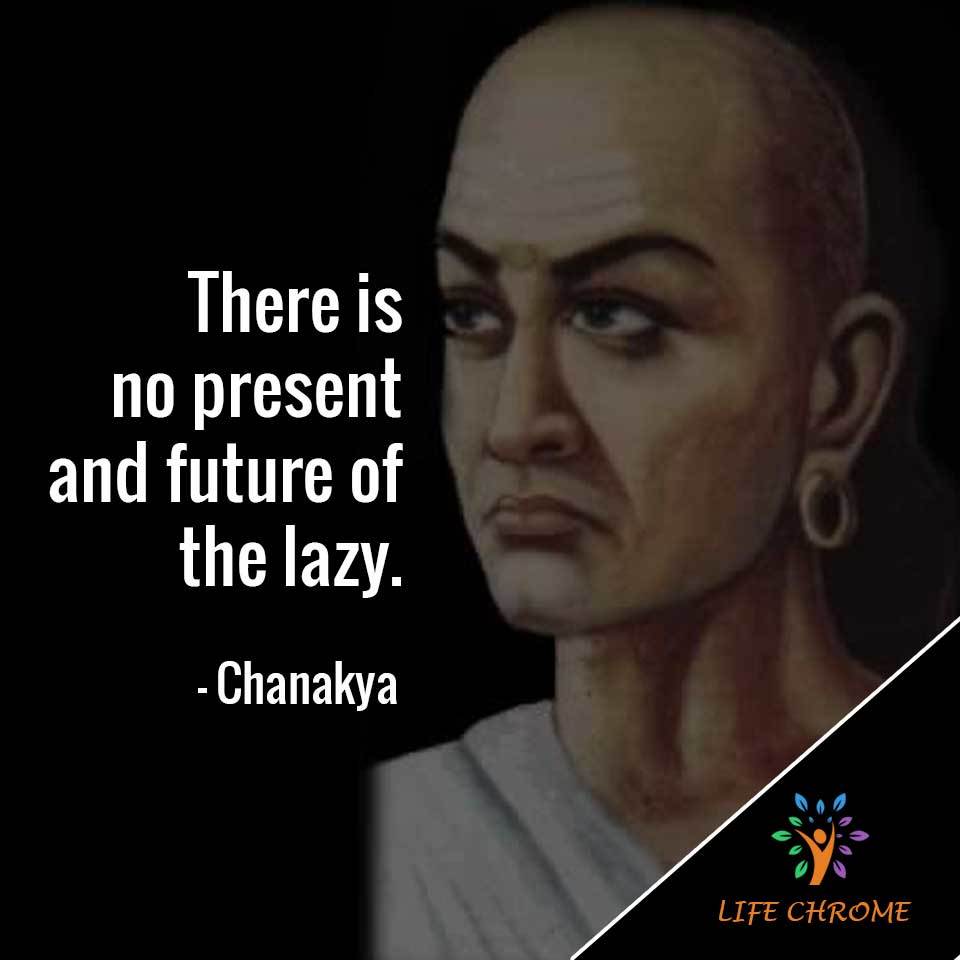 Never settle for anything less than what you deserve. It’s not pride, it’s self respect.

One’s behavior will reveal which clan one has descended from. One’s speech will reveal one’s nationality. One’s respect for others reflects the measure of grace and love in one’s heart. One’s body mirrors the kind of food one consumes.

Never make friends with people who are above or below you in status. Such friendships will never give you any happiness.

We should not fret for what is past, nor should we be anxious about the future; men of discernment deal only with the present moment.

One whose knowledge is confined to books and whose wealth is in the possession of others can use neither knowledge nor wealth when the need for them arises.

The king shall lose no time when the opportunity waited for arrives.

Purity of speech, of the mind, of the senses, and of a compassionate heart are needed by one who desires to rise to the divine platform.

The happiness and peace attained by those satisfied by the nectar of spiritual tranquility is not attained by greedy persons restlessly moving here and there.

Do not reveal what you have thought upon doing, but by wise council keep it secret being determined to carry it into execution.

The wise man should restrain his senses like the crane and accomplish his purpose with due knowledge of his place, time and ability.

All the creatures are pleased by loving words; and therefore we should address words that are pleasing to all, for there is no lack of sweet words.

Drop the idea that attachment and love are one thing. They are enemies. It is attachment that destroys all love.

He who is prepared for the future and he who deals cleverly with any situation that may arise are both happy, but the fatalistic man who wholly depends on luck is ruined.

Accumulated wealth is saved by spending just as incoming fresh water is saved by letting out stagnant water.

Avoid him who talks sweetly before you but tries to ruin you behind your back, for he is like a pitcher full of poison with milk on top.

Treat your kid like a darling for the first five years. For the next five years, scold them. By the time they turn sixteen, treat them like a friend. Your grown up children are your best friends.

He who has wealth has friends and relations; he alone survives and is respected as a man.

She is a true wife who is clean (suci), expert, chaste, pleasing to the husband, and truthful.

He who gives up shyness in monetary dealings, in acquiring knowledge, in eating and in business, becomes happy.

Learning is like a cow of desire. It, like her, yields in all seasons. Like a mother, it feeds you on your journey. Therefore, learning is a hidden treasure.

He who runs away from a fearful calamity, a foreign invasion, a terrible famine, and the companionship of wicked men is safe.

The poor wish for wealth; animals for the faculty of speech; men wish for heaven; and godly persons for liberation.

A human being should strive for four things in life — dharma (duty), artha (money), kama (pleasure) and moksha (salvation). A person who hasn’t striven for even one of these things has wasted life.

Don't judge the future of a person based on his present conditions, because time has the power to change black coal to shiny diamond.

Brass is polished by ashes; copper is cleaned by tamarind; a woman, by her menses; and a river by its flow.

Do not put your trust in a bad companion nor even trust an ordinary friend, for if he should get angry with you, he may bring all your secrets to light.

What vice could be worse than covetousness? What is more sinful than slander? For one who is truthful, what need is there for austerity? For one who has a clean heart, what is the need for pilgrimage?

Humbleness is at the root of sense control.

Victory over the senses (self-control) is the root of (stability of) state.