Camping is one most outdoor activities for those who wants to spend their vacation by taking challenges.

In this post, we are giving you some exciting camping quotes. If you want to learn more about Camping, you can visit Wikipedia.

"We now no longer camp as for a night, but have settled down on earth and forgotten heaven." – Henry David Thoreau

"It always rains on tents. Rainstorms will travel thousands of miles, against prevailing winds for the opportunity to rain on a tent." – Dave Barry

"I got into an argument with a girlfriend inside of a tent. That’s a bad place for an argument, because then I tried to walk out and slammed the flap. How are you supposed to express your anger in this situation? Zipper it up really quick?" – Mitch Hedberg

"The fire is the main comfort of the camp, whether in summer or winter, and is about as ample at one season as at another.It is as well for cheerfulness as for warmth and dryness." – Henry David Thoreau

"Camping: The art of getting closer to nature while getting farther away from the nearest cold beverage, hot shower and flush toilet." – Unknown

"A lot of parents pack up their troubles and send them off to summer camp." – Raymond Duncan

"Real freedom lies in wildness, not in civilization." – Charles Lindbergh 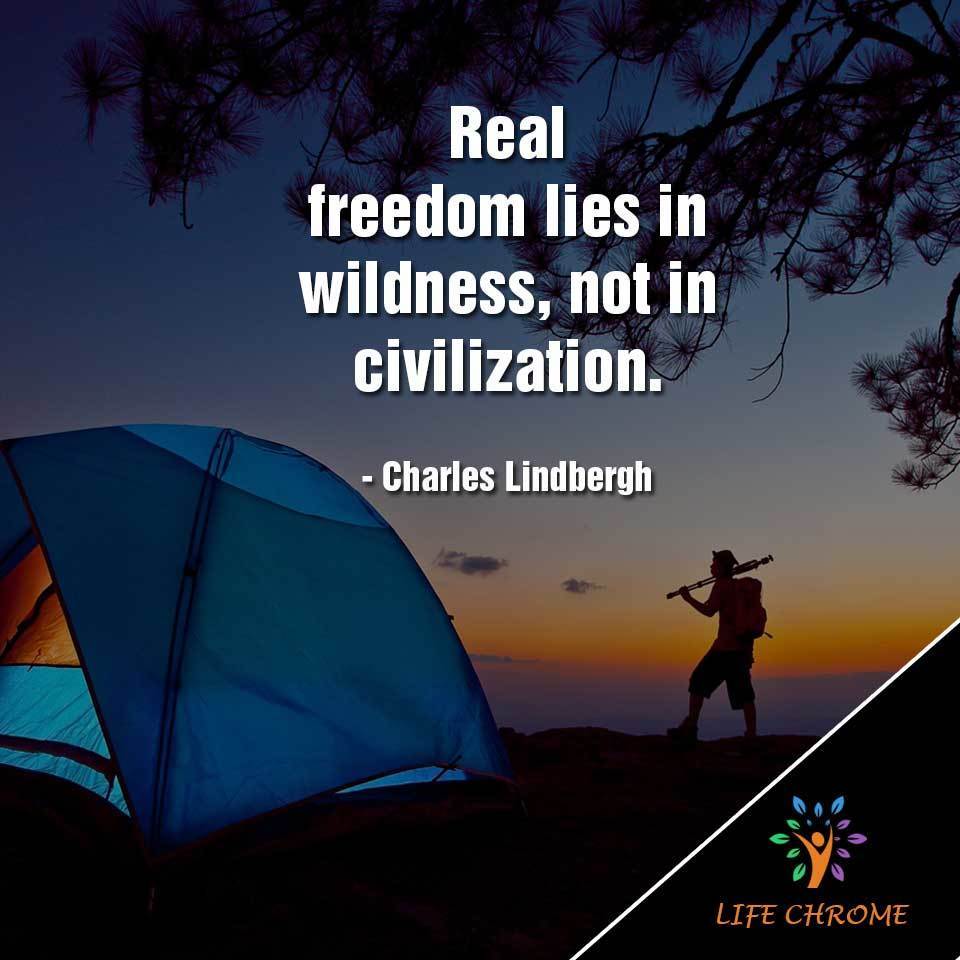 "What I like about camping is you can get really dirty. Either you’re all by yourself, so no one else sees you, or everyone you’re with is just as dirty as you are, so nobody cares." – Anonymous

"Over 150 ways to feel really, Really good without alcohol or other drugs." – Alex J. Packer

"Retirement is not the end of the roads. It's the beginning of the open highway." – Unknown

"We must take adventures in order to know where we truly belong." –Unknown

"I haven't been everywhere, but it's on my list." – Unknown

"May the forest be with you." – Unknown

"I'm in need of a country night with a bonfire, good music, great friends and a million stars." – Unknown

"Home is where you park it." – Unknown

"I Have Many Problems ... Camping Solves Them All." – Unknown 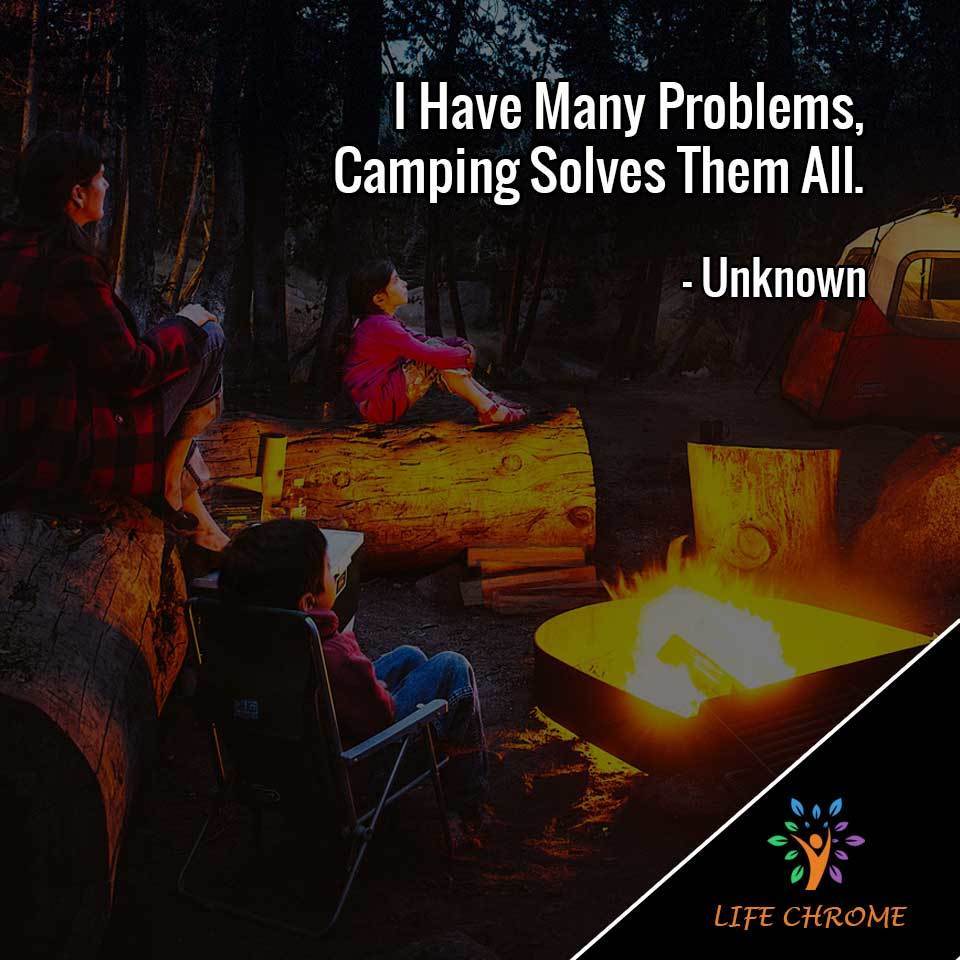 "There is no Wifi in the forest, but i promise you will find a better connection." – Unknown

"Of all the paths you take in life, make sure a few are dirt." – Unknown

It's impossible to walk in the woods and be in a bad mood at the same time." – Unknown

"I think camping is one of those things where if you're forced into it as a child, you'll probably hate it as an adult". - Jeremy Irvine 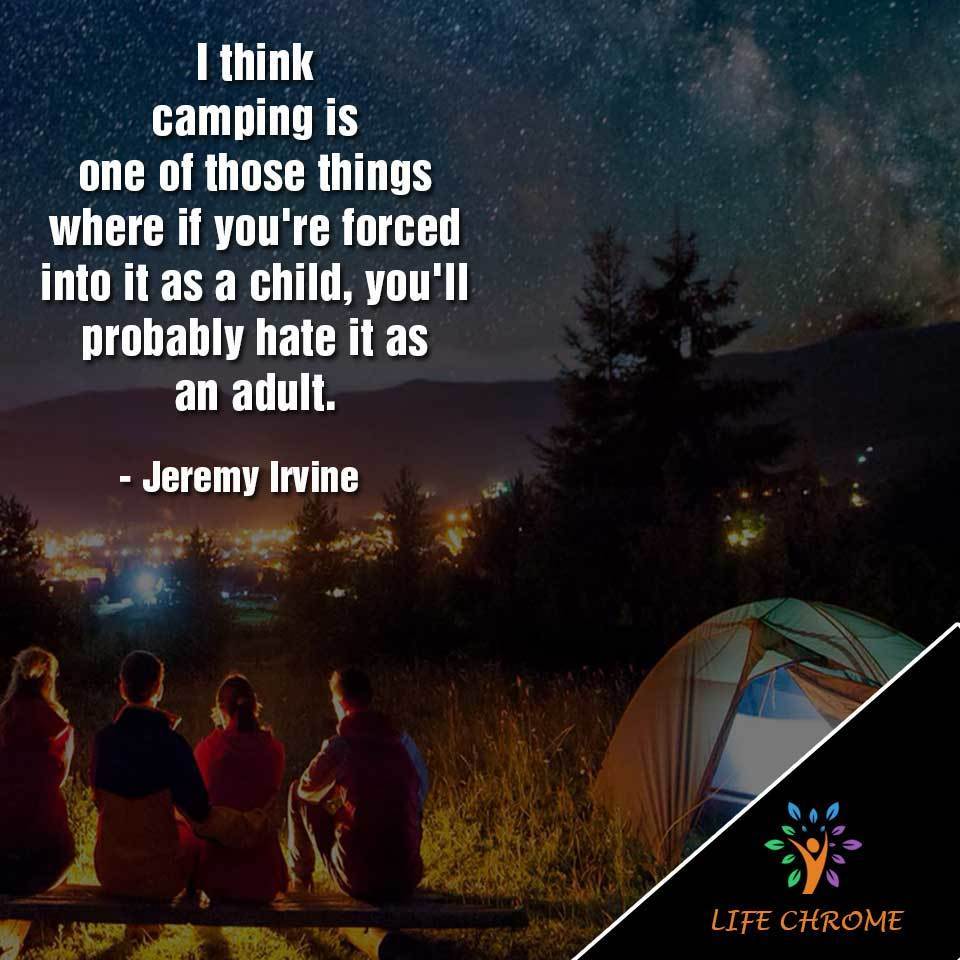 ""I want to camp so long that i forget all my passwords." – Unknown

Not all those who wander are lost." – Unknown

"Some national parks have long waiting lists for camping reservations. When you have to wait a year to sleep next to a tree, something is wrong." – George Carlin 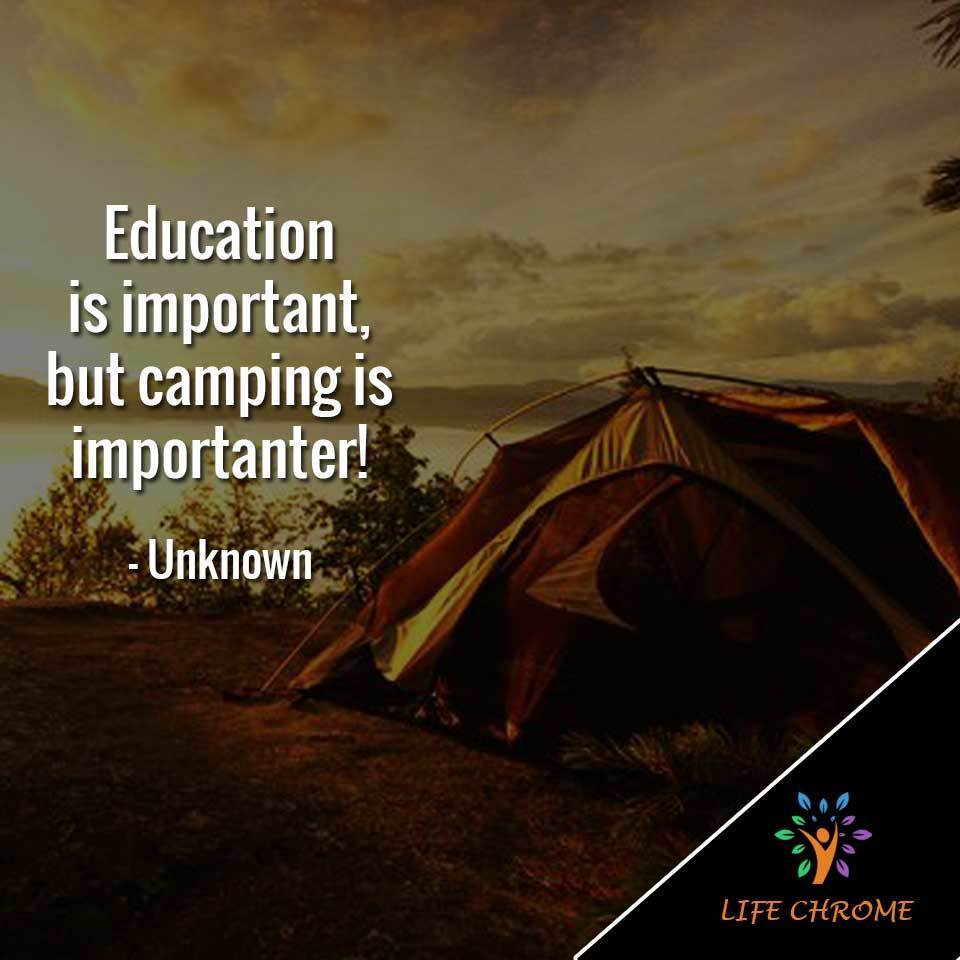 ""But the place which you have selected for your camp, though never so rough and grim, begins at once to have its attractions, and becomes a very centre of civilization to you: "Home is home, be it never so homely." – Henry David Thoreau

The meadow stones glowed white-green and a flinty wind worked over the meadow, scraped the fire low, then ruffled it into yellow silk sashes." – Annie Proulx

"The ultimate camping trip was the Lewis and Clark expedition." – Dave Barry

"To pitch my tent with no prosy plan, To range and to change at will; To mock at the mastership of man, To seek Adventure's thrill." – Robert W

"Sometimes I long for a lazy camp Five hundred miles from home, Where the eagle flies in the clear blue sky And the grizzly bear does roam, A snow white peaklike giant stands In the midst of the tall pine trees, Away from the constant ring of the phone For ever calling me..." – J.H. Stallings

"Light a campfire and everyone's a storyteller." – John Geddes

"Somebody told me it was frightening how much topsoil we are losing each year, but I told that story around the campfire and nobody got scared." – Jack Handey

"I married a woman who loves to camp, and I am what you would call "indoorsy"... My wife always brings up, "Camping's a tradition in my family." Hey, it was a tradition in everyone's family 'til we came up with the house." – Jim Gaffigan

"How is it that one match can start a forest fire, but it takes a whole box of matches to start a campfire?" – Christy Whitehead

"When using a public campground, a tuba placed on your picnic table will keep the campsites on either side vacant." – Author unknown

"Thousands of tired, nerve-shaken, over-civilized people are beginning to find out going to the mountains is going home; that wilderness is a necessity." – John Muir 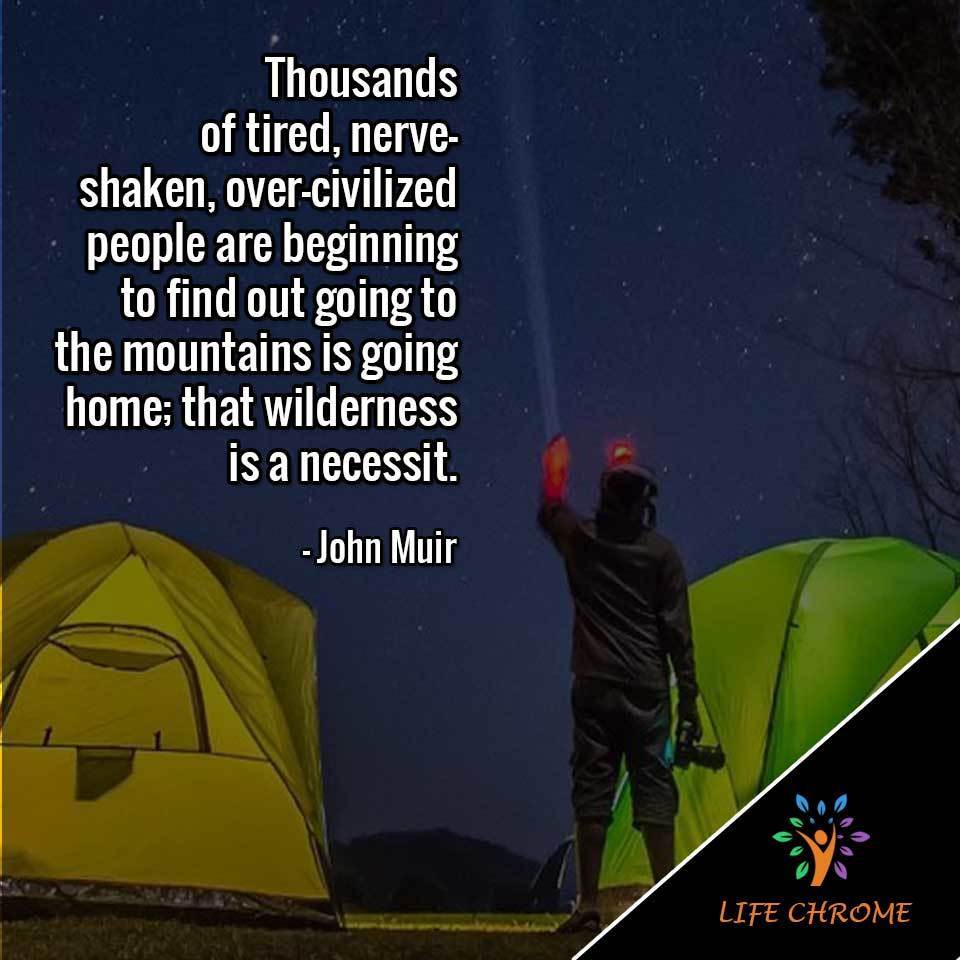 "The glories of a mountain campfire are far greater than may be guessed.... One can make a day of any size, and regulate the rising and setting of his own sun and the brightness of its shining." – John Muir

"Welcome to our campfire…where friends and marshmallows get toasted at the same time!" – - Unknown

"Jews don't go camping. Life is hard enough as it is." – Carol Siskind

"Even in a time of elephantine vanity and greed, one never has to look far to see the campfires of gentle people." – Garrison Keillor

"Weekend forecast: camping, with a chance of drinking." – Unknown

"Camping is something I’ve done all my life." – Stefanie Powers

"Camping is not a date; it’s an endurance test. If you can survive camping with someone, you should marry them on the way home." – Yvonne Prinz

"What on earth would I do if four bears came into my camp? Why, I would die of course. Literally shit myself lifeless." – Bill Bryson

"I would feel more optimistic about a bright future for man if he spent less time proving that he can outwit Nature and more time tasting her sweetness and respecting her seniority." – E. B. White

"In wildness is the preservation of the world." – Henry David Thoreau

"Nature has been for me, for as long as I remember, a source of solace, inspiration, adventure, and delight; a home, a teacher, a companion." – Lorraine Anderson

"A great many people, and more all the time, live their entire lives without ever once sleeping out under the stars." –  Alan S. Kesselheim

"I don’t always move to the other side of the campfire but when I do, the smoke follows me." – Unknown

"The stars were better company anyway. They were very beautiful, and they almost never snored." – David Eddings

"Wilderness is not a luxury but a necessity of the human spirit." – Edward Abbey

"And at the end of the day, your feet should be dirty, your hair messy and your eyes sparkling." – Shanti

"Do not collaborate with someone you would not go camping with." – Dan Poynter

"My camping days are over, but I might consider glamping." – Christine Feehan

"I went camping for 33 days, and now everybody seems to care. – Colleen Haskell

"When homeless people go camping, how do they know?" – Dana Gould

"She had the loaded handbag of someone who camps out and seldom goes home, or who imagines life must be full of emergencies." – Mavis Gallant

""A perfect day would be to get into the car, drive out to Yosemite and go camping." – Michael Steger

"The rite of passage of learning to build a fire that will burn all night with one match is not an insignificant one in my husband's family, and I grew up camping and backpacking. I love to camp." – Sarah Wayne Callies

"The real voyage of discovery consists not in seeking new landscapes, but in having new eyes." – Unknown

"I grew up camping with my family. We took so many trips. We had an RV, actually, when we were growing up. We did a ton of camping trips and went across the country." – Kirsten Lepore

"I go camping with my boyfriend having nothing other than ourselves and the birds to talk with is most relaxing." – Jamie Luner

"I've been camping and stuff, but if you left me in the woods I'd probably just curl up and cry until someone found me." – Norman Reedus

"Adopt the pace of nature: her secret is patience." – Ralph Waldo Emerson

"There’s a sunrise and a sunset every single day, and they’re absolutely free. Don’t miss so many of them." – Jo Walton

"Sleep under a blanket of stars, and your heart will forever be kept warm by your love of life." – Anthony T. Hincks

"Another thing I like to do is sit back and take in nature. To look at the birds, listen to their singing, go hiking, camping and jogging and running, walking along the beach, playing games and sometimes being alone with the great outdoors. It's very special to me." –  Larry Wilcox

"I was a Scout years ago, before the movement started, when my father took me fishing, camping and hunting. Then I was sorry that more girls could not have what I had. When I learned of the movement, I thought, here is what I always wanted other girls to have." –  Lou Henry Hoover

"Lake Pend Oreille is definitely my favorite place to be while in Sandpoint. I love to get out on a boat to enjoy water sports, camping, fishing, or just to relax and catch a sunset." – Nate Hollan

"I never camped as a kid, but I really got into camping and sleeping outdoors. I've also done some amazing river floats in New Mexico and Idaho. It's peaceful and awesome." – Conor Oberst

"My earliest memory from childhood is of fishing with my father. And I remember vividly we were in a store, and we were buying a pup tent to go on our first camping trip." – David Suzuki

"Most families like to spend time bonding over meals out, picnics in the country, maybe weekend camping trips - we take things to the extreme!" – Holly Branson

"I hate camping, but I love summer camp." – Zooey Deschanel

"Things work very differently in Bollywood. There is a lot of camping there." – Amruta Khanvilkar