In this post, you are about to know the quotes of Camille Paglia who is a popular author in America. She is famous for her book: Art and Decadence from Nefertiti to Emily Dickinson.

This scholar is current professor at the University of the Arts in Philadelphia, Pennsylvania. Besides her teaching career, she is also a critic of feminism. Learn more about Camille Paglia from Wikipedia. Let's start reading her quotes. and you can learn more Quotes....

High Romanticism shows you nature in all its harsh and lovely metamorphoses. Flood, fire and quake fling us back to the primal struggle for survival and reveal our gross dependency on mammoth, still mysterious forces.

Pursuit and seduction are the essence of sexuality. It's part of the sizzle.

Feminism is dead. The movement is absolutely dead. The women's movement tried to suppress dissident voices for way too long. There's no room for dissent.

My advice, as in everything, is to read widely and think for yourself We need more dissent and less dogma. 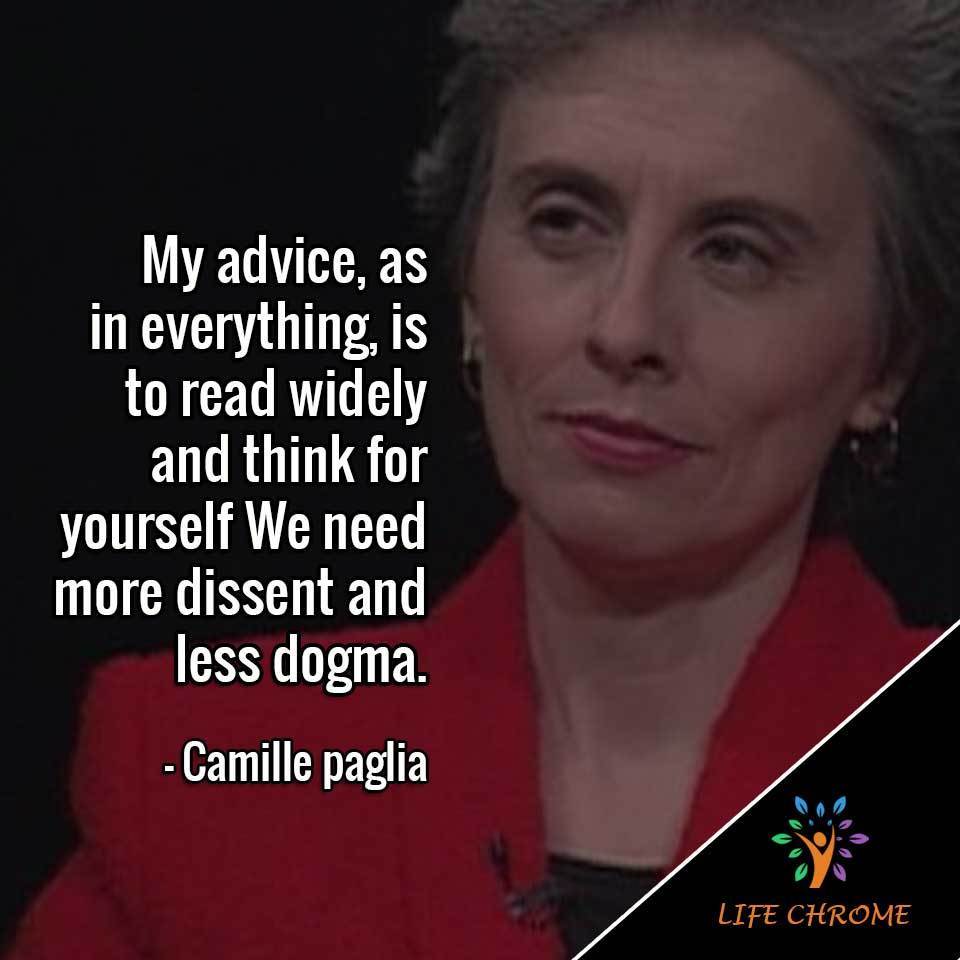 If feminism has receded in visibility and prestige, it is precisely because its vision of life's goals and rewards has become too narrow and elitist.

If civilization had been left in female hands we would still be living in grass huts.

Christianity began as a religion of the poor and dispossessed - farmers, fishermen, Bedouin shepherds. There's a great lure to that kind of simplicity and rigor - the discipline, the call to action.

Criticism at its best is re-creative, not spirit-killing.

The airheads of Congress will keep their own plush healthcare plan - it's the rest of us guinea pigs who will be thrown to the wolves.

Are we like late Rome, infatuated with past glories, ruled by a complacent, greedy elite, and hopelessly powerless to respond to changing conditions?

I don't like reality shows and have never watched them, but I'm addicted to 'Real Housewives' because it's authentic old-time soap opera reborn!

'Mad Men' doesn't capture one single thing about the decor, costumes, or sexual interaction. It is a total projection of contemporary snarky attitudes into the past.

My grandfather worked in a shoe factory - he was an Italian immigrant. My father was the first to go to college in the family.

It is capitalist America that produced the modern independent woman. Never in history have women had more freedom of choice in regard to dress, behavior, career, and sexual orientation.

Capitalism has its weaknesses. But it is capitalism that ended the stranglehold of the hereditary aristocracies, raised the standard of living for most of the world and enabled the emancipation of women.

My generation of the Sixties, with all our great ideals, destroyed liberalism, because of our excesses. 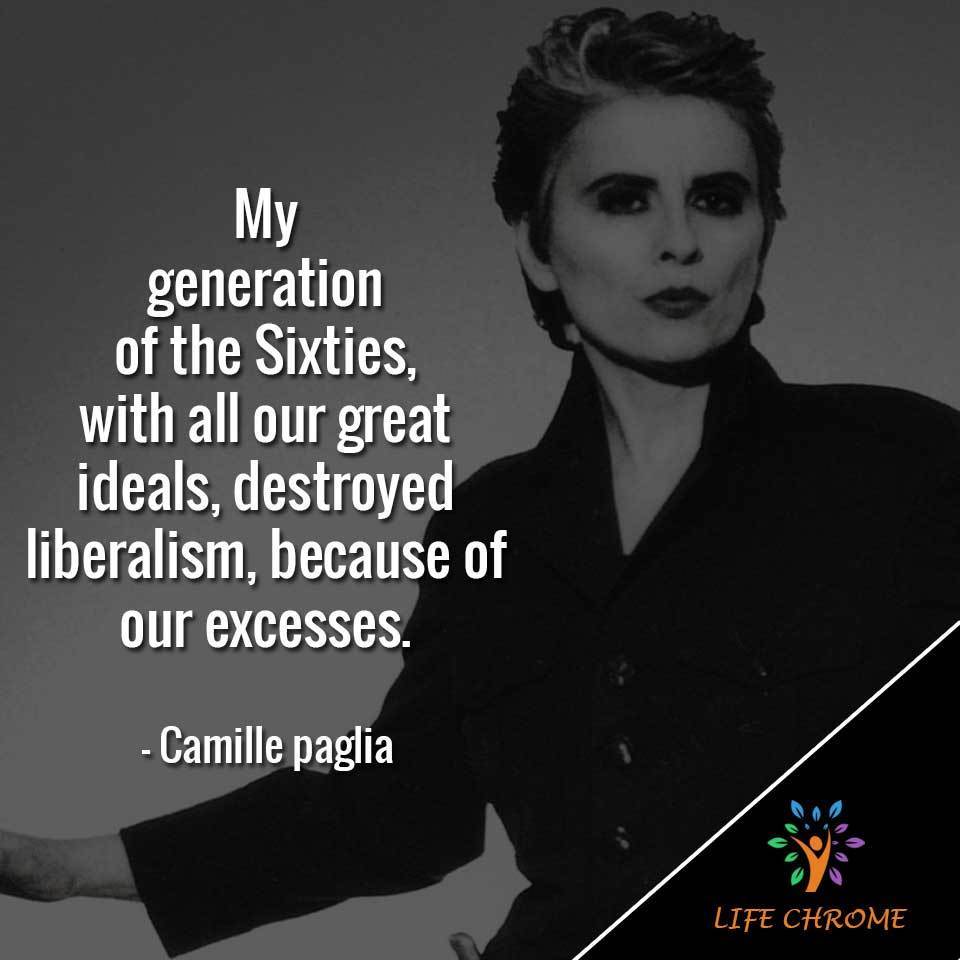 Leaving sex to the feminists is like letting your dog vacation at the taxidermist.

Beauty is our weapon against nature; by it we make objects, giving them limit, symmetry, proportion. Beauty halts and freezes the melting flux of nature.

Manhood coerced into sensitivity is no manhood at all.

Nature is always pulling the rug out from under our pompous ideals.

Although I'm an atheist who believes only in great nature, I recognize the spiritual richness and grandeur of the Roman Catholicism in which I was raised.

Education has become a prisoner of contemporaneity. It is the past, not the dizzy present, that is the best door to the future. 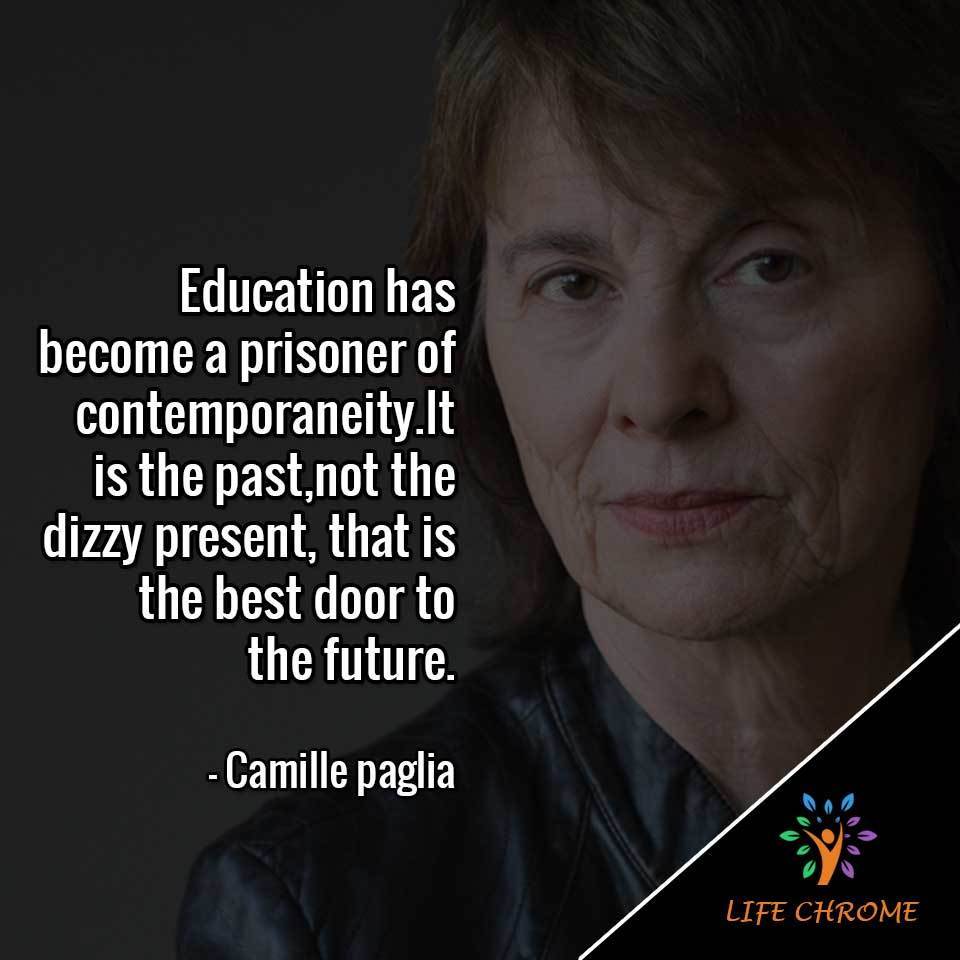 Uncritical American boosterism - automatic endorsement of every government action - is myopic and self-defeating.

Pornography is human imagination in tense theatrical action; its violations are a protest against the violations of our freedom by nature.

Woman is the dominant sex. Men have to do all sorts of stuff to prove that they are worthy of woman's attention.

Beauty is our escape from the murky flesh-envelope that imprisons us.

The only thing that will be remembered about my enemies after they're dead is the nasty things I've said about them.

Cats are autocrats of naked self-interest. They are both amoral and immoral, consciously breaking rules. Their ''evil'' look at such times is no human projection: the cat may be the only animal who savors the perverse or reflects upon it

We must accept our pain, Change what we can and laugh at the rest. 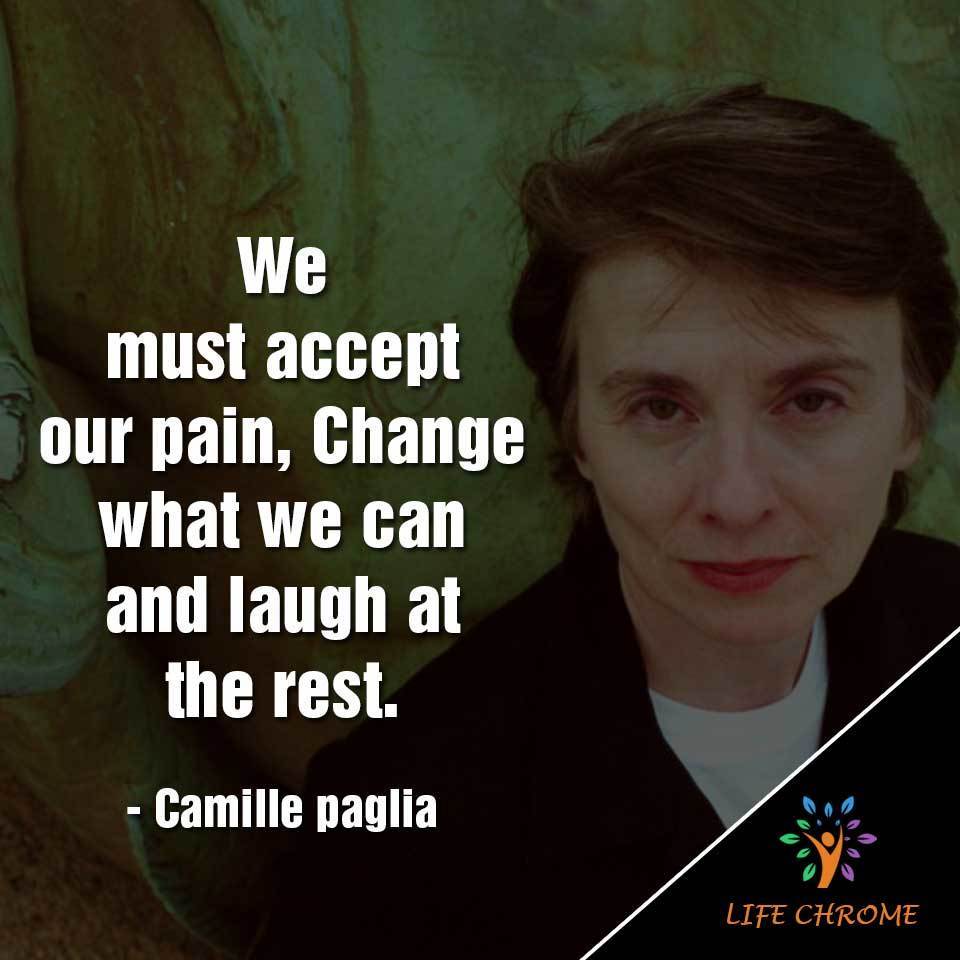 Anti-religious sneers are a hallmark of perpetual adolescents.

Western science is a product of the Apollonian mind: its hope is that by naming and classification, by the cold light of intellect, archaic night can be pushed back and defeated.

Though men may be deep, mentally they are slow.

I have a long view of history - my orientation is archaeological because I'm always thinking in terms of ancient Greece and Rome, ancient Persia and Egypt.

I've always felt that the obligation of teachers is to have a huge, broad overview and to provide a foundation course to the students. The long view of history is absolutely crucial.

Modern bodybuilding is ritual, religion, sport, art, and science, awash in Western chemistry and mathematics. Defying nature, it surpasses it.

Out with stereotypes, feminism proclaims. But stereotypes are the west's stunning sexual personae, the vehicles of art's assault against nature. The moment there is imagination, there is myth.

liberalism defines government as tyrant father but demands it behave as nurturant mother.

If people want to be better writers, they can't just read the blogs! You've got to look at something that's outside this rushing world of evanescent words.

The Earth is littered with the ruins of empires that believed they were eternal. 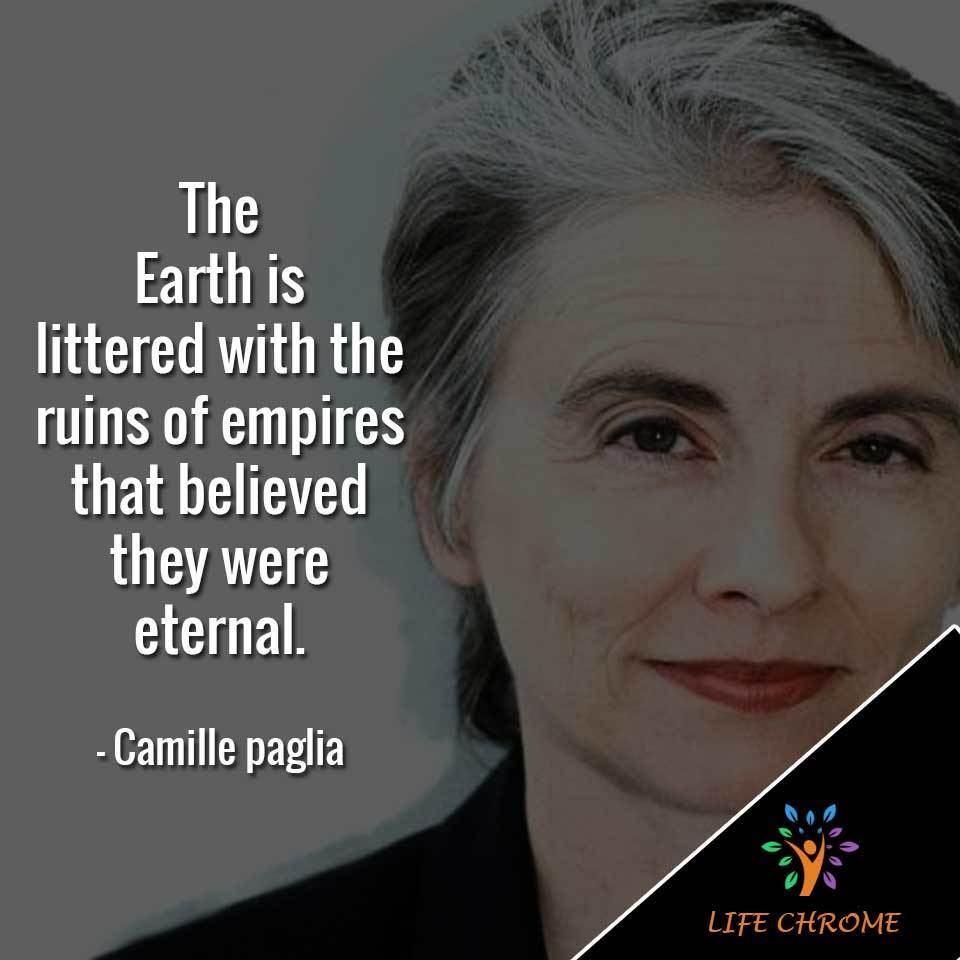 I remember turning 'The Sopranos' on once and within two minutes nearly throwing a brick through the screen.

I believe that everybody has the right to view his or her own body as a palette. However, I think intellectuals should at least try to be role models.

Music never dies. Do we really need another Madonna tour? Does she have to compete with women performers 25 years her junior?

My advice to the reader approaching a poem is to make the mind still and blank. Let the poem speak. This charged quiet mimics the blank space ringing the printed poem, the nothing out of which something takes shape.

Students are very gullible about the web. The only way you can really sort out information on the web is if you've had a prior training in book culture.

Men know they are sexual exiles. They wander the earth seeking satisfaction, craving and despising, never content. There is nothing in that anguished motion for women to envy.

Sotomayor's vainglorious lecture bromide about herself as 'a wise Latina' trumping white men is a vulgar embarrassment - a vestige of the bad old days of male-bashing feminism.

A woman simply is, but a man must become. Masculinity is risky and elusive. It is achieved by a revolt from woman, and it is confirmed only by other men.

In an era ruled by materialism and unstable geopolitics, art must be restored to the center of public education.